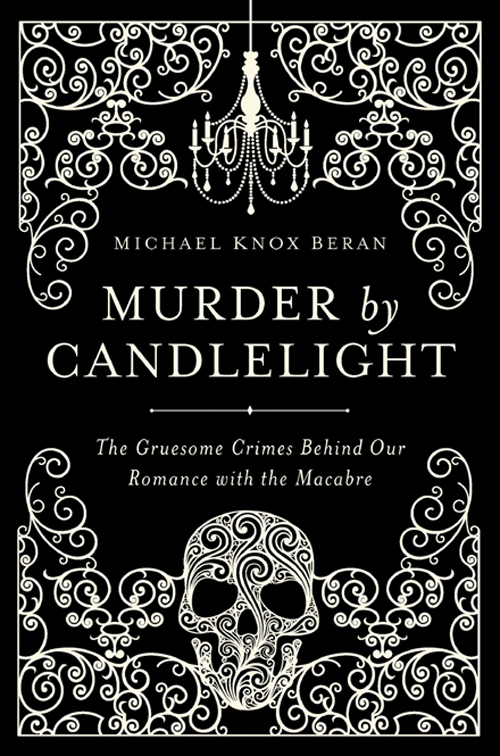 The Gruesome Crimes Behind
Our Romance with the Macabre

Very few can boast of hearts which they dare lay open to themselves, and of which, by whatever accident exposed, they do not shun a distinct and continued view. . . .

PROLOGUE:
Horror's Romance: From the Gothic Donjon
to the Metropolitan Blood-Sacrifice

PART ONE:
The Murder in the Dark Lane

PART TWO:
The Mystery of the Mutilated Corpse

PART THREE:
The Butler Didn't Do It: A Murder in Mayfair

PART FOUR:
Toward the Ripper

EPILOGUE:
The Decay of Murder

Lately I have found it a nocturnal refuge to read books of the early and middle nineteenth century: Skeats's edition of Chatterton, Dickens's
Life of Grimaldi
, Collins and Cruikshank's
Punch and
Judy
, Dyce's edition of Beaumont and Fletcher. . . . I like the atmosphere of English antiquities, the Gothic churches and the slang of old London, the clotted and cobwebbed prose . . . the murkiness and tangledness of texts that leave so much of the past mysterious.

I
n his essay “The Decline of the English Murder,” George Orwell opined that the classic period of English homicide began about 1850 and died away circa 1925. Reading the piece some years ago, I found myself inclined to disagree. Orwell conceived the classic murderer to be, like Dr. Palmer of Rugeley, Major Armstrong of Cusop Dingle, and that curious figure Dr. Crippen, a respectable, middle-class figure, the follower, perhaps,
of a learned profession, who brings about the death of an inconvenient person by means of poison. But surely the hygienic, frock-coated neatness of Orwell's classic murders, so far from marking them as masterpieces of the genre, was indicative of a degeneration of the form, the triumph of a bloodless, attenuated species of killing over the wilder and more impassioned varieties, with all their sanguinary Ã©lan. Also, the victim of a poisoner is often unaware that he or she is being murdered, a circumstance which deducts materially from the amount of horror such a case can excite.

Like a diamond, a murder shows best by candlelight. It seems to me that the age when murder was most “classical”âthat is, when it was most macabreâfell somewhat earlier than Orwell would have us think. The golden age of murder (if it is not unseemly to use such an expression in connection with such a subject) is, I am convinced, to be found in and around the quarter-century that elapsed between 1811 and 1837, an era bounded on the one side by the commencement of the regency of Prince George, afterwards King George IV, and on the other by the accession of his niece, Queen Victoria.

But how to justify this, what is to my thinking the
saeculum aureum
of murder, its Age of Gold? Certainly the atmosphere of the period has something to do with it, the ghastly, Gothic, and peculiarly English quality of an age in which candlelight gave way to gaslight and the mail coach to railwaysâan age of chop-houses and hackney coaches, when watchmen called “Charlies” cried the hours of the night and young harlots cursed like sailors in streets daubed with the soot of hell. Other ages, however, have scenes as ghastly to show; and if the murders of this period seem to me to have been especially lurid, the reason is perhaps to be found less in the acts themselves than in the impression they made, at the time, on sensitive and imaginative minds. It is less the quality of the crimes than the attitude of the age which determines the gruesomeness of its murders.

The killings described in this book took place in the high noon of Romanticism, when the most vital spirits were in revolt against the eighteenth-century lucidity of their fathers and grandfathers, those powdered, periwigged gentlemen who had been bred up in the sunshine of the Enlightenment, and who were as loath to descend to the Gothic crypt as they were to contemplate the Gothic skull beneath the skin. The Romantic Age, by contrast, was more than a little in love with blood and deviltry. It was an age that delighted in the clotted gore of the seventeenth-century dramatists, the bloody poetry of Webster and Tourneur and Middleton. “To move a horror skillfully,” Charles Lamb wrote in his 1808 book
Specimens of English Dramatic Poets Who Lived about the Time of Shakespeare
, “to touch a soul to the quick, to lay upon fear as much as it can bear, to wean and weary a life till it is ready to drop, and then step in with mortal instruments to take its last forfeit: this only a Webster can do.” Inferior geniuses, Lamb said, may “terrify babes with painted devils,” but they “know not how a soul is to be moved.”

The keenest spirits of this epoch in murder historyâSir Walter Scott, Thomas De Quincey, and Thomas Carlyle among themâknew a good deal about the horror that moves the soul. In their contemplations of the most notorious murders of their time, they saw “strange images of death” and discovered dreadfulnesses in the act of homicide that we, in an age in which murder has been antiseptically reduced to a problem of social science on the one hand and skillful detective work on the other, are only too likely to have overlooked.

For the student of history, the murders of a vanished time have this other value. An eminent historian has said that were he limited, in the study of a particular historical period, to one sort of document only, he would choose the records of its murder trials as being the most comprehensively illuminating. A history of the murders of an age will in its own way reveal as much of human nature, caught in the Minotaur-maze of evil circumstance, as your
French Revolutions, Vienna Congresses, and German Unifications. What a vision of the past rises up before us in these dark scenes, illumined by wax-lights and tallow-dips: and what an uncanny light do they throw upon our own no less mysterious, no less sinful present.

Horror's Romance: From the Gothic Donjon to the Metropolitan Blood-Sacrifice

A corpse, a bloody piteous corpse,
Pale, pale as ashes, all bedaubed in blood,
All in gore-blood. . . .

A
ll over England, people were looking to be scared out of their wits. The rage for being frightened to death began in the middle of the eighteenth century, when, in the high noon of the Age of Reason, Horace “Horry” Walpole, dilettante son of the Whig Prime Minister Sir Robert, grew bored of neo-classical sweetness and light. He was from an early age drawn to Gothic corpses and cobwebbery, and in 1764 he published, under a pen name, a novel called
The Castle of Otranto
, in which he whimsically evoked the very Gothic ghoulishness the reformers of his time were trying to forget.

The book created a new appetite, and England was soon awash in shudder novels. Tiring of the orderly parterres of Pope and Dr. Johnson, readers were drawn to the wilder literary gardens of such writers as Ann Radcliffe and William Beckford. Books like Mrs. Radcliffe's
The Mysteries of Udolpho
, in which the innocent heroine is cruelly immured in an Italian castle, and Beckford's
Vathek
, the story of the descent of an eastern potentate into a lurid hell, offered the reader glimpses of the exotic and the forbidden, and at the same time satisfied his craving for romances in which the sensuous and voluptuous passions were artfully mingled with the vicious and depraved ones.

Horror, after all, is scarcely horror without a tincture of warped eroticism, and as a rule the Gothic novelists laid their tales in the Gothic castle, and more especially in the Gothic donjon. Their readers ate it up, for they instinctively associated the castle with the more blood-curdling varieties of vice and licentious deviancy. A very pardonable assumption: castle pride has long been closely interwoven with castle perversity. From Caligula to Colonel Charteris, the “Rape-Master General of Britain,” the castle has been the locus classicus of erotic horror. The Marquis de Sade himself, blond scion of the Frankish knightage which in the Dark Ages gave aristocracy to Europe, could never have existed but for the rank luxuriance of his chÃ¢teau, with its hereditary right of domination; the feudal morbidities of the marquis who made a fetish of his pedigree were the whip and spur of the manias that drove the zealot of sadistic copulation.

In time, however, the Gothic formulas grew stale, and by 1817 the Gothic castle, with its trapdoors and spy-holes cut out of the eyes of ancestral portraits, had become insipid. In that year, Jane Austen published
Northanger Abbey
, a novel in which she mocked the Gothic genre as unreal. “Charming as were all Mrs. Radcliffe's works,” she wrote, “and charming even as were the works of all her imitators, it was not in them, perhaps, that human nature, at least in the midland counties of England, was to be looked for.”

Another assault, far more comprehensive than that of the eighteenth-century Gothicists, was by this time under way against the complacencies of the Age of Reason. A new generation had arisen to seek what Cardinal Newman called “a deeper philosophy” of the soul. The Romantic rebels sought to penetrate the depths of human nature less by means of analytical intelligence than through feeling and force of soul; and indeed one of their number, the East Prussian sage Johann Georg Hamann, went so far as to say that only “loveâfor a person or an objectâcan reveal the true nature of anything.”

The Romantics brought this ideal of sympathetic insight to bear on nearly every aspect of human life. In politics and statecraft, the Romantic revolution was inaugurated by Edmund Burke, who taught his disciples to perceive the hidden beauty of ancient customs and institutions, and to dread the “new conquering empire of light and reason” that threatened to destroy them. William Wordsworth ushered in a corresponding revolution in poetry, inculcating through his poems qualities of feeling and sentiment at odds with the artificiality of a society which he believed had grown deaf to the mystic language of nature and truth. Not less valuable was the Romantic effort to understand the nature of evil and to reinstate it in all its dark majesty as a fact of the human soul. To be sure, not a few of the Romantic poets dallied, in the first ebullience of youth, with the belief that man is born good and corrupted by institutions; but the push and thrust of the movement was always toward a recognition that sin is real and ineradicable. The demon-lovers of Samuel Taylor Coleridge's poems, the witches and gremlins and occult
gramayre
(magic) that haunted Sir Walter Scott's imagination, the young Thomas Carlyle's Diogenes TeufelsdrÃ¶ckh (“Devilsdung”), the protagonist of the dark fantasy
Sartor Resartus
, all bear witness to the Romantic conviction that the devil lives in each of us, feeding on the worms that fester in the vitals of our spirit.