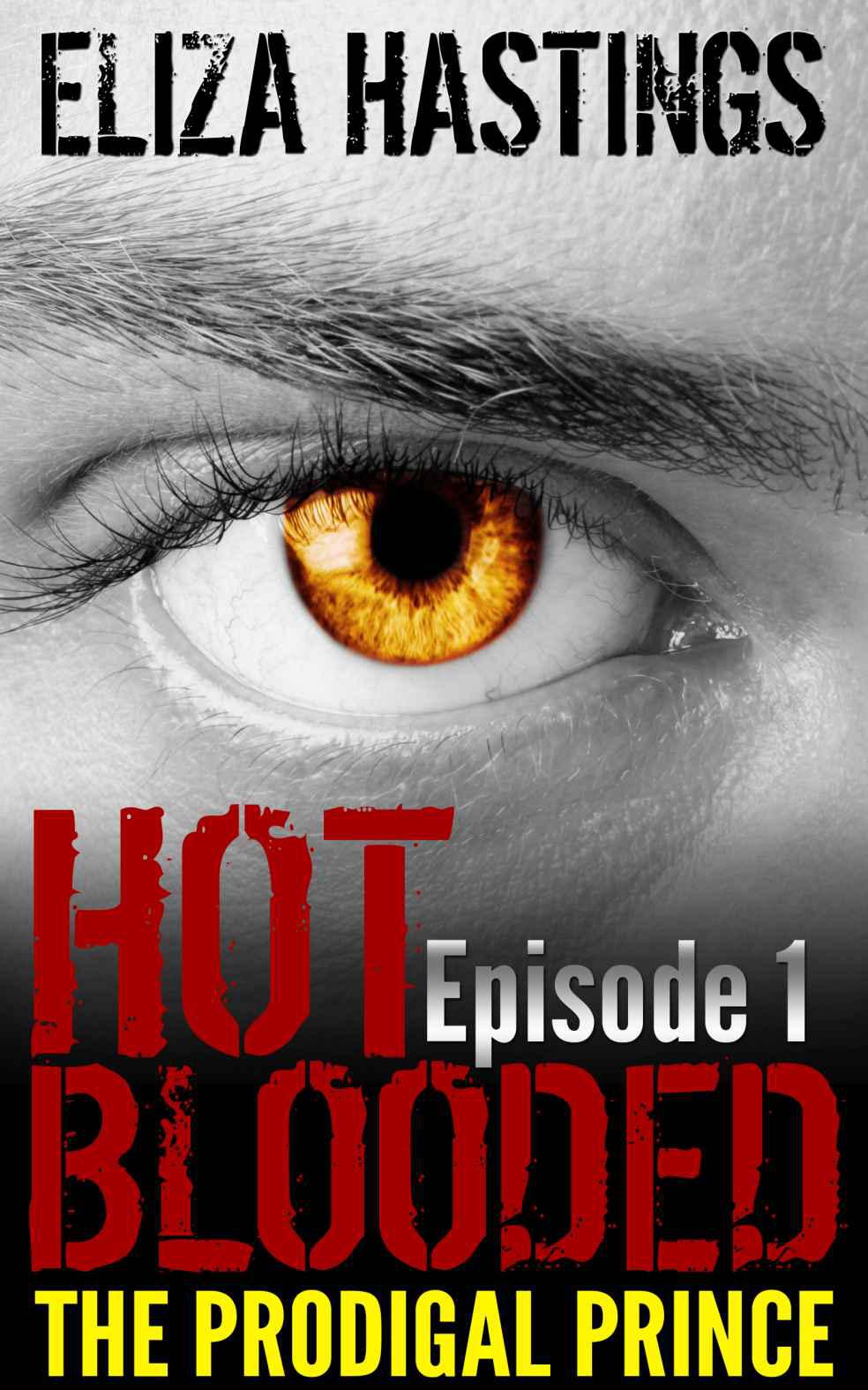 Episode 1 of the
Hot Blooded
Series

All rights reserved worldwide. No part of this publication may be replicated, redistributed, or given away in any form without the prior written consent of the author/publisher or the terms relayed to you herein - including photocopying, recording, or by any informational storage or retrieval system without express written, dated, and signed permission from Elizabeth Chen, except by a reviewer who may quote brief passages in a review to be printed in a newspaper, magazine, journal, website, or blog.  This book cannot be sold under any circumstances - you have only personal rights.

This story is a work of fiction and for entertainment purposes only.  Names, characters, places, and incidents are either the products of the author's imagination or are used fictitiously.  Any references to actual people, living or dead, events, organizations, locales, or business entities are unintentional or for illustrative purposes only.  There is no intent to falsely characterize, recommend, disparage, or injure, and it should not be so construed.
Enjoy the story!

The young water giant didn't have a death wish.  But there were just some people that he felt shouldn't be allowed to exist.  Especially not in his presence.

Taking a deep breath, he pushed open his wooden cabin door and stepped out into the sunlight.  He recoiled a bit from the warm beams on his face, then steadied himself with another deep breath.  “Look at me.  I’m not even under attack yet and I’m already jumpier than a freshly caught fish.”  He raked his fingers through his short white hair.  “The guy’s a third my height.  For fuck’s sake, he practically looks human.  I can take him, no problem.”

“Talking to yourself again, Tetslen?” his father said, clapping him on the shoulder.

The action caused Tetslen’s whole body to jump.  “Shit, you scared me.”  He choked out a chuckle.

“Not as much as you scared me, pal.  Save some air for the rest of us, why don’t you,” said Latrib.

Tetslen cleared his throat.  “What do you need, Captain?”

Latrib shrugged.  “Me?  Nothing.  Sunny skies, still waters...  What else is there to do besides harass my kid?”  He smiled and pressed his fist against Tetslen’s shoulder.

Tetslen smirked.  “That’s ‘first mate,’ to you.  And if you don’t have anything to do, there are always fish to be gutted.”

Latrib sighed.  “They grow up so fast.  Can’t believe you’re fifteen already.”  He looked Tetslen over and observed the way his snug clothing tugged against his limbs.  “Your skins are too small for you again.  We’ll have to go shark hunting soon.  Oh, right.”  He stood at mock attention.  “Sorry, sir, but your request cannot be fulfilled.  There are hardly any fish below deck since Kilar keeps blowing them out of the water.”

“And that doesn’t bother you?”  Tetslen’s blue eyes flashed.  “He’s cutting into our supply, and shown nothing but disrespect to you and the rest of the crew ever since he got on board.  Someone needs to throw him off this ship,” he finished, narrowing his eyebrows.

Latrib’s face turned even whiter than his shaggy hair.  “Tetslen, don’t joke about something like that.  You know as well as I do that he doesn’t take rejection lightly.  If he were really getting to be a problem, I would take care of it.”

“Captain, you’ve given him safe passage on this vessel four times, and his behavior gets worse and worse every time.  You’ve got to understand that he isn’t the same little boy you took in all those years ago.”  He lowered his head.  “Father, you’re a very understanding person, but this has gone on long enough.  If I don’t do something to protect this crew, I don’t know how I could keep calling myself a water giant.”  He raised his head, looking Latrib in the eye.  “Do I have your permission to do what needs to be done?”

“No, you absolutely do not.”  Latrib leaned in close to Tetslen, lowering his voice.  “Look, you don’t know the guy like I do.  You’ve never even seen him in action, which means you haven’t seen him at his worst.  It isn’t just his power that’s the problem.  He’s - ”

“Fucked more women than your baby blues will ever see in a lifetime.  Yes, ladies, he
is
that handsome,” came a loud voice from behind Tetslen.

Tetslen felt his blood run cold.  He whipped around and lowered his head to see his father’s guest.  Tanned bear hides tangled themselves around his body several times over, which he wore despite the increasing heat.  The skins were crudely fitted to the shape of his muscular body.  Around his neck was a tightly woven scarf with a deep red color.  It was made from dyed sheep wool that had become quite scratchy over the many years he had owned it.  The warmth of the clothing was magnified under the scorching sun.

However, his face looked anything but menacing.  His eyelids were drooping, and his dark skin took on a color as green as the ocean.  He reeked of hard liquor.  Despite the attempt to steady himself against the doorway with his hands, his body still swayed from side to side with the tide.

Latrib laughed.  “Oh yeah, you’re a real lady killer, all right.  I’m pretty sure that even prostitutes run in the other direction when you show your ugly mug.”

“Shut the fuck up, sailor.”  Kilar groaned, resting one had against his open door to keep from toppling over.  “You and your fucking all-male crew.  It’s probably a miracle that junior here was ever even born.”  He caught Tetslen staring at him.  “And just what the fuck are you looking at?”

Kilar staggered to the side rail of the ship and leaned against the sturdy poles that were as tall as young trees, yet twice as wide.  He steadied himself against them.  “I’m not fucking drunk.  The sea always does this to me.”  The feeling of the ship swaying to the rhythmic tide was almost too much for his stomach to take.  A fish that was larger than he was came writhing out of the water, attached to the line of a fisherman who was sitting on the rail.

“Damn, that’s a big one, Merkavo,” the bearded fisherman next to him said, patting him on the back.  “We’re gonna be eating like royalty tonight!”  The successful fisherman grinned, but Kilar noticed the swift glance that came in his direction.

Kilar turned up his nose at the fresh catch.  “Fuck me alive, that is the most horrible shit I’ve ever smelled in my entire life.”  He leaned over the boat in case he threw up, but this only put him into closer contact with the waters that were nudging the side of the boat.  He gagged.  “Actually, I take that back.  Comparing this to the smell of shit does a great injustice to feces everywhere.  If I had eaten any food in the past few days, I would shit myself senseless until I couldn’t smell this abominable stench anymore.”

“Thank all that is holy you aren’t obligated to eat any of it,” Latrib said.  “What brings you on deck anyway, Kilar?  I thought you hated the sight of the ocean during the day.”

“The sights, the sounds, the smells...  Yep, pretty much hate everything about it.  Doesn’t really matter if it’s day or night.  Although, it is worse to think that the sun has to subject itself to such sights.  Thank Rekanii Mount Rii isn’t anywhere close to this contaminated filth.”  Kilar spat at the water.  “But I’m serious about the smell of those Rekanii-awful fish.  Fuck, I could smell them even after I poured booze all over the floor in my room.  Nothing helps.  I just came out here to blow a few of them to pieces to cheer myself up.  The smell of those damn demon spawn is just too fucking depressing.”  His black eyes scanned the surface of the ocean for any signs of life.

Tetslen grit his teeth.  “Those ‘demon spawn’ are what nourishes and sustains this crew.  We’ve dealt with your rants every time you’ve stayed on this ship, but you’re going too far by destroying our main source of food.  Now we find ourselves with a shortage, when there would be more than plenty for everyone if it weren’t for you!”

Kilar spun around, his mouth wrenched open and his eyes narrowing up at Tetslen.  Despite the fact that Tetslen was a full-grown giant and Kilar was little taller than the average human, Kilar somehow still seemed to tower over him.  “You little ingrate!  Don’t forget whose land you’re on, fish-eater!  This is fire giant territory!”

“Hold on a minute,” Latrib said.  He stood in between Kilar and his son with his hands outstretched.  Kilar’s neck craned back to look him in the eyes, not bothering to shield his eyesight from the bright light of the late morning sun.

Latrib took a deep breath.  “Kilar, Tetslen’s right.  You’re out of control.  No hard feelings, but I think it would be best for everyone if we went ashore a little earlier than we planned.  There isn’t a place to pull in along the coast right now, but I can take you pretty close to the cliffs and have one of my men row you up to the rocks.”  As he said this, the two fishermen sitting on the rails shifted, averting their eyes from the conversation.

“Oh, come on, you’re not serious,” Kilar said.  “You practically raised me, Latrib.  Sure, I haven’t always been around, but that’s just because of your fish-worshipping heathen ways.”

“We’re not fish-worshippers,” Latrib said, “and I can’t just be there for you whenever you feel like walking all over someone.  I don’t regret taking you in, but I can’t allow you to take advantage of me or my crew any longer.  If we meet again, I hope we can remain friends.  I wish nothing but the best for you.”

Kilar brought his head down.  He stared off to the side, and his breaths became deeper and more frequent.  “You’re really kicking me off the ship.”

“Damn right, we are.”  Tetslen planted his feet in front of his father.  “You’ve abused the privilege of sailing with this crew long enough.  You should be grateful for the Captain’s benevolence.  If I were in charge, I would’ve thrown you overboard a long time ago.”

Kilar blinked.  He looked up at Tetslen.  “And just who the hell are you?”

Kilar stared at him.  “You’ve known me that long, yet you just threatened to throw me into the water?”

Latrib’s breath caught in his throat.

“Look,” Tetslen said, “I think we’ve been more than generous -"

“Shut your fucking mouth, you sack of shit!”  The loose ends of Kilar’s scarf trailed behind him as he leapt into the air.  He punched through Tetslen’s teeth, bits of the white shards falling to the ground while some pieces scratched the inside of Tetslen’s mouth and throat.  Latrib’s mouth dropped open to let out a frenzied yell.

Tetslen’s hands reached toward his mouth, and he grabbed onto Kilar’s legs.  Kilar felt him start to pull, so he grabbed a shard of tooth and stabbed it behind the bottom row of Tetslen’s teeth, keeping him in place.  Tetslen’s screams were distorted by the lack of shape to his mouth.  He thrashed his body about.

Latrib made a grab for Kilar, but Tetslen’s body jerked out of his reach when Kilar dug his white pick further into Tetslen’s gums.  “Stop moving, Tetslen!” said Latrib.

Kilar reached underneath his scarf with his left hand, pulling out a handful of small, red stones.