Read Murder in a Cathedral Online

Murder in a Cathedral 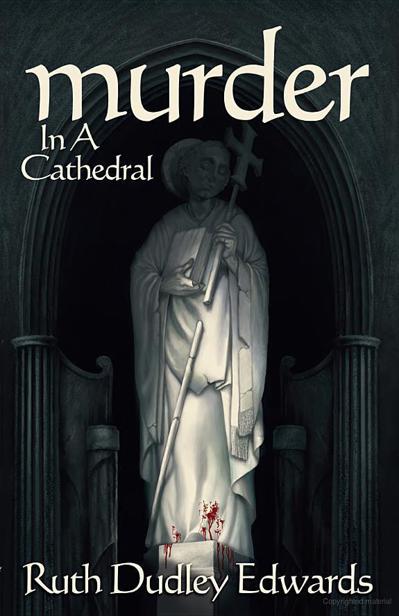 Murder in a Cathedral

AGAINST HIS better judgment, Robert Amiss lets the Baroness “Jack” Troutbeck persuade him to take a job with her friend Canon Flubert. He’s strapped for cash, and desperate enough to believe that, for once, her plans won’t lead to disaster.

Too late, Amiss realizes he’s stumbled into a maelstrom of scandal. The church is in an uproar over the appointment of the new dean, Norm Cooper, a fundamentalist American with a crazed wife. Cooper spells doom for the radical gay priests, feminist witches, and New Age cult members who have ruled the church for decades, and they aren’t about to take his appointment with a grain of salt.

When the dean turns up dead, Amiss and the Baroness are surrounded by suspects. To make matters worse, the Baroness insists on befriending every zealot, fanatic, and radical in sight, dragging Amiss through countless teeth-grinding adventures as they search for the killer.

THE SCHOOL OF ENGLISH MURDER

TRUE BRITS: INSIDE THE FOREIGN OFFICE

THE BEST OF BAGEHOT

HAROLD MACMILLAN: A LIFE IN PICTURES

PATRICK PEARSE: THE TRIUMPH OF FAILURE

AN ATLAS OF IRISH HISTORY

An imprint of St. Martin’s Press.

MURDER IN A CATHEDRAL
. Copyright © 1996 by Ruth Dudley Edwards. All rights reserved. Printed in the United States of America. No part of this book may be used or reproduced in any manner whatsoever without written permission except in the case of brief quotations embodied in critical articles or reviews.

Lines from ‘XVI’ by W. H. Auden in
The English Auden
edited by Edward Mendelson, are reproduced by kind permission of Faber and Faber Ltd.

Lines from ‘A Subaltern’s Love-Song’ by John Betjeman are reproduced by kind permission of John Murray (Publishers) Ltd.

Lines from ‘Buckingham Palace’ by A. A. Milne are reproduced by kind permission of Methuen Children’s Books

Lines from ‘Stately as a Galleon’ by Joyce Grenfell, published by Macmillan, are reproduced by kind permission of Richard Scott Simon Ltd.

First published in Great Britain by Collins Crime, an imprint of HarperCollins
Publishers

To Una, Chief Accomplice, and, of course, as usual, to John

As always, I had advice and help from countless friends, but special thanks are due to Andrew Boyd, Nina Clarke, Paul Le Druillenec, Gordon and Ken Lee, James McGuire, Neasa McErlean, Jill Neville (versifier laureate), Carol Scott, Julia Wisdom, my tough and tiny publisher, and my favourite dean (who had better remain anonymous).

In the interests of the plot I have taken some small liberties with details of customs and procedures in the Church of England – and particularly in the running of cathedrals.

Both read the Bible day and night,

But thou read’st black where I read white.

From ‘The Everlasting Gospel’

‘Of course you will.’

‘Give me one good reason why not.’

‘Because I don’t believe in God and I don’t much care for pomp and circumstance.’

‘What’s God got to do with it?’ Baroness Troutbeck sounded baffled. ‘We’re talking about the Church of England here, not some crowd of born-again fruitcakes. Nobody will be indelicate enough at this shindig to enquire as to whether or not you believe in God. Good grief, these days, in the good old C of E, that’s almost a disqualification for office.’

‘I’m not looking for office.’

‘Stop arguing. For Christ’s sake, Robert, all I’m doing is asking you to come to an amusing occasion and do me a good turn into the bargain.’

Amiss looked at her suspiciously. ‘What kind of a good turn, Jack?’

‘I won’t enjoy this without someone to snigger with and I’ve suddenly been left partnerless. I need a walker. That’s what they call blokes who act as escorts for women who don’t shag them, isn’t it?’

‘Do I gather you’re short of those who do? Have you and Myles had a lovers’ tiff?’

‘He’s got to go to the funeral of some old mate from the dirty-tricks brigade.’

The baroness grinned. ‘If I took Mary Lou, every red-blooded cleric – every heterosexual red-blooded cleric, that is, if there are any left in Westonbury, which I doubt – would be sniffing and slavering round her. I’d rather have someone unobtrusive.’

‘Thanks. You really know how to make a chap feel good. Makes me sound like a valet.’

‘Stop being temperamental. We’ve got quite enough of that ahead of us. And stop playing hard to get. It’s not every day you get invited to a ringside seat at a great British occasion. You’ve seen me ennobled; now you can watch David being episcopated, or whatever it is they call being bishoped. Besides, it’ll do you good to get away from this dump for a while.’

‘It’s not a dump,’ began Amiss indignantly, recognizing as he did so that he was letting himself get sidetracked. The baroness threw a disparaging glance around his living room; he followed her eye, as if he were a stranger, and took in the undistinguished furniture, the posters from undergraduate days that he’d never got round to replacing, the makeshift bookcase of planks and bricks, the Chinese paper lampshades and the sad, threadbare carpet.

‘If it wasn’t for the odds and ends you picked up in India,’ she said, waving at a few rugs and pictures, ‘this would be the appropriate background for a dreary 1970s sitcom about shiftless students.’

‘I took over the furniture from my predecessors,’ Amiss said defensively. ‘And as you well know, since then I’ve never simultaneously had the time and the money to get around to turning the place into a home. Anyway, what’s the point? I’ll be moving out when Rachel gets back.’

‘In three months. Beginning of June. It’s a bugger that it’s another postponement, but at least this time it’s definite.’

‘She’ll be staying in London?’

‘For the next few years at least. So she’s given notice to her tenants and I’ll move in with her.’

‘Oh, good, good.’ She sounded vague. She looked at her watch and vigorously knocked out her pipe. Plutarch, who had been slumbering peacefully on the baroness’s stomach, started, yowled and propelled her vast marmalade body to the floor.

The baroness looked unsympathetic. ‘Stop being neurotic, Plutarch. As for you, Robert, you’d better get moving. I’ll have to put my foot down hard if we’re going to make Cambridge in time for dinner.’

‘Rubbish. By your own admission you’ve nothing to do until some job applications bear fruit. If they ever do, that is. Now stop being coy. You’ll have an enjoyable few days in Cambridge and we’ll take off on Sunday at sparrow-fart for Westonbury. Besides, you can have a loving reunion with Mary Lou.’

Amiss looked at her sternly. ‘These days my feelings towards Mary Lou are entirely platonic. Just because you put it about at every opportunity doesn’t mean that the rest of us behave similarly.’

‘Good God, Robert, I’m not going to throw you back into bed with her.’ She leered. ‘I prefer her to be in mine. But you’ll enjoy seeing her. Now come on, go and pack your Sunday suit and some clean knickers, stop being such a prig and say yes to life.’

‘When you drag me into anything it usually means death.’

‘For heaven’s sake, man, this is the Church of England we’re talking about. They may be having their differences in Westonbury, but they haven’t taken to rubbing each other out. Yet, anyway.’

‘You should bully for Britain,’ he snarled, as he headed for the door.

She smirked. ‘I do. Now, where’s Plutarch’s basket?’

‘I don’t need to take her. I can get a neighbour to do the necessary for a couple of days.’

‘Better to take her. It’ll be nice for her to see old haunts.’

‘I thought she was a
feles non grata
at St Martha’s.’

‘They’ll put up with her for a short time. And Mary Lou actually likes her, so she’ll be looked after while we’re in Westonbury.’

‘Oh, all right then. You feed and water her and get her equipped for the voyage while I change.’

Plutarch, who had just jumped back onto the baroness and was draping herself around a particularly comforting curve, found herself unceremoniously dumped on the floor. ‘Right, old girl. Let’s get cracking.’

Amiss, who had frequently suffered the rough edge of Plutarch’s tongue and claws for much lesser acts of
lèse majesté
, looked on resentfully as the animal stretched, yawned and then followed the baroness obediently into the kitchen.

As their speed was reduced to a slow crawl in the queue for the M11, the baroness reached down to her left and picked up a receiver.

‘You’ve got a car phone,’ said Amiss disdainfully. ‘How vulgar!’

‘Vulgarity doesn’t frighten me.’ She punched in some numbers. ‘It’s me. Get me Mary Lou.’

‘Do you ever say hello or goodbye?’

‘It’s called manners. But then, I forgot. You don’t have any.’

‘Has he arrived? Good. Take him for a run or something to give him an appetite for dinner… Yes, got him… Within the hour.’

‘You seem to regard the place as your own personal fiefdom.’

Dirty Angel (Sainted Sinners #1) by Vivian Wood
Shadow of the Blue Ring by Jerome Kelly
Diggers by Viktors Duks
The Prince: Jonathan by Francine Rivers
No More Heroes: In the Wake of the Templars Book Three by Rhoads, Loren
The Chosen by Sharon Sala
Song of the Fireflies by J. A. Redmerski
Pickers 4: The Pick by Garth Owen
Unlocked by Karen Kingsbury
A Winter's Date by Sasha Brümmer, Jess Epps