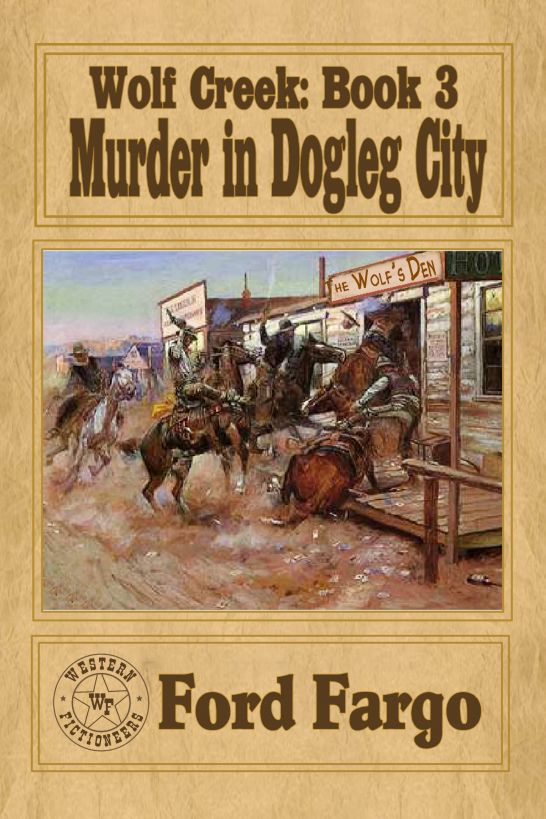 A Western Fictioneers Book published by
arrangement with the authors

No part of this book may be reproduced in any
form or by any electronic or mechanical means including information
storage and retrieval systems, without permission in writing from
the author. The only exception is by a reviewer, who may quote
short excerpts in a review.

This book is a work of fiction. Names,
characters, places and incidents are either products of the
author’s imagination or are used in a fictional manner. Any
resemblance to actual incidents or locales, or persons living or
dead, is entirely coincidental.

Printed in the United States of
America 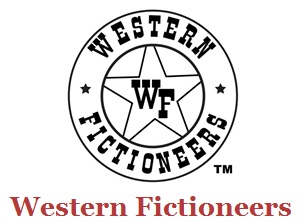 Beneath the mask,
Ford Fargo
is not one
but a posse of America's leading western authors who have pooled
their talents to create a series of rip-snortin', old fashioned
sagebrush sagas. Saddle up. Read
‘
em Cowboy! These are the legends
of
Wolf Creek
.

THE WRITERS OF WOLF CREEK, AND THEIR
CHARACTERS

Appearing as Ford Fargo in this episode:

In Wolf Creek, everyone has a
secret.

That includes our author,
Ford Fargo—but we have decided to make his identity an
open
secret. Ford Fargo
is the “house name” of Western Fictioneers—the only professional
writers’ organization devoted exclusively to the traditional
western, and which includes many of the top names working in the
genre today.

Wolf Creek is our
playground.

It is a fictional town in 1871 Kansas.
Each WF member participating in our project has created his or her
own “main character,” and each chapter in every volume of our
series will be primarily written by a different writer, with their
own townsperson serving as the principal point-of-view character
for that chapter (or two, sometimes.) It will be sort of like a
television series with a large ensemble cast; it will be like one
of those Massive Multi-player Role-playing Games you can immerse
yourself in online. And it is like nothing that has ever been done
in the western genre before.

You can explore our town and its
citizens at our website if you wish:

Or you can simply turn this page, and
step into the dusty streets of Wolf Creek.

Just be careful. It’s a nice place to
visit, but you wouldn’t want to die there.

Laird Jenkins had been in so many
saloons, gambling dens, and houses of ill repute across the West
that he couldn't even begin to remember all of them. Sometimes it
seemed to him that he had spent his entire life breathing in the
distinctive yet dubious perfume blended from tobacco smoke, stale
beer, whiskey, piss, unwashed human flesh, bay rum, and cheap lilac
water.

One thing he knew: the dens of
iniquity here in Dogleg City, the less savory area of the
settlement known as Wolf Creek, weren't any different from the ones
he had visited elsewhere, with one or two exceptions.

The place he was in at the moment,
Asa's Saloon, was one of those exceptions. It was owned by a black
man, something you didn't see every day. Many of the clientele were
black as well, but not all—there were a handful of Mexicans and a
few white men who looked down on their luck. Not the sort of place
Laird would normally choose to drink in, but he wasn’t really there
to drink. He was there to do a little business with Asa Pepper.
That business wasn't concluded yet, but Laird thought he had made a
good start on it.

Without saying good night to anyone –
there wasn't anyone in here that he would want to strike up a
social conversation with, as Asa’s customers tended to be the dregs
of the town – Laird left the saloon. He paused on the boardwalk
just outside to take a deep breath of the night air and clear some
of the saloon fumes from his lungs. He was about to head toward the
Imperial Hotel, ready to turn in for the night, when an
overpowering urge struck him. He turned the other way, toward the
nearby alley, and started fumbling with the buttons of his
fly.

Damn, he told himself, he wasn't old
enough to be plagued like this. He ought to have a few years left,
at least, before he started having to hurry these things or else
he'd piss his britches.

The darkness of the alley folded
around him. He got himself set, ready to relieve his bladder. And
then, wouldn't you know it, the blasted thing went balky on him and
refused to do anything.

With that to worry him, he almost
didn't hear the faint noise of someone moving behind him. Laird
didn't particularly like the idea of being disturbed at his
personal business like this, and he knew as well that robbers often
lurked in alleys near saloons, lying in wait for unwary drunks. His
hand moved slightly toward the butt of the Colt on his
hip.

But maybe it was nothing. A cat or a
rat. Or maybe Asa Pepper had followed him from the saloon, deciding
that he wanted to hear more of what Laird had to say about how they
could both make some money.

“
Mister Pepper?” Laird
said without looking behind him. “Is that—”

The muzzle flash split the darkness. A
blink of orange flame, there and then gone, and as it lit up the
alley something smashed into Laird's back, a hammer-blow almost
perfectly centered between his shoulder blades. It drove him
forward off his feet. His face smashed into the hard-packed dirt of
the alley floor. A fierce pain expanded through him, followed by an
even more terrifying numbness. In that brief moment while Laird's
muscles still worked, he managed to roll onto his back. Dying in an
alley behind a saloon was bad enough. Dying with his face in the
dirt and shit and trash of that alley was worse.

Laird tried and failed to draw air
into his lungs. Everything was slipping away from him, and he
wished he could breathe in that heady saloon fragrance once again,
just one more time, just . . .

It was not long past daylight. The
morning sun slanted low over the rooftops of the buildings,
layering the town with its early light. Deputy Marshal Quint Croy
sat at his desk in the marshal’s office—it had been a long
night.

Quint was twenty-five years old, tall,
with sandy hair and steady gray eyes. He had a prominent, beaklike
nose—a frequent target for punches, but it had survived many
assaults. His manner of dress and the way he carried himself
indicated he had spent more time as a cowboy than a
lawman.

And indeed he had. Quint Croy had
worked as a drover for six years before he came to Wolf Creek. He
had been on four trail drives from Texas to Kansas—the final one
had ended tragically, for one of his best friends had been shot
dead in a low class Abilene saloon, in a meaningless
fracas.

Another saloon patron, insulted over
an imagined slight, had drawn on the unfortunate cowboy. Quint had
tried to intervene, but was struck from behind just before the
shooting began. He had only a brief glimpse of the killer—the man’s
face bore a dollar-sized birthmark beneath several days’ worth of
whiskers. The beard over the birthmark showed white. Quint had
implored the local law to go after the man, who left town in a
hurry. His cries went unheeded. The killing was deemed
self-defense, even though the victim’s gun never left its holster.
Quint had done some investigating of his own—the lateness of the
hour and the general intoxication of all the saloon patrons left
memories hazy. Quint reluctantly left Abilene when his money ran
out.

Sickened by his friend’s murder, and
burned out on trail drives, Quint wandered into the growing town of
Wolf Creek. It was a wide open place—the railroad brought herds up
from Texas, which in turn brought an influx of hell raising drovers
into town. In turn, the constabulary had to increase in order to
handle the bedlam. When Quint learned of an opening for deputy
marshal, he cleaned himself up, rundown boots and all, and applied
for the job.

Marshal Sam Gardner had warmed to the
idea of hiring a man from outside the area. That way, he later
explained, there would be no favoritism, or appearance of it, when
it was necessary to arrest men from any of the local ranches. The
interview had gone well—Gardner seemed to like Quint’s demeanor,
and though Quint had no previous experience, his knowledge and
understanding of drovers would be a definite asset. The marshal
explained he could teach the young man what he needed to get
started, and the rest he could learn as he went—that was how
Gardner had done it. He swore Quint in and gave him a
badge.

For Quint, the job served two
purposes. First, of course, he was broke and needed the job— he was
near the point of having to sell his horse for eating money.
Secondly, though, he would be in a perfect position to administer
some delayed justice, should the man with the white-patched face
show up in Wolf Creek.

The Love Affair of an English Lord by Jillian Hunter
The Day of Battle by Rick Atkinson
The Once and Future Spy by Robert Littell
stargirl by Jerry Spinelli
Bird in Hand by Christina Baker Kline
One Letter by Lovell, Christin
Deadline in Athens by Petros Markaris
Into the Sea of Stars by William R. Forstchen
Seduction: Book 4 (Strong Young Women Series) by Jordan, Joyce
Teasing Jonathan by Amber Kell