Read Murder in the Dorm Online

Murder in the Dorm 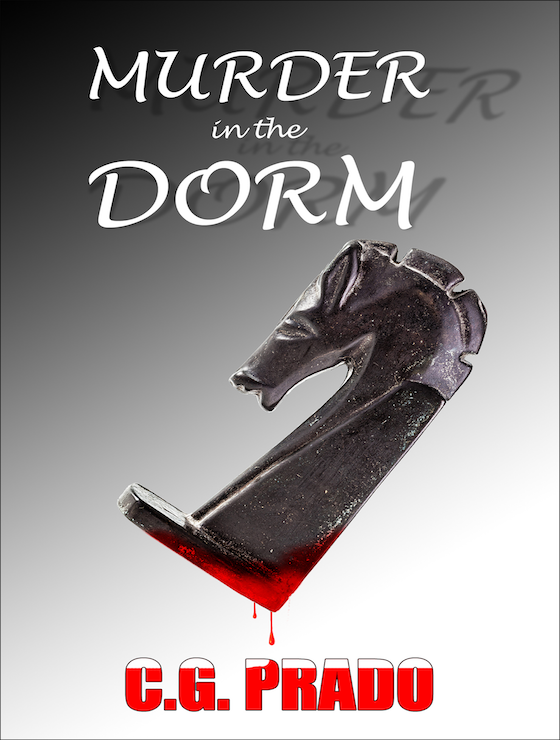 MURDER in the DORM

All rights reserved. No part of this book may be reproduced without written permission, except for brief quotations to books and critical reviews. This story is a work of fiction. Characters, businesses, places, and events and incidents are either the product of the author’s imagination or used in a fictitious manner. Any resemblance to actual persons, living or dead, is purely coincidental.

Chapter 40: The Thirtieth and Last Thursday

Charlie Douglas was still getting used to his new office. At the end of the Fall term the philosophy department had moved into the new Lipson Hall. His office was smaller than the old one, but had a good view of the campus and even a bit of Lake Ontario. What Charlie regretted was that unlike his old office, which was at the end of a long hall and distant from the department’s main office, the new one was just one door down from where the secretary and administrative assistant held court. Still, the view was worth the noise in the hall made by students waiting to hand in papers or needing to see someone about the gross unfairness of their latest mark.

On Wednesdays Charlie had no classes and this morning he was finishing a second cup of coffee, steeling himself to start work on a new paper he planned to do. His door was open, as usual, and he almost choked on a mouthful of coffee when Detective Pam DeVries appeared in the doorway.

“Hello, Charlie; I hope you remember me?”

It had been two years since Charlie was involved with DeVries and her partner, Dan Bolster, in solving the murder of a colleague, Barrett Wilson, and a related killing (
Murder at the Break
). DeVries looked as good now as then.

“Of course I remember you. Come in; sit down. Coffee?”

“Thank you, but no to the coffee. I won’t take much of your time. I’m afraid that my new partner, Guy Matson, and I are here on business and I wanted to ask you a question. Before I start, though, I need to say that when Professor Wilson was killed and we first met, you were a great help with the case but I told you too much about our investigation. This time around I need to be more careful. I’m up for promotion and I don’t know Guy as well as I knew my old partner. I’m telling you this so you won’t be offended or puzzled by my reticence.”

“I understand completely. We did get the killer, though. I just wish we’d found out what happened to those rare books.”

“I know, that bugs me, too, but we got the killer and that’s what matters. Now, let me ask my question: did you know a student in Computing Science named Kevin Kelsey? He was in his last term before graduating in the Spring. Kelsey was found dead in his dorm room early this morning.”

“No, I didn’t know him. If he did take one of my courses, I’ve no recollection of it. Let me ask our secretary to check, if you have a minute?”

Rather than picking up the phone, Charlie went to the main office and asked Jodie Anderson, the department secretary, to look up Kevin Kelsey, mentioning that Kelsey was a senior. Her routine reaction told him that she’d not yet heard about Kelsey being found dead, as he feared she might have. Charlie hadn’t wanted to ask her about Kelsey on the phone if she’d heard. She’d also remember DeVries, so the detective must have found his new office without asking Jodie where it was.

“Sorry, Dr. Douglas, he’s not listed in your past courses. Let me try others.”

Back in his office, Charlie informed DeVries that Kelsey had taken only one philosophy course, but with Barrett Wilson.

“So we won’t get any information on Kelsey from this department. Okay, let me tell you what I can because I’m hoping you’ll ask your colleagues about Kelsey and pass on anything we can use. As I said, he was found in his dorm room this morning. The medical examiner’s preliminary estimate is that he died between eleven last night and one this morning. He was struck on the head. The medical examiner thinks that was the cause of death, but we won’t know for certain till the autopsy. Nothing seems to have been disturbed in his room, so it wasn’t a robbery. It looks like a bad argument gone wrong. There was no sign of a struggle, so the blow was probably a surprise to Kelsey. He was struck with a heavy bookend we found by the body. The other bookend was still on the bureau near where the body fell, adding to the impression that this was a spontaneous thing and not premeditated.”

“I take it you’ve not had time to track down a motive or get the names of possible suspects?”

“No; we’ve been processing the crime scene. Now I have to go back to headquarters, but I thought I’d drop by in case you might have known something about Kelsey. I almost didn’t find you, by the way; I first went to your old building.”

“Yes; we moved here at the break between terms. I’ll ask around about Kelsey and get back to you. And good luck with the promotion.”

DeVries thanked Charlie and left. He sat and pondered, his projected paper forgotten. What struck him was that within a couple of years, Meredith University, an elite private institution, had been host to two on-campus homicides, Barrett Wilson and now Kevin Kelsey. He had mixed feelings about this second killing. He felt relieved not to be involved, but also disappointed he wasn’t involved. He checked the time and was glad to see that lunch wasn’t far off. Perhaps someone at the Club table would know something about Kelsey. With that thought Charlie forced himself to concentrate on his new project.

At a few minutes to twelve Charlie locked his office and took the stairs to the first floor. Going out of Lipson Hall he was again impressed with the building’s well-planned layout. The back of Lipson Hall had the usual parking area, but the front was nicely landscaped and the view from the entryway, like that from his office, allowed one to see Lake Ontario. Lipson was on a small rise that sloped down to the other buildings and, eventually, the lakeshore. The Faculty Club was one of the smaller buildings between Lipson and the lake, and Charlie now had a shorter walk to lunch than he’d had before. Well, Meredith could afford to pay for good architects.

Though it was barely past noon when Charlie got there, the Club table had half of its fourteen seats taken, six by regulars and one by Marcela Reilly, a petite and talkative M.D. Charlie had known for years but who usually had a sandwich in her office and went to the Club only if she had a guest. Charlie guessed why she was there and wasn’t disappointed.

“Well, Charlie, going to tell us about Meredith’s latest ‘incident’?”

“That what you all have been talking about?”

“What else? Everyone’s heard, but I’m sure you know more about what happened, given your history.”

“Well, an hour and a half ago our department secretary still hadn’t heard about it. I did have a detective ask me if I knew the student, but I didn’t learn any more than that he’d been killed.”

“So you do know more. Some of us heard a body had been found in one of the dorms, but it might have been an accident or an overdose.”

Several others concurred and they all looked expectantly at Charlie.

“Okay, unlike a couple of years ago, I’m being careful. All I’ll say is that the student was killed. His name was Kevin Kelsey. He was in his fourth year in Computing. I didn’t know him. Anyone here have him as a student?”

“Kevin Kelsey? Yes. Kelsey was in my class last year. He took my course on the history of science. He seldom spoke and was getting mediocre marks. He never approached me outside of class. All I know that might be useful is that he seemed close to an exchange student from St. Andrews, a guy named Lawrence McDermott who also took the course. I get a sprinkling of computing types along with the usual physics and chemistry students.”

The speaker, Evan Jones, was new to the history department. Charlie knew him only to nod hello to, but what he’d said about Kelsey’s friend would interest DeVries.

Talk over lunch continued but Charlie learned nothing more. When he got back to his office he called DeVries. She was out, so he left a message with McDermott’s name and mention of Jones, Charlie’s source. He then tried to concentrate on his paper.

Meredith University, having wisely passed on becoming a publicly supported institution, had flourished and attracted students as good as the best Ivy League schools. Despite its wealth and a large number of annual applications, Meredith kept its enrollment at twelve thousand. The main objective was to maintain an enviable staff-student ratio and to insure that students had ready access to their instructors and as much personal attention as possible. This policy paid off in three important ways: Meredith had a sterling reputation, its alumni were well above average in terms of career success, and they proved very generous to the university.

Charlie finally admitted he was too distracted, so he might as well go home. He shut down his laptop, slipped it into his briefcase, and went to his car. When he got to their town house, or what was called a row house in less desirable neighborhoods, he found Kate, his wife, sitting in the living room. She obviously had been waiting for him.

“I heard on the news there’s been another murder. You’re going to get involved, aren’t you?”

“No. I did get a visit from Pam DeVries but she only came to me to see if I’d known Kelsey. Now, would dinner out put you in a more conciliatory mood?”

Kate was clearly not mollified but went for her coat.

Charlie woke early and a bit out of sorts. The night before he and Kate discovered that Sandoval’s, their favorite restaurant in Kingsford, had closed since their last visit. The sign on the door had been uninformative, thanking patrons and expressing regret for the need to close. The front window was papered over and a “For Lease” sign made it final. Charlie and Kate had decided to just go home. Charlie had opened an expensive bottle of California chardonnay for consolation purposes and they’d made do with left-over salmon croquets. They’d gone to bed without mentioning Meredith’s latest homicide.

As usual, Kate didn’t wander into the kitchen until Charlie had finished his morning coffee and muffins and was getting up to shower. It was with some surprise that Charlie realized, as he was getting into his car, that he’d not given Kelsey’s death a thought since his brief conversation about it with Kate and their going off to the dinner they never had. That would soon change.

Here for You by Wright, KC Ann
Zombiez! by OJ Wolfsmasher
A Christmas Gone Perfectly Wrong: A Blackshear Family novella (B 0.5) by Cecilia Grant
Aunt Dimity Takes a Holiday by Nancy Atherton
Dear Boy: The life of Keith Moon by Tony Fletcher
Jaded by Tijan
The Tommyknockers by Stephen King
Blonde and Blue by Trina M Lee
The Rebels of Ireland by Edward Rutherfurd
The Ponder Heart by Eudora Welty