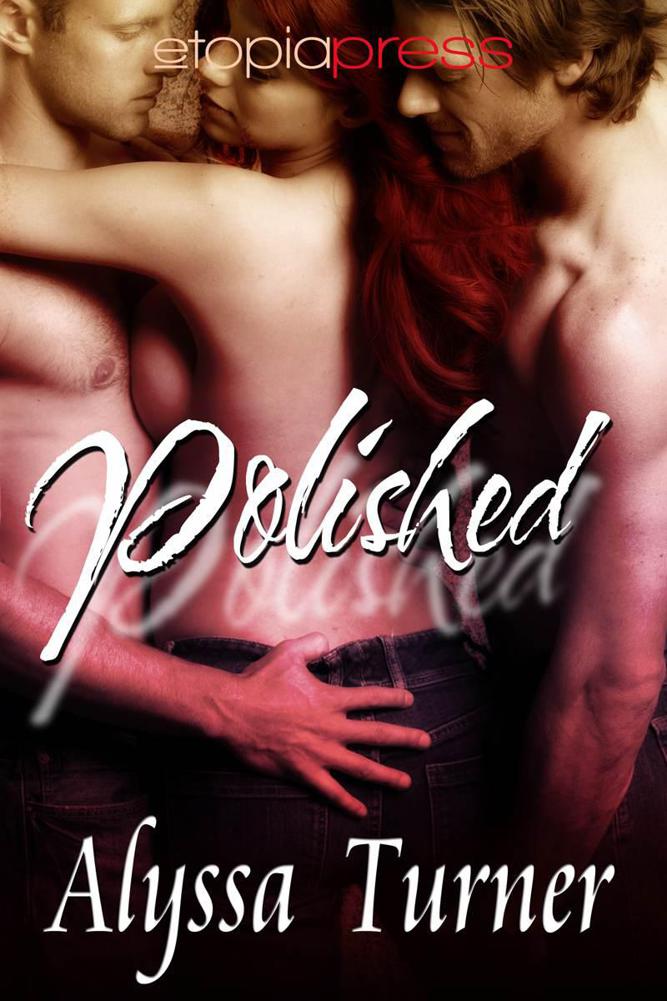 ~ Look for these titles from Alyssa Turner ~

“Ms. Turner enchants her audience with an easy flowing and energetic writing style…
By Surprise
is a short sizzler capable of enveloping you in the warmth and wonderment of love. …[A] short, provocative, tantalizing narrative…”

“Turner’s two heroes are hot. They are each a force to be reckoned with… If you love dystopian reads, seeing the hero/es struggle between their mission and their woman, then pick this book up. It has heat, it has steam, and it has substance.”

~ Look for these titles from Alyssa Turner ~

(Part of the
Surprised by Seduction
Collection)

If it had been any sunnier out, the butterflies flitting over the meadow would have spontaneously combusted. Rolling hills in the near distance were lush with life, pure emerald green against a textured backdrop of pine trees crowding the mountain.

Spencer let out a sigh and smiled. A rare summer breeze cruised across the back deck. “Tell me again why I let you do this?”

Rory snickered. “Because you love me, Spence, and you want to indulge my every wish.”

“Oh, yeah. That’s right.” Spencer reached for a piece of her auburn hair to twirl around his finger.

“Stay still, or you’ll make me mess it up,” Rory warned, holding his foot a little more firmly and steadying her hand.

“Why purple this time?”

She shrugged. “It was on sale.” She rested her bare foot high on Spencer’s thigh and wiggled her toes. “I like the color, don’t you?”

Rory flashed Spencer her toothiest grin. Most men would never let their girlfriend paint their toenails. Spencer’s weekly pedicures started after one too many rude awakenings in the middle of the night. There’s nothing sexy about a hangnail stabbing you in the leg. It was a pedicure or the couch, and Spencer told Rory he had no intention of sleeping away from her. What started as a joke had evolved into an intimate ritual, a secret all their own.

Spencer pressed his ruddy lips together. “Not just tomorrow, babe, all month.”

“All month!” Rory dunked the brush back into the paint pot. “What kind of overtime lasts all month?”

“Baby, that’s a lot of cash. I’m not about to let the city give it to someone else. Mayor is all over the news promising that new subway station will be done by next summer.”

Rory huffed. A month’s worth of overtime was a lot of money. Lord knew they could use it, but double shifts meant she’d hardly ever see him. “What time are you leaving tomorrow morning?”

“Early, before you even think to wink, lazybones.”

She paused. “It’s Sunday. Are you still going climbing?” Spencer never missed his day to get up high on the mountain.

He gave her a crooked look. “I was…you want to come?”

“Okay, but I’m sore from working in the garden yesterday. I’ll only slow you down.”

“Slow is good sometimes,” he said, grabbing Rory around the waist and pulling her into his lap.

She snuggled into his chest, intending to stay curled up there until the purple lacquer was set; the idea of his dressed-up toes inside his work boots tickled her to no end.

The lazy morning drifted by, with homemade waffles dunked in coffee and the two of them trading newspaper sections at the kitchen table. Rory watched the sun pouring through the window catch Spencer’s chestnut mop of hair, revealing subtle natural highlights any woman would kill for. He needed a haircut, or so he would say, but Rory always preferred him to look a little disheveled. It suited him, the relaxed freedom a little scruff and mussed hair gave him. If she wanted a buttoned-down corporate type, she’d have stayed with her ex. Spencer wasn’t anything like her ex, and it was one of the reasons she loved him.

By afternoon they were dangling from the side of the Shawangunk Ridge. Rory dug her toe in and clipped her carabiner like Spencer had taught her. Her muscles screamed, but when she looked back down at Spencer’s encouraging smile, she couldn’t help but smile back.

“We’re almost there, baby,” Spencer said, as if he knew she’d come close to her limit. Rock climbing was
his
passion, but Rory was game for whatever Spencer was passionate about. That smile alone was enough to make her want to do just about anything.

“I know we’re almost there,” Rory shouted down to him. “I was just checking to see if I was moving too fast for you.”

He laughed hard. The baritone of his chuckles echoed in the expanse of the valley below. “Big talker, huh?”

She smiled back. “All I know is I’m up here and you’re down there.” Of course he’d let her go first and had kept a slow and steady pace behind her, keeping a watchful eye on her, making sure she was safe. Fifty feet in the air, Rory wouldn’t have expected him to be any less protective than usual.

Spencer’s phone rang, marring the moment. The blasted thing was permanently glued to his hip. A promotion to foreman three months ago meant he was on call more than he wasn’t. He tapped his speaker button. “Hartley here.”

Rory couldn’t make out the voice calling him, but if he’d answered, he must have been expecting an important call.

“Yeah, Jack,” Spencer continued. “I got the notification. But I thought we were going in with three teams. Two is cutting it tight.”

Rory pressed on and up. She wanted to make it up to the top by the time Spencer disconnected. After five minutes talking to Jack Rothman, Spencer would be sure to appreciate a distraction, and Rory knew just the thing.

Spencer’s voice sounded strained as he swallowed the words he really wanted to use. “Yes, I got it. I’ll make the calls.”

Gritting her teeth, Rory tugged her herself to the top and got ready.

When at last Spencer hauled himself over the ridge, aggravation had wiped the smile right off his face. Then he noticed Rory. She was leaning back on her hands, with her legs propped up in front of her, dead center in Spencer’s line of sight. She’d managed to shimmy out of both her harness and her shorts and waited naked from the bottom down, save for her climbing shoes.

Spencer shook his head, his lip quirking into the start of a grin. This was exactly why he loved Rory so goddamn much. He’d dated plenty; he’d had his share of whirlwind weekend trysts that didn’t last to Monday night football. Rory had changed all that three years ago without even trying. That was the best part. She’d only had to be herself—sweet, impulsive, and up for anything. Their afternoon climbs often ended up like this, with Spencer dropping his chalk bag and gear off his square hips and heading directly between her creamy thighs. The chance of being discovered was slim on this part of the ridge, but if he knew Rory like he thought he did, the idea that someone might catch them in the act set a fire in her core.

Rory’s head lolled, tipping toward her shoulder. The two long braids she wore were splayed across her ample chest. She had gorgeous tits, though he often wondered if she knew it. The simple crew neck T-shirt stretched across them looked disarmingly innocent above her brazen nudity. Spencer’s cock sprung to life in his shorts.

“Couldn’t even wait for me to spread out the blanket this time?” Spencer said, crawling up between her knees. She was sitting on her shorts, the warmth of the sun-baked rock no doubt toasting her bare ass through the cotton fabric. Inches away from her, he sat up on parted knees and shrugged off the lightweight knapsack that held their usual necessities for a leisurely sprawl on top of a mountain.

By My Hands by Alton Gansky
Playing God by Kate Flora
Shadow Wrack by Kim Thompson
After Ariel: It started as a game by Diana Hockley
To the Last Man I Slept with and All the Jerks Just Like Him by Gwendolyn Zepeda
A Chink in the Armor by D. Robert Pease
The German Numbers Woman by Alan Sillitoe
Skyfire by Mack Maloney
Grendel Unit 3: Fight the Power by Bernard Schaffer
Worth the Risk by Melinda Di Lorenzo