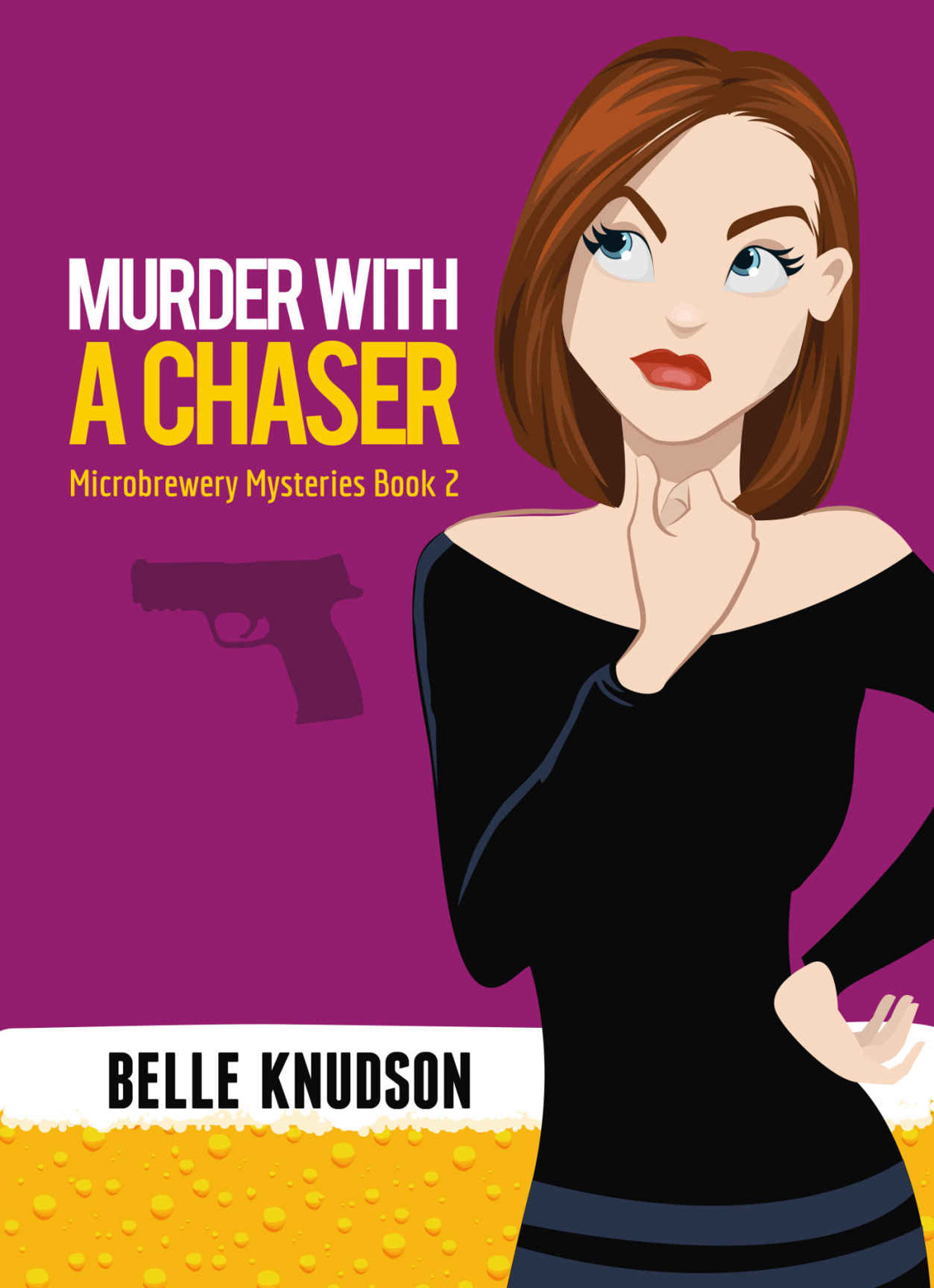 MURDER WITH A CHASER

If you're heading to Carl's Cove for the weekend anytime after Memorial Day, best to leave on a Thursday. Unless, of course, you don’t mind sitting in traffic for three hours. That's not an exaggeration. Three hours. One hundred and eighty minutes. You see, for some reason that will one day be explained to us by our highly advanced alien overlords, Route 27 suddenly bottlenecks from three lanes into one about two miles outside of town. And it stays one lane for the rest of the way.

If you're anything like me, Madison Darby, then by the eighteenth minute of sitting in the alimentary canal of a million-wheeled worm, you start having visions of extremely creative suicide.

So take my advice and leave on Thursday. Find yourself someone to stay with or book a B&B.

It was the beginning of peak season, mid-June, and already there were reports of operatic expressions of road rage coming in from the outskirts of town. It didn’t help that the First Annual Hamptons Food and Wine Expo was being held here in Carl's Cove. All week, high-end restaurants that never bother to print prices on their menus were charging twenty-five bucks a pop for a three-course meal. Local vendors were everywhere sampling their wares. And on this day, Saturday, yours truly had the honor of acting as a judge in the homebrewing championship contest.

Homebrewing beer as a hobby was more popular than ever. And in no way had that proved to be truer than the turnout for this year's contest. There were about a hundred entries, all from the eastern end of Long Island. A panel from the American Homebrewers Association had whittled that number down to five finalists, one of whom would be crowned Hamptons Homebrewer of the Year at our event. And, before a large audience in Bay View Park, I and three other people sat in judgement of the hapless five.

I sat second from the left. At the far right was Pamela Tweed, a local journalist with a penchant for covering the antics of celebrities passing through Carl's Cove. Next to her, to my right, was Francesco "Frankie Meatballs" Fortino, head of the frozen meatball racket known as Fortino's Italian Classics – found in every working mom's freezer from here to California.

To my left sat Eli Campbell.

You may have heard of Eli Campbell. The British chef-turned-TV personality was our special guest celebrity judge. Tall, charismatic, incredible blue eyes and a shock of red hair that was closely cropped. But not one of those was his most outstanding quality. No, if you'd ever seen Eli Campbell on TV, you'd know what that was: his penchant for profanity. Viewers of his hit show,
Save This Place! –
wherein the redheaded chef would go to a failing restaurant and release a tirade of the most ungodly cursing this side of a David Mamet play – were treated to an ear-splitting barrage of bleeps that made up ninety percent of the show's audio track. In person, Campbell was true to form. He cursed the way regular people blinked – involuntary and quick. It seemed to come from a place other than his throat, as if he had some robotic cursing frog in his pocket programmed to go off every fifteen seconds. My father, a former military man, would have loved him. I, on the other hand, get a bit turned off by excessive cursing – preferring a well-placed "fudge" or "oh, sugar!" in place of R-rated alternatives. So when Eli Campbell greeted me, and he let loose with his potty mouth, I pictured the little robot frog in his pocket going
ribbit
.

"Hello, love," he said, and kissed me on both cheeks, European-style. "How the
ribbit are you?"

"Very well, Mr. Campbell. So nice to meet you."

It got old real fast.

Before the judging was to begin, we had a chance to mingle with the finalists. I'll try to sum them up quickly.

First, there was Peter Ashton, a twenty-five year old shy type with an advanced case of teenage acne. He looked like a puppy in search of its mother, wide-eyed and wary of strangers.

Next, Maisie Ward. I was happy to see a woman amongst the finalists, as I was happy to know that almost fifty percent of the original entries consisted of women homebrewers. I felt a little bit of a kinship with Maisie, and tried not to let that bias my judgement. She flirted with Eli Campbell a bit and was a bit more outgoing than I would have been at her age – the low end of her thirties.

Next we had Joe Badger. A helluva name for anyone. Particularly because Mr. Badger seemed to be trying to live up to it at every turn. When I turned to talk to Pamela Tweed about her shoes, Joe Badger was there suddenly, commenting on his size eleven loafers and how the arches were terrible for his problem feet. When Eli Campbell was being interviewed by a local news team for a 6:55 fluff piece, Joe Badger was casually milling about in the background, edging closer to the camera, ostensibly hoping for a shot at local stardom before being vigorously, if belatedly, waved out of the frame by the director of photography.

Finalist number four was Maurice Carr. I didn’t get to talk to Maurice much. He seemed sullen. He was pudgy and had a permanent frown wrinkling up his forehead. I felt sorry for him. Not even finalist in a homebrewing competition could take those wrinkles away.

And finally, there was the Reverend Howard Simmons, an online-ordained minister of a non-disclosed faith, but one who wore a collar and talked the talk, blessing us all with a flamboyant showmanship upstaged only by Eli Campbell's natural showbiz presence – and even more natural swearing.

Once things got underway, we wasted very little time in getting down to business. The stage was set, and Eli Campbell gave a very funny (I hate to admit it) speech peppered with a Scorsese-film vocabulary. The crowd was there for him, no doubt, not to see a local homebrewer get his or her shot at fifteen minutes of fame. I was happy at least to have Darby's Microbrewery, the brewery my dear old dad began so many years ago and the one I now found myself in charge of, as the official sponsor of this day's event. We had samples pouring freely, and sold even more pints' worth of brew. It was beautiful. Or, rather,
brew
tiful. I couldn’t have been happier.

As I sat next to Mr. Eli Campbell, I couldn’t help but notice how clean he was. He smelled like expensive soap and rich aftershave. I'm a bit of a germ freak and hate nothing more than a guy who can’t keep himself groomed to the point where he isn’t harboring a petri dish of bacteria on the surface of his skin. Campbell's skin glowed with health and vibrancy – and round-the-clock TV personality attendance.

But despite the healthy and handsome appearance radiating from the man, it was obvious that the radiation occurred merely from the surface. Underneath, Eli Campbell had a heart made of charcoal.

Nowhere was this more evident than during the judging process, when Mr. Campbell seemed to forget that he was the guest judge in a local homebrewing contest, and instead thought he was back on his Fox show.

Peter Ashton was first up with a Southern English Brown Ale, a roasty concoction with notes of coffee and chocolate that rolled sweetly and thickly over the palate.

"My God," exclaimed Eli Campbell. "This is
ribbiting
dreadful. I fought in the
ribitting
Gulf War, yeah? And every day we had to put coffee grounds in our
ribbiting
helmets and pour boiling water into them. That was our
ribbiting
morning coffee, and I'm telling you now that it was better than this
ribbit
."

And in case you didn’t get the impression from that, here’s a sampling of the others:

– "Darling, I wouldn't give this
ribbiting
beer to my dog if he was a
ribbiting
alcoholic and it was the last drop on Earth."

– "This is like the
ribbiting
liquid equivalent of a visit to your grandmum's funeral."

And of course, my favorite: "This doesn’t even warrant a
ribbiting
comment."

Did I mention that we were supposed to be positive in our critiques? These were finalists, for heaven's sake.

The crowd loved it. This is what they were there for, and Eli Campbell gave them their money's worth.

I watched in horror as our contestants shrank under his vitriol. The rest of the judges, bless their hearts, were kind, acknowledging, as I did, that it was a most difficult task to choose one outstanding beer from five outstanding ones.

Still, there was something about Chef Campbell's expletive-laden rants that superseded all our positivity and cast a gloom over the proceedings, in the eyes of those of us who were closest to it: The brewers and my fellow judges. In the bright sunlight and cool bay breeze on this gorgeous Saturday afternoon, it may as well have been overcast with black clouds and thick, electrified air portending meteorological catastrophe.

We sampled the entries once and commented, then sampled them again during a short break as we cast our votes. During this second run, Campbell disappeared into the trailer he had supplied for himself during the proceedings. He was brooding when he went in – and he went in quickly, like a man in great need – then emerged fresh, a smile on his face, a bounce in his step, and kind words from his mouth for all of us. More than one of us suspected what kind of self-medication Campbell may have been administering in those three minutes inside the trailer.

The announcements were made and the crowd reconvened. I'd warred with myself over my choice, but I really believed Maisie's delicious Bohemian Lager was the best of the bunch – a silky-smooth, refreshing quaff of flowery goodness in a glass. Nothing more to be said other than that it was a perfect example of the style, and that I was considering hiring her as an assistant brewer. Apparently I wasn't alone in my conviction; all four of us voted unanimously.

"And the winner is," said the Honorable Robert H. Collins, Deputy Mayor of the Carl's Cove Board of Trustees, as he peeled open the envelope revealing our decision.

He never got to finish his sentence.

Eli Campbell had slumped in his chair next to me, and then tumbled out onto the ground. Someone exclaimed, and then a chorus of voices arose from the crowd. Deputy Mayor Collins' head jerked around looking for the source of the commotion. And a bunch of folks rushed over to Campbell's body, which lay on the ground in a heap. I was the first one down there, not out of any sense of courageousness – I was confused and flabbergasted at first, I mean, how often does someone just keel over next to you while your serving on a board of judges in a homebrew competition? – but because I was the closest to him. Soon, a flood of people was upon me.

A chaotic din arose as people shouted to give him air and to call a doctor and so forth.

But even after a minute of CPR, thanks to those two years when I worked as a lifeguard in college, I knew almost immediately that they were all wasting their breath.