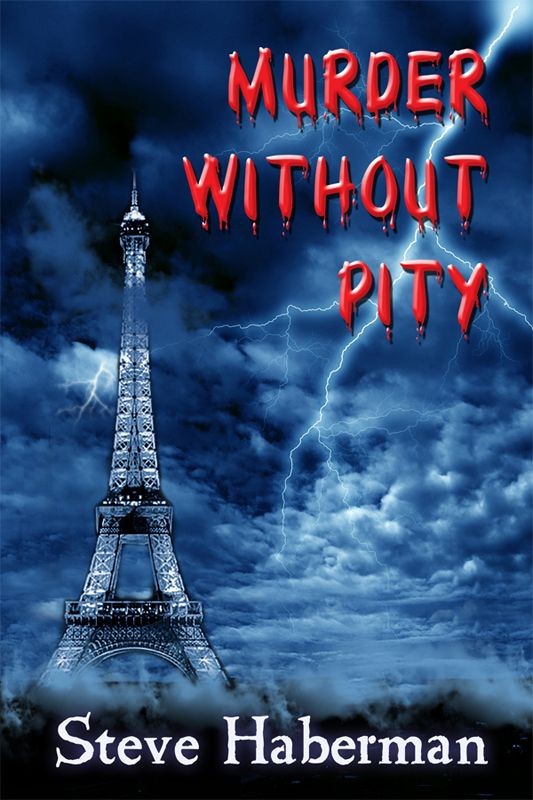 Praise for Murder Without Pity

CHAPTER 3 - A CALL FOR MONSIEUR BOUCHER

CHAPTER 4 - BENEFIT AT THE HOTEL

CHAPTER 5 - HATRED HAS NO HOME HERE

CHAPTER 6 - A DEATH IN THE FAMILY

CHAPTER 7 - VIEW FROM A WINDOW

CHAPTER 9 - A NIGHT OUT ON THE TOWN

CHAPTER 12 - SO MANY YEARS, SO MANY LIES

CHAPTER 18 - SUNDAY IN THE PARK

CHAPTER 25 - THREE HORSEMEN OF THE APOCALYPSE

CHAPTER 30 - I WANT THE BORDERS CLOSED

Praise for an earlier hard back edition of
Murder Without Pity

“…brilliantly paints a picture of haunting suspense…the most innocent walk, the

Discover other titles by Steve Haberman at www.parismurdermysteries.com

Darkness and Blood
coming next year

This ebook is licensed for your personal enjoyment only. This ebook may not be re-sold or given away to other people. If you would like to share this book with another person, please purchase an additional copy for each recipient. If you’re reading this book and did not purchase it, or it was not purchased for your use only, then please return to Amazon.com and purchase your own copy. Thank you for respecting the hard work of this author.

In memory of my parents, Ruth and Joseph Haberman. For their love. For their values. And also for their inheritance.

In another lifetime, it seems, I began writing
Murder Without Pity
. At that point, I had little knowledge of the French criminal justice system. Through correspondence with the Palace of Justice in Paris, I was able to meet an examining magistrate, Monsieur Jean-Paul Albert, who, taking time from his hectic schedule, patiently explained the intricacies of his work.

For reasons of dramatic license, I’ve simplified some aspects of a criminal investigation. That simplification and any errors are my responsibility.

I have, however, taken no leeway with some events, which are tragically true.

One final note: All facts are true as of the occurrence of this story.

The two men jumped Stanislas outside the burned-out apartment building, and he realized he had made a mistake. He raised his cane to strike, but it was too late. They muscled him up a flight of stairs and into a drafty room, and then they got serious.

The one with the German accent threw him hard onto a stool, making Stanislas cry out from pain that spiked up his bad leg. Next the accomplice yanked his arms behind, and he went to work, and everything went dark.

And afterwards, when Stanislas jerked to struggle loose, the man with the accent clamped a hand on his shoulder and warned in French, “Monsieur Cassel, don’t.” This warning frightened Stanislas even more. This stranger, who had helped ambush him, knew his name.

“Monsieur Cassel,” the man continued, “you are a powerful examining magistrate here in Paris. You have investigated and solved many crimes. You know the high and mighty and have even indicted some. But you do not sit in your Ministry of Justice Annex office. And you cannot command the police to rescue you. You are in an abandoned tenement, alone and powerless. Our house rules: Not a word, please. I talk. You listen. You answer. A simple shake of your head for a ‘no.’ A simple nod for a ‘yes.’ House rules, as I said, because we cannot waste time. Understand?”

And Stanislas, through his shock at having walked into a trap, just nodded. House rules.

The man with the accent squeezed his shoulder hard. “Luc has roped your hands behind you. Understand?”

“He has blindfolded you. Understand?”

“He has taken away your cane. Briefly, monsieur, you are our prisoner. Do you understand how serious your situation is?”

A cell phone beeped. Luc answered on the second ring, as though, Stanislas guessed, expecting the caller. In the near silence, as Luc listened, someone somewhere outside in the fog pounded an angry beat on congas. Through the throb, Stanislas could hear behind him Luc mumble words that sounded like code. Something about bringing the car around. About keeping the headlights low. Do this, Luc ordered. Do that. And Stanislas thought, they’re going to kill me.

Luc flipped shut his cell with a harsh click. He had finished chatting. “Three minutes,” he said. “Now what, gag him?”

“At this hour, Luc? Who would hear him? Monsieur Cassel, listen carefully. House rules, remember? You have an interrogation tomorrow afternoon at your Justice Annex office. Yes?”

They knew not just his name and profession, but where his office was, Stanislas realized. He nodded yes.

“Your witness to question, the esteemed Monsieur Louis Boucher?”

They had somehow gained access to confidential information too, he saw. Yes.

“You will question the esteemed Monsieur Boucher about the murder of the pensioner Léon Pincus. Agreed?”

“You will go easy on Monsieur Boucher.”

Not a request, but a demand. Stanislas hesitated.

The man with the accent clapped him on the side of his head. “I said, go easy on him, please. Do not be stubborn. Save your crime fighting heroics for someone else. What time did he leave his apartment that morning? Does he take his strolls daily? Was he terrified when that Monsieur Pincus confronted him? You see? Easy questions.”

Stanislas sighed and at last nodded.

“Do not work yourself up over this case,” the man continued. “It is not worth it. After all, this Monsieur Pincus was what? A nothing, what you call one of your Little Miseries, living out his life in squalor. Investigate other dossiers, and we will forget you.”

Stanislas shifted his head right. The man had moved behind him with ponderous steps.

“Two minutes,” the man named Luc said, also sounding as if he had stepped back.

“Two minutes, Luc? In that case, a moment to spare. Any questions, Monsieur Cassel? You may speak.”

“Who are you?” Stanislas asked, his own voice sounding thin and weak.

“Who are we?” The man chuckled. “Luc, hear that? Why we are friends of Monsieur Boucher.”

“Good,” Luc replied, also laughing. “Friends of Louis Boucher, I like that. One minute,” he added.

Stanislas tensed his fingers on his thighs for the blow. The conga player ripped off several beats and stopped. The quiet unnerved him, and after a moment more he blurted out, “Are you there?”

He heard his heart beating out his fear. But he detected nothing else. He waited, motionless, sweating.

He wiggled to free himself from the rope and hesitated. When neither captor hit or restrained him, he realized they might have tiptoed out, after delivering someone’s ultimatum: Leave Boucher alone, treat the Pincus file as an unsolvable murder, and his own life would continue its regular rhythm.

They were professionals. They had planned beforehand, he realized, that call to his office yesterday that promised information on the case, the desolate quarter of Paris to meet, and which squatters’ hole to meet in. And he, in his reckless desire to solve still another dossier, had fallen for their lure. The thought of his stupidity and their treachery angered him. A state criminal investigator of his stature threatened!

He twisted his hands, not caring how the cord burned his wrists, and after several attempts the rope slackened. He freed himself, pushed up his blindfold, darted his eyes around, saw they had in fact left.

On the wall facing him some vagrant had scribbled in chalk “Franz Streible is a Hiterlite.” He stood unsteadily, coughed from the dust, and glanced around for his walking stick, and didn’t spot it. They must have tossed it when they jumped me near the entrance, he thought.

On a crate before him he spotted his flashlight, which his captors had left after dragging him up there, and which he now clutched as a weapon after flicking it on.

His captivity still disoriented him, and he cautiously hobbled across to the doorway and down the darkened stairs. On the third floor landing, fearing he had detected footsteps from a floor above, he froze. He squinted at the gloom overhead for the threat’s direction, while he gripped his flashlight tighter, eager to strike, as he recalled how they had humiliated him. But he heard no other sound except the rush of wind outside. He relaxed his breathing as he limped down the rest of the stairs.

Finally, the ground floor hallway, ugly with graffiti. Next the doorway where he paused, seeing the wasteland of boards with nails, piping, and bales of wire piled in the courtyard.

He spotted his walking stick in a puddle off to his left. He stooped, wiped off the mud, poked his way carefully through the slush and rubbish.

At last he reached the wrought-iron gate. Its creak, when he pulled back, frightened something to scurry under cover of bushes. Then he limped across the street to a bar.

A white apron lay flung, he noticed, on the counter top. When he rapped on the window, no one appeared. When he called out, feeling strange asking for help, no one answered. Then he noticed a scrawled sign, CLOSED INDEFINITELY, hanging from the inside doorknob. The riots against that police killing must have caused the owner to flee, he thought.

A car sounded in the foggy distance. He stepped to the curb and waved the driver to stop. The wet cobblestones glistened like yellowy scales in the headlights as a blurry man sped past. He raced down the street and vanished into the mist. He’d have to return to his apartment another way, Stanislas decided.

As he gazed around to regain his direction, he glimpsed through the mist further uphill the outline of another car. This one remained parked. Its headlights suddenly blinked on. They dimmed twice before the swirling fog closed over. An engine revved.

Was that driver telegraphing a message? Stanislas knew the answer. As he limped downhill toward a metro’s entrance, the sender’s warning echoed in his mind: We know where you are. Investigating the Léon Pincus murder had turned out to be more dangerous than he had anticipated.

The next day, late afternoon.

A woman prisoner, cuffed on a corridor bench, screamed.

A gendarme, passing by, yelled at her to shut up. Two other gendarmes escorted drug dealers, just indicted by Stanislas, toward the entrance and a waiting police van. The building settled back into quiet.

Stanislas glanced at his phone console, cursed with blinking lights throughout the last few hours. In the last minute or so, it had flashed red only once; the police had uncovered nothing incriminating yet in that abandoned tenement.

At the end of the hallway rested in silence the communal fax machine, a link to the Palace of Justice proper, downstream on the Ile de la Cité. Christophe, his clerk, had excused himself for the men’s room to dab away some tea stains.

At last a moment’s rest, Cassel thought. He ran a chewed nail down a page of his appointment book and saw he had one last task for that Friday, an interrogation at 16:30. Following that, he could depart for the evening, a short work regime of ten hours, completed.

Forced Handfasting by Rebecca Lorino Pond
Troubadour by Mary Hoffman
The Dells by Michael Blair
The Wishstone and the Wonderworkers by Hugh Cook
Doom Star: Book 06 - Star Fortress by Vaughn Heppner
Don't Say A Word by Barbara Freethy
Love Is All Around by Rae Davies
Jo's Journey by Nikki Tate
They Never Die Quietly (2010) by Annechino, D M
Cry Baby by David Jackson