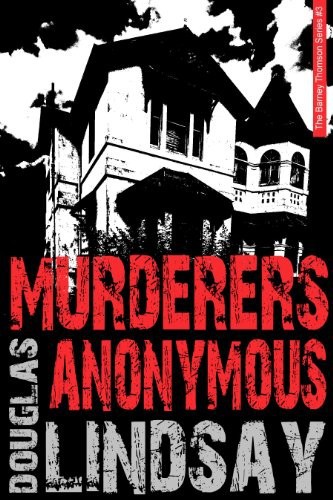 All rights reserved. No part of this publication may be reproduced or transmitted in any form or by any means without permission of the author.

Douglas Lindsay has asserted his right under the Copyright, Designs and Patents Act 1988 to be identified as the author of this work.

The Long Midnight of Barney Thomson

The King Was In His Counting House

The Haunting of Barney Thomson

The End of Days

The Long Midnight of Barney Thomson
by Douglas Lindsay

The Man in the Seventh Row
by Brian Pendreigh

The Killing of Emma Gross
by Damien Seaman

All The Young Warriors
by Anthony Neil Smith

Keep informed of new releases by signing up to the
Blasted Heath newsletter
. We'll even send you a free book by way of thanks!

Of course, it was still only October.

Santa Claus rang a mournful bell outside the St Enoch's centre on Argyll Street. Passers-by gave him barely a glance, though none were surprised to see him. The adverts had already been on television for a month, the decorations already adorned the shops, Cliff Richard had just released some gawping syrupy mince about love and understanding. And so they came and went and some of them dipped into their pockets to toss a desultory coin into the green-tinsel-rimmed red bucket; but most passed on by. It would be many weeks before the majority felt the guilt associated with the time of revelry, and began to hand over wads of dosh to the army of charities. The mournful bell was this scene incarnate. Weary shoppers trudged the precinct, dodging the Big Issue, heads down against the wind. A mild day, but bleak and drab. A hint of rain in the air, the low cloud oppressive. Not a Scottish team left in Europe, the Premier League already decided after the first Old Firm fixture; draws with Latvia, Scotland playing ten men at the back; the parliament going down the toilet, ignoring Glasgow as it went; prices going up, buildings coming down, the summer gone, and all with nothing to look forward to. Except Christmas.

This particular Santa Claus, as it happened, Wee Magnus McCorkindale from Bishopbriggs – Corky Nae Nuts to his pals – was representing no other charity than himself. But who was to know? The occasional passer-by who tossed a dejected coin into his bucket assumed what anyone would.

'Save the Children!' shouted Corky Nae Nuts every few seconds. On the assumption that no one was listening, he occasionally shouted 'Save the Whale!' or 'Save the Rainforest!' or 'Save the Thistle!'

Bleak but mild went the day. Still some in shirtsleeves despite the threat of rain, still women in summer skirts and men in T-shirts. Corky, the poor bastard, was boiling in his thick red jacket and horse-hair beard. Another couple of hours, went his plan, and he would have enough for a weekend at the boozer, a good trip to William Hill's, and maybe even sufficient remaining to tempt Sandra Dougan, a lady of available reputation, into a rampant ten-to-fifteen-minutes.

None of the pedestrians knew what went through this uncomfortable-looking Santa's head; and nor did he know what they were thinking. Which was good. Best not to know the secrets of others. Definitely best not to know.

This year's serial killer emerged from the shopping mall empty-handed and headed off up Argyll Street. Not thinking of Christmas. Hadn't done so in a long, long time. Wearing a jacket and too warm with it. He looked at the women on this grey day, wondered at the clothes and the shoes that some of them wore, but appreciated the acres of skin and cleavage still bared to the warm, dull day. Heard the bell of Corky Nae Nuts, but it penetrated no further than his subconscious at first, for he did not see the dingy red of his last year's Santa outfit. Thinking of nothing much but vague musings on the disintegration of the ozone layer and of moral standards and of the values of the current generation; the rules that now applied that didn't used to, and the rules that applied no longer; the in-your-face generation; the age of marketing, with limited-edition chocolate bars and bags of crisps.

But Corky's bell was loud and eventually, as our killer was already ten yards beyond, the sound penetrated and he turned and looked through the crowd. The bell rang, a pound coin clinked into the bucket and nestled beside a brace of tens. And he did not see Corky Nae Nuts. He saw red.

My Name Is Billy

A ripple of applause circled the room. Ten people clapping slowly, but appreciatively.

The applause died away. Billy Hamilton looked around the room, engaging the eyes of a few. A good turnout on this mild evening in mid-December. No football on the TV. The small moustache that had plagued his top lip since he was fourteen was sucked briefly under the confines of his thin bottom lip. His right thumb vigorously rubbed the palm of his left hand. He let go of the moustache then bit his lips. Eventually his eyes settled upon a woman at the back of the small group. Blue jeans, blue jumper, blue shoes, blonde hair and a face that had seen the inside of the occasional women's prison. Katie Dillinger, the leader of the band.

'Well done, Billy. Now, what have you got to tell us all this week?'

The moustache shrugged along with the shoulders.

'I haven't Billy,' said a young woman, not two chairs away from Hamilton's place in the circle.

'That's right,' said Dillinger. 'It's been a while since you spoke, Billy, and Annie's only been here two weeks. Why don't you tell your story again, then when you've done that, just tell us what you've been up to recently.'

Hamilton looked at Annie Webster and nodded. Not too keen on having to repeat his story for the fifth time since he joined the group – he was counting – but some women were impressed by it, and Annie Webster looked like the kind of woman he might like to impress. Young, blonde, breasts for Britain.

'Sure I won't bore the rest of you with it?' he said, casting his eyes around the room at the people who had become his friends.

'Don't be daft, Billy,' said Arnie Medlock. 'We're all here for you, you know that.'

Hamilton smiled. A new set of friends he'd found at the age of thirty-three. Not many people could say that. And these were real friends, not some fair-weather collection for the good times down the pub on a Friday night. These were people who would put out on your behalf, and Arnie Medlock more than the rest.

He gave Arnie another quick nod of acknowledgement, then prepared to go into his past one more time; albeit not for the last. He rooted his eyes to the floor, licked his lips, rubbed his hands together and took a deep breath.

'It was about six year ago,' he began, and tried to divorce himself from the words as he said them. 'I was working in an accountant's in Hope Street, just up from the station. I'd been there a few year, so I was getting paid well enough to be doing OK with myself. Had a wee place up Great Western Road. My motor was all right. Used to go out on Friday with my mates. Shagged some birds, you know how it is ...' – he cast his first glance at Annie Webster, with an attempted roguish smile, but roguishness was out given the nature of his moustache – '... did a bit of this, a bit of that. Had my season ticket for the Rangers ...'

'We'll cure you of that, if nothing else,' said Medlock, and Hamilton smiled again.

'I had it made, you know. Couldn't have wanted anything else. It'd have been nice if Rangers had been able to get past third-division Maltese sides in Europe, but that aside, life was a bag of doughnuts. But that's the thing, isn't it? You start thinking like that, and you're asking to be shagged. The trouble was, I started having a few problems at work, you know. There was one of those high-fliers there. Graduated a couple of years after me, but the minute he arrived he was angling to be made a partner. In his first year, getting paid buttons, and this bastard was acting like he owned the joint. Course, he got away with it because he was good, I'll give him that, but there were a few of us who would just've loved the chance to knife him in the back.'

He glanced apologetically at Annie Webster, who gave him a reassuring look in return, then he hurried back to the narrative, his voice picking up pace so that it was soon blazing a trail through his tale of jealousy, blackmail, revenge and breakfast cereal.

'So, I think I could still have put up with that, or maybe moved to another company, which I probably could've done because I'm no mug with a ledger, but there was a problem. Got into a wee bit of debt, you know. A few too many trips to the bookies; went to see Scotland in a couple of World Cup qualifiers overseas; doing a bit too much smack at the weekends, you know the score. Got myself into a bit of bother with a money-lender called Sammy the Buddhist out Blantyre way. One of the boys in the boozer put me on to him. Seemed like a decent enough chap at the time, but of course the minute I fell behind with the payments he developed serious designs on my gonads. So, being in a bit of a quandary, I did what any self-respecting accountant would do. I fiddled the books. Did a good job too, mind. Got myself enough cash to pay off Sammy the Buddhist and had enough left over to go to the Juventus game in Italy.'