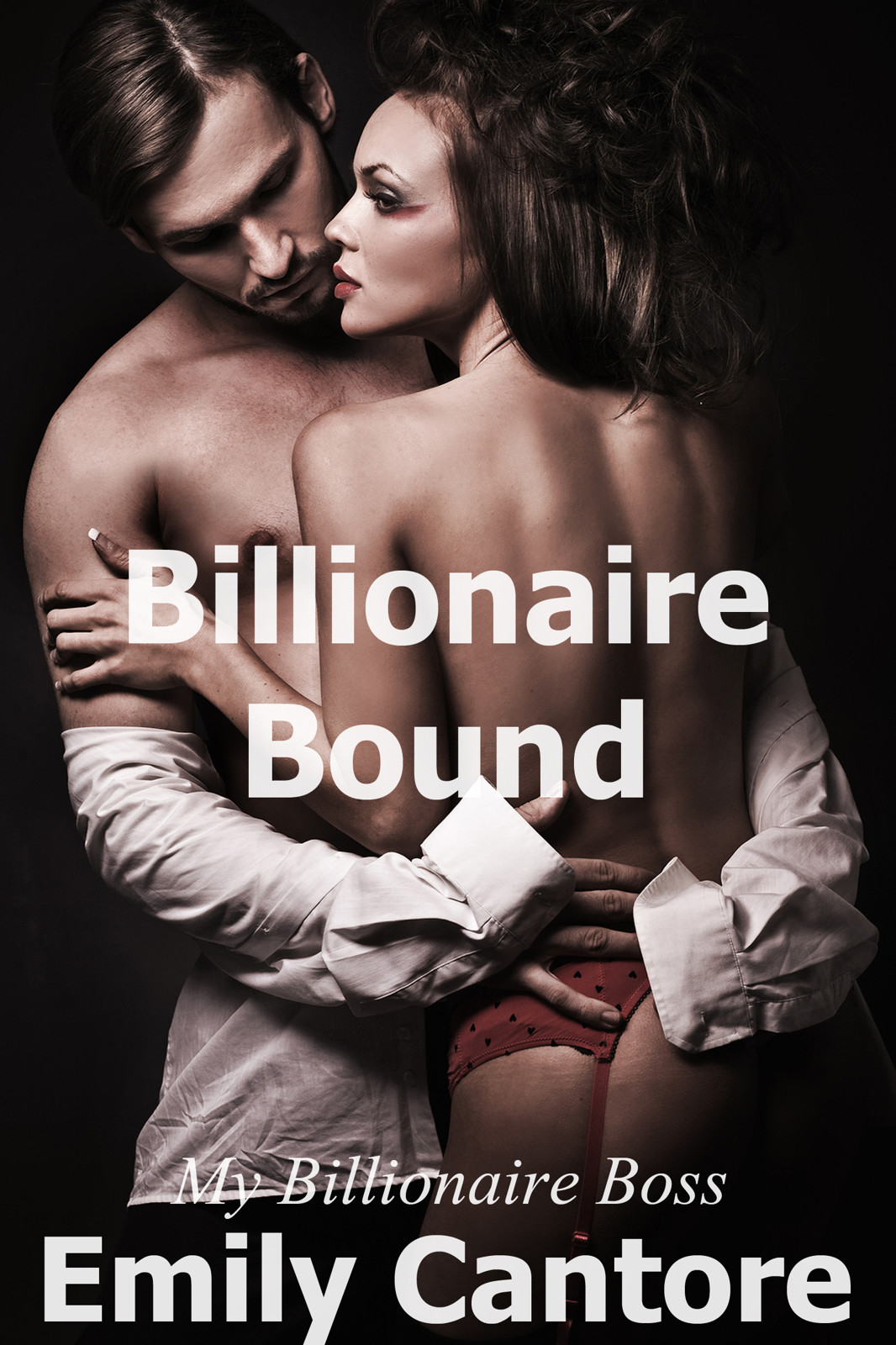 Copyright 2013 Emily Cantore. ALL RIGHTS RESERVED. This book contains material protected under International and Federal Copyright Laws and Treaties. Any unauthorized reprint or use of this material is prohibited. No part of this book may be reproduced or transmitted in any form or by any means, electronic or mechanical, including photocopying, recording, or by any information storage and retrieval system without express written permission from the author.

This is a work of fiction. The characters, incidents and dialogues in this book are of the author’s imagination and are not to be construed as real. Any resemblance to actual events or persons, living or dead, is completely coincidental.

I adjusted my glasses and tried to swallow but my throat had gone dry.

"Promoted to executive assistant. Take your things, these papers and go to the top floor," Ms. Green, the HR manager
,
said in a cold voice.

I tried to find my voice but only a croak came out and I felt myself break out in the sweat.

"I'd hurry if I were you. Mr. Stone doesn't like to be kept waiting," she said, not looking up from her computer screen.

"But I'm meant to be working as a records clerk," I protested. I'd only been at Stone-Black for three days and I'd already been promoted?

"And now you're an executive assistant. Take these with you. Good luck with your short-term career." She handed me an elevator fob and waved her hand at a stack of papers.

I picked up the papers and headed in the general direction of the elevator, trying to work out whether I should just walk out the front door. And what did she mean by "short-term career"?

Executive Assistant to Mr. Jackson Stone. The CEO of Stone-Black and reputed to be a mercurial tyrant who hired and fired people on a whim. I'd only seen his picture on the web - various charity balls, meetings with government officials - and what could I say? The man was hot. Tall with blond hair and blue-green eyes, he was a billionaire to boot. In every photo he seemed to be wearing a scowl as though there was a volcano inside him, barely held in check.

I got halfway to the elevator before I decided to bail on my plan. The Stone-Black corporation had practically destroyed my home-town of Bedford and then gotten away with it via various sneaky legal maneuvers. I thought being hired in the records department was the perfect way to discover something that could topple the whole business. I knew it had been too perfect to get that job and after only three days I had been "promoted" to executive assistant.

I turned abruptly and crashed directly into a man who'd been striding behind me. I dropped the papers to the ground, along with my bag. Bits and pieces went everywhere.

"Oh, I'm sorry," I stammered, trying to pick up all the papers at once from the floor.

A
red-leather briefcase came down next to my handbag and its contents strewn across the floor. The man scooped up the contents and put them back into the bag as I gathered the papers.

I swallowed again and croaked something that could possibly have been yes as I followed the line of an Italian suit up to two blue-green eyes.

I held out my hand and he pulled me to my feet. The website images didn't do him justice. He was tall but broad too and I could feel the strength of his hand on mine.

"Jackson Stone," he said and then frowned at me. "Weren't you meant to be coming upstairs to serve as my executive assistant?"

The way he said
serve
sent a shiver through my body. The man cut an impeccable figure in his classic dark Italian suit and white shirt. Almost enough to make me forget why I was here. But not quite. I changed my mind about leaving even though I felt my heart thud at the idea of working so closely with him.

"Delilah Neri." At least my voice had come back.

He turned our hands clasping into a handshake and looked me up and down. Between my
Wal-Mart
bag, Kmart skirt, shoes and shirt and red hair-tie that was struggling to hold my chestnut hair back I can imagine how I must have looked: like everything I owned was worth less than his briefcase.

"Oh, right," I stammered, feeling my fragile resolve leaking away.

He stood, holding my hand and staring directly into my eyes. Waiting.

I took my hand back and smoothed my skirt down.

He
handed me back my bag,
picked up his briefcase from the floor and then took the top piece of paper from the mixed-up pile I held in my hand.

"These are the handouts going to my investors. You need to put them back in order and then join me on the top floor before we go to the boardroom."

He put the paper back and I glanced down at it. It was numbered page thirteen of eighteen and had a name printed across the top: Javier Toro.

"The meeting is in twenty minutes. Don't be late."

With that he strode past me and I knelt down to retrieve the rest of the papers. I gathered the last few and turned around to find
Mr. Stone
standing behind me. He grabbed my wrist and drew me close to him.

"In that room, you represent
me
. You do not want to let me down."

He let me go and walked away, this time entering the elevator. I stood there, my heart thumping as he turned around and looked at me before the doors closed. I could still feel his fingers on my wrist, could still smell him - a mixture of soap and masculine scent.

"Don't make him wait," Ms. Green said from her desk.

I rushed over to an empty desk and dropped the papers on it before bolting off to the ladies room. The door closed behind me and I grabbed onto a cool ceramic basin, trying to calm myself.

"Fuck," I muttered and turned on the cold water to wash my hands to try to cool myself down. Was I really going to go through with this? My low-level job in the records department was meant to get me something to hurt Stone-Black. I'd hoped for something to embarrass them at least or something bigger to really make them sting. Now I was going to be executive assistant to the Jackson Stone, the CEO whose face and story I'd studied a hundred times. A man I thought I truly hated. And now that I'd seen him in the flesh, a part of me wanted him.

"Don't forget why you're here," I told myself in the mirror and adjusted my hair.

I took deep breaths as I headed out to collect and sort the papers.

I can do this.

It was a close thing but I got to the top floor with the sorted papers and three minutes to spare. I stepped out of the elevator into a simply gigantic room. Although I only had a few minutes before I was meant to be in Mr. Stone's office, I looked around. The floor was polished wood. Oak? Something golden and delicious. Running from the elevator in a straight line to two giant black mahogany doors was a pale inlay of another type of wood. Over to the right side was a desk and across from it,
two floor-to-ceiling windows.

It was, like, ten times the size of my entire apartment.
I walked over to the desk and saw it had a metal name plate
slotted into a holder on the front of it.
Delilah Neri. There it was, etched in metal for all to see.
I reached down and touched it with my finger. It moved sideways. It was just a piece of engraved metal, easily replaced.
Just like me if I screwed up.

I looked down at the rest of the desk, saw the clock and felt a jolt run through me. LATE!
I didn't even have time to put my handbag down.

Rushing without trying to run, I hurried over to the heavy doors and entered Mr. Stone's office.

I thought the previous room was big...

I rushed in, trying to take in what I was seeing without looking like I was. You know? The floor was a darker wood that changed over at the door. There were cabinets of black
and red
polished wood, Asian-styling and floor to ceiling windows that went almost all the way around.

Mr. Stone was leaning against the front of his desk flicking through a sheaf of papers. His desk! It was gigantic. I think it was at least twice as big as the double bed in my apartment. To the right was another room with the door closed. Private bathroom?

He didn't look up, not at my heel
s
clacking on the wood floor nor when I stepped onto the thick Persian rug that sat under the desk and surrounded it.
I approached him, feeling like a doe wandering into a lion's den. I glanced past his shoulder at the spectacular view and my foot caught suddenly on the rug...

Down I went, falling directly forward.
There was no way I was letting go of the papers again so down they went with me. I fell directly into Mr. Stone,
my face hitting his chest,
my
lips pressing against his shirt.

I landed on
my knees on
the rug but managed to save the papers.
My handbag hit the ground too but thankfully nothing came out.

He looked down at me with a cruel smile.

I stood up and gasped. On his
shirt were
two red lips pressed together where my face had hit him.

"Do you have another shirt?" I asked, feeling like I was going to be fired on the spot.

He
looked down at the lipstick marks and frowned. He
stood up a
nd walked around to the back of his desk.

"Lucky for you, I do," he said without a hint of humor in his voice.
"Turn around," he commanded.

I turned around as he stripped off his shirt. In the polished surfaces of black and red I could see at least six angles of his slim muscular body. I closed my eyes but then immediately opened them again. If I was going to get fired at least I'd enjoy the view.

"The papers," he said from right behind me. I jumped and turned around.
He was quiet when he moved.
Mr. Stone looked at me but I couldn't read his face. Anger? Disappointment? I had a sudden desire to step forward and kiss him. Or for him to pull me in close to him again, grab the back of my neck and kiss me.

"I don't like to repeat myself," he said and held out his hand. I gave him the papers and he quickly flicked through them before handing them back.

"One to every investor. Match their names and then take notes of anything important. A pad is over there. This way."

He walked past me and I again smelt soap and some indefinable essence of masculinity. I scurried over to the side table, put my bag down, picked up a yellow legal pad and pen and followed him out of the room.