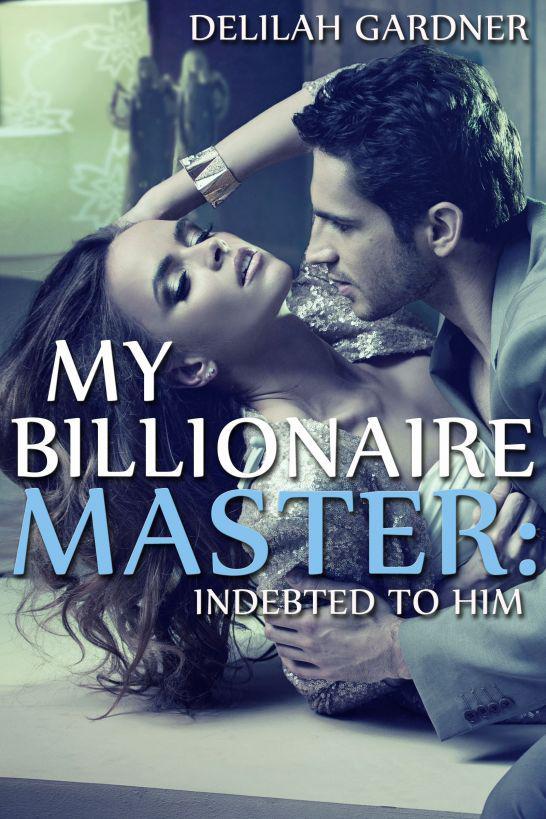 My Billionaire Master: Indebted To Him

All rights reserved. Except for use in any review, the reproduction or utilization of this work in whole or in part by any means, now known or hereafter invented, including xerography, photocopying and recording, or in any information storage or retrieval system, is forbidden without the explicit written permission of the author.

All characters depicted in this fictional work are consenting adults. Any resemblance to persons living or deceased, particular businesses, events, or exact locations are entirely coincidental.

A taste of things to come:

Cassidy turned her head away. She’d been told she was pretty. Words like gorgeous, sexy, and stunning had been previously used. But nothing had felt so honest, so humbling as the
beautiful
that tripped off Alfie’s tongue. He reached beneath her and nimbly undid her bra, dropping it to the side off the bed. Flushed red, her skin glowed while her nipples tightened to taut nubs ready for his touch.

When he leaned forward, lavishing them with his tongue, Cassidy dragged in a gulp of air as her hips rose under him. The hard shaft of his cock nudged her clit, sending her body into a helpless twist as blissful waves flooded through her. His hips curled over her to prod her clit with his trapped cock, urging the orgasm into a continuous spasm within her. Gasping at the intensity, she felt wetness against her and blushed harder, but couldn’t hold the embarrassment in the face of his lips and fingers at her nipples.

Cassidy stumbled to a stop at the traffic light. One heel clicking against the sidewalk, she hobbled and hopped to fix it without bending over and risking either tearing her miniskirt or exposing herself to the entire viewing public.

Christ! And on the day I run out of everything but my white lace thong. I really would be exposing
everything
!

Leaning against a pole to correct the errant heel, t
axicabs and irate drivers whipped past her while the outline of a giant hand blinked in neon red. Waiting impatiently with nerves thrumming through her chest, her stomach was queasy as if she’d eaten something slightly off. She mentally assured herself,
it’s just anticipation and nerves…not anything I’ve eaten.

Late for her first job interview
since college, she didn’t consider herself at fault since the lights went off in the middle of the night. This had inadvertently reset the alarm and, in her excitement, she’d forgotten to program her phone. She was just lucky her inner clock (still on pre-graduation time) had awakened her at eight, jolting her up for a morning class she no longer had.

Unfortunately, there was no way she would make a nine o’clock appointment. Unlike the college campus, she couldn’t just walk to wherever needed and arrive in ten minutes. Bus fair and cab were too expensive, like everything in the city, and forget residing where the jobs were found. She lived on the outskirts with her divorcee dad which meant everything in the city took an extra hour to reach.

I’m never going to make it.
What a way to start post-college life. Plus, I’m cursed for living in the country where the electricity blacks out when the wind blows.

At twenty-two years old, this was the first interview in which she’d actually received a call-back. A highly expensive Bachelor’s degree apparently didn’t offer much but shackled her with thousands of dollars in student loans.
The mountains of debt now loomed so high, she feared they’d bury her alive with every breath. Employers looked for Master’s degrees at the least. Unfortunately, no one understood exactly what a major in dance therapy really meant or how to utilize such at their company. Even though discouraged, Cassidy wasn’t a quitter. When times grew tough, she sought out secretarial positions.

I can write up reports, take messages, and text. Anyway…how busy could one company get?
Just smile and say, “Thank you for calling Bertram Industries…blah, blah, blah…”

Rolling various scenarios in her mind, she mentally groaned when her thongs threatened to saw her in half when she shifted from one foot to the other.
Wriggling while she waited, she tried to discreetly adjust her clothes back into behaving. Her sable business suit, perhaps cut a size smaller than necessary, displayed long legs ending at her five-inch black pumps. Although highly attractive, the tightness left her with little room to breathe.

Left over from her college days, the suit had embraced her curves but now cut into places which made it hike up with a mind of its own when she walked. Already receiving male attention, she blushed and hoped whoever interviewed her would understand her lack of funds. Staring straight ahead, she practiced answering the phone in her mind.

As red turned to green, Cassidy bumped into the electric pole, granting her shoulder a bruising blow before she hurried across the street. Having left in a hurry, she hadn’t considered the issue of walking a lengthy distance in the high-heels. She could already feel a blister forming.

With a groan, she anxiously thought,
I’m not getting this position. I can already feel it. Well—in for a penny, in for a pound…

She finally reached the huge looming offices of Bertram Industries. Unsure exactly what they did—something in art exhibition or museum curator management—she didn’t think it mattered. She
pondered over the details of a job brewing coffee, answering e-mails, and directing calls. Taking a deep breath, she shimmied with hopes that her skirt would settle and went for it.

C
onfidently striding through the massive double doors, her long brunette curls bounced against the middle of her back. She would have gone for a side-swept hairstyle but thought the curls said,
strong, confident,
and
sassy.
Confidence was currently needed, especially for them to ignore her twenty minutes of lateness.

She moved toward a bored security guard watching TV at the front desk, volume turned down low to nearly inaudible, and said “Hi. I’m Cassidy Fearn. I have an appointment today with a Mr. Jasper?”

Trying out her biggest and friendliest smile, she stuck out her hand for the man to shake. He gave neither grin nor hand a glance. She shoved her hand quickly down as a small blush bloomed on her cheeks.

“
You’re scheduled for nine o’clock. It’s 9:23.” The guard looked at his computer screen to confirm and then turned back to the black and white TV before droning out, “Mr. Jasper doesn’t generally take late appointments, Miss…Fearn.”

The black and white relic reminded her of childhood days when her parents were still together.
She hadn’t seen a black and white TV since she was a little kid.
Everything seemed easier, more secure, and less stressful. Prepared to do whatever necessary, she tried to take a deep breath in her too-tight sable suit without popping a seam.

Scrambling to keep her interview, she blurted out,
“I know I’m a little late. City traffic…right?”

Resisting the urge to squirm impatiently, she added, “Is there some place I can sign in? I’m sure he’ll see me.”

The guard grunted and pointed at a sign-in sheet already covered in scribbled signatures. Cassidy added her name to the immense list, mentally groaning as her heart sank. Now that she wasn’t hurrying, she had a chance to look around. Realizing there wasn’t any seating, she nervously asked, “Um, is there somewhere I can wait?”

“
Take the elevator to the eleventh floor. If he’ll see you, it’ll be there.”

“
Great. Thanks so much,” Cassidy mumbled, striving for politeness in the face of his boredom. When he offered no response, she quickly turned to the bank of elevators.

After growling her suit into place, she groaned aloud when the first step sent it roaming up her thighs again.
She exited on the eleventh floor, wandered around a long hall, and found an opened glass double door with a room beyond.

Needing to pull her roaming skirt back down, she slipped inside and hoped no one was watching. Somewhat resembling a lobby, it was covered in obscure artifacts and decorated in rich tapestries reminiscent of something out of
Lawrence of Arabia
.

A portrait, huge solid wood that shimmered with polish, of a young man with imposing crystal blue eyes and a mane of dark hair hung on the wall behind an empty desk. A little plaque underneath read
Alfred A. Bertram, CEO Bertram Industries
.

More than just the CEO of Bertram Industries from what she’d heard, Alfie Bertram successfully ran numerous companies. A thirty-two year old billionaire with striking features, he was a bachelor rumored to be reclusive, and a little bit crazy. He couldn’t seem to breathe without the local news reporting something about his behavior. Studying his portrait, she shivered at the oddly compelling handsome portrait while thinking
I can see why everyone wants to capture his attention.

Cassidy shrugged and moved on but a tiny porcelain vase caught her attention. Glimmering a beautiful gold despite the lack of natural light, Cassidy reached out to touch it even though she knew she shouldn’t. She tentatively caressed the smooth side with her index finger, thinking,
this one little item probably cost more than my entire college education
.

“
Miss Fearn,” a voice announced drolly from behind her. Cassidy jumped and almost twisted her ankle in her 5-inch pumps. Her skirt slid up her thigh another notch but she resisted pulling it down in front of him. Instead, she pivoted around, thankful he’d waited until she was finished with her caress before scaring her. A stern man in a suit appearing hand-stitched onto his body stared back at her. With a face completely blank of expression despite Elvin ears, his mouth was curled up in the corner like he was on the verge of a perpetual grin.