My Expectation (My Escort Series Book 3) 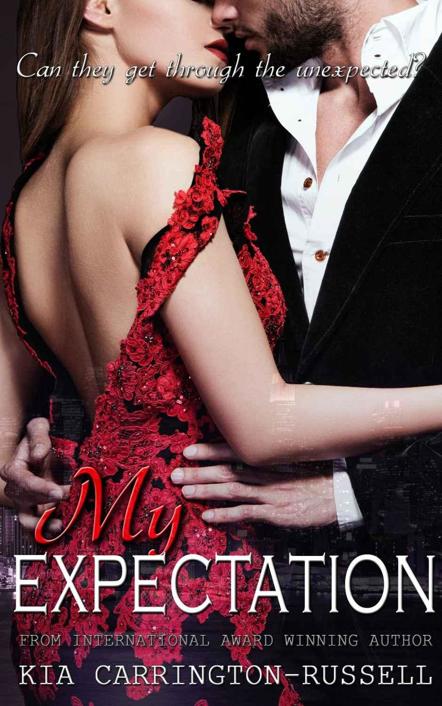 All rights reserved. This publication may not be reproduced or partially used by any means unless prior permission by the publisher.

A huge thank you to everyone who has been a part of my journey. To those who have supported me unconditionally and believed in my wings spreading and my dreams coming true- Thank you. Step by challenging step we are getting there. My writing is not only my career but my purpose in life, thank you for being a part of that vision.

The challenging thing about life is how you handle the unexpected.

To find optimism and love in each situation.

To be gentle when uncertain and not let these fears shine through.

Life is full of surprises.

It is full of mystery and love.

To find someone who completes you is the most magical part of it all.

It is the unexpected things that will bring you both closer.

Love is unsuspecting and is beautiful.

The truth is, no one knows what to expect when in love.

You just live each moment and bask in its radiance.

Enjoy the laughter and tears and never take it for granted.

Be you and happy in love.

M
r. Brogardt, Damon’s father and I waited patiently outside the hospital room door. We had been counting down the hours since we received the message that Michelle’s water broke. Twenty-seven hours later and with a large sense of anxiety within the ‘Be True’ Magazine office, we received a phone call from Phillip. I was already on my way home when I received that call. We now waited patiently for Damon to arrive from the office. Mr. Brogardt had arrived at the same time as me. We walked to the waiting room with a casual chat as we waited patiently for Damon.

Damon hadn’t much free time lately with the large workload he had taken on since claiming the CEO position of ‘Be True’ magazine, but this was an event that he instantly dropped his workload for.

Since the change over from Michelle stepping down and Damon taking the role, he had applied more pressure on himself by sourcing and creating new magazines and editions to expand on the Magazine’s success. Within two months, the first published edition of ‘Be True Sports’ was soon to launch. The trial articles written by Hayden Zilch, a former university friend of mine had spiked sales and increased the stats of male buyers in the main fashion magazine.

Since they’ve decided to work closely. Despite their issues at the start, the two have become very close and Hayden is still able to spend most of his time focusing on his own business, Zilch Enterprises. I hoped that after the launch of ‘Be True Sports’ that Damon might be able to take a small break but instead he focused on furthering and expanding the business. I admired his work ethic that was much like my own and I did everything I could to support him.

My travel columns and articles had expanded me fantastic opportunity. It was a highlight as other magazines tried to source me and offered me positions within their respective magazines. But not being biased, I would much rather stay at the magazine that I love so much, and well my boss is...  a sexy, charming, playfully teasing lover. Better phrased, is
my
lover.

It’s been about six months now since Damon and I began to live together and life has been busy with consideration of our jobs. I am scarcely home when I have to travel and Damon often has a lot of his own business trips and spends late hours at the office. Yet, what I admire most is that we are perfect for each other and understand each other’s limits and busy schedule. We are supportive and I could not imagine having that support from anyone else other than Damon.

“Am I late?” His voice rang out to me before my gaze had time to gravitate towards him. Damon walked with a slow pace down the corridor with his hair slightly messed and his tie loosened around his neck.

“No we’re still waiting for permission to go in,” I said with a smile as he looked around slightly bewildered. When Damon first found out he was going to be an Uncle he seemed to be just as shocked as Michelle and Phillip who found out about the pregnancy. He looked at the closed doors as if confused that one of them wasn’t yet open for us. Mr. Brogardt had a knowing smile.

“It’s fine. It will only be a little longer,” I mused to Damon. I held out my hand to him and he naturally took it. He leant down to me and gave me a sweet kiss on the lips as his slightly panicked demeanor began to wipe away.

“Sorry it took me so long,” he said still assessing the doors with anticipation. Mr. Brogardt cleared his throat.

“Dear boy, the way you are searching the empty halls, someone would think that you were about to give birth to the child,” Mr. Brogardt said with a cheeky smile. It reminded me far too much of the one Damon often had.

“Is that so father?” He mused back, now back to his usual self. He went to respond with a witty comment but Phillip began to walk down the hall grabbing our attention. He looked tired and much like the state that Damon was in with messy hair and the top two buttons of his dress shirt undone.

Although fatigued looking he gave us a warm smile as he adjusted his glasses. “There is someone I would like you to meet,” he said as he radiated with a magnificent glow.

Damon’s fingers were tightly bound in between mine as he looked back at me, nervous. I tried to hide the smile that toyed on my lips. He was so nervous, it made me question how he would react if we were ever to have a child. When finding out about Michelle’s pregnancy I had once thought about it, but since, time seemed to have flashed by. This year was almost over and the only progress made was within our own working careers, not that either of us minded. It was the only thing we could focus on right now and we supported that decision, but I couldn’t help but question if he would still have such an apprehensive demeanor to him if it were his own child. I wondered if children was something Damon even wanted. Oddly enough it felt like we had known one another for a lifetime and yet we had never properly discussed this.

Phillip led us around the corner and we let Mr. Brogardt walk in front of us. Phillip opened one of the doors and nodded at Mr. Brogardt as he walked past him. He rested his hand on his shoulder proud. We trailed in to the darker looking room and pushed aside the curtains to reveal a very tired Michelle who slowly rose higher in her sitting position.

Phillip was already by her side aiding in moving the pillows more comfortably underneath her. In her arms, was a small bundle of pink. Michelle reluctantly handed the baby over to Phillip with a smile. She doted on the little girl unable to pry her hand away from still touching the tips of her blanket.

Phillip handed over the baby to Mr. Brogardt who instantly looked ten years younger. He glowed with fondness as he pulled back the blanket slightly to have a better look. Damon and I took the side of Michelle. Damon pressed a kiss to her forehead and I did the same.

“Congratulations,” I said with a smile. Although tired, Michelle responded with the same.

“You did well,” Damon said proud.

“Of course I did. There was only one way that baby was coming out and I can tell you-”

“You’re my sister,” Damon said raising his hand with a smile. “I don’t want to know anymore.” I slightly laughed at the two as I shuffled around to have a better look at her. Mr. Brogardt offered her to me.

I hadn’t much experience with baby’s, but it brought back so many fond memories of when Megan, my little sister had her two sons. I adored my nephews and couldn’t believe how much they had grown since I once held them just like this. She was beautiful with the thick eyelashes of Michelle, and the little nose of Phillips. I smiled coyly as the baby hardly moved and was peacefully sleeping.

I felt Damon’s presence over my shoulder as he looked on in bewilderment.

“She doesn’t bite you know,” I teased.

“I heard they go through a phase where they do,” he mused. I sighed and shook my head.

“She doesn’t even have teeth yet,” I said. I rocked back and forth maternally.

“Thank Christ for that, could you imagine my poor nipples if she did,” Michelle mused. Phillip smiled at her response.

“Again I’m your brother and I don’t want to know,” Damon said with a smile as he reached over my shoulder to put his large finger in the palm of the baby’s hand.

“What’s her name?” I asked looking up at Phillip and Michelle. They had been very quiet about the name and Damon and I had a few bets of our own going on.

“It is lovely to finally meet you Rosalie,” Damon said with a smile, the warmth of his breath was flushing over my neck. “I am your Uncle Damon and this is Auntie Clover. And that old man over there is your Gramps.”

“Who are you calling old man?” Mr. Brogardt said with sternness. I smiled at those in this room that I now considered family. They have always been so welcoming of me being here. And for Damon to introduce me as Auntie, made my heart swarm even larger. They always made me feel loved and accepted.

“Congratulations Phillip and Michelle, she is beautiful,” I said with a smile.

Reckless Redemption: A Bad Blooded Rebel Novel (Bad Blooded Rebel Series) by Mellie George
Call of the Vampire by Twist, Gayla
Tempting the Player by J. Lynn
Incitement by David Graham
Tamed by Stacey Kennedy
Death in the Castle by Pearl S. Buck
The Only Boy For Me by Gil McNeil
The Circle of the Gods by Victor Canning
Winged Raiders of the Desert by Gilbert L. Morris
Madness by Bill Wetterman