Read My Pride, His Prejudice Online

My Pride, His Prejudice 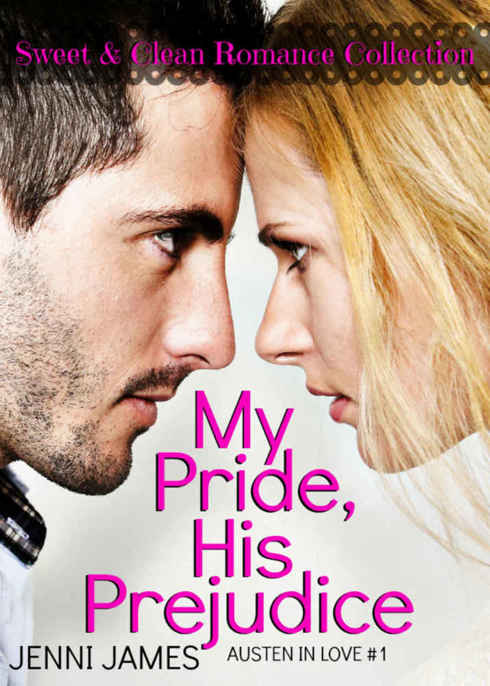 Book 1: My Pride, His Prejudice

This is a work of fiction, and the views expressed herein are the sole responsibi
lity of the author. Likewise, characters, places, and incidents are either the product of the author’s imagination or are represented fictitiously, and any resemblance to actual persons, living or dead, or actual events or locales, is entirely coincidental.

All rights reserved. No part of this book may be reproduced or transmitted in any form or by any means whatsoever without written permission from the author, except in the case of brief quotations embodied in critical articles and reviews.

This book is dedicated to:

M.M. Bennets, my dear, dear friend. May the heavens shine brighter ever after.

I would like to thank my sweet, handsome, playful hubby for all the wonderful Will Darcy material. You have added a sparkle to my life I never thought I'd feel. I love you.

“Excuse me? What did you say?” Eliza’s heart rate tripled as she nervously flipped her long blond hair over her shoulder. It was way too late at night to be dealing with this. How in the world could this be happening? Nothing made sense. Nothing.

The handsome man knelt down on one knee in front of her on her entranceway tile and reached into his chest pocket. “I was saying—”

“No!” She put her fingers over his to prevent him from pulling out the inevitable ring. A warm, solid hand met hers, and Eliza quickly pulled away. “I . . . er . . . I just meant that maybe you shouldn’t get too excited. I really don’t think we’d work out as a couple.”

Will Darcy, Salt Lake City’s hottest and wealthiest bachelor, gave her a strange look. “What do you mean, we wouldn’t work out?”

There was no way he was serious. She wanted to roll her eyes, but didn’t. “I’m assuming you haven’t had very many women turn you down for anything, have you?”

He cleared his throat and slowly made his way back to a standing position. “So … are
you
turning me down?”

Now that they were both standing, she couldn’t help but notice just how very tall he was, or how broad his shoulders actually were. Good grief—no wonder so many women fell for his charm. The man was like a cover-model-movie-star-god. Ugh. She hated his type. Eliza took a deep breath. “Yes, I am. But I’d like to thank you for the … er . . . amazing honor this is.”

“Wait.” He tilted his head. “Are you saying you had no idea I felt this way?”

She nearly choked. “About me? That you wanted to marry me? Uh—no.” Like that would’ve ever entered her mind. They could barely stand to be around each other, let alone snuggle next to each other at night. Oh. My. Word. She shuddered. That was the closest she would ever get to that image again. Yeesh.

He put his hands in his pockets and nodded. “Nice. I start to propose, and not only do you reject me, but you shudder as you do it.”

Her jaw dropped slightly. What was going on? “What am I supposed to do? I thought you despised me. But more importantly than that—why? Why me? Why now?” Elizabeth looked around and raised her hands, palms up. There had to be a camera somewhere, right? “Is—is this a joke?”

“No, Eliza, it isn’t a joke.” He rubbed his face and stared off into the distance. She could see his emotional wall going up between them like an iron wedge.

He couldn’t be serious. “Wait! Just answer me.”

His dark brown eyes met hers. The black ring around his beautiful irises seemed softer tonight, almost like they were … She gasped. “You’re crying?”

He winced. “Goodnight, Eliza.” As he turned to leave, she grabbed the sleeve of his suit.

“Just a minute. Don’t go yet.” He refused to make eye contact again. “I have to understand why. This seems so surreal. If you’re serious, please, explain to me. Weren’t we—didn’t we—haven’t we always been enemies?” Her voice drifted off. She felt so lost and vulnerable all of a sudden. William Darcy was upset, and somehow her whole world began to slip like sand underneath her feet.

He glanced down. Her eyes followed his, down his well-fitted gray suit and purple tie, all the way to his sharp designer dress shoes and then to her entranceway tile beneath their feet. “I was never your enemy,” he whispered.

She felt as though she’d been punched in the stomach. But she couldn’t let this end here and now—she had to sort this out. “Yes, yes, you were. I overheard you telling Charles Bingley that I wasn’t even good enough to date. How my presence annoyed you, since I wasn’t someone trained by your father’s company. How you didn’t even want me in your office building, let alone as your consultant.”

“Yes. I said that.” He still looked down. His foot tapped slowly on the floor.

“And then you’ve gone about making my life awful these last ten months, trying anything you can to get me fired.”

His head snapped up, and their eyes locked. This time, there was a blaze deep inside. “No. That’s where you’re wrong. I never wanted you gone. I’d hoped and prayed you’d be half the woman I realized you were. I knew you weren’t afraid of me. I knew you’d tell me like it is. I knew you were the exact woman I needed to help this whole company progress. I didn’t like it at first, but I knew it.” He walked over and leaned his shoulder against the door. “However, eventually I went against my better judgment, everything I’d been trained in an office environment to do, and decided to form a relationship with my consultant—I saw you as a woman I had to date, had to get to know more, and eventually, the woman I had to love.”

Her jaw dropped and she stepped back, though her eyes could not break their gaze. “Really? But . . .?”

“But what?” He shook his head. “Are you telling me you had no idea my feelings had changed? What about our lunches? Weren’t those considered dates? And those business trips? I took you halfway around the world!”

Was she hearing him right? “Yeah, the lunches where we spent at least an hour and a half arguing over your ridiculous attempts to handle certain clients? And those business trips when I had to leave my plans behind and instead babysit you for days on end to make sure you didn’t screw something up?”

“Babysit me?” He stepped forward. “Of all the—when you were the one who had no idea how to dress appropriately until you began working for me? You couldn’t even attend a public function without somehow saying something crass or outrageous and nearly upsetting my guests. Yes, you, the wild card!” He pointed right at her. “That’s right—I brought you along to babysit me.”  He folded his arms and attempted a laugh.

“Then why bring me?” She put her hands on her hips. “I knew you didn’t like me. I knew you were too arrogant to see anything past your own nose—I knew it! I’m surprised you even managed to take the time to stand in my doorway now and … and…”

She straightened her back and lifted her chin. Was that what this really was? A proposal? Not some joke? “Yes, propose. You still haven’t answered my question. Why me?”

“Yes, I did answer your question, though you’re too afraid of being wrong to have heard what I really said.” He ran his hands through his hair. “It doesn’t matter. You’ve made it clear you think I’m some overbearing monster who doesn’t deserve you anyway.”

“Well, if you had ever showed me once that you cared about me, given me any sign at all how you really felt, maybe I wouldn’t be in such shock right now.”

He stepped toward her, all tall, dark, and handsome power. “Would it have made a difference?”

No. She wanted to have some chemistry with the man she married, not this conceited ego on a stick.

She stalled. “Would
what
have made a difference?”

Will closed his eyes and sighed. “Never mind. It’s obvious that we’re going in circles now. Look, I’ll see you in the office on Monday. That is, if you still plan on working for me.”

Yeah, because this isn’t awkward at all.
“Of course.”

“And let me apologize for my stupidity. We’re clearly on two very different pages—something I’m relieved to see now. So thank you for your honesty.”

Two different pages? Good grief, they weren’t even in the same book! She smiled a tight smile. His arrogance was bugging her again. “Apology accepted.”

“Good luck. I’m sure there’s a guy out there you’ll fall for eventually. Don’t hold your breath, though. It might be awhile before you find one you actually like.”

That was it. She snapped. "Goodnight." She pushed past him and opened the door. “The answer is no. Never."

As he left and she shut the door, she felt her whole body begin to tremble. Laying her head against the thick wooden surface, she realized that for no good reason at all, she felt like crying . . . and punching the door . . . but mostly like crying.

Eliza closed her eyes and adjusted the phone tighter under her chin. “I know, Mom. I know. He’s completely rich and single and hot. I know. Now, for like the hundredth time, I just don’t feel like dating him.” She flicked her blond hair to the side and slipped her feet into the adorable half boots she’d found on clearance the other day. Eliza clutched her purse while her mother continued to spew out the annoying perfections of Utah’s most eligible bachelor.

“Yes, I avoid him. And I will continue to avoid him the longer I work there.” Eliza rolled her eyes and tapped her foot as she listened to the older woman’s disapproval.

Her mom would never stop. Eliza glanced at the small watch around her wrist. Ugh. She was late. After another quick look around her nearly pristine kitchen to make sure she had everything she needed, Eliza hastily put her half-empty mug of herbal tea in the sink, grabbed her keys, and headed out the door. After fiddling with the lock, she managed to make it to her car before her mom had actually convinced her that Will Darcy was worth the amount of energy it took to talk about him.