Mystery of the Star Ruby 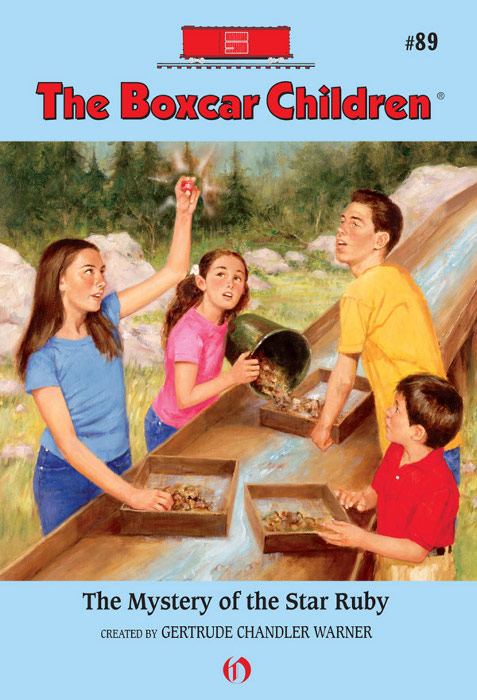 3 Jewels in the Dirt

5 The Figure in White

“I wish we didn’t have to go back to Greenfield,” said six-year-old Benny Alden.

Violet turned from the front seat of the car. “Don’t you miss our house?” she asked her little brother.

“And our boxcar?” put in Henry, sitting next to Benny.

Jessie, who was twelve, knew how Benny felt.

“The boxcar is important,” she said. “It’s where we lived before Grandfather found us. Benny just doesn’t want this vacation to end.”

“We did have a great time camping in the mountains,” their grandfather, James Alden, agreed. “It seems a shame to leave the area so soon.”

Benny became excited. “Does that mean we can stay longer?”

Grandfather smiled at him in the rearview mirror.

The Alden children looked at one another. They knew “we’ll see” often meant “okay.”

As they drove along the Blue Ridge Parkway, Henry spotted a sign.

“A gem mine!” ten-year-old Violet exclaimed. “That sounds great! Can we go there?”

“It does sound interesting,” said Grandfather. “We’ll check it out.”

Henry laughed. “A rock hound is someone who collects rocks and minerals.” At fourteen, Henry was used to answering Benny’s questions.

They turned off the main highway, following signs that led them from one twisting road to another. Jessie worried they would never find the gem mine—or their way out again!

At last the thick woods parted to reveal a clearing. A large sign with a giant painted red jewel proclaimed they had arrived at Ruby Hollow.

Grandfather followed the driveway into a crowded parking lot. They got out of the car and walked up a flower-lined path to a series of wooden buildings. At the main building, a man in a cowboy hat opened the entrance door and waved them inside.

“Come in,” he said. “I’m Cecil Knight, the owner of Ruby Hollow. I hope you plan to stay because we have lots to do here. Besides the mine, we have hiking trails, a restaurant, a museum, and a gem-cutting shop. I’ve got two cabins and a room left in the main building.”

“I didn’t realize so many people would be here,” said James Alden.

Cecil Knight tapped a poster on the wall in the lobby. “They come for the annual gem contest. It lasts a week. The person who finds the largest ruby by the end of the week wins first place. You’re just in time to take part!”

The children were looking at the framed photographs and newspaper clippings that hung on the wall. The pictures showed people holding red or blue stones. Some of the stones were pretty big.

“What do you win in the contest?” asked Henry.

“First place is a cash prize of one thousand dollars,” Mr. Knight replied. “Winners get their picture in the local paper. And our on-site jeweler will set the stone in the mounting of their choice. Solid gold, of course.”

Benny pointed to a photograph of a boy holding what looked like a big blue marble.

“Violet, will you take a picture of me with my marbles?” he said.

Mr. Knight chuckled. “That’s not a marble, son. The boy in that photo was twelve years old. He found a 1,497-carat sapphire worth eleven thousand dollars.”

“Grandfather, can we stay?” Benny asked eagerly. He wanted to start digging for gems right away.

“I guess we’ll need those cabins and that room,” Grandfather told Mr. Knight. “The children will take the cabins. I’ll stay in the main building.”

“Come back to my office.” Mr. Knight led the way down a short hall.

Knotty-pine paneled walls were crowded with more photographs. But these pictures were older, in black and white instead of color.

While Grandfather registered, Benny studied a photo of two boys standing by a big wooden wheel. One boy grinned into the camera, but the other slouched with his hands in his pockets, frowning.

Once they were checked in, Mr. Knight explained some of the procedures.

“There’s a five-dollar entry fee for each person, every day you work on the flume line,” he said. “Buckets range in price from five dollars each up to fifty dollars for a family-sized bucket. All our specialty buckets are guaranteed to produce gemstones.”

Violet didn’t understand. “Don’t we go dig in the mine?”

“Ruby Hollow Mine closed fifty years ago,” Mr. Knight told her. “What we do is bulldoze ore from the creek and around the mine. There are plenty of stones in this region! If you look carefully, you can actually find rubies along the roads.”

“When you’re ready, go down to the flume,” said Cecil Knight. “Someone down there will get you started.”

As they walked back to the car, Grandfather pointed out the two empty cabins. “There’s Garnet. And the one two doors down is Mica.”

“A garnet is a semiprecious gem,” said Henry, reading from a brochure. “And mica is a mineral. Why don’t Benny and I take Mica, and you girls can stay in Garnet.”

After retrieving their luggage from the trunk, the children went to their cabins.

Benny liked the one he was sharing with Henry. It had pine bunk beds and old-fashioned mining lamps hanging on the walls.

“Top bunk is mine!” he claimed.

“Okay,” said Henry. “I hope the girls aren’t unpacking. I want to start looking for rubies.”

The girls did, too. They were waiting outside the boys’ cabin.

James Alden glanced at the sun sinking behind the pines. “Well, it’s pretty late. But I’m just as eager as you are. Let’s go!”

They walked down a trail marked FLUME. At the end was a booth. Grandfather paid the entry fees to the girl inside.

“You get a complimentary bucket your first day,” she said, handing over a large bucket filled with dirt. “Good luck!”

The flume was directly ahead of them. A waterwheel turned wooden paddles, supplying a steady stream of fresh creek water that flowed through a long, V-shaped wooden trough. People lined both sides of the trough, sifting dirt in mesh-screened trays.

Near one end of the flume was a stack of mesh-bottomed trays.

Grandfather scanned the brochure. “We each take one of these trays. Then we’ll go work on the flume.”

“That long wooden thing with water going through it,” answered Grandfather. “The waterwheel keeps the water moving so you can rinse the dirt.”

Benny recognized the waterwheel as the wooden wheel in the photograph in Mr. Knight’s office.

The Aldens found places along the flume. People shifted to make room for them.

A young man with sandy hair and glasses smiled at Benny.

“Your first try at panning?” he asked.

Benny nodded, holding up his tray. “I want to find the biggest ruby in the world.”

The young man laughed. “Don’t we all. My name is Jonathan Merrill. I’ve been coming to Ruby Hollow every summer since I was in high school. I’m nearly out of college now, but I still like to come here.”

Grandfather introduced himself. “These are my grandchildren—Henry, Jessie, Violet, and Benny. I’m afraid we’re all beginners.”

“It’s a lot of fun,” said Jonathan. “I’ll give you some pointers. First, don’t put too much ore on your tray.” He scooped some dirt from the bucket and dumped it onto each tray.

Benny wrinkled his nose. “How am I going to find a ruby in that mess?”

“Here comes the fun part,” Jonathan told him. “Dip your tray into the water, then rinse. See? Some of the mud washes down the flume.”

“But my tray is still muddy,” said Jessie.

“You have to keep rinsing,” Jonathan instructed. “Rinse and then shift the rocks around. You have to do this until the water runs clear. Then you’ll be able to see the rocks that are left.”

The Aldens rinsed and tilted their trays, letting the muddy dirt wash away.

“Not yet. Keep rinsing.”

After a while, Jonathan checked their trays. “Great! Now let’s see what you’ve got.” He sorted through the small stones in Violet’s tray first.

“Rubies and sapphires don’t come out of the ground polished and cut like you see in jewelry stores,” Jonathan said. “They’re embedded in matrix, a rocky material. So they look like rocks at first.”

Jessie peered into her own tray. “If they look like rocks, how will we ever know we found a ruby?”

“There are clues to help you identify gems in the rough,” said Jonathan. “Visit the Ruby Hollow Gem Museum. There are displays to help you see what rubies and other gems look like with and without matrix.”

“I can see there’s more to this than we thought,” Grandfather said with a laugh.

“You’ll catch on fast.” Jonathan leaned over Grandfather’s tray and sorted swiftly through the stones. He held up a black rock. “This is obsidian.”

“What do I have?” Benny asked.

Jonathan examined the stones in Benny’s tray. He dropped a tiny stone into Benny’s palm.

“Not bad for your first day,” Jonathan pronounced.

Benny put his sapphire in his pocket. “Rock-hunting makes me hungry!”

Grandfather laughed. “Everything makes you hungry. But it
is
dinnertime.”

“I’ll walk with you up to the restaurant,” said Jonathan. They all turned in their trays and washed up at the old-fashioned outdoor pump.

The restaurant was inside the main building. Outside the entrance, the menu was written on a chalkboard. Guests dined family-style at the big pine tables.

Jonathan and the Aldens sat down.

They were soon joined by a woman around Grandfather’s age and a dark-haired man wearing sunglasses and a white cotton shirt.

“I’m Sybil Finley,” the elderly woman at the table said. She wore a white oversized man’s shirt and carried a straw hat. “I saw Jonathan helping you on the flume.” 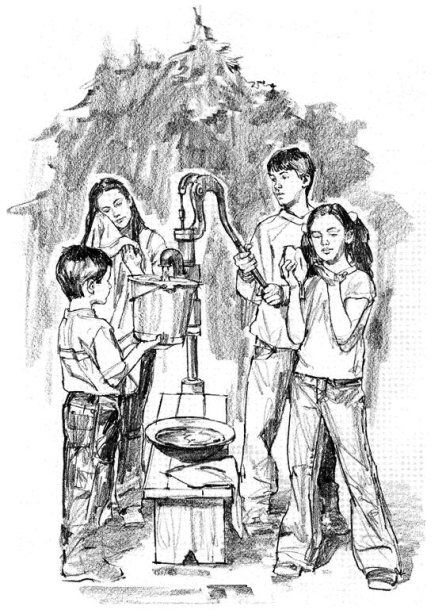 “Is this your first day, too?” Benny wanted to know. He popped a hush puppy in his mouth, enjoying the crunchy sweetness of fried cornmeal and onion.

Sybil grinned at him. “Not hardly. I’ve been a rock hound my whole life. I’ve been to every gem mine around. But I keep coming back to Ruby Hollow.”

“What brings you back?” Grandfather asked.

“Well, it’s the only mine that has star rubies,” replied Sybil. “And I also enjoy the contest.”

“You might as well go home, Sybil,” the dark-haired man spoke up, pulling off his sunglasses. “
I’m
going to win that contest.”

“How come you’re going to win?” Benny asked the man, who’d said his name was Donald Hodge. “The contest doesn’t end till Saturday”

“Because I found a Papa Bear ruby” Donald said smugly “It’ll be a challenge for anyone to find a bigger stone.”

He pulled a black velvet bag from his pocket and opened the drawstring. A large pinkish rock with red glints tumbled onto his place mat.

Jonathan whistled. “Is that the stone you found in your last bucket today?”

As Jonathan reached for the rock, Donald deftly scooped it up and dropped it back into the velvet bag. “Can’t touch my contest winner,” he said jokingly.

The Seven Songs by T. A. Barron
SURRENDER IN ROME by Bella Ross
The Reckless Bride by Stephanie Laurens
So Not a Cowgirl by Starla Kaye
The War Against Boys by Christina Hoff Sommers
I Carry Your Heart (Heart Series Book 1) by C.M. King
Kate's Kisses (Sweet Treats Bakery) by Manners, Mary
Healthy Place to Die by Peter King
Star Crossed by Emma Holly
Passage of Arms by Eric Ambler