Read Nanny Piggins and the Race to Power 8 Online

Nanny Piggins and the Race to Power 8 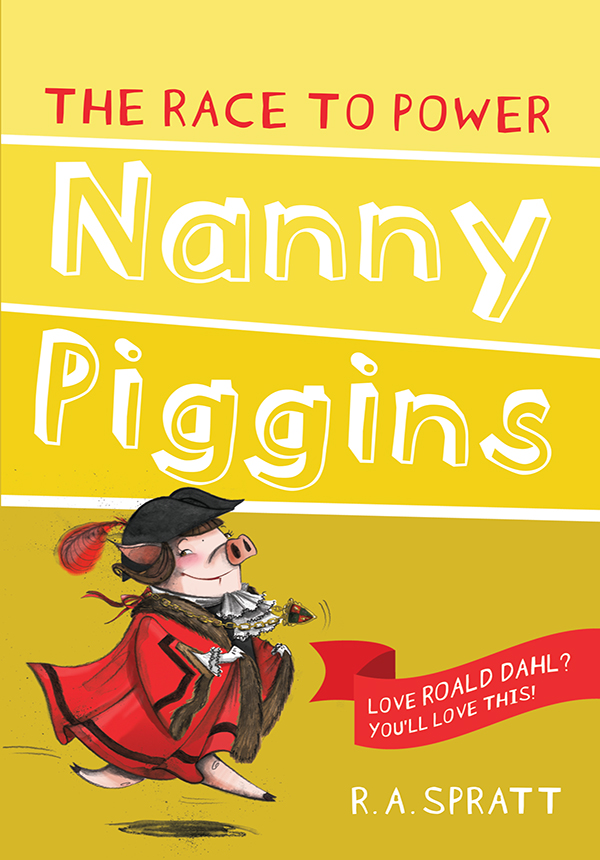 In this riveting eighth instalment of Nanny Piggins’ adventures, she sets out to thwart Mr Green’s political ambitions by running for mayor herself. Her mission? To proudly fight for Liberty, Equality and Cake! Is democracy safe? Probably not. Nanny Piggins has a radically different campaign, which includes a diabolical fun run, being trapped in a sabotaged lift, faking seismic activity, safeguarding the local vacant lot and beating the world pole-vault record. 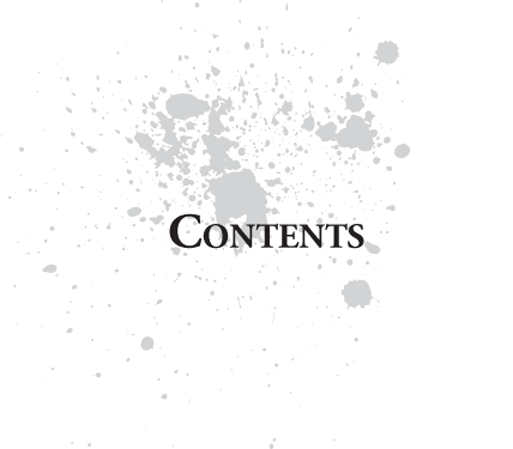 Mr Green has a Terrible Idea

Nanny Piggins and the Campaign Strategy

Boris and the Big Snore

Nanny Piggins and the Happy News

Nanny Piggins and the Vacant Lot

Nanny Piggins and the Last Cake of the Romanovs

Nanny Piggins and the Great Debate

Nanny Piggins and the Hidden Treasure

Nanny Piggins and the Election Day

Congratulations on obtaining this book. It is shockingly brilliant. If, however, it is the first Nanny Piggins book you’ve read (perhaps because you’re a numerologist who pathologically avoids anything involving the numbers one through seven) or if you have read the first seven books but you can’t remember a thing about them because you read so much pig-based literature that it is all a blur, either way – do not fret.

But if you are an anxious type who wants to be fully prepared for what lies ahead, here are a few pointers to get you started.

Nanny Piggins is the world’s greatest flying pig. (She doesn’t have wings; she gets blasted out of cannons. Or, rather, she used to get blasted out of cannons before she ran away from the circus due to the lack of chocolate biscuits in the employee break room.) She became a nanny when she saw a sign on the Green’s front lawn, and as it was raining and she did not have an umbrella, she applied immediately.

Mr Green, her employer, is a dreadful man. He is a tax lawyer. No more need be said. If you imagine a tax lawyer you will have a pretty good idea of everything you need to know about him. But in defiance of genetics his three children, Derrick, Samantha and Michael, are a delight. Nanny Piggins’ brother, Boris the ballet-dancing bear, also lives with them (although Mr Green doesn’t know this, because he is too unobservant to notice the ten-foot-tall, highly emotional Russian bear living in his garden shed).

There are lots of other wonderful characters, including a very kind Police Sergeant, a hygiene-obsessed rival nanny, a petty school principal, a retired Army Colonel with romantic aspirations, several very exotic former circus colleagues and thirteen beautiful, glamorous and often evil identical twin sisters, just to name a few. But I won’t describe them all in detail, because it will be nice for you to have some lovely surprises as you read along.

So find yourself a comfortable chair and a nice big chocolate bar, then sit back and enjoy this book.

R. A. Spratt, the author 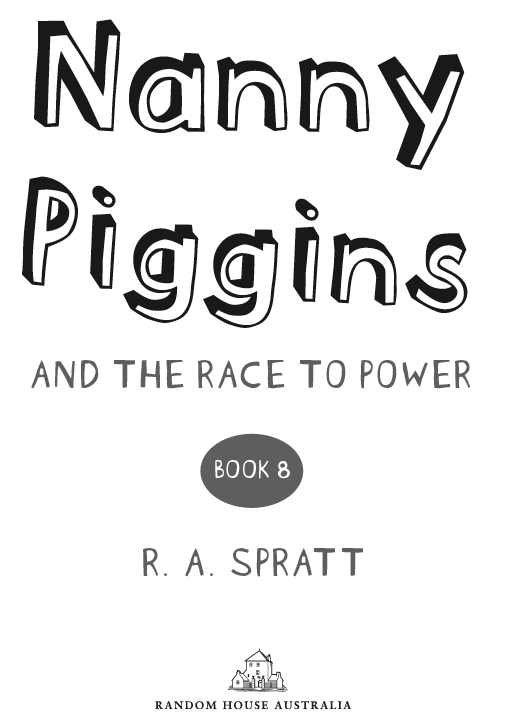 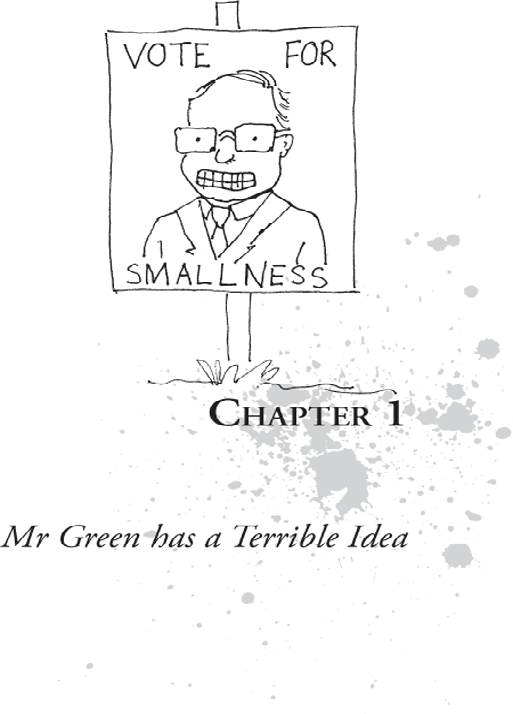 Nanny Piggins and the children were just putting the finishing touches on the leaning tower of Pisa. Obviously, it was not the real leaning tower of Pisa. It was a ten-foot-tall replica they had made entirely out of profiteroles, which was no easy thing. As any architect will tell you, twelfth-century Romanesque columns and Corinthian capitals are hard enough to craft out of stone (hence the lean in the leaning tower), but to make them entirely out of cream, choux pastry and chocolate takes real artistry.

‘Finished!’ announced Nanny Piggins as she stood back and admired her work.

‘It is spectacular,’ said Samantha.

‘I know,’ said Nanny Piggins. ‘It’s a wonder the Italians didn’t have the good sense to build the Tower of Pisa out of chocolate and pastry in the first place. That way, when it started to lean they could have eaten it and built it again.’

‘Speaking of which,’ said Michael, ‘can we eat it now? We’ve got to catch the school bus in twenty minutes and I’m getting hungry.’

‘Of course,’ said Nanny Piggins. ‘We just need to carry it through to the dining room.’

‘Can’t we eat it here in the kitchen?’ asked Samantha, looking at the precariously balanced pillar of food.

‘Samantha Green!’ exclaimed Nanny Piggins. ‘How can you suggest such a thing?! We may be hungry but we are not animals.’

‘You are,’ Derrick pointed out.

‘That’s not the point,’ said Nanny Piggins. ‘When you create a masterpiece of culinary delight such as this, it is too good to be scoffed on the kitchen floor. It needs to be consumed with the elegance and dignity of the dining room.’

‘Besides,’ said Nanny Piggins, ‘I thought if we ate it in the dining room, we could all lie on the dining-room floor and get Boris to push the tower on top of us. Then we could pretend we’re earthquake victims forced to bravely eat our way out of the rubble.’

This sounded like a tremendous idea to the children. Apart from involving a delicious breakfast, they suspected that if a ten-foot-tall pillar of food fell on them, there was a very good chance that by the time they ate their way out, they would have missed the bus to school. And Nanny Piggins had very strict rules about not running to catch the school bus. She felt it only gave the bus driver an exaggerated sense of his own importance.

Soon all four of them were carefully carrying the profiterole creation into the dining room. It wobbled with every step, but Nanny Piggins knew more about structural engineering than the twelfth-century Italians, so she’d had the good sense to build in solid chocolate reinforcements to ensure the integrity of the structure. Obviously it takes a great deal of concentration to carry a ten-foot-tall tower of profiteroles. You have to carefully avoid light fittings, doorframes and tripping over your own feet. So, just as they were about to heave the tower onto the table on the count of three, the absolute last thing they wanted to hear was someone loudly clearing their throat.

‘Agh!’ exclaimed Nanny Piggins as all four of them flinched and the tower wobbled precariously. ‘Someone’s broken in and is trying to eat our profiteroles! Don’t worry, children. I’ll distract them while you try to eat as much as you can!’

‘Hang on,’ said Nanny Piggins, adjusting her grip on the tower so she could peer around and see the source of the noise. ‘Ugh, it’s just your father.’

The children groaned. They carefully put down the tower.

‘What are you doing here?’ demanded Nanny Piggins.

‘It’s my house,’ said Mr Green. ‘I’ve every right to be here at breakfast time.’

‘Perhaps,’ conceded Nanny Piggins begrudgingly, ‘but usually you go to the office early so you can steal other people’s food out of the refrigerator and eat that for breakfast.’

Mr Green blushed slightly at this because it was true and he had no idea how his nanny could possibly have found out. (In fact, she had just guessed. When it came to food, Nanny Piggins had the instincts of a criminal profiler. Having worked in the circus for years, she could recognise the many hues of guilt written across a man’s face.)

‘Anyway, I wanted to speak to you all because I have wonderful news,’ said Mr Green.

The children groaned again. Whenever their father had ‘wonderful news’, it nearly always involved him trying to send them to a workhouse, sell them into slavery or give them to a pack of wild wolves to raise.

‘What sort of wonderful news?’ said Nanny Piggins, squinting and getting ready to launch herself at his shins.

‘I have arranged a holiday for you all in South America,’ declared Mr Green.

‘Really?’ asked Samantha. She was surprised because that sounded rather nice and it was unlike her father to do anything nice.

‘Yes, you are all going to stay at a mountain homestead in Chile,’ said Mr Green.

‘No catch,’ said Mr Green. ‘Just a delightful holiday for my children, a chance to soak up the local culture and enjoy the sunshine.’

‘Are you telling me you went to a travel agent and bought aeroplane tickets yourself, with cash money?’ asked Nanny Piggins.

‘Yes,’ said Mr Green, ‘and frankly I resent the implication that you think otherwise.’

‘Well . . .’ said Mr Green. There was something about Nanny Piggins. When she glared into his eyes, he found it very difficult to lie (and he was normally very good at lying; after all, he was a tax lawyer).

‘Who paid for the tickets?’ demanded Nanny Piggins.

‘It’s a banana plantation. They paid for the tickets in exchange for six months hard labour,’ explained Mr Green.

‘You sold your children into slavery for the price of return air tickets?’ accused Nanny Piggins.

‘No,’ admitted Mr Green. ‘They are one-way air tickets. They’re going to have to work for another six months if they want to come back.’

The children grabbed hold of Nanny Piggins before she could lunge. They knew she would be cross with herself if she ruined her appetite on their father’s trouser leg when there was so much profiterole to look forward to.

‘What’s this all about, Father?’ asked Derrick. ‘It’s been months since you last tried to get rid of us. Why are you trying to get us out of the way now?’