Read Nanny Piggins and the Race to Power 8 Online

Nanny Piggins and the Race to Power 8 (18 page)

The Russian Head of Security looked sheepish. ‘You published a photograph of the president in his underwear.’

‘I did?’ said Nanny Piggins.

‘And you didn’t warn him you were about to take a photograph so he didn’t have time to suck in his tummy first,’ said the Russian Head of Security.

‘That can’t have been my sister,’ said Boris. ‘She would never be that cruel.’

‘So this has nothing to do with Nanny Piggins eating the last cake of the Romanovs?’ asked Michael.

‘What?’ asked the Russian Head of Security.

Nanny Piggins quickly put her trotter over Michael’s mouth to silence him. ‘Don’t mind him,’ said Nanny Piggins. ‘He doesn’t know what he’s saying. His blood sugar is low.’

Samantha suddenly had a brainwave. ‘Are you sure you’ve got the right Piggins?’ she asked.

‘Of course,’ said the Russian Head of Security. ‘We have her picture right here.’

The Russian Head of Security produced a mugshot of a very guilty-looking Nanny Piggins.

‘Maybe you aren’t looking for Nanny Piggins,’ said Samantha. ‘Maybe you are looking for one of her identical fourteenuplet sisters. You do realise that this is Sarah Matahari Lorelai Piggins.’ Samantha pointed to her nanny.

‘No, I am not!’ said Nanny Piggins. ‘That’s my morally bankrupt sister.’

‘Is Beatrice worse than Wendy the evil super-spy or Katerina the lover of vegetables?’ asked Michael.

‘She is more fun than Katerina but she is more amoral than both of them put together, for Beatrice is a member of the paparazzi,’ declared Nanny Piggins. ‘She specialises in taking embarrassing pictures of politicians and publishing them in the newspaper.’

‘So that’s not you?’ asked the Russian Head of Security.

‘Oh dear, we’re going to be in trouble,’ said the Russian Head of Security. ‘I don’t suppose you have an address for your sister then?’

‘My sisters and I don’t keep each other’s postal addresses. We aren’t big on sending Christmas cards,’ said Nanny Piggins, ‘but I think I can work out where she might be.’

‘Where?’ asked the Russian agent.

‘You have to understand that my sister Beatrice has a genius for hiding,’ said Nanny Piggins.

‘All her sisters are geniuses at one thing or another,’ supplied Michael.

‘In her job as a paparazzo Beatrice has perfected the art of hiding in bushes, sneaking behind parked cars and gluing rubbish all over her clothes so that she can creep up on unsuspecting celebrities,’ explained Nanny Piggins. ‘She could be here right now and you’d never know it.’

They all looked about at the bushes, parked cars and postboxes to see if any of them could be a disguised pig.

‘But she’s not,’ continued Nanny Piggins. ‘You have to think the way she would think. The best place to hide is the very last place a team of Russian agents would ever think to look for her.’

The Russian agents looked at each other. ‘You’ll have to give us a clue,’ said the Russian Head of Security.

Twenty minutes later they were all standing in the lobby of the Russian embassy, again.

‘Where is she?’ asked the Russian Head of Security.

‘Right there!’ declared Nanny Piggins as she spun around, leapt over the counter and wrestled the grumpy passport clerk to the ground. And let me tell you it was quite a wrestling match. It was immediately apparent that Nanny Piggins was entirely right and that the Russian official was in fact one of her identical fourteenuplet sisters. And not just because as soon as Nanny Piggins knocked her wig and glasses off they looked exactly alike, but because they were so evenly matched at wrestling. They rolled about on the floor, putting each other in leg locks and beating each other about the head with staplers and other office equipment for a full twenty minutes, before Nanny Piggins called a truce so that they could have a cake break.

‘But how did you know it was me?’ asked Beatrice.

‘It was the passport photo that gave you away,’ said Nanny Piggins. ‘It was so awful. No mere government official could make someone look that bad in a passport photo, only a photographer of extraordinary ability could pull it off.’

‘Thank you,’ said Beatrice. ‘So few people appreciate the artistry involved in making someone look dreadful.’

‘But why would you risk coming here?’ asked Derrick. ‘It’s a lot of trouble to go to, to take a bad passport photo.’

‘The passport photo was just for fun,’ said Beatrice. ‘I am on a mission.’

‘A mission?!’ exclaimed Nanny Piggins. ‘Don’t tell me you’re a top-secret super-spy too. It’s bad enough that Wendy is.’

‘No,’ said Beatrice. ‘I’m on a photography mission. A bounty has been put on your head.’

‘Really?’ asked Nanny Piggins, looking up to see if there was a Bounty chocolate bar sitting on her head that she had not noticed previously.

‘Not that type of bounty,’ said Derrick.

‘Good,’ said Nanny Piggins. ‘I would be ashamed to be walking around with a chocolate bar on my head and not having eaten it.’

‘Word has gone out in the paparazzi community that one of your political rivals . . .’

‘I don’t know,’ said Beatrice. ‘He used a fake name to protect his identity – Mr Greenway.’

‘That sounds like your father’s level of imagination,’ said Nanny Piggins.

‘Anyway, he let it be known that he would pay top dollar for a compromising photograph of you,’ explained Beatrice.

‘You would sell-out your own sister?!’ said Nanny Piggins. ‘I’m appalled. How much for?’

‘Oh, well that’s entirely understandable then,’ said Nanny Piggins. ‘I’ll tell you what. I’ll pose for a compromising picture if you split it with me.’

And so Nanny Piggins and her sister set up the most compromising situation they could imagine. Beatrice took a photo of Nanny Piggins eating a salad sandwich.

‘It could damage your campaign,’ warned Derrick.

‘Pish! It won’t hurt my image one jot,’ said Nanny Piggins. ‘Anybody who knows me will know that it could not possibly be true and it must have been digitally altered.’ 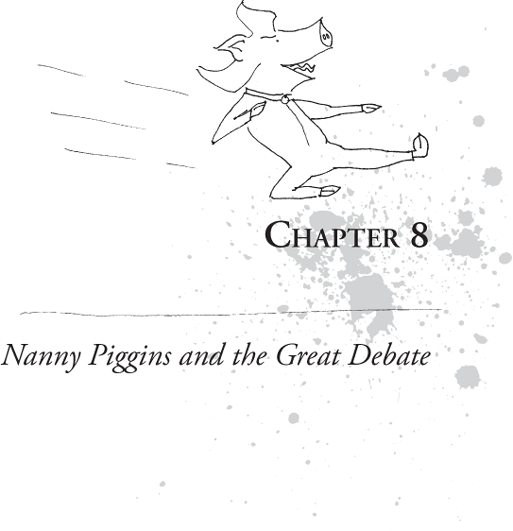 ‘You are both blithering idiots. I’m astounded that you have not been locked in high-security institutions for the criminally stupid,’ yelled Nanny Piggins.

She was preparing for the mayoral debate – a televised event that took place before each election. Normally candidates would present their own policies and point out inadequacies in the policies of their opponents. But Nanny Piggins had a much more spectacular debating style.

‘There’s no such thing as institutions for the criminally stupid,’ argued Derrick. He was pretending to be the incumbent, Mayor Bloomsbridge, which was very brave of him because he did get hit in the head by slices of cake whenever Nanny Piggins became too cross to express what she was feeling with words alone.

‘Well then, there should be, if for no other reason than to keep the likes of you two off the streets,’ yelled Nanny Piggins. (The shopkeeper who did not like parking meters had dropped out of the race. Or, rather, she had been dropped off at prison after she was caught using an angle grinder to cut down every parking meter on the main street in the middle of the night.)

‘How do you intend to confront the rising crime rate, me mateys?’ asked Michael. He was playing the moderator. He only agreed to do the job on the grounds that he could do so dressed up as a pirate. So he was wearing an eye-patch and adding ‘avast thee’ or ‘me matey’ or a ‘ye scurvy dogs’ to all the questions.

‘Is there a rising crime rate?’ asked Nanny Piggins.

‘I don’t know,’ admitted Michael, ‘but that’s a question they always ask in political debates so you’d better have an answer.’

‘I think people should take more personal responsibility for their property,’ said Nanny Piggins. ‘You can’t rely on the police to do everything for you. The Police Sergeant is a busy man. I’m forever needing his help to get out of scrapes. So he can’t have his time wasted on trivial matters such as burglary and petty theft. If you’ve got nice things in your house and you don’t want anyone to steal them, here’s what you do . . .’

(I know it is extraordinary to think that a pig who was regularly blasted out of a military-grade cannon could have no idea what insurance was, but Nanny Piggins was so glamorous and charming that even though she often slammed into a pedestrian’s head at 60 miles an hour, she had never been subject to a public liability claim.)

‘Insurance is when you pay an annual amount to an insurance company, so that if something bad happens, for instance you get robbed or your house burns down, they will pay you lots of money to help replace things,’ explained Derrick.

‘That sounds an awful lot like gambling,’ said Nanny Piggins.

Nanny Piggins was very prudish about gambling because the Ringmaster had once bet that if he tampered with the trajectory of her cannon, he could blast her over the top of the Eiffel Tower. Of course Nanny Piggins had triumphantly sailed over the famous French landmark, but she was very cross to pass the Jules Verne restaurant at the top and not be able to stop for a slice of cake. She had been against gambling ever since.

‘Insurance sounds like you are betting that something terrible will happen to you,’ said Nanny Piggins.

‘No, I don’t approve of that,’ continued Nanny Piggins. ‘I believe that if you don’t want someone to steal from you, you should leave a large chocolate cake on your doorstep every night. Any thief would see the cake and stop to have a bite. After consuming one mouthful, they would find it impossible to resist the rest of the cake, and so would have to sit down and eat the whole thing. At which point they would be too full of food to do anything as athletic as climbing in through an upstairs bathroom window, and too grateful to the provider of the cake to ever dream of stealing from them.’

‘But
you
don’t do that,’ pointed out Michael.

‘Well, I don’t need to, do I?’ said Nanny Piggins. ‘If anyone ever had the temerity to break in here (as one fool did – for more information read Chapter 8 of
The Adventures of Nanny Piggins
), they would not be sitting down to bite into a cake, I would be biting into their shins.’

‘So you approve of vigilante violence?’ accused Derrick in his role as Mayor Bloomsbridge.

‘It’s where people take the law into their own hands,’ explained Samantha.

‘Oh, then yes, I certainly do,’ agreed Nanny Piggins. ‘I tremendously enjoy making citizens’ arrests. It takes all my strength of character not to arrest my two opponents for crimes against fashion.’

‘You’re assuming that the mayor and Father will be wearing bad clothes to the debate,’ said Samantha.

‘I think that is a safe assumption,’ agreed Nanny Piggins.

‘What would you do about education, ye scurvy dogs?’ asked Michael.

‘Why would I want to do anything about that?’ asked Nanny Piggins.

‘Why?’ asked Nanny Piggins. ‘Because so many people want to abolish it?’

‘No, the opposite. They always want the education system to be better so that their children will do better,’ explained Samantha.

‘But if everybody did better, then everybody would have to try harder and work more,’ said Nanny Piggins. ‘Surely it makes more sense just to carry on as we are now and let children relax a bit.’

‘I think voters like schools to do more, and have more equipment,’ explained Samantha.

‘But if teachers were better equipped to teach, where would all that teaching go?’ asked Nanny Piggins.

Derrick as the mayor just shook his head. He did not have an answer.

And as Mr Green was being played by an empty coat rack, he didn’t have an answer either.