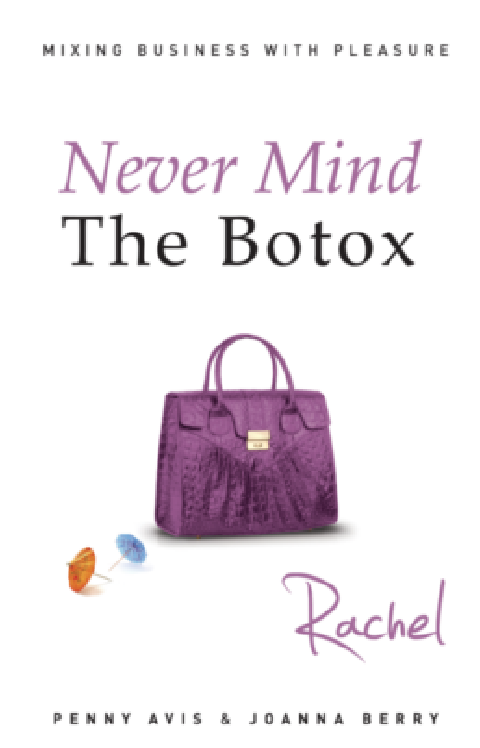 Praise for the Never Mind the Botox series:

“One of the best beach reads this summer - chick lit with a welcome twist.”

“The must-have read of the summer. A brilliantly biting novel that does for cosmetic surgery what Absolutely Fabulous did for fashion.”

“Injected with fierce and fab humour, it’s a must-read and our book of the week.”

“With plenty of glamour, pace and excitement, it’s a worthy beach read for anyone tired of the typical girl-meets-boy offerings.”
Heat Magazine

“With their own business experience the authors have created a top read - the first in a four part series.”

“The first in a series celebrating the lives and loves of four professional women ... good fun and a little bit different.”

“A rollicking summer read. If you’re looking for something to read on the beach this summer, then look no further.”

“A classic slice of chick-lit. The humour is sharp and indulgent and the characters are terrific. Can’t fault it.”

Apart from any fair dealing for the purposes of research or private study,

or criticism or review, as permitted under the Copyright, Designs and Patents

Act 1988, this publication may only be reproduced, stored or transmitted, in

any form or by any means, with the prior permission in writing of the

publishers, or in the case of reprographic reproduction in accordance with

the terms of licences issued by the Copyright Licensing Agency. Enquiries

concerning reproduction outside those terms should be sent to the publishers.

All characters in this publication are fictitious and any resemblance to real persons, living or dead, is purely coincidental

For our children, who delight and amaze us every day.

Rachel woke up with her hair sticking to the side of her face. Her head was pounding
and her back was aching from dancing in high heels. She felt beneath the duvet – knickers and a t-shirt. That was better than last week, when she’d woken up still fully dressed. She lifted her head and peered at the clock on her bedside table. Nine fifty-five. Christ!

‘Harry, wake up! It’s nearly ten o’clock.’ She poked the shape under the duvet next to her. Nothing moved. ‘Harry, come on. Get up!’

Rachel jumped out of bed and then quickly lay back down again as the room started spinning rather too fast. She should have been at work well before nine but Harry’s usual ‘just one more for the road’ trick was having its full effect. There was no way she could go in yet.

Rachel worked in corporate finance at a well established firm of city accountants and they would expect to know where she was. She leant over and picked up the phone.

‘Er yes, Pauline Rowe please.’ Rachel’s voice sounded like a darts commentator. She grabbed the glass of water on her bedside table and took a large gulp.

Pauline was the staff manager at Payne Stanley. She had a rather full opinion of herself and a figure to match. Things had been a bit frosty with Pauline since Rachel had indulged in a few too many drinks at the Christmas party and told her that she was an interfering busybody with all the interpersonal skills of a wardrobe.

‘Hi, Pauline, it’s Rachel Altman. You won’t believe what’s happened. I’m stuck in the communal hall of my flat. When I left this morning, I shut the front door and then realised I’d forgotten my keys. When I went to open the main front door that I share with the upstairs flat, I found it was double-locked. I can’t get out of the front door without my keys and I can’t get back inside my flat either. So here I am, stuck. What a nightmare! I’ve rung the landlord, who’s on his way over, but he was in North London and is not going to be here for another half an hour or so. So I guess I’m not going to be in until nearly lunchtime.’

From the tone of her voice, Rachel wasn’t sure that she did.

‘I shall let the partners know. Can you come and see me when you’re in?’ said Pauline.

‘Oh, it’s my stopwatch,’ said Rachel, frantically climbing on top of Harry to hit the snooze button. ‘I’ve got my gym stuff with me as, er, I’m training for a ten-k run in a few weeks.’

Harry let out a few grunting objection noises that Rachel tried to stifle with a pillow.

‘Anyway, thanks, Pauline. So sorry for the fuss; one of those really annoying things. I’ll let you know once I’m in. Bye now.’

Harry rolled over and opened one eye. ‘What was that all about?’ he said.

‘Work,’ said Rachel. ‘I gave them one of those fantastic excuses that’s so farfetched they just have to believe it, as no one would make something like that up.’

Rachel rolled on top of Harry and kissed his forehead. ‘Face it, I’m a genius,’ she said.

‘Really? Well, you’re very good at hiding it,’ said Harry, wrapping his arms around her waist.

‘I’m starving,’ said Rachel, rolling off Harry and gently pushing his arms away, ‘and in need of a serious injection of carbs.’

She grabbed the phone again and scrolled through the stored names until she found ‘Pizza’, which was shortly followed by ‘Prostitute’ − one of Harry’s ‘funny’ jokes.

‘The usual with extra pepperoni and a large diet coke, oh and some headache tablets. Cool, thanks, Marco. You’re a star. See you in fifteen minutes.’

Rachel got out of bed more slowly this time and headed for the shower. The clean white gleam of the bathroom made her feel slightly sick. Despite the frequent chaos in her life, Rachel hated mess. Her flat was modern and very tidy. She’d once been told that you can tell the state of someone’s mind by looking at their underwear drawer. Rachel’s was very organised, all sorted by colour and style. She often wondered what the drawer of someone with a terrible state of mind would look like. How bad could it get? Some unholy jumble of bras, tiny briefs and grey pants, probably. Feeling marginally restored by several cups of tea, slices of pizza and painkillers, Rachel eventually made it into the office at two o’clock. It was Friday and she’d decided to head home for the weekend. She’d used her gym bag instead of her usual pull-along overnighter case so she could keep up the whole ten-k story thing with Pauline. Typical of Harry not to have told her that he didn’t need to be up early and that he’d set his alarm for ten a.m. − never mind when she had to be up.

Harry made no secret of the fact that he was totally disinterested in Rachel’s job. He was a freelance writer, mainly writing sports stories for newspapers, so worked pretty much when he felt like it. As far as Harry could see, Rachel’s office job just seemed to get in the way of their social lives. He seemed to conveniently forget the steady income it brought in each month.

Rachel wandered through the open plan office with her gym bag strategically placed on her shoulder and went over to Pauline Rowe’s desk. Pauline had a pale blue cardigan on the back of her chair and pictures of cats on her desk partition. She was gossiping with the secretary at the next desk.

‘Hi Pauline, made it in now. So sorry, was totally my fault for forgetting my keys. Any plans for me for next week yet?’

Pauline looked at her watch and then up at Rachel.

‘Yes, Carl Stephens wants to see you. He’s got a new piece of work and I’ve told him that you’re free to help. He’s in this afternoon if you could go and see him. Ideally before you go to the gym,’ she added, looking at Rachel’s gym bag.

‘Well, I’m taking this ten-k quite seriously, so I need to get some decent training in.’

Mark Tan, an associate sitting a few desks away, overheard their conversation.

‘Hey, Rachel, which ten-k are you doing? I’m training with a few of the other lads in the office for one next month. Maybe you could train with us? We run before work a couple of times a week and then once after, usually on a Wednesday. What do you think?’

‘That sounds like a great plan to me,’ said Pauline slightly too quickly.

This is getting ridiculous, thought Rachel. Damn Harry and his alarm clock.

‘Thanks for the offer, Mark, but I’ve got my own routine pretty sorted out now and I don’t really want to start messing about with it. Anyway, better go: Carl Stephens wants to see me. See you later, Pauline.’

Pauline didn’t look up, so Rachel went to find Carl.

Carl Stephens was a senior partner. Rachel had worked for him a couple of times before and they’d got on pretty well. She knocked on his door.

Rachel looked around his office as he typed: pictures of the kids, a few books, a sporting trophy of some sort − the usual. Quite tidy too, she thought and then quickly had to get rid of the mental image of his underwear drawer. She looked at his side profile as he typed. He wasn’t bad looking, had probably been quite a catch when he was a bit younger. Stop! she thought.

Carl finished his email and spun round in his chair to face her.

‘Pauline probably told you that I want you to work with me on a new project,’ he said. ‘You have some time, right?’

‘Yes, I finished the report on the pet food business last week and I don’t think we’ll need to do any more on it for a while. The buyers are away for the next month or so. So I’m pretty free.’

‘Great. A good friend of mine from the Beau Street Group rang a couple of days ago. Have you heard of them?’

‘They’re a cosmetic surgery group, leaders in their field apparently. Anyway, they’ve been approached by some American buyers and they’re thinking of selling up. They want us to do a report for the Americans setting out how they make their money, which procedures are most profitable, which doctors are most successful, what sort of clients they have and so on.’

It was a big improvement on her last few projects. The pet food job had seen her rushing round the country reviewing the performance of grubby factories cooking chunks of meat of indeterminate origin. Before that she’d worked on the sale of an engineering company that made parts for buses. Hardly glamorous. This was much more like it.

‘I’ve agreed with the finance director that we’ll get a small team out there from Monday,’ Carl continued. ‘AJ and Rosa are both free too, I think, so they can go with you. I’ll forward you an email that sets out exactly what the report needs to cover.’

‘Okay, no problem. I’ll get organised this afternoon,’ said Rachel.

‘This will be an important job for you, Rachel. We’re really looking for you to show us that you can handle these key client relationships. You are the face of the firm and that face needs to be a professional one at all times. Do you understand what I’m saying?’