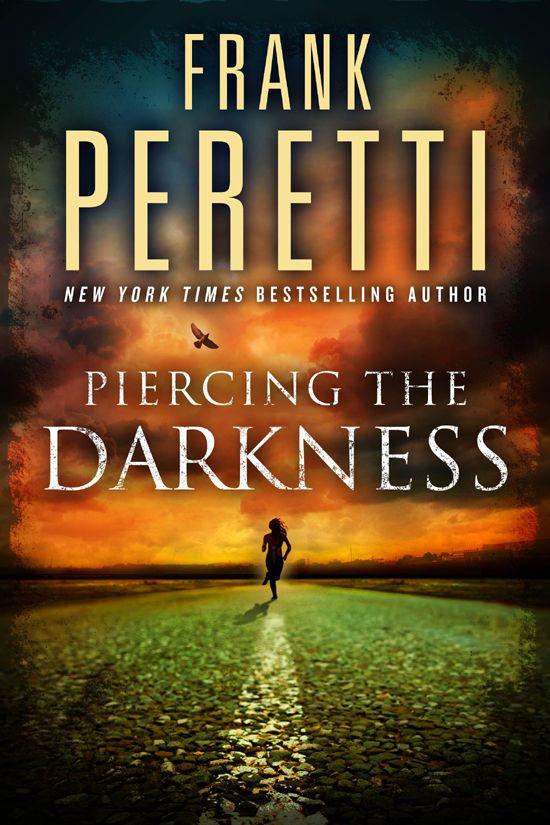 This sequel to
This Present Darkness
follows the supernatural battle over the small town of Bacon’s Corner, where, once again, armies of angels and demons are at war. Sally Beth Roe is trying to escape her past and struggling to find the truth, while Tom Harris finds himself embroiled in a battle to save a Christian school threatened by outside forces.

With more than 12 million novels in print,
Frank Peretti
is nothing short of a publishing phenomenon and has been called “America’s hottest Christian novelist.”
The Oath
(Word Publishing 1995), sold more than half a million copies within the first six months of release.
The Visitation
(Word Publishing 1999), was #1 on the CBA Fiction Bestseller list for four months. Peretti is a natural storyteller who, as a youngster in Seattle, regularly gathered the neighborhood children for animated storytelling sessions. After graduating from high school, he began playing banjo with a local bluegrass group. He and his wife were married in 1972, and Peretti soon moved from touring with a pop band to launching a modest Christian music ministry. Peretti later spent time studying English, screen writing and film at UCLA and then assisted his father in pastoring a small Assembly of God church. In 1983, he gave up his pastoring position and began taking construction jobs to make ends meet. While working at a local ski factory, he began writing
This Present Darkness
, the book that would catapult him into the public eye. After numerous rejections from publishers and a slow start in sales, word-of-mouth enthusiasm finally lifted
This Present Darkness
onto a tidal wave of interest in spiritual warfare. The book appeared on
Bookstore Journal
’s bestseller list every month for more than eight years. Peretti’s two spiritual warfare novels,
This Present Darkness
(1998) and
Piercing the Darkness
(1989), captivated readers, together selling more than 3.5 million copies.
The Oath
was awarded the 1996 Gold Medallion Award for best fiction. Frank Peretti and his wife, Barbara Jean, live in the Western U.S. In spite of sudden fame and notoriety, Frank still lives a simple, well-rounded life that includes carpentry, banjo making, sculpturing, bicycling and hiking. He is also an avid pilot. 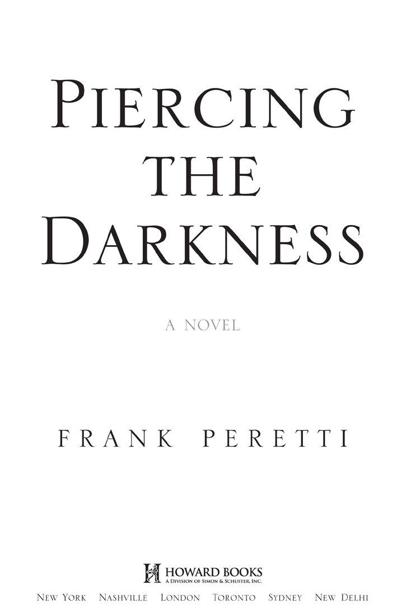 All rights reserved, including the right to reproduce this book or portions thereof in any form whatsoever. For information address Howard Books Subsidiary Rights Department, 1230 Avenue of the Americas, New York, NY 10020

HOWARD and colophon are trademarks of Simon & Schuster, Inc.

Thank you for purchasing this Howard Books eBook.

BY 1987, MY
first novel,
This Present Darkness
, was doing well enough to warrant a sequel. Crossway Books asked me how soon they could expect it. I was still working in a ski factory, so I considered how long it took me to finish the first novel and told them five years. They asked me how much I needed to live on. I told them, we shook hands and signed the papers, and that year I became a full-time writer, finishing
Piercing the Darkness
in time for Crossway to publish it in 1989.

The sequel was already forming in my mind while I was loading ski blanks into the molding machines. The world outside the factory walls was gobbling up the New Age. Spirit channelers were over-gesturing and speaking in silly accents on TV talk shows; movies and television, surely the most pervasive pulpit available for preaching a different gospel, were wasting no time in doing so; worse yet, Eastern mysticism and occultism were slithering into the schools disguised as all manner of ground-breaking learning techniques. I had no lack of subject matter. The trick was, as always, to find a story to contain it all.

By God-ordained coincidence, I met a Christian attorney who just happened to be handling a lawsuit against an elementary school in which children were being taught to meditate, visualize, and contact spirit guides in the classroom. We got together, brainstormed, and, working from real life, fashioned the legal case that would play such a huge role in the spiritual journey of Sally Beth Roe.

After fourteen years,
Piercing the Darkness
seems to me a little overstuffed, but it’s understandable. Fifteen years ago, I was discovering to my alarm the extent to which Satan’s people, systems, and institutions are networked and ready to carry out his plans, and I wanted to cover it all. Nevertheless, as we follow the invisible warfare swirling around the life of one wounded, searching sinner, the core message rings clear: No amount of lies, no matter how cleverly couched, will ever outstrip or outlast God’s truth, nor will any lie ever outreach His grace. The Lord knows those who are His, His sheep hear His voice, and the arm of the Lord is never so short that He cannot save.

I rejoice in that message. I’m proud of it, and always will be. I don’t mind at all being known as a Christian writer, because a Peretti book is always going to carry a Christian message, and by God’s grace, do it well. My greatest reward is knowing the message is being received and is making a difference in the lives of so many.

IT COULD HAVE
begun in any town. Bacon’s Corner was nothing special, just one of those little farming towns far from the interstate, nothing more than a small hollow dot on the AAA road map, with exit signs that offered gas, no lodging, maybe a little food if the place was open, and little more.

But it began in Bacon’s Corner.

It was a normal Tuesday evening. The workday was over, supper was on in most of the homes, the stores were locking up, the tavern was filling up. All the employees at the Bergen Door Company had clocked out, and the security guard was checking the locks. Mr. Myers’s son was bringing all the lawn mowers and tillers in for the night at the Myers Feed and Farm Store. The lights were winking out in the local mercantile. Two retirees sat in their chairs in front of the barbershop, putting in their idle hours.

The fields and farms right across the Toe Springs–Claytonville Road were getting warmer and greener with each day, and now the evening breeze was carrying a lot of mid-April smells—apple and cherry blossoms, plowed dirt, a little mud, some cattle, some manure.

It was a normal Tuesday evening. No one expected anything unusual. No one saw or heard a thing. No one could have.

But the commotion started behind a dismal little rented farmhouse just south of Fred Potter’s place—a flapping, a fluttering, a free-
for-all, and then a cry, a long, eerie shriek, an echoing, slobbering wail that raced into the forest like a train whistle through a town, loud, muffled, loud, muffled, moving this way and that through the trees like a hunted animal; then a flash of light, a fireball, blinking and burning through the forest, moving with blinding speed, right behind that siren, almost on top of it.