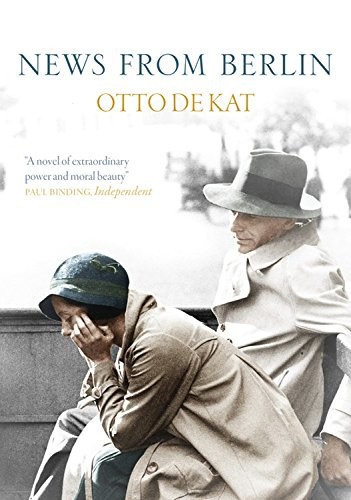 Translated from the Dutch by Ina Rilke

First published in the Netherlands as
Bericht uit Berlijn
by Uitgeverij G. A. van Oorschot, Amsterdam, 2012

First published in Great Britain in 2014

The moral right of Otto de Kat to be identified as the author of this work has been asserted in accordance with the Copyright, Designs and Patents Act, 1988.

Ina Rilke asserts her moral right to be identified as the translator of the work.

You can find this and many other great books at:
www.quercusbooks.co.uk
and
www.maclehosepress.com

Oscar had made the descent from the Lauberhorn to the village so many times that he could have covered the entire distance blindfold. Halfway down, at Hotel Jungfrau, he swerved to a halt, took off his skis and planted them upright in the snow with the poles looped over them. The wooden sun terrace was situated along the hiking trail to Kleine Scheidegg, in full view of the Jungfrau massif, a permanently snow-capped wall to shelter behind in times of peril. Lord Byron himself had visited the hotel at some stage, possibly drawn by the name, and wherever he went tourists would follow. The region was duly discovered: it was here that the English invented winter sports, then churches and hotels made their appearance, as did ski lifts and restaurants. And, typically for the British, a club was founded: D.H.O. – Down Hill Only. That was indeed the direction in which they appeared to be heading: a crumbling empire, a capital city barricaded, colonies under siege.

Oscar sat himself down on a long wooden bench, at a linen-decked table. He gazed out to the other side of the valley.
Half past three. The sun was still warm, the summits seeming higher and whiter against a cloudless sky. Eiger, Mönch, Jungfrau, the mountains he knew so well, their names a skipping-song going round in his head. He had lost count of the winters he had been there with Kate and Emma – even last year: quite a feat, considering it was 1940. How they had managed it was something of a mystery. Kate had come over from London, Emma and Carl from Germany, he from Berne. Planes werestill flying across a Europe in trepidation, trains were still running, the Swiss welcomed all and sundry. Since the attack on Poland not a shot had been fired, but the sides were drawn and armed to the teeth. All front lines were on red alert. War had been declared, but how to engage, where to start?

In the distance he saw aircraft flying in formation. They moved soundlessly, lost in the blue. The Jungfrau reflected only silence. Every voice was an intrusion, and people spoke in subdued tones, out of reverence for the panorama: an unfathomable expanse of snow, ally of Eternity.

The winter was splendid, but there were few skiers and hikers about. On the terrace were a scattering of Swiss and some Italians. Two tables down from his he noticed a woman on a bench, resting her head against the wall of the hotel. She must have slipped into her seat while he was talking to the
waiter. Oscar did not think he had seen her when he was undoing his skis. Was she dozing? She sat motionless, as though she did not belong there. She wore a bonnet of pale grey fur, and a red-and-white checked jumper. He was on the point of averting his eyes – he did not wish to be caught staring – when she took a pair of binoculars from the bag beside her and trained it on the Jungfrau. Oscar couldn’t help following her gaze. He saw nothing unusual on the mountain. She peered through the binoculars at length, now and then tucking a strand of hair behind her ear, half under her fur hat. In so doing she gave Oscar a better view of her face. It was not of this world; rather, it was of a higher order of reality. Her teacup remained untouched on the table, nor did he pour his own tea when it came. He wanted to see what she saw. Was she following a climber’s ascent to the summit? Had she spotted some rare bird? Was she scanning the slopes for avalanches? She looked upwards and he looked with her, then at her again.

The waiter brought him his order of
Rueblitorte
, and he paid the bill. He heard the thud of the hotel door closing, and the next thing he knew she was gone. The teacup was the only trace that she had been there. He cringed inwardly – how absurd to have been so fascinated by her. But her face, that unusual, winsome face.

During the night it snowed unremittingly, as though it would never cease. In the morning, with the snow still pelting down, skiing was out of the question. There was no wind. The few people about in the village had to grope their way ahead; the street lamps were of little help. Oscar had walked down from his hotel to call at his favourite café, diagonally opposite the cog-railway station. Here and there he allowed himself to slide a few paces, with one hand hovering over the wooden fence dividing the road from the long practice slope. His life snowed away from him, he felt both detached and exhilarated, a sense of letting himself go and of bereftness, a fluttery agitation, a devil-may-care wish to forget what he knew and what he had done. He had never known such heavy snowfall. The cog-wheel train would soon remain snowbound in the Lauterbrunnen sidings, leaving the village cut off. Which would suit him just fine. Barricades of snow, metres-high ramparts all around. Nobody going out or coming in. The wider world was a bookish notion, not real, far-off, a phantom, an impossibility. If only he could stay here, in the snow, in the impenetrable nowhere of a hidden village. With each step he sank deeper into the white, in a slow, euphoric haze. Nonetheless, his feet led him unerringly to his café.

It was busier than usual, with most of the tables occupied.
Just before shutting the draught door behind him he considered turning back again, into the snow. Right by the entrance there was a table, easily overlooked, which had one vacant chair.

She lowered the newspaper-stick with the broadsheet, behind which she had all but disappeared before, and motioned him to the chair. He recognised her at once, even though he had only seen her in profile.

“Not the kind of weather for binoculars today,” he said.

“You ski well for a foreigner.”

How did she know he was a foreigner? He noticed that she spoke an old-fashioned, precise sort of German.

“I saw you arrive yesterday, from my window.”

So she was staying at Hotel Jungfrau.

She had seen him before he saw her. Insignificant detail, incalculable consequences. The faintest impulse can precipitate an avalanche. She had put her book down, she had taken her binoculars and her sunglasses, she had gone down the corridor, then the stairs, she had asked a waiter to bring her tea. Sunshine. The endless view, the mountains zooming up close in her binoculars. He had been seated to the side, her eyes had not lit on him.

Oscar’s thoughts arranged themselves into a semblance of
order. Still dazzled by the snow, and by the woman’s nearness, he ordered coffee.

“It won’t be easy finding your way back to the hotel,” he said as she moved to resume reading the newspaper.

“So I realised when I was halfway here,” she said calmly, lowering the paper and glancing outside. “But I couldn’t stop, I couldn’t bear to turn back. A question of narrowed consciousness: all you can do is go forward, your head feels light, you aren’t thinking rationally. There’s nothing but silence, and the crunch under your boots.”

Oscar listened to her voice, not to what she was saying. Heard what had long been forgotten, or repressed. Resonances of something from the distant past, of being carried away, of a girl who took him outside of himself and never delivered him back. Sixteen he had been, and consumed by a wondrous love. He had not told anyone, not even his brother, the brother who was his only friend. Not her either. He would not have known how to tell her he loved her. Love had caused some kind of irreversible shift within him. He had found himself strangely removed from everything that had been perfectly normal only a short time before.

In any case, he would have been incapable of explaining it to her. He had kept her name secret, had never uttered it
aloud, for fear of losing her, which had promptly happened. Strange, the way love could also leave you feeling cut off, depleted, making everything meaningless and irrelevant.

The woman regarded him across the table. He saw her eyes for the first time. Only for a second, due to the waiter bringing the coffee and the people squeezing past the back of his chair. Distractions that were not unwelcome. Her eyes were like her voice – challenging. They took him way back, an eternity back, to the ice covering the base of his memory, smooth as glass, and creaking. Treading gingerly on the first ice of the night, over a thinly frozen pond fringed with weeping willows. The girl’s embrace, on the way to school. A fleeting interlude of happiness, forged into a short story years later. No, he did not feel challenged, it was different, nothing to do with pressure or being called to account. Her face and her eyes held him fast, he could not have left even if he had wished to.

Beside him there was laughter, the door kept swinging open and shut, snowy overcoats hung all over to drip. Café Eiger was the hub, the haven for those brave enough to venture out of doors. Soup, coffee, hot chocolate,
Schnapps
, cake, good-humoured waiters bearing trays. The mood was resolutely festive, no-one dreamed of going home. Oscar pointed to the snow falling outside, and asked whether he might order her
something else. Yes, he might. The corner they occupied was near invisible to the staff. He took her newspaper and raised it at an angle, stick and all, to attract a waiter’s attention. She gave him a quizzical look, because she was also holding the newspaper-stick, and because he seemed utterly unabashed by this. As if they were putting out a flag together. Until he realised that he was signalling the waiter with
her
hand, and quickly let go. The newspaper sank, the flag was furled. Oscar placed the contraption on the table between them, and laughed.

Murder by Mistake by Veronica Heley
What a Carve Up! by Jonathan Coe
The Funhouse by Dean Koontz
Crazy by Han Nolan
Custody by Nancy Thayer
Emily's Vow by Betty Bolte
Code of Silence: Cosa Nostra #2 by Denton, Jasmine, Denton, Genna
A Love Like No Other by Maggie Casper
Pop Rock Love by Koh, Raine, Koh, Lorraine
Milk Chicken Bomb by Andrew Wedderburn