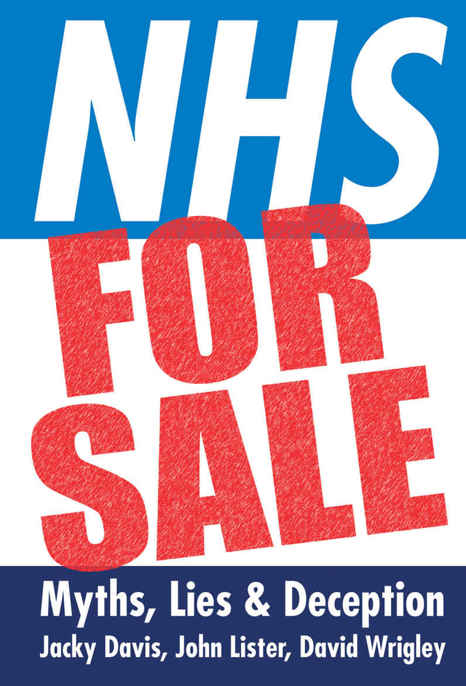 All rights reserved. No part of this publication may be reproduced, stored in a retrieval system, or transmitted in any form or by any means, electronic, mechanical, photocopying, recording or otherwise, without the prior permission of the publisher.

2 Myth: the NHS is inefficient and unaffordable – it can’t go on like this

3 Myth: our NHS reforms will mean more choice for patients

4 Myth: our NHS reforms will put GPs in the driving seat

5 Myth: our NHS reforms will reduce bureaucracy and save money

6 Myth: our NHS reforms will give more power and voice to local people

7 Myth: our NHS reforms will make the NHS more transparent and accountable

8 Myth: the private sector is more efficient and cost-effective than the public sector

9 Myth: we are not privatising the NHS

10 Myth: we will cut the deficit not the NHS

11 What they don’t want us to know

For much helpful and generous advice, our thanks go to Anna Athow, Prof. Colin Crouch, Prof. Colin Leys and Prof. Ray Tallis; we thank Peter Phillips and Glenda Pattenden for the cover concept and design, and tender particular thanks to Harry Smith for the foreword, Prof. Martin McKee for the introduction, and Tamasin Cave and Paul Evans for their contributions on the health lobbying industry and on NHS vital statistics under the coalition.

CHC
Community Health Councils, abolished in England in 2003; they continue to work in Wales,
http://www.wales.nhs.uk
sitesplus/899/home.

CHPI
Centre for Health and the Public Interest,
http://chpi.org.uk/
.

OOH
Out of Hours.

UNITE
Britain’s biggest union with 1.42 million in every type of workplace.
http://www.unitetheunion.org/
.

An announcement has been made that hundreds of government websites will be moving to the gov.uk website
https://www.gov.uk
.

Over ninety years have passed since I was born in the barbarous year of 1923 in the coalmining community of Barnsley. As the light fades on my life, I am drawn towards the narrow cobbled streets of my early life that were fraught with poverty and sickness. Back then existence was a hard scrabble battle for many Britons because we lived in a primitive era when there was no NHS and good health care was a privilege that only the rich could afford.

In the winter of my years, I don’t reflect upon my boyhood with nostalgia. It’s impossible since I learned too early in my days that life for those who can’t access a doctor or medicine due to financial circumstances can be a brief and sad affair. You see, in 1926 when I was a small lad my sister Marion contracted TB and died in a workhouse infirmary because my dad, who had worked as a miner since the age of twelve, was too poor to provide medical care for his daughter on a working-class salary.

Tragically during my childhood in the early twentieth century thousands met their end like Marion. I can even remember as a boy hearing the piercing cries from open windows on our street of people dying from cancer who didn’t have the dosh to buy morphine to ease their passage from life. To this day, I am haunted by the inhuman manner in which my sister’s illness was treated or how the society of my youth believed that only the well-to-do or well-connected
deserved medical care.

That is why after the brutality of the Second World War my generation of ordinary people demanded that our nation create the NHS. We knew it was our only hope of making life better for ourselves, our parents and our children.

The people of my generation sacrificed so much during the Great Depression and through the Second World War and the NHS became our peacetime dividend. The creation of the NHS was also our solemn pledge to future generations that we would be a civilized nation that would treat all citizens as worthy of care and compassion. The NHS is for me as great as Magna Carta because it freed millions from the tyranny of sickness and poverty to move forward and lead productive lives. We must remember that the NHS is as essential to our nation’s well-being as the armed forces are to protect us from foreign threats.

It is why today we ordinary citizens must be vigilant against governments and corporate interests that seek to dilute the NHS’s ability to deliver health care to all its citizens through privatisation. I am one of the last remaining people that can remember the cruelty of life before the NHS, and I can assure you that it is essential for Britain’s prosperity and social well-being that my past doesn’t become your future.

How did we ever let it happen? When the then Health and Social Care Bill was passing through parliament (or perhaps one should describe it as drifting, pausing on occasions for a rest, as it is now clear that the attention of the parliamentarians who were meant to scrutinise it was elsewhere), I used the pages of the
British Medical Journal
to ask whether anyone actually understood what the government was hoping to achieve.
1
The Secretary of State’s response was not reassuring, suggesting confusion even at the highest levels of government.
2

Parliamentary draughtsmen are not renowned for the quality of their prose, so they could be forgiven for some of the more turgid stylistic aspects of the Bill. What they are supposed to be good at, however, is rendering complex and often contradictory intentions into clear, explicit, and unambiguous rules. In this case, they failed abysmally. Yet the fault was not theirs. They had been given the impossible task of creating order out of chaos. The result, as has now become abundantly clear, is an Act that is in many respects incomprehensible, frequently contradictory, and causing those who must implement it to scratch their heads in bemusement as they struggle to decide whether what they are doing is even legal, let alone sensible.
3

State of Emergency by Marc Cameron
06 - Rule of Thieves by C. Greenwood
The French War Bride by Robin Wells
Predators I Have Known by Alan Dean Foster
The Queen's Margarine by Wendy Perriam
Flame and Slag by Ron Berry
Birthmarked by Caragh M. O'brien
Flunked by Jen Calonita
The White Fox Chronicles by Gary Paulsen
Kendra by Coe Booth