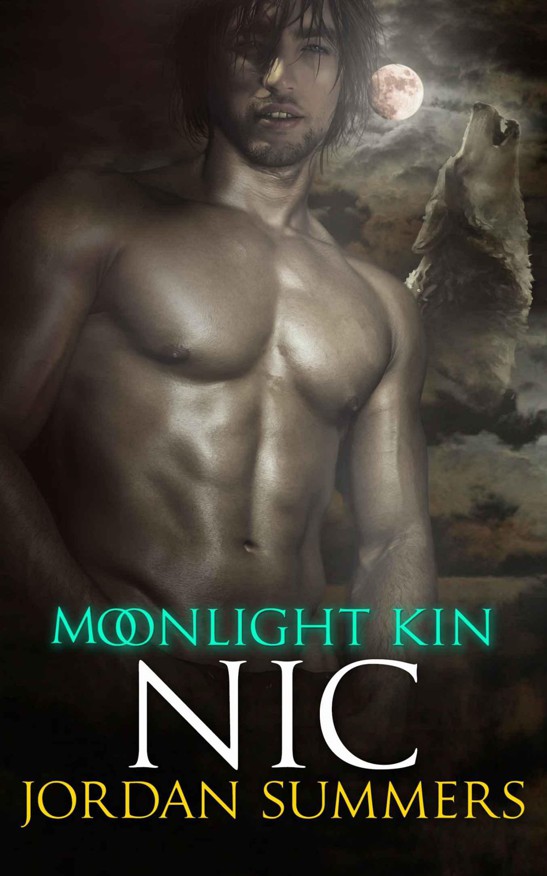 Werewolf Nic La Croix has been nursing a bruised heart ever since he fell for his Alpha’s mate. The last thing he wants is to play white knight for a human female who has no business being in a shifter bar.

Mindy MacDougal has spent most of her life being her big sister’s keeper. Just once she’d like to do something for herself. When a night on the town takes a deadly turn, an unlikely hero comes to her rescue. One kiss is all it takes to draw her into Nic’s dark world. What will Mindy do when she finds out that the monster isn’t under her bed, he’s in it?

This book is NOT intended for young readers. It contains adult content.

Werewolf Nic La Croix has been nursing a bruised heart ever since he fell for his Alpha’s mate. The last thing he wants is to play white knight for a human female who has no business being in a shifter bar.

Mindy MacDougal has spent most of her life being her big sister’s keeper. Just once she’d like to do something for herself. When a night on the town takes a deadly turn, an unlikely hero comes to her rescue. One kiss is all it takes to draw her into Nic’s dark world. What will Mindy do when she finds out that the monster isn’t under her bed, he’s in it?

This ebook is licensed for your personal enjoyment only. This ebook may not be re-sold or given away to other people. If you would like to share this book with another person, please purchase an additional copy for each person you share it with. If you are reading this book and did not purchase it, or it was not purchased for your use only, then you should return to the publisher and purchase your own copy. Thank you for respecting the author's work.

Other Books by Jordan Summers

A shadow of ash spread across the highway, staining the asphalt a deeper shade of gray. Fissure cracks appeared, threading their boney fingers wide until the earth bucked beneath Jerry Seaver’s semi-truck. He clenched the wheel and fought to keep the heavy load from jackknifing on the road.

“Damn earthquakes,” he muttered under his breath, but his heart continued to pound.

Thunder cracked in a cloudless blue sky. Jerry poked his head out the window. He squinted against the sunlight and looked around, but the only thing he could see was a green ocean of trees rocking gently in the breeze.

The fine hairs on his arms rose, along with the pressurization in the cab of his truck. Jerry’s ears popped. His unease increased despite the natural beauty around him.

He wiped his hand across his grit-covered face and it came away moist. The highway stretched out in front of him with no cars in sight. There wasn’t a town around for miles. Jerry was alone. The sudden change in the air reminded him just how isolated he was on this back road. Suddenly the shortcut he’d taken wasn’t such a good idea.

He shifted gears and pressed his foot down. Smoke billowed out the semi’s exhaust pipes as the engine strained to pick up speed. Jerry didn’t want to be out here surrounded by oppressive woods any longer than necessary.

A half a mile in front of him the air shimmered like waves on a pond. It was too cool for the mirage to be heat rising from the asphalt. Jerry’s foot eased off the accelerator and the truck slowed, but he wasn’t about to stop. The glistening increased and the air yawned, opening wide to reveal its gaping black mouth.

“What the hell?” Jerry leaned forward to get a better look at...at...he had no idea what he was seeing. The sun gleamed off his red hood, but didn’t penetrate the dark entrance ahead.

It wasn’t real. It couldn’t be.

Jerry rubbed his eyes and shook his head. He’d been driving for ten hours and hadn’t gotten much sleep the previous night. He was determined to get to Vancouver today.

The crisp air worked to keep him awake, but wouldn’t prevent hallucinations. This had to be one, because what he was witnessing didn’t make sense.

He reached for his Red Bull and took the last sip. Moisture dribbled down his chin onto his shaggy beard. Jerry wiped his mouth with the back of his hand, then crushed the can and tossed it over his shoulder before grabbing another out of his cooler.

Jerry pressed the cold can to his forehead, then popped it open. He took a deep swallow, then checked to see if the
hallucination
still hovered above the road.

The tear had widened, revealing more of the gloom. If it got any bigger, it would swallow his truck. Something moved in the shadows. Fear plunged its icy fingers into him, locking on to his spine.

The gap expanded and someone—no,
something
—fell out, then the opening snapped shut.

Jerry was too close to stop and too scared to react. His truck barreled down upon the...he squinted...
creature
, striking the black mass. A loud bang filled the cab as the shadowy thing smacked the grille and flew through the air, landing on the side of the road.

He glanced into his side mirror to see where it had gone. The black creature rose, took a few steps, then collapsed in the lane.

Jerry crossed himself and prayed that it was dead. Whatever he’d struck wasn’t human, wasn’t of this world. He had seen where it had come from with his own eyes and he wasn’t about to stick around to find out if it was okay. With his heart in his throat, Jerry shifted gears and tore down the road.

An hour later, he pulled his rig into the truck stop and washed the blood off the grill. By the time Jerry Seaver reached Vancouver, he had convinced himself that he’d imagined the whole incident.

Mindy MacDougal stopped her car next to the curb. Celina Gibson opened the passenger door and handed her the pepperoni pizza, then climbed in.

“I don’t know if I can wait until we get to the house to have a slice,” Mindy said.

Celina buckled her seatbelt, then reached for the warm box. “If I can wait, you can wait.” She glanced at Mindy. “Isn’t that Izzy’s shirt?”

“Can’t believe she let you wear it. I tried to borrow it one time and she threatened to break my fingers.”

“Yeah, Izzy is weird about sharing things. She never wants anyone to wear her clothes or use her stuff. Said it made them smell funny.” Mindy laughed and put her blinker on, then pulled away from the curb. “If she didn’t want me to wear her clothes then she shouldn’t have left them in the closet when she moved out.”

Mindy squeezed her hand. “I know you miss her, too.”

Celina and Isabel had been best friends for a few years, then this last year Izzy pulled away. It was a pattern she repeated when anyone got too close. To soothe Celina’s hurt feelings, Mindy had stepped in as a surrogate for her sister. She wasn’t as good company as Izzy, but she did her best.

“She was always threatening to move. I just didn’t think she’d go through with it. I mean, where else is she going to get such a sweet setup?” Celina asked.

“What do you mean?” Mindy glanced at her.

“You paid her rent. You did her laundry. You bought all the food. Isabel never had to do anything while you were around.” Bitterness tinged her tone.

Mindy’s face heated. “It was my choice. She never asked me to do any of those things.”

“She never had to,” Celina retorted. “Wish I had a younger sister like you.”

Mindy sighed. How could she explain in a way that Celina would understand?

She hadn’t always been the responsible one. There was a time when she and Izzy had been footloose and carefree. That was before Izzy’s penchant for outlandish storytelling took a dark turn, before the expensive psychiatrists, before the psych meds, before all the experimental treatments.

Nothing their parents tried could eliminate Izzy’s “visions” or quell her talk of monsters. To this day, her sister was utterly convinced of their existence.

The treatments did succeed in one area. They successfully changed Mindy and Izzy’s relationship. Her role in the family dynamic evolved from close ally to her sister’s keeper.

The change hadn’t been easy for Mindy. At first, she’d chafed at carrying so much responsibility. She missed her freedom. She missed having fun. But there was only room for one bad girl at the table and Izzy had claimed the spot.

Now that Izzy was gone and Mindy was finally free, she didn’t know quite what to do with herself.

Celina chewed on her bottom lip. “Did she at least say goodbye before she left?”

She did her best to hide her pain, but Mindy didn’t think she was successful. “You know my sister. Goodbyes are so...responsible. She called you, though, didn’t she?”

“Yeah, but she didn’t tell me that she’d moved out,” Celina said.

“Then what did she say?” Mindy asked.

“She told me to watch out for the monsters,” she said.

Mindy rolled her eyes. “What’s that supposed to mean?”

Celina shrugged and looked away, but not before Mindy saw fear in her eyes.

“Don’t let her freak you out,” she said.

“You know, this might turn out to be a good thing in disguise,” Celina said. “You’ve been taking care of your sister for years. Izzy could do with a serious dose of reality.”

Mindy knew she was right, but it would take some time to adjust to all the changes.

“She’s your big sister. It’s past time that she acts like it,” Celina said.

“We’re only a year apart,” Mindy said. “Not exactly a huge gap.”

“Doesn’t matter. She’s still older,” Celina said. “Have you heard from her since she left?”

“She called Wednesday night, but I was at school,” Mindy said.

“Did she at least leave a message?”

“Uh-oh. What did she say?” Celina asked.

Mindy sighed. “Maybe you can make sense of her message. She said the winds told her it was time to move on. That there was darkness coming.”

Celina’s perfectly shaped brow shot up. “The winds? Darkness? Last time I checked, wind didn’t talk. And darkness”—she looked out the window—“comes every night. Did she tell you anything useful? Like where she was going?”