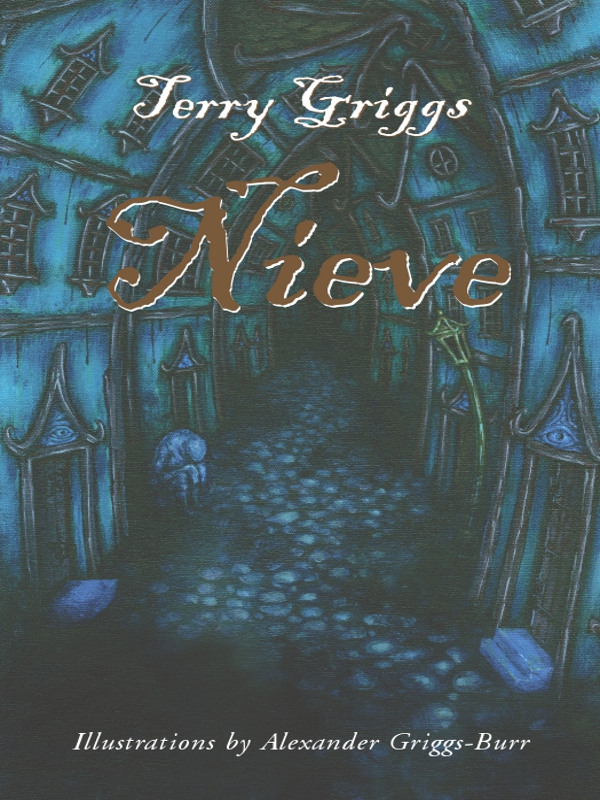 Thought You Were Dead
(Biblioasis, 2009)

All rights reserved. No part of this publication may be reproduced
or transmitted in any form or by any means, electronic or mechanical,
including photocopying, recording, or any information storage and
retrieval system, without permission in writing from the publisher.

Biblioasis acknowledges the ongoing financial support of the Government
of Canada through The Canada Council for the Arts, Canadian Heritage,
the Book Publishing Industry Development Program (BPIDP); and the
Government of Ontario through the Ontario Arts Council.

PRINTED AND BOUND IN CANADA

A Few Words from the Chairman

There had been signs, and although she hadn't taken them as such, she hadn't completely dismissed them either. Superstition was Gran's department. Nieve was more of a let's-wait-and-see person, more of a let's-not-jump-to-conclusions person. In the pond behind her house she'd seen something she couldn't identify. It was long and black and moved sinuously in the water like a long scarf swirling around and around and up and down. She got down on her hands and knees to look at it . . . it moved as one, but it was many. Hundreds of black fry all moving in concert, as if following a single thought. Little fishes, she said to herself, standing up and brushing the mud off her knees. Practicing their synchronized swimming. Not so strange, really. Although she had to admit that she'd never seen them in the pond before.

What else? Spiders. Nieve had nothing against spiders. She liked them very much in fact. A spider here, a spider there, interesting. But lately there had been spiders here there everywhere . . . dangling from Nieve's toothbrush when she raised it up to brush her teeth before bed, scrambling out of her pockets when she slid in her hand to retrieve a piece of string or a marble, dropping on her head from the beams in the ceiling when she zoomed by underneath. Spiders, spiders, spiders, all sizes, all kinds. Gran said that it was bad luck to kill a spider, and Nieve would never have done that anyway, bad luck or no. So she was being extra careful not to squash any by mistake. This required some cautious walking, and running (her favorite form of locomotion), and much paying attention to tiny things that skittered by.

She saw a tiny thing skitter by that was NOT a spider. It looked more like an elongated spider's
shadow
. But as shadows don't run free on their own, she didn't want to think that it was. That would be jumping to conclusions.

One: Nieve's big, orange cat, Mr. Mustard Seed, shot through the door one morning with his fur sticking out all over as though he'd been electrified. He didn't stop for his usual pat-pat on the head, or Nieve's cheery greeting, or, even more unusual, for his breakfast (Mr. Mustard Seed never missed breakfast). He ran straight to his hideout, an old breadbox that was stored in the deepest darkest farthest part of the basement, and wouldn't come out. Nieve eventually brought him a bagful of cat snacks, which she poured into the breadbox after shooing away a couple of spiders. They scurried away over the lid. (In the deepest darkest farthest part of the basement one
expects
to encounter a few spiders.) Mr. Mustard Seed thanked her by mewing once, quietly and tremulously. 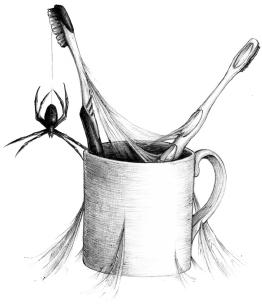 Two: Her parents' business had suddenly picked up. Not a bad thing in itself, as it brought some decent desserts into the house.
And
a new, nifty, lime green shirt for Nieve. Not that she overvalued trendy clothes and name-brand runners and all that, but the odd cool item was useful, even necessary. She could hold her head up in school and not be marked for ridicule as some unfortunate kids were. When Alicia Overbury cooed,
Oooooooh, I liiiiikkkke your shiiiiiirt
, Nieve responded by nodding curtly and saying,
Yeah, thanks,
I like it, too.

So the problem with her parents' new popularity had more to do with the nature of their employment itself. They were professional sympathizers. Their business ad went like this:

Feeling troubled, feeling low,
Lost your dog, lost your job,
Don't know which way to go?
Need a hand to hold, or a Tissue for your nose?
A pat on the back, a hug, a rose?
Call Weepers & Co.
Friends-in-Need Support Services.

They had a sliding pay scale with hugs ranging from 50 cents to a dollar and up, depending on how long they lasted, and with pats on the back and shoulder squeezes costing 20 cents each. Sympathetic murmurs were a bargain, although copious tears and custom-designed indignation on the client's behalf were pricey.

Nieve and Gran â who were a lot alike in many ways, except for the superstitions â both thought that this was a really dumb line of work. Although there was clearly a call for it, and lately there seemed to be an overwhelming call for it. That was the troubling thing.
I wonder why more and more
people are unhappy?
Nieve thought, tucking into the fancy chocolate torte that her dad, Sutton, had brought back from the city. She felt pretty good herself . . . except for a little niggling uneasiness crawling around in the pit of her stomach. And it wasn't from eating too much rich dessert, even though she had.

“Hey, nothing to worry about, En.” Sutton poured himself a coffee, while wiping the tears from his face with his shirt sleeve. (He'd been rehearsing for an important sympathy gig.) “Like the torte?”

“Great,” he said, and left the kitchen.

Given their profession, Nieve's parents were remarkably unsympathetic on the homefront, but being understanding and lovey-dovey could get tiresome, she reasoned, especially if one had to dish it out all day long.

Three: This was the worst of all. The very worst. It had happened to Doctor Morys, who was the funniest, smartest, nicest man in town, and who had delivered all the babies for the past fifty years, including Nieve and her parents, and all of Nieve's friends and their parents. She got fidgety and upset just thinking about it, but she had to think about it because it wasn't right. It was fishy. Not that she'd connected it up with all the other not-right things that seemed to be happening. Not exactly.

“He was
old,
” said Alicia Overbury cooly. “I wonder what the new doctor will be like? Dreeeeamy, I bet.”

“Dreamy?” Who'd want that, Nieve thought? You might go to him with a stomach ache (like the kind she had right now) and he'd give you the wrong medicine. “We might not even get another doctor. Besides, Dr. Morys isn't
that
old.”

“Collapsed?” said Gran, when Nieve ran up the hill to tell her. “James?”

“Right in the middle of telling a joke,” Nieve nodded. “The one about why ducks fly south to Florida every year. Rob Cooper had already started groaning because that one's so corny, and then all at once Dr. Morys got this puzzled look on his face and reached out with one hand like he was grabbing at something and then he fell down. That's what Rob said.”

“Alive, but in a coma. Mayor Mary rushed him to the city in the ambulance.” The town ambulance was actually an old station wagon.

“Jim.” Gran sat down very slowly at the kitchen table. “Jimmy.” Every time she said Dr. Morys' name it got younger and fonder. He and Gran were great friends and had been for years. Although neither of them were old, Nieve thought, not
dying
old.