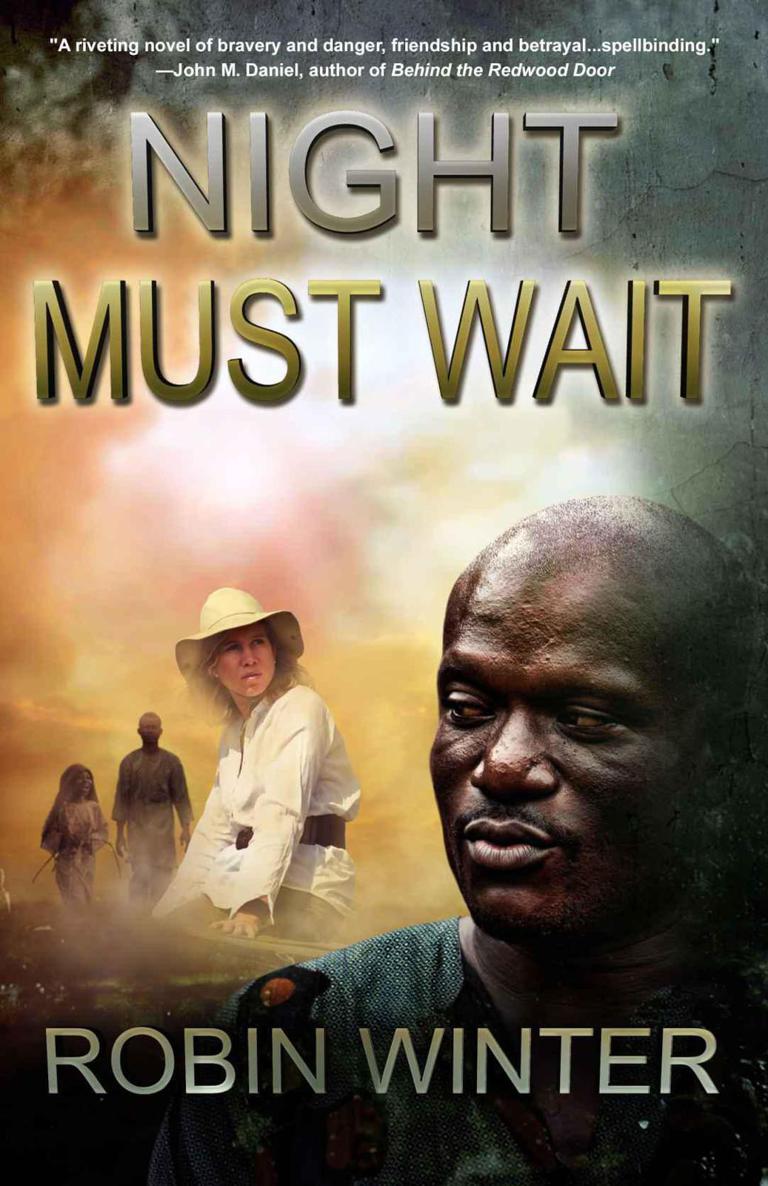 Four best friends--one is a liar and a murderer…

In the mid-1960s, Kate Wilton, an extraordinary painter who could mimic any of the great artists, sells her three friends the dream that anything is possible in Nigeria, including wealth and fame. None of these brilliant, ambitious women comprehend that civil war will blow their world asunder. They should be careful what they wish for.

Gilman practices medicine--a miracle worker in rural villages--and finds love with a mercenary in the chaos of battle. Lindsay buys up debts of important men, and under the cover of a U. S. Embassy job consolidates influence with a private web of spies. And Sandy discovers she can become the woman she thought unattainable, in a place that never demands she grow up.

One of these four is willing to sacrifice the others…

Robin started writing with a fully illustrated manuscript on 'Chickens and their Diseases' as a second grader in Nigeria. In 1967 she and her family were evacuated as the Nigerian Civil War began.

As a child she lived in a number of places beginning with 'N'--Nebraska, Nigeria, New Hampshire and New York. Now living in California, she has no intention of going back. She has published short stories under the name Robin Tiffney.

Her other career centers on oil painting--both landscape and figure. Her husband, a paleobotanist, corrects the science in both her paintings and her writings, and has acquired considerable skill in ducking flying objects. They have a teenage daughter who also loves to write, and three cats that don't.

No part of this publication may be reproduced, stored in a retrieval system, or transmitted, in any form or by any means, electronic, mechanical, photocopying, recording, or otherwise, without prior written permission from the authors.

This is a work of fiction. Names, characters, places and incidents either are the product of the author's imagination or are used fictitiously. And any resemblance to actual persons, living, dead (or in any other form), business establishments, events, or locales is entirely coincidental.

Praise for Night Must Wait

"Set in the mid-1960s, at a flashpoint in Nigeria’s volatile new post-colonial history,
Night Must Wait
is a riveting novel of bravery and danger, friendship and betrayal. Four young, white American women have come to this land of opportunity to find their separate futures. What they find is civil war at the national and personal levels. Robin Winter’s spellbinding story is taut with surprise." —John M. Daniel, author of
Behind the Redwood Door

"Four women’s lives interweave in a complex, compelling narrative. Deep, insightful characterization, rendered in elegant prose. A strong sense of place. The heat and the horror of war comes through in every line. The sweep of the cultural landscape is overpowering." —John Reed, author of
Thirteen Mountain

"
Night Must Wait
is a knockout. Robin Winter really delivers the goods with her twisting tale of four ambitious women, good intentions gone awry, and civil war in Nigeria." —Norb Vonnegut, author of
The Trust

"
Night Must Wait
is a novel of beauty and brutality as complex as the history of Nigeria and as subtle and passionate as the characters who inhabit this powerful work." —Jervey Tervalon, author of
Understand This

"Robin Winter’s portrait of a world unraveling into chaos is equal parts harrowing and elegant, a master work of fiction. Reminiscent of Denis Johnson’s
Tree of Smoke
, and more than comparable, her novel is quite astonishing." —Monte Schulz, author of
This Side of Jordan

"The world Robin Winter takes us to in
Night Must Wait
is not the fantasy of Dorothy and Toto, no longer in Kansas; it is the scary, all too-real Africa. The women pushing the story forward are light years beyond Dorothy, facing down personal and political demons of the twenty-first century." —Shelly Lowenkopf, author of
The Fiction Writer's Handbook

For my parents, who took us to grow up in the wonderful land of Nigeria. We do not forget.

I started writing this story in 1976, and though it still takes place mainly in Nigeria, it evolved into a completely different novel.

Beginning at McAfee and continuing to Santa Barbara, I'd like to thank all the people and institutions that helped me with references, resources and opinions.

The Wellesley College Library, the Harvard Kennedy School Library, the libraries at Yale University, the University of Nigeria, Nsukka Campus Library, libraries whose names I cannot even remember now and, of course, the authors of all the books and papers I read about Nigeria and the Nigerian Civil War.

I owe a great debt to two gentlemen I met in Murtala Muhammed Airport, circa 1977, who talked to me for hours about experiences as soldiers in the war. I never knew their names.

I owe my writers' groups, willing and wonderful readers, especially Ted, who read this novel multiple times with inspired insight. And a heartfelt salute to Susan, in this from the start at McAfee.

My gratitude also to my many fellow writers from the Santa Barbara Writers Conference.

To Professor Hortense Spillers, who once said, "An education is supposed to make you dangerous women;" thank you for your generous inspiration and help.

Most of all, Bruce, for his infinite patience; Theo, for listening; and my agent Toni Lopopolo, who edited and re-edited this book, from first to last page, more times than either of us can recall, with unflagging good cheer and a vicious red pen.

His feet hit the cold floor before he knew he woke. Had he heard shots? He clicked the bedside lamp, but no light—no power. He clawed to get his glasses and slippers on.

The bedroom door burst open, flashlights blinding, slanting across curtains, table and bed. Throat clogged with terror, his voice came thin, words garbled through the confusion of shattered dreams. "Who are you? What's going on?"

Men jerked him into the hallway. Soldiers, uniforms, weapons in his home. Smell of gunpowder, acrid.

He tried to catalogue faces.

Hands took the spectacles from his face, the house around him swelled out of focus, dim with only the porch light shining in the front door. A lieutenant pushed him out, towards a waiting pair of cars.

Soldiers—efficient, professional. All in uniform. They spoke English, not Igbo, but he knew their tribe.

"I hope you have not hurt my friend?" He managed to slow down his speech so it came clear, so he sounded measured, in control. He smelled the wet night, the early rain drenching the leaves, felt the mud soaking his slippers.

What were those shapes there in the shadow by the wall?
Where was his poor friend? They'd sat up late, talking, sharing jokes and food. He could remember the smell of the fried chickpeas, taste the salty memory of them in his mouth.

"Sir, please enter the car." The young officer in full military uniform courteously settled him into the back seat, as though he had no automatic trained on his every move.

If he had to die, please, not in his night clothes.

These young men broke his heart. How could he tell them he was no enemy? Any coward could mouth such promises. Why would they believe him? For all his English education and the title bestowed by the English Queen, he could find no words.

He slid into the back seat, obeying the gesture of their guns. He heard himself gasping. His sight dimmed. He looked down at his hands, saw one grasping the back of the seat before him. Slippery with sweat.

A small noise, familiar, the light tinkle of spectacles hitting the driveway. How many times had he dropped them himself.

A different sound—the crunch of glass.

Sandy took a long swallow of screwdriver from her chipped mug, the bite of vodka strong against the bottled orange juice. Not the season for ice, and not the place for crystal, here in Wilton's dorm room after hours. Yellow light cast the three other faces into chiaroscuro, a Georges de La Tour composition of women—an image for Wilton to paint some day. If Sandy got rich, she'd buy it. Wilton, the genius, could paint anything, mimic every artist in the art history class where they'd first met.

Since two Kates and a Katherine already lived in the dorm, Kate Wilton became "Wilton." Blonde pre-med Katherine Alexandra Gilman became "Gilman." And she, one of three Sarahs, became "Sandy," appropriate for a geology major.

In the best chair sat history major Constance Lindsey Kinner, who'd once said, "It's one hell of an assumption to call a woman by her first name just because she's going to marry away her birthright surname." After that they all called her Lindsey.

Sandy stretched out on the floor, content, twisting the end of her red braid like a cat playing with its tail. No disapproving parents here, only friends and a good buzz. She'd brought the vodka. Legal or not—a jug of rum, a hand of poker, or a roll of dice—if a friend wanted amusement, she found the means.

Was that a string of dried mushrooms hung from Wilton's window crank? Animal skulls, pebbles and lichens lined the ledge. Books stacked on books. You could find anything from paints to snake skins in this room. Wilton, the shaman, with her brown hair and witch eyes.

"You smoke those 'shrooms, Wilton?"

"Gives you the quickstep," Gilman said. "But you don't smoke them."

C'mon, Gilman, can't you tell I'm ragging her? Sandy took another slug instead of answering. Lindsey frowned. Her cropped chestnut hair and level brows, more handsome than female, gave her a ruthless look.

"Crapola, Wilton," Lindsey said. "Why leave the States? We're good enough for anywhere. So why do you say go to the third world?"

"Because the first world is a man's world. They'll never hand it over to women no matter how smart we are."

A musical note behind the simple words, though her face looked pinched as if she'd never had enough to eat. Maybe so, since she grew up in a tropical world Sandy could only imagine.

"Same problem for blacks in America. Slightest dash of coffee and you're on the outside looking in, a permanent flat nose from pressing against the glass. Women are the niggers of the white world. They'll let you in far enough to guard the door against other women. But real power?"

Lindsey looked around the room as though she wanted to believe Wilton but didn't want to be the only one.
Didn't want to get caught out. Gilman stared into her mug, maybe dreaming of her business school boyfriend? Med school applications?

"They'll promise you heaven in America and trip you down to the basement," Wilton said. "In the States, I'm colored. My adoptive father says I'm the illegitimate daughter of a missionary and a Spanish Chinese Filipina. But in Nigeria, I'm white. They'll let me do anything."

Yeah, Sandy got it. What good was all this education if you couldn't play with the toys? Would any of them ever have more than this—smuggled booze from coffee mugs with friends who'd never turn you in?

She talked a lot tonight. Even pushing back against Lindsey.

"Brand new nations, bursting with demands. Torn by tribalism and confusion. Colonial times will soon be over—but in name alone. Imagine opportunities limited only by your talents…My world. My Nigeria. The greatest black African nation, and you can help. My father and I know people who owe us. They'll open doors, create jobs. You're alien to them, so the men don't need to control you as if you were their women. All you need are the gifts of your nature and education to write their world anew." Wilton caught her breath.