Read Night of the Black Bastards (An Action-Packed Thriller) Online

Night of the Black Bastards (An Action-Packed Thriller) 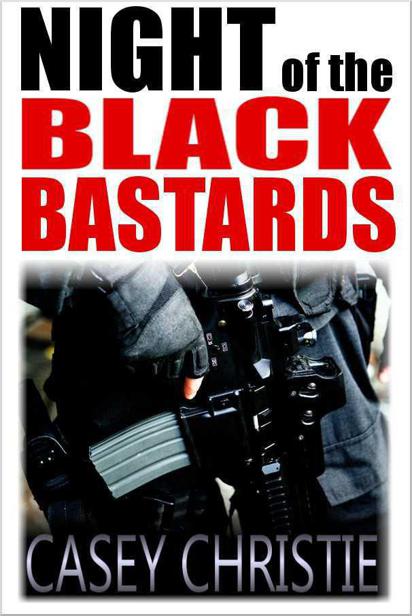 Night of the Black Bastards

This ebook is copyright material and must not be copied, reproduced, transferred, downloaded, distributed, leased, licenced or publicly performed or used in any way except as specifically permitted in writing by the publisher, as allowed under the terms and conditions under which it was purchased or as strictly permitted by applicable copyright law

Casey Christie has asserted his right under the Copyright, Designs and Patent Act 1988 to be identified as the author of this work

This novel is a work of fiction

In some cases true life figures appear but their actions and conversations are entirely fictitious. All other characters and descriptions of events are the products of the author’s imagination and any resemblance to actual persons is entirely coincidental

A trio of incorruptible cops--A veteran Sergeant, a former army commando, and his two cohorts, a Zulu giant and an expat Russian Spetsnaz operator--wage a ruthless war against the modern criminal gangs who ravage the city of Johannesburg with bank robberies, ritual murders, rape, torture and cash in transit hijackings. Reader discretion is advised
.
This tough police action thriller lifts the lid on South African life as three hard cops launch flat-out war against a Satanic crime-czar.
Night of the Black Bastards is a vivid crime thriller set in the dangerous streets of Johannesburg and the vastness of the Karoo Desert. It has the punch of reality because this dynamic new author draws upon his own experiences..
The book provides unique insights into police procedure and the savage reality of the high energy lifestyle of the grindingly poor and the obscenely wealthy inhabitants of the multiracial metropolis of Johannesburg.
The trio's principal adversary is a Zimbabwean colonel who has established a criminal empire based in the black township of Alexandra, where he is fearfully known as uSathane--the Zulu expression for The Devil. uSathane uses black magic and cannibalism--he drinks the blood of raped women--to keep him alive although he is riddled with Aids
.

Casey Christie is an international security consultant and the founder and managing director of Concept Tactical Worldwide. He is a former reserve member of the South African Police Force where he served in crime hot spots in Johannesburg, winning numerous police awards for outstanding service. He is SWAT certified, accredited in First Aid and government licensed in the United Kingdom as a bodyguard. Casey was trained in close protection and surveillance by former members of the British Army's elite Special Air Service (SAS).

He is the author of the non-fiction self-help title, Be Your Own Bodyguard in South Africa, and regularly contributes articles on security related matters to various newspapers and magazines globally.

Casey is based in London.

Dedicated to the men and women of the emergency services and armed forces everywhere.

For God. For Honour. For Brother. For Loyal Hound.

“Any November Whisky vehicle for a 32 Alpha come in for Control.” The voice of the Controller erupted on the police vehicle’s radio.

“Thank you November Whisky 50. We have reports of an armed robbery in progress at the Metropolitan Bank in Orange Grove on Louis Botha Avenue, are you wide or can you respond?”

“Yes we can respond Control we are about five Mikes away”.

“Ok, we have reports that 14 Bravo males, all in balaclavas and blue overalls, have just entered the bank carrying AKs and 9MMs – proceed with caution November Whisky 50” warned the radio Controller.

“Ya, thanks Control, will do” said Sergeant Night.

“Control this is Yankee Nine and I am with Yankee 25, we will provide the November Whisky boys with some back up and are also en route.”

“Copy that Yankee Nine. I was wondering when you were going to join the party” said the radio Controller.

“We have just booked on duty, Control, and wouldn’t want November Whisky getting all the glory. Besides we have been posted to their sector this morning and fully expect to break first for you at Alpha Complaints Control.”

“Ha-ha, thanks Yankee Nine but I am sure the November Whisky boys will have something to say about that!” said the Controller.

“Thank you Control. Listen up guys let’s all meet at the corner of Louis Botha and 2nd Avenue and proceed in tactical convoy to the bank from there?”

“Yankee Nine and Yankee 25 roger that!”

“Copy that guys – we will break in about four Mikes. Yankee Nine, I hope you ladies brought extra ammo with you today if you are posted to our area!” said Sergeant Night.

“Ya Night, we know your area is run by the Zimbabwean crime lords and you need all the help you can get, and don’t worry about us needing extra ammo, we could invade a small country with the amount of firepower we have in our vehicles today!” said Sergeant Snyman.

About three minutes later all of the responding police vehicles arrived at the designated rally point, got out of their vehicles and were being briefed by Sergeant Night.

“Ok guys I have confirmed with a source of mine inside the bank that this 32 alpha is positive and I think it’s a better idea, because of all the civilians in the bank, to let these guys finish the job inside first, exit the bank and get into their vehicles to leave and then we can blast them and their getaway cars to high hell!”

It is 0800 and Sergeant Night and his crew Constable Stanislov and his driver Constable Shaka have just booked on duty for the day shift at their police base, Norwood Station.

Norwood Station is the local South African Police Force representation for a five square kilometre region of some of South Africa’s most dangerous neighbourhoods. It’s not that the residents of these suburbs are criminals or dangerous themselves, rather the opposite; it is because these areas are affluent and occupied by people with a lot of wealth. The problem with this is that all these prosperous residents are surrounded by some of South Africa’s poorest inhabitants who had been abused by the old Apartheid regime and now seemingly forgotten by the new government.

Mix in the fact that South Africa’s borders are porous and large amounts of African refugees have flooded into the neighbouring squatter camps – the largest being Alexandra Township – where in particular, former and rumoured current, well-armed  Zimbabwean soldiers have set up a criminal empire -- robbing banks, hijacking vehicles, blowing up cash machines and committing cash-in-transit robberies. Enough mayhem to keep the police officers of Norwood Station very busy indeed.

Sergeant Michael Night, a white South African of British descent, is a good looking man of average height with striking features and raven black hair, powerful heavy set shoulders, a deep chest and formidable arms. He is known for his eyes though, striking, fearsome eyes that seem to burn straight into the soul of whoever he is talking to. His best friend and driver, Constable Daniel Shaka, is a black South African giant, standing over six foot six inches tall and weighing in at over 160 kilograms, from the African warrior tribe, the Zulus, and is simply known as “Zulu”. He is also the strongest human being Sergeant Night has ever known. It was he who gave Night a typical Zulu nickname – (izinyoka iso) snake eyes.

Constable Nickolai Stanislov is a powerful man with dark features and an endomorphic body type and a large bald head. A former Russian Spetznaz operator, he immigrated to South Africa ten years earlier and is one of the most respected combat shooters in the country. Together they make up the three man crew notorious throughout Norwood as the Black Bastards.

Constable Stanislov always thought this nickname was strange as Zulu was the only black man in their crew. But they got their nickname from the combat gear they wore, not their skin colour.

Sergeant Night is personal drinking buddies with General Amos Arosi. And General Arosi happens to be the South African Police Force’s Provincial Commander for Gauteng and Johannesburg. About three years previously General Arosi gave special permission to Sergeant Night and his crew to wear all black combat gear and uniform, unlike the majority of the South African Police Force who wear blue uniforms and combats. Permission that Sergeant Night won over a bet to see who could drink the most shots of tequila in an evening, or something. Night couldn’t quite remember.

The Giants and the Joneses by Julia Donaldson
Lord Wraybourne's Betrothed by Jo Beverley
Losing Him by Jennifer Foor
Anatomy of a Crossword by Nero Blanc
The Wagered Heart: Signet Regency Romance (InterMix) by Rhonda Woodward
Beyond the Poseidon Adventure by Paul Gallico
Stonebrook Cottage by Carla Neggers
The Devil's Scribe by Alma Katsu
Christmas at Claridge's by Karen Swan
Playing with Food by K.A. Merikan