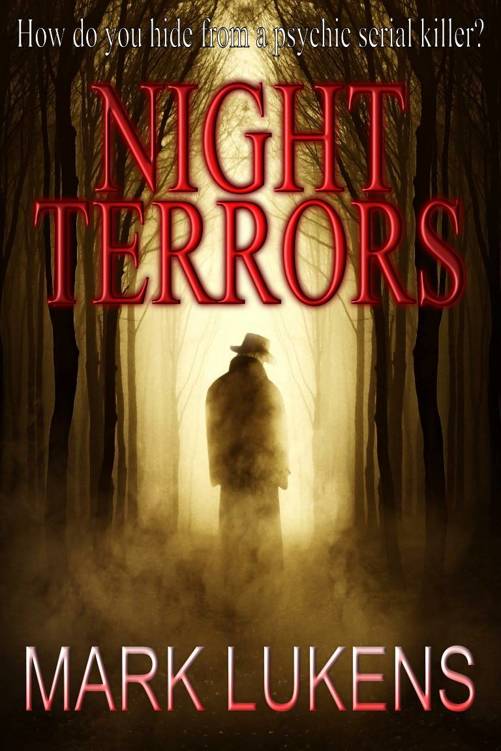 No part of this work may be reproduced without written permission by the author.

This book is a work of fiction. Names, characters, places, and incidents either are products of the author’s imagination or are used fictitiously. Any resemblance to actual events or locales or persons, living or dead (or in any other form), is entirely coincidental.

As always, this book is dedicated to my wife, my son, and my family.

Please check out these other books by the Author:

The Shadow Man waited in the darkness across the street, hidden in the brush and palmettos as he watched the house – it was a two-story home, constructed from block with a stucco finish which was painted a very light beige and trimmed in white. The house was two thousand one hundred and fifty square feet and was bought for two hundred and forty-five thousand dollars in 2005. There was a master bedroom downstairs and two other bedrooms upstairs. He had the layout of the home committed to memory – he had done all of the necessary research.

The front porch light was on and it cast a cozy, yellowish glow across the front porch and a small area of the front yard. A white BMW 328i sat in the driveway. The landscaping around the house was lush and tropical, and it would provide plenty of cover.

At the Shadow Man’s feet was a canvas duffel bag.

Inside the house, seventeen year old Jen watched her mother and father as they got ready to go out for the night. Her father shrugged into his suit coat and studied himself in the mirror that hung on the wall near the front door; he turned this way and that way, smoothing out the coat with his hands.

Jen smiled at her father. “You look fine, Dad.”

He returned her smile and then looked at his wife who rummaged through her purse like she was making a last-minute inventory check.

Jen’s father walked over to his daughter. “We’ll be back before midnight. You sure you’re going to be okay here by yourself?”

Jen’s mother, satisfied that everything was in order inside her purse, placed a reassuring hand on her daughter’s shoulder and answered for her. “She’ll be fine.”

“Yeah, Dad,” Jen added. “I’ll be okay. I’ve got a lot to do. I’ve got that report to finish for school.” Jen gently pushed her parents towards the front door. “Go on. Have a good time. Don’t worry about me.”

Jen’s father kissed her on the forehead. “Okay. Keep all the doors locked. Don’t open the door for anyone. And no boys over.”

Jen’s parents opened the door and walked out into the warm and humid night air.

“Bye!” Jen called out and waved to them as they walked to their BMW.

As Jen watched her parents get into their car, something tugged at her mind for just a moment; a quick and fleeting feeling, like something sharp and dangerous. And for just a moment she was sure that somebody was watching her from the darkness. She looked across the street at the brush and the forest of scraggly pine trees, but she couldn’t see anyone.

But he’s there,
her mind whispered.

And then as quickly as the feeling had come, it was gone. She pushed the momentary fear away; she was just having jitters about being home alone for the night – that was all.

She waved one more time at her mother and father as they drove away, and then she hurried back inside the house. She shut the door and locked it.

The Shadow Man watched Jen’s parents leave the house and get into their car. The car started. The headlights came on. The car eased out of the driveway and drove out onto the lonely neighborhood street, and then it sped away into the darkness.

There were only a few houses on this road – all of them on the other side of the street. Each house sat on a two acre lot and Jen’s house in particular was isolated from the other homes, separated from them by densely wooded lots on each side.

The Shadow Man smiled in the darkness. He made himself wait a few minutes longer; making sure that the parents weren’t going to double back because they’d forgotten something. He could stand to wait a few more moments; he’d been waiting a long time for this.

He knew that the girl inside the house had sensed his presence in the darkness. Their minds had “connected” for a brief moment. But it didn’t matter because he was going to be one step ahead of her at every moment.

The metal objects inside his duffel bag clinked together as he lifted it up and slung it over his shoulder. He hurried out of the trees and brush and then darted across the road like some kind of night animal.

Night animal, he liked the thought of that. Night predator – even better.

He raced across the dark lawn, careful to keep out of the splash of light from the front porch. He made it to the corner of the house and slipped in behind a group of Philodendrons. He crept around the corner to the back of the house.

Jen made sure the front door was locked one more time and then she walked over to the coffee table and picked up the remote control for the television; she left the TV on, but she turned the volume all the way down. She bounced over to the stereo system and turned it on. She found a pop station and cranked up the music.

She grabbed her laptop out of her book bag and plopped down on the couch. She flipped the laptop open, powered it up, and found the file for her school report. She had just started reading what she had written so far when she nearly jumped out of her skin.

Someone was banging on the sliding glass door!

Jen turned so quickly she almost knocked the laptop off of her lap. Her eyes were on the vertical blinds that covered the sliding glass door that led out to the pool deck in the backyard.

She stood up, her heart thudding in her chest, her mouth going dry, her mind beginning to buzz with panic.

Something evil is out there,
she thought.

Jen walked to the vertical blinds and stood in front of them. She was about to pull them aside, but she stopped. She flipped the light switch up and the yellowish light from outside shined around the edges of the blinds. She glanced back at her cell phone on the coffee table – maybe she should have it with her.

She turned back to the blinds, took a deep breath, and ripped them aside.

Right on the other side of the glass, only inches away from her, was a person dressed in dark clothing.

Jen breathed out a sigh of relief as she unlocked the sliding glass door and pushed it open.

Kevin, eighteen years old with an athletic body and a lopsided smile, entered the home. He grinned at her. “Who’d you think I was, the Boogeyman?”

He tried to kiss Jen, but she pushed him away and closed the sliding glass door.

“What the hell?” she said. “You didn’t have to pound on the door like that.”

Kevin smiled and then gave her a mock frown. “If you don’t want me here, I can leave.”

She smiled and kissed him. “No, I want you to stay.” And then she pushed him away again. “But you scared the hell out of me.”

Kevin smiled and headed for the kitchen. He opened the refrigerator and rummaged around. “Your dad got any beers hidden in here?”

Jen didn’t answer; she went back to the couch and her laptop.

“Here we go!” Kevin shouted as he found four bottles of beer behind a gallon of milk. He grabbed one of the beers, opened it and drank a third of it down. He sauntered back into the living room with the beer in his hand.

Jen stared at him. “What am I supposed to tell my dad when he sees that his beers are gone?”

“He’ll be drinking enough tonight. He’ll probably think he drank them. You could tell him that he blacked out.”

Kevin plopped down on the couch right beside Jen as she pretended to read her report on the laptop. She scooted away from him.

He scooted closer to her and took another sip of his beer. He smiled as he watched her. “I’m sorry I scared you.”

Kevin scooted closer to Jen as she set her laptop on the coffee table by her phone. They kissed; Kevin forced his tongue into her mouth right away.

“You know you like it,” Kevin said, still smiling at her, but there was a hungry look in his eyes. He stood up and set his beer down next to her laptop on the coffee table. Then he walked towards the door at the other end of the living room and looked back at her. “Come on, let’s go to the bedroom.”

“I know,” Kevin said and smirked, and then he entered the dark bedroom, leaving the door open for her, inviting her in.

Jen hesitated. She really wanted to make out with Kevin – she
always
wanted to do that – but right now that feeling of dread still tugged at her. And for the second time that night she pushed the tingling feeling of fear away. She felt a little safer now that Kevin was here with her. She got up and rushed to the bedroom.

She entered the bedroom and closed the door. The room was totally dark; the only light came from the crack underneath the door.

“Where are you?” Jen whispered as she walked towards the bed, letting her eyes adjust to the darkness.

No answer from Kevin.

“Down here on the bed,” Kevin whispered.

Jen lay down on the bed and Kevin slid closer to her. It was quieter in the bedroom, but Jen could still hear the music thumping from the living room.

Kevin reached for her in the darkness, his hands groping at her body. He kissed her; a longer, more passionate kiss this time. And she started to forget about her fear for a moment; she wanted to let herself surrender to Kevin. He moved his hand down her arm to the bottom of her shirt, his fingers wiggled underneath her shirt, slowly working their way up …

Kevin breathed out an annoyed sigh.

“Come on, we’ve been going out for six months now.”

“It never seems like the right time for you.”

Jen sat up and hugged her arms like she was cold. She glanced around the dark bedroom. She couldn’t shake the nervous feeling. No, nervous wasn’t the right word. She was
afraid
. That presence she’d felt earlier, that evil and that darkness, it was back now and much stronger than before. A buzzing panic was building up inside of her. Something very bad was outside her house; she knew that it didn’t make any sense, she knew that it wasn’t reasonable – but she knew it was true.

She looked back at Kevin. “Maybe we should go out somewhere.”

“Go somewhere? Why? We’ve got the house to ourselves.”

“I don’t know. I just want to go somewhere.”