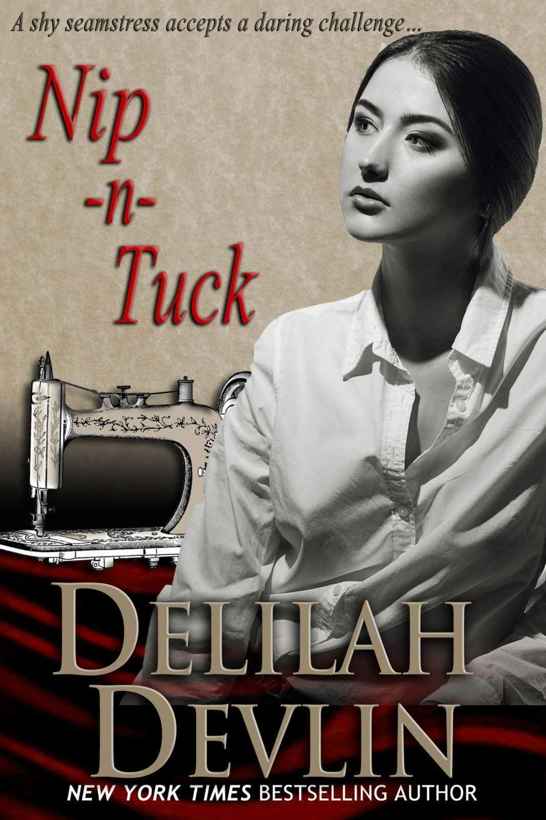 Note: This 5100-word short story was previously published in
Strokes, Vol. 1
, but has been revised and expanded. It may be short in length, but it’s not short in passion!

For more short stories by Delilah Devlin, check out:

Dreaming by the Sea

Night at the Wax Museum

Tailgating at the Cedar Inn

If you love vampires, werewolves, and things that go bump in the night, check out her NIGHT FALL series:

Silent is the Knight

To those of you who’ve read me before—hello, friends! To new readers, welcome to my world!

As you’ll discover, I tend to bounce around in different genres, from contemporary to historical to paranormal to sci-fi—all are very sexy,
so be warned
. I also write in many lengths from short story to full-length novel. If you can’t tell, I love to write. And when a story is fast, it’s short. If my characters need more pages, well, you get the picture. I’m a slave to my muses (I have three—or so three different psychics have told me!).

I love hearing from readers, and have a very active blog and Facebook friend page. I run contests, talk about my favorite TV shows, what I collect, what drives me crazy. I ramble a bit. I’m doing it right now. But if you’d like to learn more about me and what I’m doing or writing about, be sure to check out the “About Delilah Devlin” page after the story.

And if you enjoy
this
story, please consider leaving a review on your favorite retail site or simply tell a friend. Readers do influence other readers. We have to trust someone to tell us whether we’ll have fun when we open a new story!

Visit
www.DelilahDevlin.com
for more titles and release dates and subscribe to Delilah’s newsletter at
newsletter
.

G
abby Brown heard
the distant ding of the bell above the shop door and checked her watch. Noon.
At last.
She’d been nervous all morning and had stuck her fingers with pins until the pads tingled. She’d ushered out the last customer fifteen minutes ago, and then hurried to the restroom to run her fingers through her curly hair and gloss her lips. She wore her “uniform”—a cardigan over a plain, button-down blouse, a dark, knee-length skirt, and comfortable shoes.

She glanced at her reflection, pleased with her plain appearance.

I can do this
, she told herself. It wasn’t as though they were
complete
strangers. Perhaps she didn’t know what he looked like, but he’d learned her secrets, her passions while sharing his own. He’d slowly stoked a fire inside her, promising her a discreet thrill. The first of many.

For a woman who had somehow let her youth slip by, the chance to live out a few of her favorite fantasies was too enticing to ignore. He’d promised an elicit pleasure. A test run, of sorts. To save embarrassment or hurt feelings, they’d also agreed to hold off discussing future engagements until they could meet again that evening online. And because she’d admitted she was shy about revealing her body this first time, today she would remain fully clothed.

Leaving the bathroom, she pulled back the curtain separating the store from her fitting room. Her glance landed on the long lean body faced away, looking at a pair of ugly plaid golf trousers. When his hand reached for the hanger, she smiled.

Forcing away her smile, she entered the room and strode quietly up behind him. When she stood beside his shoulder, she enjoyed the fact she had to tilt back her head when she turned to meet his gaze. He was bigger than she’d thought he’d be. “Would you like to try them on?”

The face that turned her way was more handsome than he’d led her to believe. A strong angular chin, a blunt nose. Dark thick eyebrows framed a pair of curious brown eyes.

A frown dug a line between those dark eyebrows then his gaze flicked to hers again. “The pants are ugly as hell,” he murmured.

“I’ll help you with them, if you like. You could try them on for size,” she said, suddenly breathless, flirting with her eyes and lips. She bit her bottom lip, and then released it with a little laugh.

His slow, answering smile melted her. It was crooked and dug a dimple into one cheek. He was younger than she’d initially thought, looking at him.

Eager now, she grabbed the hanger, clamped her hand around his fingers, and tugged him along. “Come with me.”

And he did, much to her relief. There was no sign he was disappointed with her appearance. No reluctance in the drag of his feet. Just a quirk of his eyebrows and a quick glance around the shop.

“Don’t worry.” She glanced at the bell above the door. “We’ll know if anyone comes in. I’ll be quick.”

He cleared his throat but ducked through the curtain to follow her inside her little room.

She knew what he saw. A dingy little airless room. A sewing machine on a dented work table. A rack crammed full of clothing she’d already mended, shortened, let out… She was a seamstress—not a sexy job—at least, not until he’d convinced her otherwise.

“This is where you work?” he asked, his voice sounding slightly bemused.

She lifted a shoulder. She’d warned him the shop wasn’t much. “I make a living.”

“Exactly. But we don’t have a lot of time. Marlon will be back from lunch in half an hour,” she said, mentioning the shop owner who’d employed her for over ten years. She lifted her chin toward the pants still clutched in his hands. “Try them on. We’ll discuss the fitting.”

Both eyebrows shot up this time. “Right here?”

The playacting was fun but now that she’d seen him, she wanted action
. “If you’re shy, you can use the restroom, but there’s no need. Not with me.”

He gave a slight snort, shook his head, but set the pants on her work table. He took off his sports coat, loosened his tie, and then toed off his well-shined black shoes. When his hands paused at his belt buckle, he rested his gaze on her for a long moment.

She decided to make this a little easier. She strode toward him, shooed away his hands, and holding his gaze, she unbuttoned his waistband and slid down the zipper.

A muscle straddling his jaw flexed. “This a full-service establishment?”

Her grin dug a dimple into her cheek. She liked his sly wit. “I live to serve,” she said, giving him a wink.

He sounded surprised. So she believed his words. “Thanks for saying that. I hardly ever go to the bother of makeup, but I wanted to look special today,” she admitted, feeling heat rise along her neck.

“Yes.” Grabbing his waistband, she dragged his pants off his hips. Her gaze dropped to the erection tenting his boxers. “Very special,” she whispered.

His trousers fell around his ankles, and she knelt to hold them while he stepped out. She liked his legs, liked the dark hair cloaking his olive skin, the muscle tensing in his thighs as she stood, her hands grazing him lightly as she came up.

She reached for the bright green golf pants and dangled them off a finger.

Again, his eyebrows shot up.

“Like we agreed,” she said breathlessly. “Put them on.”

Oh, nice touch
. She shook her head at his reluctance, raising her finger like a schoolteacher to scold him. “Let me work…first.”

He blew out a slow breath, and then pulled on the pants, one leg at a time, hopping a bit when he was unbalanced.

Her gaze ate him up, watched the bounce of his thickening cock. Red splotches bloomed on his cheeks, and she heard his soft curse. She suppressed a grin. He was being a good sport about this. She’d been the one to design the scenario. Something she’d always fantasized about doing to a stranger, but had never had the courage to try. Not until “TallDarkBanker” teased her in a private chat room into revealing her innermost desires.

The ugly plaid slid up his thighs. He closed the waist then set his hands on his hips and glared down his legs in disgust. “Really? Who buys these?”

She laughed, reached into her pocket, withdrew the remote and extended her hand.

He blinked then gave her a narrowed glance. But he took it, holding it in his palm. After a moment, he flicked the
ON
button with his thumb.

As was her sudden lurch. Wild vibrations bounced along her channel walls. She rested a hand on her belly. “Try for a gentler setting,” she said, her breaths gusting until he tapped the button twice more.

His gaze slid down her body.

Her knees were clamped tight, and she eased her stance as the vibrations settled into a softer hum. Taking a deep breath, she picked up her tape measure, slid her pincushion over her wrist, and knelt at his feet. Keeping her head down, she cleared her throat. “To what side do you dress, sir?”

Gabby raised her head and stared steadily at his rounded crotch.

She pinched the fabric between her fingers, tugging it taut to reveal the shape of his thick cock as it stretched down his thigh. She plucked a pin from her pincushion and folded the fabric, creating a pouch that emphasized his cock. She stuck a pin into the fold to hold it.

His thigh twitched. “Careful with those.”

“Anyone actually wear them this way?” he asked, his voice rising.

A smile tugged her lips. “I’m just getting your measure.”

“Better make sure you leave more room then,” he growled softly.

A grin tugged at her mouth. “You’re right, sir. I should see how much fabric I should leave…for comfort.” She let go of the fabric, removed the pin at his thigh, and efficiently unbuttoned and unzipped his pants. Then standing close to his chest, pressing against him to increase the pressure on her clamped nipples, she slid her palms inside the back of his pants and beneath the waist of his boxers, and smoothed them both down his buttocks.

Beneath her fingers, his skin was taut and muscled. When she’d pulled all the material down his thighs, she glanced up to gauge his reaction.

His skin was stretched across sharp-boned cheeks. His gaze was just as hard-edged and focused on her mouth.

Just as they’d agreed, she leaned toward his cock, letting her eyelids drift down halfway, and breathed in his scent as she rubbed her cheek against his satiny shaft.

“Fuck me,” he muttered softly.