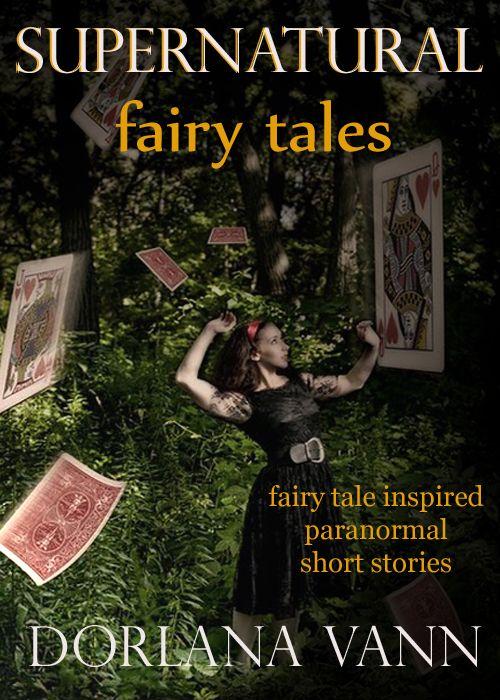 If You Feed a Wolf

If it Weren’t for Bad Luck

Quiet on the Nightingale

What Are Supernatural Fairy Tales?

Since Jackson couldn’t channel his frustration onto the blank page, he used his fist to pound it into the desk. “Ahhh,” he cried, swooshing his fountain pen and several loose pieces of writing-paper to the floor.

His caged birds squawked with excitement from the sudden movement in the quiet room. Feathers flew. Jackson stood up, his breaths labored and lonely. “I’m sorry ladies. I didn’t mean to frighten you.”

He draped a stack of dark sheets over his arm. “Are you ready for your beauty sleep, my Echo?” He covered her and moved on to Valley, giving her several sweet kisses. Continuing his ritual, he covered all twenty birds leaving Isis, his two-foot Scarlet Macaw, as his last goodnight.  She blinked her yellow eyes at him.

“Sleep well, Love,” he said and then ran his fingers through his slick hair, noticing how dark and stale the room had become.

He opened the window, lit a lantern, and picked up the paper and his pen, setting them back on his desk. He thought about writing another letter but knew they were only stall tactics.  “I’m a novel writer,” he reassured himself. “Now write something novel!”

He felt anxious. There was nothing left for him to do. He had moved to one of the most crime-ridden areas of London to conduct his research. When observations had stopped inspiring his writing, he had taken it to the next level. The first hand accounts had given him dozens of pages: a feel for the weapon in his hands; the reaction on the faces of the women when they knew they were going to die; and the color and temperature of the blood. After each attack, he had sped home and written feverishly, until the words stopped, died on the page—

He conducted more studies, pushing himself to the limits of his own capacities. “Why am I still blank?” he said in a sob. “Why?”

Isis began to squawk in her cage, beneath her cover.

“Shush,” he said off-handedly. “I’m having a difficult enough time as it is.”

Jackson turned his head slowly toward the covered cage. He listened. Sure she could talk, “Pretty lady.” “I love you.” But never… “Let me out.”

She said it again.

Jackson scooted his chair back and stood abruptly. “Was that you, Isis? Did you learn something new?”

“Open the cage, Jackson. Let me out.”

Jackson shook his head, trying to clear the confusion. Obviously, because he was exhausted and tense, he was now hearing things. That’s all. However, he eased toward the cage. One step—stop. One step—stop… Swiftly, without thinking, he uncovered Isis.

She sat on her perch, head down, asleep.

“Isis?” he whispered. “Was that you?” He looked around the room when he heard rustling coming from the other cages. All the sheets were moving. Jackson heart thumped.

But then he remembered he had opened the window.  After taking the six steps to the window and ignoring the lack of breeze, he closed it. He turned around, backed against the window, hands stretched out—palms wide, like he was keeping the walls from closing in on him, because all the cages were uncovered.

It seemed like morning: birds bounced, stretched out their wings, walked, and whistled, however, much more so. The cages were actually open, and the birds began to explore. Isis, eyes open now and sitting on her perch in her home, stared at Jackson.

Jackson peeled himself away from the window and cautiously moved toward her. “Love?”

He felt terrifyingly wonderful. Sweat gathered on his brow and above his lips. “Isis? Do you understand me?”

Jackson tried to steady his blinking; he shut his eyes hard and then reopened them. “Why now? Why not before? I have told you my most intimate secrets and feelings and you never spoke an intelligent word.”

“The time was not right. I am here when you need me most. Let me be your inspiration.”

“Oh, Isis! How I do so need someone to talk to. I have so many troubles. Thank you for sharing your wisdom with me now.” He put his arm in her cage, enduring the sharp claws he usually protectively wrapped his arm against. He stroked her red feathers. “My beautiful, Isis, what words do you have for me? Do you know what I must do to finish my story?”

“You have watched, but you have never felt. In order to achieve realism and depth, you will need to experience the pain for yourself.”

“Yes, yes… I see. I see what you mean. But how? How can I achieve this insight?”

“I will be near whilst you sink the edge of your knife into your skin. Not too deep my dear, just enough to feel a twinge.”

“Marvel upon marvel, you are my muse!” He set Isis on the back of his chair and ran to his bedside table and pulled out his knife. Its long thick blade still stained from his latest research project. “Where? Where shall I feel it?” he asked, sitting on the edge of his bed.

The coldness of the blade against his neck caused his heart to quicken with excitement. He stared at Isis as she moved her head to and fro with tiny jerks. “Just this fills my head with ideas, with words…” He sucked in his breath and pressed a little harder, the sting bringing quiet tears to his eyes. “How absolutely stimulating.”

He heard them before he saw them, but only by a second. All of his beauties came towards him, Isis in the mix, their feathers, and beaks, and claws causing his hand to yank deeply inward and then slide to the side. Falling backward, Jackson still imagined how his ghastly and perfect pain would translate onto paper.

As the feathers settled and the squawks calmed to a low murmur, Jackson’s last breath was accompanied by his last vision: five faint ghostly figures dancing above him. He heard the words, “Jack the Ripper, our story ends in revenge,” as his eyes closed.

At first Cynthia was afraid to look out the window. She was afraid she would see the ghostly figure out by the horses again, stirring them up, making them run and complain. But she was expecting someone; she had to look.

The speck of hope that the person riding up the path was her husband immediately died away. The man hunched over and rode at a steady pace, like he had all the time in the world. The sudden ominous sorrow she felt was overwhelming.

Cynthia moved away from the window and began removing the supper dishes from the table. As soon as she had set them down, a loud knocking erupted. She smoothed her dress and touched her hair, wishing she had put it up instead of the bowls, and opened the door.

The stranger’s head was down, showing the top of his brown hat.  He was tall and broad shouldered and dirty.  Pistols hung on both sides of his hips. When he raised his head, the smell of whiskey came with each noisy breath. He squinted into the light. “Ma’am, I’m looking for Tommy Two Shot.”

The man frowned and then spit out the side of his mouth, saliva hitting the porch. “Is that so? Well then, when ya expecting him?”

The only reason she didn’t reconsider her decision to ask for his help was because she was more afraid of the ghost than she was of the stranger. Besides, no one, who knew Tommy, would dare harm his wife. “Mr. Stockton?
I’m
Mrs
. Thomas Garrison. I’m the one who sent for you. Please, come in.”

He wiped his feet, removed his hat and walked into the house but didn’t stop very far past the door. He cautiously examined the room, looking to the fireplace, table, and chairs.

“Daddy! Daddy!” Mary and Annie ran into the room but stopped when they saw the stranger.

A flush of embarrassment raced up Cynthia’s face. “No girls. It’s a friend of your Father’s.”

“We don’t use that name in our home,” Cynthia said quickly.

He glanced at the girls and nodded. “My mistake ma’am. I mean, where is Mr. Garrison?”

“Girls… go on back to bed now. Annie, help your sister.”

The girls did as they were told and soon Cynthia was alone with the stranger. “Please have a seat.”

When the man sat down, his guns clanked against the chair.

“I’m going to get straight to the point, Mr. Stockton.” She placed a kettle into the fire, moving a stocking that hung from the mantle out of her way. “I have a problem. You see, after my husband left on a business trip…”

“I know.” She turned around and peered at the filthy man who sat across from her. She considered her words carefully, but at the last minute decided it wasn’t the time to beat around the bush. “I don’t need a killer. My husband told me what you do. I need someone who can get rid of a ghost.”

“He told you about that, huh?”

“He told me you had a special ability of some kind.”

“Are you sure it’s a ghost and not some coyote or raccoon? That’s happened before.”

“I’ve seen it out by the horses. It ain’t no coyote. It’s shaped like a man, but I can see right through it. It rattles the horses, scares them silly, and just as it turns its head to look at me… I turn away and hide. I’m afraid if it sees me it’ll come inside. I don’t want it coming inside, Mr. Stockton.” The kettle whistled, and she jumped.

“I’m not sure what your husband told you, ma’am, but I can’t get rid of the devil if that’s what you got. I’ve had a lot of folks wanting me to get rid of the devil.” He laughed and shook his head. “You see, I’m kind of what you call an interpreter. All’s I can do is listen.”

She poured him a cup of coffee and carried it to him, the coffee spilling a little from her shaky hands.

“You have a mighty fine home, Mrs. Garrison.” He took a sip of his coffee. “Real clean.”

The compliment made her feel uncomfortable. The way they lived, always on the move, they didn’t have things like other people, so there was nothing to make things untidy. Sometimes they lived in hotels in town, but it was worse when they had to stay with “friends.” She was grateful that this time they had found an old abandoned house out on the prairie—at least that was what her husband had told her. She didn’t question why it had furniture and a nice fence.

The Boy I Love by Marion Husband
The Fast and the Furriest by Andy Behrens
In Need of a Good Wife by Kelly O'Connor McNees
Becoming Mona Lisa by Holden Robinson
Warlord of Kor by Terry Carr
Fireflies by Ben Byrne
Elly & Kent - The Complete Story: Includes Books 1-3 by Marie Cole
The Wrong Path_Smashwords by du Paris, Vivian Marie Aubin
Salsa Heat by Rae Winters
Dusk (Dusk 1) by J.S. Wayne