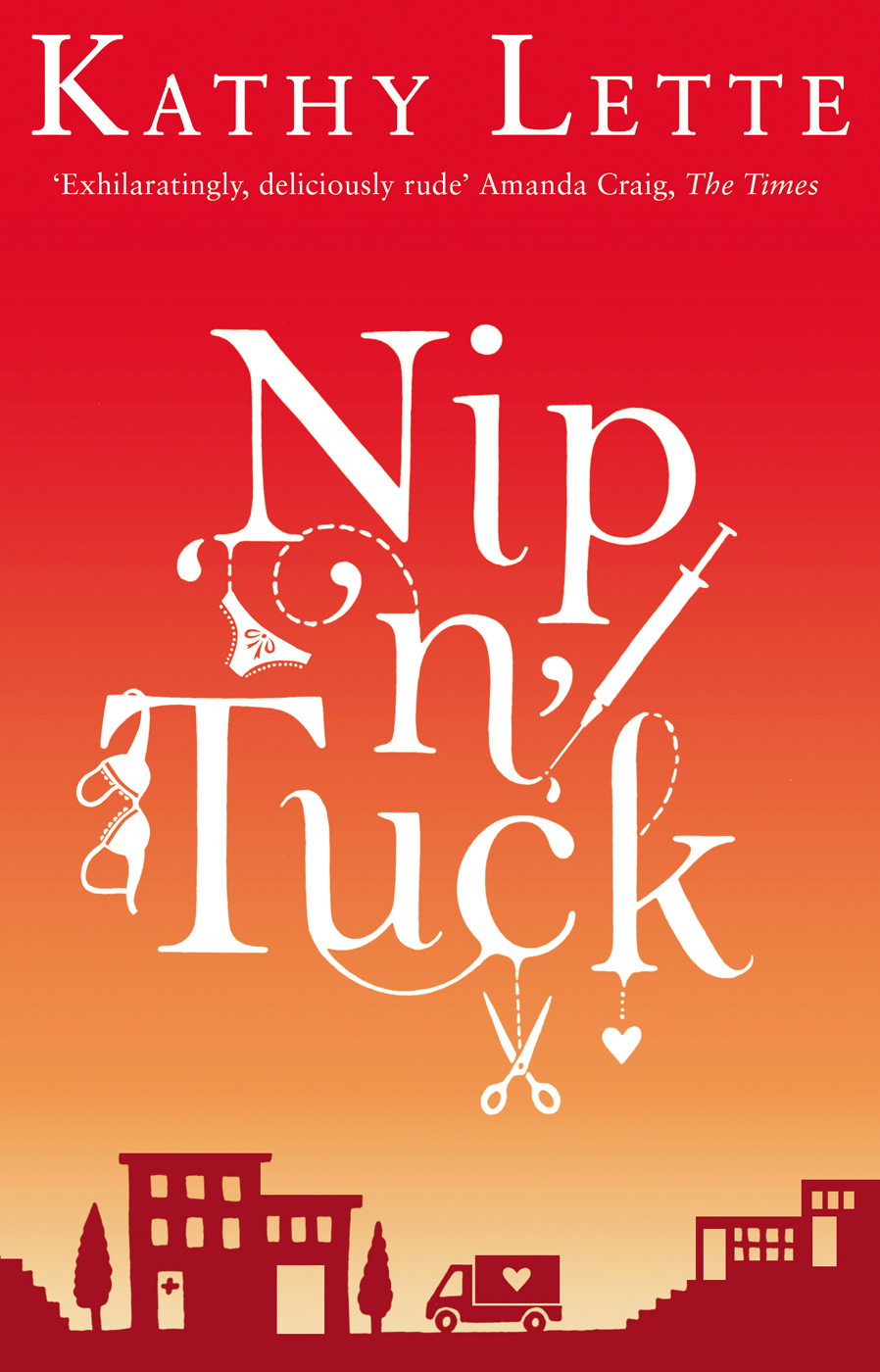 Journalist Lizzie McPhee has always thought of beauty as a case of mind over matter – if you don’t mind, it doesn’t matter.

But all that changes when she begins the countdown towards the big 4-0. Suddenly, she’s comparing her butt buoyancy to that of women on billboards and worrying about wrinkles.

But the pitter-pitter-pat of tiny crow’s feet is soon the least of Lizzie’s worries. In the space of twenty-four hours, she is replaced as news anchor by a young himbo who keeps fit by doing step aerobics off his own ego. And then she catches her surgeon husband Hugo cheating with catty soap actress Britney Amore – a woman whose bra cup size is bigger than her IQ.

Suddenly, Lizzie is in free fall. Can she turn back the clock, and win back her life? Or will she discover there’s a better way to grow older gracefully?

2. Are you Sure You Need Only
One
Cake For All Those Candles?

3. Medics! We Have Incoming!

4. Too Old to Lambada, Too Young To Die

7. When You Wish Upon A Michelin Star

8. Many a True Word Is Spoken Ingest

9. It
Is
as Bad as It Gets and They
Are
Out to Get You

12. Having Your Cake and Not Eating It Too

14. Is That A Wallet in Your Pocket or Are You Just Pleased to See Me?

17. I Can’t Believe It’s Not Marriage! It Smells, Tastes, Looks and Spreads Like Marriage, But It Just
Isn’t

19. A Stitch in Time – Now That Really
Would
Have Confused Einstein

20. All Stressed Out With No One To Kill

24. Ladies and Gentlemen, Due to Illness, Tonight the Part of Lizzie McPhee Will Be Played by Pamela Anderson … Now Sit Back and Enjoy the Show

27. I’m So Miserable Without You, It’s Almost Like You’re Here

28. Relying on the Kindness of Passing Serial Killers

31. Ugliness Is In The Eye of the Beholder: Get It Out With Optrex

This book is dedicated to my children, Georgina and Julius, without whom I would look years younger.

‘God has given you one face and you make yourselves another.’

First there’s the me who is often found flirting with lettuce fronds on my front tooth. The me who doesn’t use hair conditioner because it takes too long. The me who, only this morning, got my antihistamine and spermicide sprays confused. Now I have a vagina that can breathe more freely and nostrils I can safely have sex in for at least six hours.

This is the me whose idea of ‘working out’ is a good, energetic lie down. (There is growing medical evidence, you know, that jogging can make you hot and sweaty.) The me who understands that if shop mannequins were real women, they’d be too thin to menstruate. (I mean,
hello
? There are three billion women in the world who
don’t
look like super-models. And only six who
do
.) Hey, if you’re feeling fat, just make sure you always stand next to a heavily pregnant woman – take one with you everywhere. That’s my advice. And wear tights that control your excesses the way the Taliban controls Afghanistan.

It’s the me who only shaves my legs to the hemline in summer. In winter I’m too lazy to shave at
all
. I wear thick tights and hope nobody notices the spikes porcupining through my Lycra. As for holes? I simply paint my leg in black felt pen. Even when I
do
shear, I always miss a bit and end up sporting a hirsute median strip down the back of one leg. And you could use a curling wand on those pubes. I like my bikini line, goddamn it. It’s like having a little pet in my pants. Which is why I favour, at the beach, the Channel-crossing-neck-to-knee
circa
1922 look. Nothing better than a sturdy, orthopaedic bathing suit.

My other sartorial preference is trackie daks. My motto is – if it fits,
don’t wear it
. I like to wear clothes baggy enough to cover an aircraft carrier; teamed with voluminous knickers – yes, my panty-line is always visible. I have a positive allergy to G-strings. Hey, if I needed a curette, I’d bloody well go to a hospital and get one.

The same me who’s always thought of beauty as a case of mind over matter – if you don’t mind, it don’t matter. The me who allows all that ageing
Angst
to fly right under my anxiety radar. The me who doesn’t think age is relevant, unless you’re like, you know, a Stilton. You never see Cheddar cheeses undergoing Dermagen soft-tissue augmentation, now, do you?

This me mouths off tipsily at dinner parties that make-up generates more money than armaments. ‘And when you think about it, that’s exactly what all those beautification products are, really – ammunition in the sex war.’ (My girlfriends are usually making ‘Who lit the fuse on
your
tampon?’ taunts by now.) ‘Most cosmetic manufacturers are
French
. What does that tell you? That they’re full of bullshit and LOUD about it.
That’s
what.’ (You’re starting to be amazed that I
have
any friends, right?)

But honestly. ‘The
Science
of Beauty’ … puh-lease. If these so-called beauty scientists are so bloody brilliant, why aren’t they off fixing the hole in the goddamn ozone layer? Given the choice between an episiotomy and listening to a beauty therapist, I’d say, ‘Get the scalpel.’ It’s nothing but protein-enriched witchcraft. The only reason a moisturiser is called a ‘miracle cream’ is because it’s such a bloody miracle that anyone would fork out fifty frigging quid for it.

That’s the me who thinks ‘free radical’ refers to Nelson Mandela. The me who hears myself described as a ‘lady’ – and reels around looking for the Duchess of Kent. Despite the fact that I’m a presenter for the BBC’s
The World News Today
, I’m obviously just impersonating an Adult. Actually, I’m immaturing with age. At work, after I’ve boiled down the day’s events into digestible yet nourishing news bites, I waste entire afternoons thinking up profoundly puerile nicknames for my superiors. After I’ve reported on the latest volcanic eruption or political corruption, I am often to be found alone in my office, miming along to Destiny’s Child singles using my deodorant as a microphone, or hanging out with the make-up girls, making prank phone calls to the Prime Minister’s office and Xeroxing our labial regions.

That’s the me I like – the one who’s been known to drink huge amounts of vodka and wake up stark naked in an unfamiliar nation with nipple jewellery. The me who only leaves a cocktail party when abducted. Or at knifepoint. The low-maintenance, high-value, worldly me who can say in sixteen languages, ‘Hey, buddy, I’ve got an extremely contagious genital disease I’d be only too happy to give you.’

But
then
there’s that
Other
Me.

That
Other Me
recently rear-ended a police car because I was scrutinizing my face in the rear-view mirror for signs of photo-ageing. This
Other Me
’s body is coated in creams thick enough to trap small domestic creatures – cats, squirrels, passing pet mice, they’re all to be found stranded and struggling on my nether regions. Honestly, of late I’ve been dousing myself in a potion quotient to rival the petrochemical output of Iraq. My husband, Hugo Frazer MD, could develop Gulf War Syndrome from just one kiss. Actually, I’m terrified I’ll start some toxic chain reaction by accidentally using a Revlon
décolletage
softener with a Clarins abdominal cellulite gel and just EXPLODE! There’ll be bits of me all over the bloody room. Well, at least
those
beauty products will live up to their claims to ‘stop ageing in its tracks.’

This
Other Me
feels trapped in a body that is no longer mine … which is why I’m wheezing and panting my way to an early death on the hamster wheel of self-improvement … And why I’ve given up the
New York Review of Books
in favour of magazine articles entitled ‘Ten Tips For Toning Thunder Thighs’.

This
Other Me
is backstroking up and down the pool of Narcissus, at torpedo speed … This
Other Me
feels so ugly that I worry if people so much as glance at me they’ll need a cornea transplant, pronto.

What the hell is wrong with this woman? I hear you ask. If her brain were a toy the box would read ‘Batteries Not Included’; produced by a company called Morons R Us. I mean, why the schizophrenia?

Why? Because I’m thirty-nine.

At thirty-nine, you go to bed one night as usual, your normal, scuzzy old self, in your husband’s faded Arsenal shirt, with a smudge of toothpaste on your chin and a bit of dental floss still wedged between your fangs, encased in your favourite pair of moth-eaten cottontails, the ones with the hole, the stain and the erratic elastic (just in case you get your period) – only to wake up a Spandex-wearing gym junkie with pores in need of constant rehydration, a personal trainer, a Jungian analyst, a car shaped like a sex aid, a nail technician, a toy-boy fixation and having whole conversations about seaweed facials and tantric clitoral lavage.

Beautification techniques to which you’ve never given a moment’s thought suddenly take up more of your brain space than third-world debt. If I had to choose between starting a new diet and eradicating world hunger, I’d have to ask, ‘Um … Slimfast or Jenny Craig?’

El Niño and the ensuing environmental destruction are less worrying than the discovery of a new wrinkle.
Wrinkle?
Who am I kidding? I’ve got enough crows’ feet to start a bird sanctuary. Actually, they’re not crows’ feet: they’re bloody great ostrich prints … Who let the pterodactyls loose? Apparently they’ve been stomping all over my face and I didn’t damn well notice.

It’s as if UFO rays from some outer galaxy have been beamed into your brain making you agonize over, of all things, inner thigh elasticity. Just as quickly all the money in your purse evaporates, teleporting itself into the bank vaults of cosmetic companies. And for what? Some ‘wonder cream’ that they can’t tell you exactly how they make – but, put it this way, two hundred ferrets went
into
the laboratory, and only two hobbled out, and
those
had grown a couple of extra heads and undergone some mysterious sex change.

But who cares? You bloody well buy it anyway. You seem to have developed a chronic inability to say ‘No’ to Harrods beauty assistants. Puréed pig erections? Yes, please. Ground sheep embryos in a handy, handbag-size dispenser? Hell, yes. Good God, if beauty experts told me to eat my own sanitary towel for an invigorated complexion, I’d damn well do it.

All of a sudden, sunlight, late nights, alcohol, coffee and everything else that makes life worth living are not DC – Dermatologically Correct. With no prior warning, I find myself unexpectedly wanting to put a cosmetic surgeon’s kids through private school. Out of the blue, I’m comparing my butt buoyancy to women on ten-foot billboards and making lists of all the females I know who are younger and more slender of thigh than I.

At least I’m not the only one making such a moron of herself. It seems to me
all
women over thirty-nine – from the double agent who smashed terrorist cabals to the aviatrix who crash-landed on a Himalayan peak – find themselves, contrary to all expectations, transmogrified into demented Barbie wannabes, desperate for an elixir to combat the terrible, incurable disease afflicting females – age. It’s not racial but facial prejudice – a discrimination only suffered by women. (I mean, Woody Allen still gets laid, right?) For females, word-play is foreplay. But for blokes? Well, if manners maketh man, make-up maketh woman. And we don’t need a phalanx of behavioural scientists to explain why men judge women by their looks. Because they
see
better than they
think
.