Read No Place For a Man Online

No Place For a Man 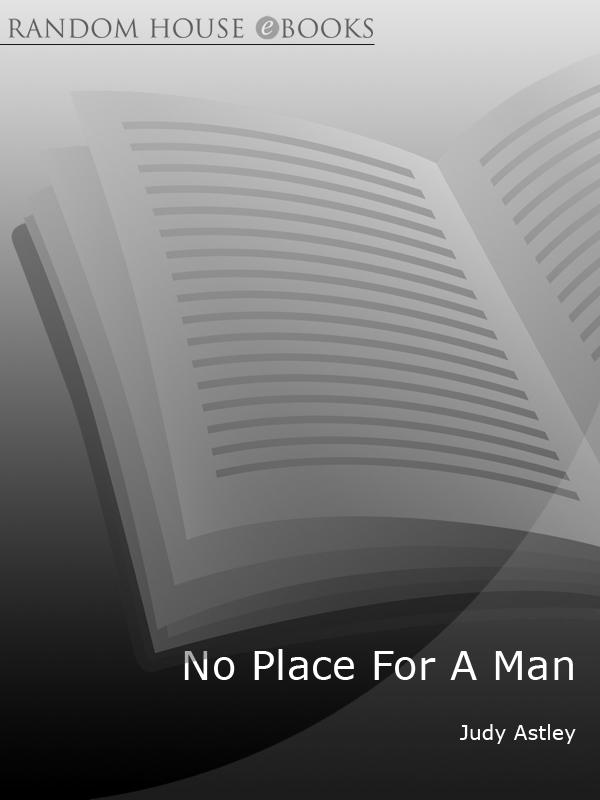 NO PLACE
FOR A MAN

Lyrics from ‘I’m Free’ by the Who, quoted with permission of Pete Townshend and Fabulous Music Ltd.

The right of Judy Astley to be identified as the author of this work has been asserted in accordance with sections 77 and 78 of the Copyright, Designs and Patents Act 1988.

Condition of Sale
This book is sold subject to the condition that it shall not, by way of trade or otherwise, be lent, re-sold, hired out or otherwise circulated in any form of binding or cover other than that in which it is published and without a similar condition including this condition being imposed on the subsequent purchaser.

David Snelling, like it or not this one’s for you.

Judy Astley was frequently told off for daydreaming at her drearily traditional school but has found it to be the ideal training for becoming a writer. There were several false starts to her career: secretary at an all-male Oxford college (sacked for undisclosable reasons), at an airline (decided, after a crash and a hijacking, that she was safer elsewhere) and as a dress designer (quit before anyone noticed she was adapting
Vogue
patterns). She spent some years as a parent and as a painter before sensing that the day was approaching when she’d have to go out and get a Proper Job. With a nagging certainty that she was temperamentally unemployable, and desperate to avoid office coffee, having to wear tights every day and missing out on sunny days on Cornish beaches with her daughters, she wrote her first novel,
Just for the Summer
. She has now had eight novels published by Black Swan.

and published by Black Swan

‘Any thin Celts?’ The waitress was standing so close that Jess Nelson could smell fabric conditioner on the floppy sleeve of her white blouse. Comfort, Bounce or possibly Lenor? Jess sniffed delicately, like a cat scenting distant mouse, then remembered she’d been asked a question, a peculiar one.

‘I
said
, can I
gechew
any
thin Celts
?’ The girl was speaking loudly and slowly, perhaps assuming, as they were in a Gatwick Airport coffee shop, that Jess was From Abroad. The question still seemed absurd and an assortment of skinny Cornish and Welsh nationals marched through Jess’s mind. She frowned, then smiled as some sort of understanding took over. ‘Oh I see! Right! No thank you, I don’t need anything else, I’m fine.’ The waitress sighed, tore off a slip of paper from her pad and slapped it smartly down next to Jess’s empty coffee cup. ‘Pay at the desk,’ she ordered and strode off, leaving a wake of laundry scents.

Jess picked up her bag, paid for the coffee and began the long trail back through the airport to the short-stay car park. All around her people were shopping manically as if this was their last-ever chance, darting in and out of the Body Shop, cramming on straw hats in Monsoon, hanging about in Knickerbox eyeing the slinky underwear and browsing in Waterstones seeking something to read that wouldn’t disappoint on a sun lounger. How easy it must be to forget you were supposed to be travelling somewhere, to forget that the plane now standing at Gate 31 was waiting to take you away from all this. With all the passengers’ brains lulled into shopping-mode no wonder there were so many exasperated tannoy announcements along the lines of ‘Will the last remaining passengers for flight whatever
please
make their way
immediately’
etc. etc. Jess and the family used to be just the same: the three children geed up dangerously close to tantrum point with excitement, Matthew sensibly telling them all to slow down, they’d got a long fortnight ahead, no point in squandering holiday money on stuff you could get in any high street at home. And Jess herself would be silently going through lists in her head, had they got toothpaste, remembered Lomotil just in case, would she need Tampax, Nurofen, Calpol, Elastoplast …

Oliver hadn’t let a mundane little thing like shopping hold him up today. Classing himself grandly as a Traveller, superior to the dallyings of a mere Tourist, he’d quickly checked in his backpack and raced straight through to Departures with no hanging about to let Jess do her mumsy last-minute routine on him. In his eyes she’d detected no faltering doubts about this long, rite-of-passage trip, more a barely concealed
terror that she’d fall to the floor sobbing and pleading with him not to go, not to abandon her to the mercy (what mercy?) of The Girls. There’d barely been time to say ‘Call us when you get there,’ when he’d hugged her briefly and made a bolt for Passport Control. She tried to fix that last view of him in her mind. The turned head, the fast rangy walk, the wide grin full of perfect teeth, the dark floppy hair that would probably be six inches longer and tied back next time she saw him. She also tried, as she sped along the moving walkway back to the car, to fix for herself an accurate idea of his height: just that small bend as he hugged her, that made him, what, about two inches taller than that man over there with the battered leather briefcase? Or was he even taller than that? It was always a slight surprise to her, just how much space her once-baby son now occupied. There’d been that strange teenage growth-spurt time, four or five years back, when one morning he’d ambled downstairs and she could see quite clearly that the 5′5″ that had gone up to bed the night before had come downstairs as 5′7″. He’d walked across the kitchen and banged into a chair because his accustomed number of steps took him that bit further than they had the day before. What happened to nineteen years? How come a year was so luxuriously long when you were nineteen yourself but so breathlessly brief when your eldest child was that age?

Jess settled herself into the Golf’s driving seat, firmly trying to convince herself she was not inclined to tears. You had to let your children go – their independence was proof that you’d got their upbringing right. If only it didn’t happen so fast though, not quite so suddenly. Couldn’t he have gone to live in say, Devon, for a few months instead? Why race off to the furthest
continent? The car still smelled faintly of Oliver, a mixed scent of Lynx deodorant, Marlborough Lights and new trainers. She looked around quickly, half expecting to find a forgotten essential item, perhaps the All-Australia bus pass that Matt had bought him as a last-minute surprise or the
Rough Guide to Oz
, that backpackers’ bible. He’d left nothing though, apart from his pack of chewing gum which lay among the petrol receipts and her own Starburst wrappers in the cubbyhole in front of the gear stick.

Eventually, mindful that she’d already paid for the parking and couldn’t hang about, Jess started the car and wearily began the drive back to London. She switched on the radio and joined the middle of a discussion about ovarian cysts. ‘… Easily the size of a grapefruit …’ she caught someone saying in alarmingly comfortable tones, before she speedily pressed buttons and settled for some house/techno sound that Oliver would have liked. She definitely didn’t want to hear about female ailments: thirty seconds into it and she’d be prodding her side as she drove, wondering if there was a strange new lump or if her insides always resembled a loose bag of apples. Discussions like that, along with Facing the Menopause, The Empty Nest and Midlife Men: The Far Side of the Crisis, reminded her of the depressing fallibility of increasing age. So far Jess had escaped pretty well, health and looks more or less satisfactory. She went to the gym three times a week (with glamorous neighbour Angie, who provided, with only half the effort that Jess put in, a figure to aim for). When she read about
middle
age it had never occurred to her, so far, that this was
her
category. Oliver setting off on his travels was only the first of what was likely to be a string of mind-muggings
waiting round life’s shadier corners. Still, she thought as she headed for the M26, at least this week she wouldn’t have a problem deciding on what to write. Nelson’s Column in the
Sunday Gazette
(page four, the Comfort Zone supplement) would be about the first Gap Year departure from her household. It would be funny, frivolous and probably contain just a little bit of self-satisfaction. She wouldn’t write about feeling bereft: readers could have their amusement but they weren’t allowed into her soul.

‘So can I have his room?’ Natasha, being fifteen and therefore as yet with no instinct for the right time to ask for this kind of thing, was standing in Oliver’s doorway checking over the stuff he’d left scattered around. From her teenage point of view, far from being bad timing, she’d picked this vulnerable just-back-from-the-airport moment quite deliberately, getting in quick before her sister Zoe thought of it and before Jess, still in her coat, had even had time to have a restorative cup of tea and a bit of a think.

Jess took in the sight of Oliver’s discarded clothes, unsorted laundry, strewn-about tapes, CDs and videos (how many were long-overdue rentals, she wondered). Any miss-you poignancy this vision might have had was diminished by the scale of clearing up that it would need. This was the biggest of the three first-floor bedrooms, overlooking the front garden and giving anyone with a penchant for serious nosiness a good view of the road and all the neighbours’ comings and goings. Natasha had always said it was wasted on Oliver: boys were neither interested in the pursuit of gossip nor did they need the kind of clothes capacity that girls did.

‘It would make sense,’ Natasha persisted, walking into the room and spreading out her long skinny arms to spin round and glory in the space. ‘I mean, what did Oliver ever want with a double built-in wardrobe? It was wasted on him, always mooching about in the same old stuff. I bet it’s full of old unwashed football kit left over from school.’ She opened the door and held her nose, pulling a face of exaggerated disgust. ‘Boy-pong. BO and feet. I could fumigate it for you. And
Mu-umm
,’ a familiar wheedling note came into Natasha’s voice, ‘think how much tidier I could be if I had room to put all my stuff away. I’d keep it really organized, I promise.’