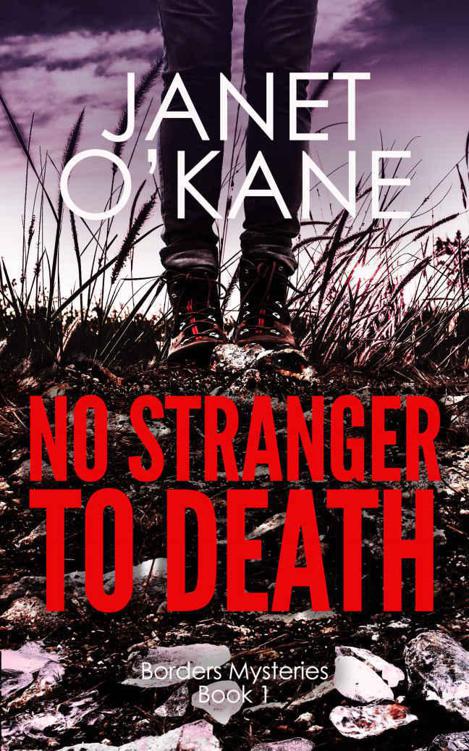 NO STRANGER TO DEATH

NO STRANGER TO DEATH

All rights reserved. No part of this e-book may be reproduced in any form other than that in which it was purchased and without the written permission of the author.

This e-book is licensed for your personal enjoyment only. This e-book may not be re-sold or given away.

This book is a work of fiction. Any resemblance to actual people, living or dead, is coincidental. While many of the Borders locations I describe are real, the village of Westerlea is not.

Zoe Moreland saw her first dead body at the age of twelve, and had seen many others since. But that morning, for the first time ever, she could not tell if she was looking at the remains of a man or a woman.

The blackened form lay in the ash of Westerlea’s Guy Fawkes bonfire, surrounded by smoke-stained, metal debris and charred pieces of wood. Coated from head to foot in a thick layer of what looked like melted plastic, it seemed barely human, more a grotesque department-store mannequin which had been posed with elbows and knees flexed, fists clenched. Wisps of smoke rose from the torso.

It was still burning.

Zoe took a step back, glad that the worst cold she’d had in years currently prevented her from smelling anything. If only Mac had been similarly afflicted. She turned to the dog who had led her there. ‘So this is why you wouldn’t come when I called.’ Mac wagged his tail.

Minutes ticked by. Zoe knew what she had to do, what any normal person would have done already. But most normal people had no real-life experience of the police, did not know that getting mixed up with them meant answering questions, giving statements, being asked more questions. She had only found this out when Russell died.

She considered her options. They were alone, just her and Mac and that poor soul on the ground. Only the pub overlooked this part of the field and its curtains were still closed. She could walk away this time, feign shock when someone eventually told her the news.

Apart from the rumble of an occasional vehicle passing through Westerlea it was very quiet, yet another unsettling aspect of her new life in the country. Then the sound of high-pitched voices reached her, and she remembered the primary school only a short walk away.
What if the next person to come across this horror was a child?

‘You’re a hard-hearted bitch.’ Those words had echoed inside Zoe’s head during the months since they were spat out at her, and they returned now.
Perhaps they were true.

She reached inside her coat. Plastic bag, dog biscuits, tissues, no mobile. Usually she would no sooner have left without it than forget to put on boots. This cold must be affecting her brain as well as her nose.

Zoe sighed then started to lead Mac towards the village. Rather than knock on a stranger’s front door, she would go a little further and ask Brian at the shop to call the police. But they were already there, a car with yellow and blue markings parked outside a grey rendered bungalow on the other side of Main Street. A brass plate told visitors the drab little house was called Horseshoe Cottage, although the rusty horseshoe nailed above its front door did nothing to help it live up to this folksy name.

After tying Mac’s lead to the fence separating the bungalow from its neighbour, Zoe rang the doorbell. Getting no response, she let herself in. ‘It’s Doctor Moreland. Is anyone home?’

Her attention was caught by a group of framed photographs on the hall table which tracked the transformation of a blonde, smiling child into a blonde, sulky teenager. In pride of place at the front was a snapshot of the same girl, face flushed and hair tangled, cradling two tiny babies wrapped in white towels.

Zoe turned with such a start she knocked over one of the photographs. A young man, barely out of his teens himself, with bum fluff sideburns and a rash of acne across his chin, smiled at her from the other end of the hall.

‘They didnae tell me you’d been called,’ he said, indicating the radio attached to the front of his black uniform. ‘Come on through. He’s in here.’

‘Geddes. Aye, but you’ll be wanting to see your patient first?’

The policeman opened a door to reveal an elderly man in striped pyjamas sitting with a Jack Russell terrier on his lap. It was Jimmy Baird, one of the few villagers Zoe could put a name to, who used to run the pub. His dog lay quietly while he plucked at the hair on its neck with a trembling hand.

Zoe went over and crouched down beside him. ‘Hello Mr Baird. I’m Doctor Moreland.’

He stared at her and opened his mouth, but seemed unable to form any words. Before Zoe could explain she had not brought her medical bag so would telephone the surgery for another doctor to come out straightaway, the constable spoke again.

‘He’s upset because his wife’s missing. She was supposed to be visiting her daughter in Newcastle but she never arrived.’

Zoe stared at the terrier, unable to remember what she had been about to say.

‘Doctor, are you all right?’ Geddes asked.

Out in the hall, Geddes blanched when Zoe told him what she had found in the remains of the bonfire.
He really was much too young to handle this on his own.
To his credit, though, he took control of the situation, fetching a neighbour to sit with Jimmy then accompanying her to the bonfire site behind The Rocket. After scrutinising the corpse he stumbled backwards, pale and perspiring, the reality of what, he had confided on the way there, would be his first dead body far worse than anything he could have imagined. And he did not have the benefit of a blocked nose.

Zoe led him upwind from the smoke still coming from the body. ‘Deep breaths,’ she instructed, anxious to prevent him from keeling over or heaving up his breakfast.

Geddes did as he was told and, with youthful resilience, quickly regained some colour. He moved away to use his radio, too far from Zoe for her to listen in. She stamped her feet and pulled her woolly hat down as far as it would go, while Mac sat patiently next to her.

When Geddes returned he seemed almost cheerful, ready perhaps to enjoy the prestige of being first on the scene of a serious crime.

‘Can I go home now?’ Zoe asked. Mac, sensing they were about to make a move, started to wag his tail.

‘I’ve been told to keep you here until a senior officer arrives to take over.’

Chilled and resentful at being trapped in a process she had no control over, Zoe could not help responding with words she knew would hit home. ‘All right. As long as I don’t have to be around when it’s taken away.’

She paused, giving him just enough time to dread what was coming next.

‘They won’t have taught you this at police college, but bodies burnt that badly need extremely careful handling. Or else, when they’re moved . . .’

‘The flesh just falls off the bones like an overcooked chicken.’

The number of crime-scene professionals clad in white coveralls steadily increased at the bonfire site during the next hour, although not as quickly as the flock of inquisitive villagers restrained by crime-scene tape and Constable Geddes. Instructed to stay within the cordoned-off area, Zoe could not hear the onlookers’ words but they had to be speculating about her part in the drama.
So much for keeping a low profile.

Hanging around with no active role to play, no established procedure to follow, gave her time to brood. The fun everyone had at last night’s party took on a different hue when she imagined what was happening, unseen, only a few metres away. While they swirled sparklers and exclaimed at fireworks exploding overhead, was someone trapped inside the bonfire, aware of the mounting heat and struggling to breathe through the smoke?

Unable to bear standing idle any longer, she gathered up Mac’s lead and was about to slip away when a uniformed sergeant deigned to come over. He looked curiously at the dog, took Zoe’s details and told her to go home. An officer would be in touch.

Which was precisely what she had wanted to avoid.

Her mobile lay on the kitchen worktop next to the kettle. A text was waiting.
What’s up doc?

Zoe texted back.
Fancy a coffee?

Keeper’s Cottage was freezing. Given the promise of their size, its storage radiators gave off a pathetic amount of heat. Zoe fed Mac and the cat, then pulled a Supertramp CD out of the Pickfords’ box in the hall and put it on, singing along as she lit the woodburning stove and brushed hair off Mac’s armchair. Like most of the furniture in the cottage this had seen better days, but she saw no point in bringing her own out of storage yet.

Mac ran into the hall, throwing himself at Kate Mackenzie while she pulled off her shocking-pink hat and unwound a matching scarf. As her visitor entered the sitting room, Zoe rushed to turn off the CD player.

‘Don’t do that on my account,’ Kate said, laughing. ‘And don’t look so embarrassed. It’s great that you forget. I wish everyone else would.’ Her voice retained the soft Borders accent she’d had at the age of twelve when meningitis had robbed her of her hearing. ‘You’ve no idea how irritating it is when people speak verrrry sloooowly because they don’t think I’ll keep up otherwise.’