No Technology Is Invincible (The Death Prophecies-Book Four 4) 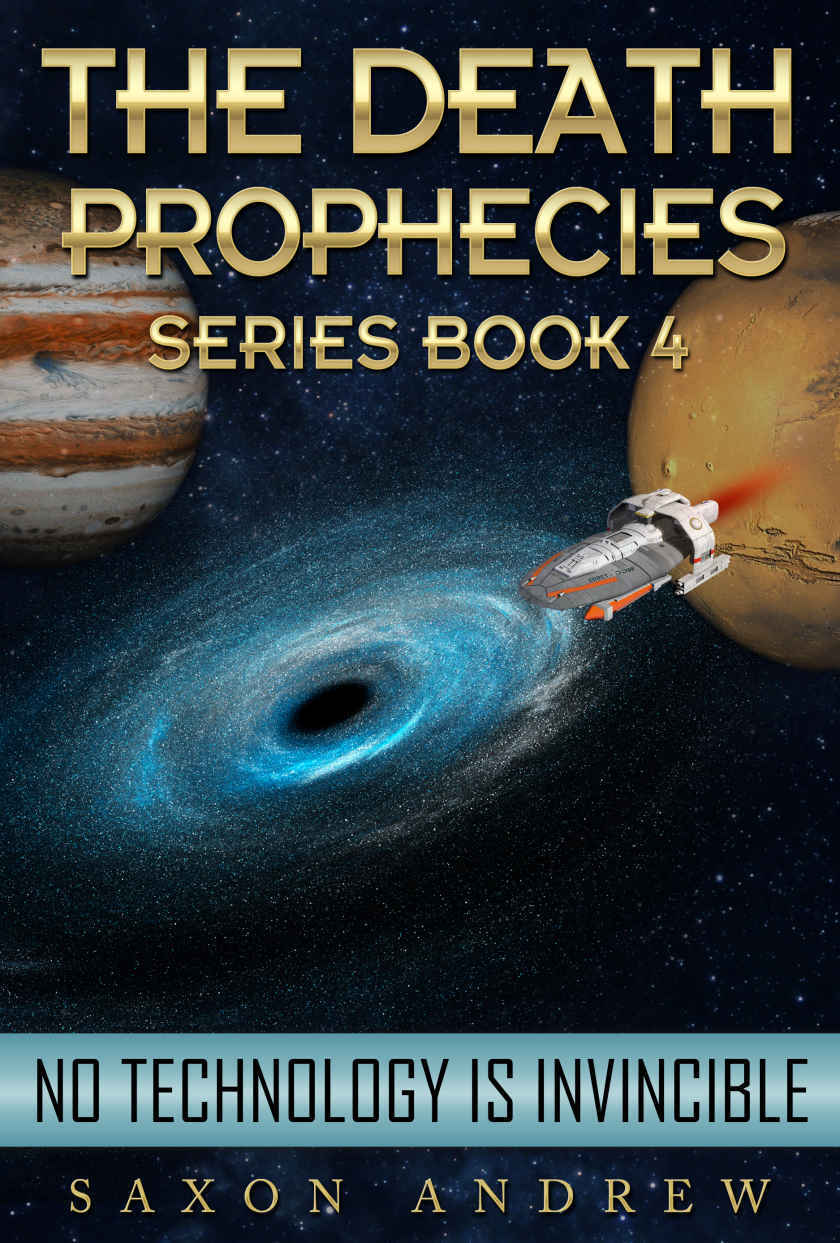 The Death Prophecies
No Technology Is Invincible
Contents

The Power of a Queen

A Rose Grows in Weeds

Finding Keepers
(The Seven books above are audio books at Audible.com)

Searching for a Hero

Ashes of the Realm

Death of an Empire

The Return of the Realm

Pray for the Prey

The End of Time

Star Rover-Running Out of Time

Lens of Time-Chosen To Die

The Fight for Creation

The Lost Prince
(An audio book at Audible.com)

The Search for Orion

The Legacy of a Conqueror

Defending Earth
The Sequel Series to Escape to Earth

The Coming of the Prophet

The Eyes of the Prophet

The Unknown Enemy Will Kill You

No Technology Is Invincible

A
dmiral Gabriel Eagle slouched back in the command chair of the small one-man scout warship and stared at the black hole spinning in the distance. He had checked out the small vessel from fleet’s inventory and flew out to the Milky Way’s center to take some time to be alone and think about his life. He stared at the black hole and realized he didn’t reflect on his life very often. The last time he could remember looking at the direction his life was headed was when he was six years old staring up at a sky full of stars in the Black Hills of Dakota. The campfire did little to diminish the brilliant gems flashing in the heavens above him.

His father saw him staring and came over from the fire and put his arm around his shoulder and pointed at the sky, “What do you see, High Flyer?”

Gabe smiled. His father had nicknamed him High Flyer because of their last name, Eagle. He looked into his father’s eyes and smiled, “They’re so beautiful, Father. I’ve never seen them more clearly than tonight.”

His father looked up with him and smiled, “Up there is the highest place you can fly. If you choose, one day you can go out to see them up close.”

Gabe smiled as he saw a meteorite flash across the horizon, “You mean go out in a spaceship?”

“That’s exactly what I mean. However, that’s a decision that you must make carefully.”

Gabe looked away from the stars into his father’s eyes, “Why?”

His father looked up at the sky and tilted his head, “Because sometimes, things don’t look as beautiful up close. You might find that seeing them up close diminishes their beauty, High Flyer.”

Gabe looked up with him and after a few minutes of silence said, “You call me High Flyer. Up there is where I want to fly. They can only be more beautiful up close.”

“Then you will have to learn the things that make the starships able to go there. This is a journey you will have to devote the rest of your life to accomplish. The fight to be one that is chosen to fly there is very intense. Are you willing to do what’s necessary to go there?”

Gabe blew out a breath and shrugged, “The Eagle must use its wings to lift it into the heavens. I know the view from high above has to be worth it.”

His father nodded and sat with him as they stared at the distant stars well into the night.

He rubbed his forehead just above his eyebrows feeling the pressure of knowing that soon, he was going to lead the combined Earth and Bosrean Fleets through this black hole to eradicate that enemy. He didn’t want to destroy every civilized planet in the Carand Galaxy on the other side of the black hole but there was really no choice. If any of those violent aggressive civilizations survived, they would rebuild and it would have to be done again.

He sighed and felt his eyes start to tear up. He was deliberately avoiding thinking about why he had really come out here to the center of the galaxy. Janell had broken off their engagement. It was like a kick in the stomach. Oh, she had been extremely polite and hugged him after she told him but he was devastated and it took all of his self-control to hide his emotions. She was the first woman he had ever truly loved. He had been so focused for years on being successful in the Academy that he never took the time for social things. This was a pain with which he was unfamiliar.

He looked at the bronze plaque over the main wall monitor and read the Death Prophecies slowly trying to get her out of his thoughts and find a way to deal with his sorrow.

Death Prophecy Number One; Confrontation must be avoided until it is absolutely unavoidable.

Number two; Never do what others can.

Number Three; The unknown enemy will kill you.

Number Seven, Only knowledge can save you.

Number Ten: Only worry about things you can control.

He stared at them and knew he had followed number five when she told him it was over. But now that he was alone in empty space his emotions threatened to overwhelm him. He closed his eyes and felt his grief fill him. He had always been proud of his academic record and his intelligence. But Janell insisted his intelligence made her feel like a dummy. He was just too smart for her and she would always feel inferior around him. She handed him the ring he gave her and left him standing alone outside Fleet Operations. He immediately checked out this small ship and came here to deal with his grief. He was woefully unprepared for dealing with this.

He never felt this sense of loss before and was woefully unprepared to deal with it. He was always upbeat and energetic and knew he had the world by the tail and was enjoying the ride. He was not prepared to cope with this. So, he sat in space looking down into the spinning monster below him while he pulled himself together. After two days, he came to the realization that she was right; it wouldn’t have worked. The feelings he caused her would have eventually killed their feelings for each other. He had to force himself to follow the advice given in the tenth Death Prophecy and learn to accept she was gone.

“Admiral Connor requests you join him in his office for a meeting in two hours.”

“Did he say what it was about?”

“He says the invasion plans might have to be delayed.”

Gabe sat up straight in his chair, “I’m on my way!” Gabe turned the small ship around and pushed the thruster handle fully forward. Something bad must have happened while he was out here grieving. Did the Builders come through the black hole in Andromeda? He flew at top speed and was glad to have something to take his mind off his personal life. He needed to stay busy.

“I broke off my engagement with Gabe.”

China stared at Janell, looked at the ceiling, and rolled her eyes, “You are absolutely the craziest woman I’ve ever known. First Dillon and now the smartest fastest rising officer in Fleet. Are you insane?”

Janell sighed and sat down, “China, I took your advice.”

“What! I’d never advise you to leave Gabe!”

Janell lowered her head as she quietly said, “You told me after Dillon refused to take me back that the next time I need to make absolutely certain that the next man I chose was the right one for me.”

China stared at her and then slowly nodded, “I did tell you that, didn’t I?” Janell nodded. “So what’s the problem?”

“China, he makes me feel stupid.”

“Well, get in line, Janell. He makes all of us feel a little dumb.”

“Yes, but every time we discuss an issue I tell him what I think and he comes up with five or six things I’ve missed. It’s infuriating.” China just stared at her and Janell looked at her with a frown, “And it’s not just about major things but every little thing that comes up. It makes me want to just shut up and not bring up anything because he’ll make me feel dumb.”

“You are not dumb, Janell.”

“I know that! But being with him longer than five minutes makes me feel stupid.”

“So very much, China, but love alone is not enough. I’d end up detesting him over time and love would die a death of a thousand things he’ll tell me I’ve missed.”

Janell sighed, “How would I know? He has that Indian way of showing no emotion while that giant brain of his is processing everything. Carol told me that he checked out a Scout and left right after I broke the news to him, so he must have been pretty upset about it.”

China sat down on the bed beside Janell and took her hands, “Are you sure about this? You’ve probably lost him for good.”

Janell had tears in her eyes as she shook her head, “I’m not sure about anything but I just know that I can’t live like this. It erodes my sense of self-worth.”

“Then you did the right thing.”

“Thank you, China. I do respect your opinion.”

“Things might be…difficult, when the two of you have to work together.”

Janell shook her head, “No, he won’t allow it. He’s bigger than that and far too professional. He is a good person and won’t make me feel bad about what’s happened.”

“Will you be alright around him?”

“I’ll have to be! This is my doing and I’m going to have to live with the consequences of my decision.” China nodded and hugged her.

Gabe flew in at high speed and spiraled down to the roof on the top of the Fleet Operations Building. He exited the small ship and looked at the Ensign in the assignment booth as he ran by, “Send this ship back to storage.”

Gabe went to the elevator and pressed the button for Admiral Connor’s floor. He arrived and saw Carol at her console. She nodded and waved him in. Gabe passed the two armored security guards and walked through the double doors. Steve saw him and waved him forward. Gabe pulled out a chair from the wall and sat down in front of Admiral Connor’s desk. Steve was on his communicator and Gabe heard, “Did you get a scan around that galaxy or not?!” Gabe watched Connor listen and then nod, “Then take another look at the scans and tell me what you have within the next three hours.” Connor paused and said, “I don’t care how long you think it will take! Assign enough people to the task and get it done!” Connor punched his panel and looked at Gabe, “Thank you for coming so promptly.”

“You’re familiar with Professor Hilo at the Academy.”

“He teaches the advanced course on strategic thinking. He really challenged me in that course.”

Urgent Care by C. J. Lyons
Crashing Down by Kate McCaffrey
The Longest Pleasure by Christopher Nicole
The Last Chamber by Dempsey, Ernest
Once Upon a Valentine by Stephanie Bond
Aliena Too by Piers Anthony
The Decaying World Saga (Book 1): Tribes of Decay by Garza, Michael W.
Boys in Blue 03 - Dangerous Distraction by Mia Watts
Endless by Amanda Gray
Zodiac by Romina Russell