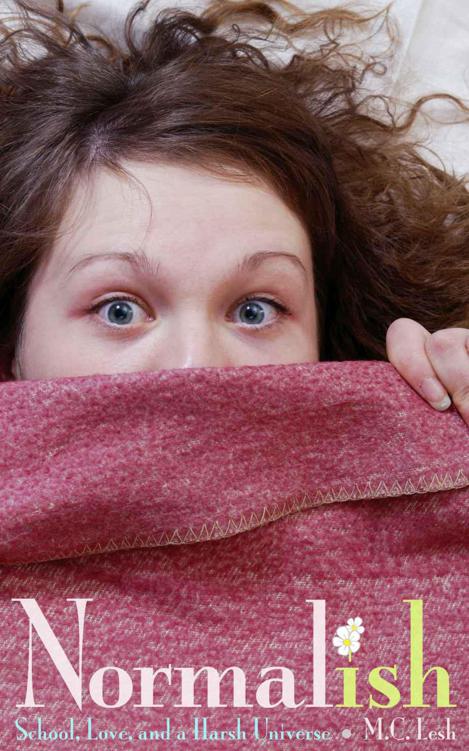 This book is a work of fiction. While references may be made to actual places or events, the names, characters, incidents, and locations within are from the author’s imagination and are not a resemblance to actual living or dead persons, businesses, or events. Any similarity is coincidental.

To Steven and Andrew, my loves.
And to anyone out there who’s ever felt like they didn’t quite belong.

When I was twelve years old, I learned not to talk about death.
People would get uncomfortable. They’d look away and change the subject. Or they’d say something stupid and wrong. Or the silence would become something you could almost touch. Kids at school would have one of two reactions: either they’d give sympathetic looks from afar, or they’d stay completely away from me as if the death were contagious, like some type of incurable disease. I also learned that the simple (or not so simple) act of talking about death is painful—almost as painful as experiencing the death all over again.

Two years ago, my dad died while he was crossing the street. It was one of those random accidents that can happen to anybody. It wasn’t something contagious, unless you believe in that sort of thing, like fate or destiny or voodoo or black magic. But I don’t believe it was anything more than a horrible accident, and I learned to bury it deep inside. Now the sharp edges of pain have dulled to more of a rounded feeling, but it’s still there.

I think about death a lot. I think about the big questions of where we go after we die and what happens to us. One time my mom told me about how after my dad died, she’d dream about him, and in her dreams, he’d show up at the front door with a suitcase in each hand as if he were just visiting. Personally, I like to think he visited her while she slept and their souls could touch, then he’d return to wherever it was he’d come from. He came to her when she needed him the most—when his death was still fresh and raw. After about a year, she stopped having the dream.

Occasionally—when I wake up in the morning, walking to and from school, during class, and when I go to bed at night—I like to take a mental inventory of my life. When I’m in a glass-half-empty kind of mood, which is about fifty-one percent of the time, I start out with the things in my life that blow:

•
5. High school is much worse than I thought it would be.

•
6. My clothes are completely lacking in style—not to mention the fact that they’re
old
.

I’ve added a new topic to my life-blows list:

•
9. Becca has been acting strange. (Stranger than usual.)

Lately I’ve been thinking about “normal” and how there’s this fine line between being an average, ordinary person and being completely out-of-your-mind crazy. “Normal” is all about perception. I mean, isn’t “normal” what the majority of people do? So what if suddenly ninety-nine people out of a hundred decide to walk their iguanas down the street while wearing a tutu? Wouldn’t the one guy who didn’t own an iguana and wear a tutu be the freak? And isn’t it the ones who seem normal on the outside who, in actuality, know where the bodies are buried in the backyard or are secretly in love with their toaster?

Am I normal? I’m a freshman, I hate school, I think most of the other kids are idiots, and I don’t fit in. Most days I feel like I’m an alien from another planet observing the lives of Earth teens. But ninety-nine out of a hundred high-school freshman would probably say
that’s
normal.

I have a tendency to be too sarcastic, but I’m working on that. I live in North Hollywood, California, which sounds much more glamorous than it is. There are some really nice areas of town and some not-so-good ones that you wouldn’t want to walk through any time of the day. But since this
is
Los Angeles, you can barely turn around without running into a celebrity of some kind. Like I once saw a movie star picking her nose at the Farmers Market, and one time I saw a soap opera actor at IKEA looking at dish towels. You can almost always see someone at least familiar looking, like an infomercial host, at the Whole Foods on West 3rd Street.

I’m a movie buff, especially classic movies, when men were handsome and women were glamorous, and everything was like a fairy tale, because people wanted to
escape
their lives for a couple of hours. Today, everything is about depressing realism. Everyone knows that life can be depressing and real enough as it is.

I’ve thought about which movie my life is most like. The one that really sums up my feelings the best is
10 Things I Hate About You
, but I really just like the title.

I thought fourteen would be better than thirteen. In some ways it is, but in others, it’s much worse. Which leads me to high school. With the first week over, I have only this to say: it’s much worse than I thought.

One horrible thing that was particularly awful and egregious happened the first week of school. In English, our teacher Mr. Selden (a nice-looking, older man—broad shoulders, deep brown eyes, nicely-shaped eyebrows—someone I could really sit back and daydream about) asked us to do a quick-write about our family, which, by itself, was not so bad. What was horrible was the fact that he read it out loud. For everyone to hear. If I’d known this in advance, I would have either:

•
2. made it much less entertaining so that my teacher wouldn’t have felt the compelling need to humiliate me in front of the class.

If I had known my life was going to be made public, I wouldn’t have written about my sister Jill being bossy and overbearing, or how she literally has a cow when I squeeze the toothpaste tube from the wrong end, or how she’s been known to smack me upside the head for using the wrong subject-verb agreement.

I also wouldn’t have written about how I went to Ms. Liz’s Modeling School or how she taught me to make the perfect gin & tonic—one part gin to three parts tonic over three ice cubes with a twist of lime. (Since we weren’t
actual
model material, I think knocking back a few during Runway Class was her own personal coping mechanism. Also, I’m beginning to wonder if she ever really was a model.)

Lastly, I wouldn’t have mentioned Becca being strange. I mean, people know her. If she ever found out about it, I could get seriously hurt.

August 22, Later -
My Life As An Open Book
(Which I Don’t Recommend)

When Mr. Selden read my paper to the class
, I experienced this strange sensation of being disconnected, like I was listening to someone else’s horrible life story being read out loud for everyone to hear. He did
not
warn us that what we wrote could be used against us. (And I kind of hate him now, even though he’s still handsome.)

“I have a paper here from Stacy York,” he said as he peered over the top of his glasses. “Stacy, where are you?”

I raised my hand so he’d see me—kind of half-raised in self-conscious embarrassment.

Please don’t read my paper. Please, I beg you in the name of everything that is good in the world. Puppies, kittens. Fluffy, white bunnies. Toast with strawberry jam. Please don’t.
It was a slow-motion feeling; there was nothing I could do to stop him.

“This was quite good.”

First he cleared his throat, then he began to read my life to the class. I heard someone snicker in the back row. Miguel, the mouth-breather in the next desk, stared at me, mouth open as usual.

I wanted to hide.

Someone poked me in the back. It was Daria.

Chad sat in the next row laughing. I gave him a death stare. He ignored it.

Mr. Selden also glared at him, continued my public humiliation, finished reading, then asked, “Did you really mix cocktails for Ms. Liz? That’s very funny, Stacy. You may have a future as a writer.”

Would somebody please shoot me?

He softened the blow just a little by saying, “Stacy’s used humor to write an engaging essay. Humor’s an effective tool for holding your audience.”

This was where I stopped listening and started singing my favorite song in my head, “Loser,” hoping his moving on would take the focus off of me.

On the way out of class, Mr. Selden stopped me, looking a little concerned, probably from noticing the way my body had slumped for the rest of the class period.

“Hey, I hope I didn’t embarrass you by reading your essay.”

What could I say? This: “You ruined my life”? Or this: “I’ll never be able to show my face again, and it’s all your fault”? No, this is what I actually said, because I just didn’t have that kind of nerve: “No, that’s okay. Um, see you tomorrow.”

I wanted to hide. But I couldn’t, because I’m a freshman. My choices are limited.