BOOK: Odds and Gods
3.3Mb size Format: txt, pdf, ePub
Read Book Download Book
ads
‘Quite so.’
‘Which is why,’ said Mrs Henderson, taking a deep breath and hoping very much that she hadn’t completely misinterpreted the messages emanating from under Julian’s eyebrows, ‘I’ve taken the liberty of engaging a, um, private enquiry agent to see if he can, um, find your godfather for us.’
‘Splendid. Splendid.’
‘A Mr Lundqvist.’
‘
Ah
.’
‘He came very highly recommended.’
‘Top rate man. Exactly what I’d have done, in your position.’
‘Oh I
am
glad.’
Julian allowed himself the luxury of a smile. It would cost a paying client about a year’s salary to be smiled at by Julian, but he treated himself to a smile a month at cost. ‘If Kurt Lundqvist can’t sort this business out,’ he said, ‘nobody can.’
The same Kurt Lundqvist was, at that precise moment, locked in hand-to-hand combat with a tall gentleman with projecting teeth and a conservative taste in evening dress at the bottom of an open grave somewhere in what used to be called Bohemia.
It should have been a perfectly straightforward job - go in, garlic under nose, whack the hickory smartly through the aorta and home in time to catch the closing prices on Wall Street - but he’d recently taken on a new assistant, and she wasn’t yet a hundred per cent
au fait
with the technical jargon of the supernatural contract killing profession.
‘Look,’ he gasped through clenched teeth as the Count’s icy fingers closed around his throat, ‘can we cut this a bit short, because I’m due in Haiti for a rogue zombie at six-thirty. I don’t like to rush you, but . . .’
A right pillock he’d looked, reaching into his inside pocket and fetching out a five-pound lump hammer and a prime cut of best rump steak. He would have various things to say to Ms Parfimowicz when he got back.
‘Nothing personal,’ grunted the Count, ‘but I’d rather we went through the motions. Aaaaagh!’
‘Okay, that’s fine,’ Lundqvist replied, as his right hand finally connected with the butt of his .40 Glock automatic. ‘I’m about through here anyway.’
The bullet wasn’t, strictly speaking, silver; but it was a Speer 170-grain jacketed hollow point, backed by six grains of Unique and a Federal 150 primer. By the time the echoes of the shot had died away, the Count didn’t seem in any fit state to discuss the finer points of metallurgy.You would have to be abnormally thin-skinned to take ‘Gluuuurgh!’ as any sort of valid criticism.
Nevertheless, Lundqvist felt peeved. It wasn’t the way these things ought to be done. You had to preserve the mystique. Once people cottoned on to the fact that any Tom, Dick or Harry could blow away the Undead with a factory-standard out-of-the-box compact automatic, they wouldn’t be quite so eager to pay through the nose for the services of a top flight professional.
A quick glance at his watch told him he was badly behind schedule. A quick scout round produced a three-foot length of broken fence post, and a few strokes of his Spyderco Ultramax lock-knife put enough of a point on it to do the job. He was just dusting himself off and searching the pockets for any small items of value when his bleeper went.
‘Lundqvist here.’
‘Oh Mr Lundqvist, I’m sorry to disturb you like this, I hope I haven’t called at an inconvenient moment.’
‘No, it’s okay. While I think of it, what I had in mind when I gave you the equipment list this morning was stake S-T-A-K-E, not—’
‘Oh gosh, Mr Lundqvist, I’m most terribly sorry, really I am, I never thought—’
‘That’s fine,’ Lundqvist broke in - in order to have the time to wait for a natural break in the flow of Ms Parfimowicz’s apologies you had to be a giant redwood at the very least - ‘it wasn’t a problem as it turned out. Just remember for next time, okay?’
‘I will, I promise. I’ll just quickly write it down and then I’ll be sure to remember. That’s stake spelt S-T-A...’
‘Ms Parfimowicz,’ Lundqvist said firmly, ‘quiet. Now, what was so goddam important?’
‘Oh yes, I’m sorry I got sidetracked, I must stop doing that, it must be so
irritating
for you. A Mrs Henderson called - she’s not in the card index but she knew the private number so she must be genuine, don’t you think - and she wants you to kill a god.’
There was a brief pause while Lundqvist grabbed for the receiver which he had somehow contrived to drop. ‘I don’t think I heard you right,’ he said. ‘
Kill a god?
’
‘That’s what she said, Mr Lundqvist. Of course I could have got it down wrong, I know I’m still having trouble with taking the messages off the machine, but I’m pretty sure—’
‘Mrs Henderson, you said?’
‘That’s right, Mr Lundqvist. Do you want me to spell that back for you?’
‘I’ll be straight back. Call Haiti, cancel the zombie, make up some excuse. This is more important.’
‘Oh.’ The voice at the end of the line quavered slightly. ‘What excuse can I make, Mr Lundqvist?’
‘Tell them . . .’ Lundqvist grinned. ‘Tell them I had to go to a funeral.’
CHAPTER SIX 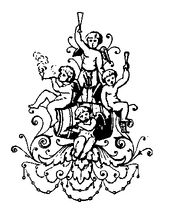