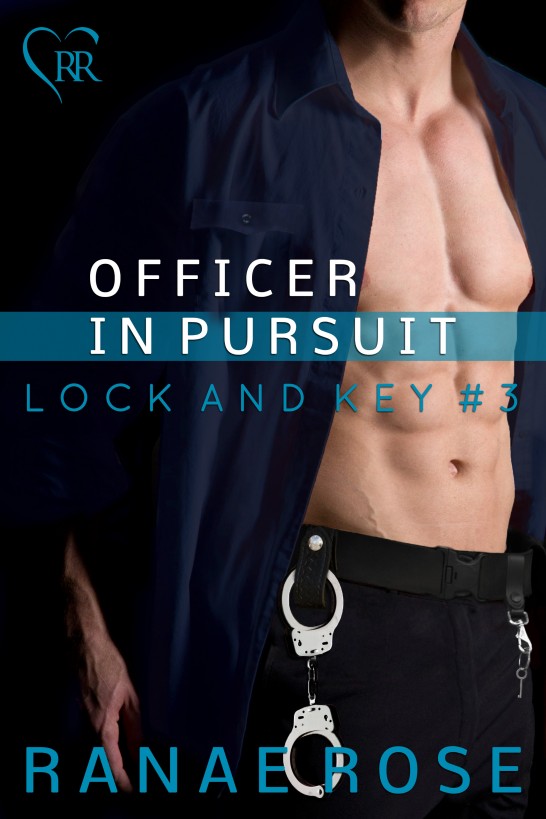 eBooks are not transferable. This book
may not be sold or given away. Doing so would be an infringement of
the copyright.

This book is a work of fiction. All
characters, names, places and events are products of the author’s
imagination and are in no way real. Any resemblance to real events
or persons, living or dead, is entirely coincidental.

All rights reserved. No part of this
book may be used or reproduced in any manner without written
permission of the author, except in the case of brief quotations
embodied in critical articles and reviews.

Secrets are what Kerry has lived and
breathed for the past three years, and those secrets may kill her,
if she’s not careful. Her new life in a coastal North Carolina
paradise is haunted by her past and ruled by her number one goal:
to not be noticed. Even if that means denying her attraction to
Officer Grey Morgan, who’s set his sights on her beyond any doubts
and despite all odds.

Grey has spent his summer in pursuit
of Kerry, but what he doesn’t know is that nothing with her is as
it seems and loving her comes with a price.

What she doesn’t know is that there’s
no risk he won’t take, and no way he’ll let her fight her demons
alone.

Kerry jumped when her phone chimed.
The text message notification broke the spell of her house’s
silence, reminding her that the magic of being behind locked doors
was imperfect.

She held her breath, swiped a finger
across the screen without reading the message preview, frozen in
her curled position on the couch. Like peeling off a Band-Aid, this
was something best done as quickly as possible. The sooner she got
rid of this anxiety – a reaction so deeply ingrained it was
automatic – the better.

Warm weekend coming
up
, the message read,
everyone wants to hit the beach. Wear something sexy for once
– Grey is coming
.

The message was from Sasha. Kerry was
too relieved to feel anything else, even exasperation.

Okay, let me know where and
when we’re meeting
, she
replied.

I mean it about wearing
something sexy. It’s almost October – this might be your last
chance this year to show off in a bikini.

Kerry didn’t do bikinis, and didn’t
bother replying. Sasha knew, and this wasn’t the first time they’d
had this conversation.

You know, there’s such
thing as playing too hard to get.

I’m not playing. And I’m
not wearing a bikini. Just drop it.

Sorry, can’t. As a true
friend, it would be wrong for me to let you keep wearing tankinis.
You have the body of a gymnast! Why work out constantly if you’re
not going to show it off?

A few silent seconds
slipped by, and Kerry kept her eyes on her phone, watching to see
whether it would light up with another stubborn reply from Sasha.
It was stupid, but every time her phone rang or chimed, she was
afraid she’d find a message from
him
–
or worse, answer and hear his
voice.

When another text came
through, it wasn’t
him
, and it wasn’t Sasha. It was Grey.

Heat blazed a trail across the bridge
of her nose, unfolding like butterfly wings across her cheeks.
Sasha’s messages haunted her thoughts.

Yes, she knew Grey was attracted to
her – despite her dowdy tankini – but that didn’t mean she was
going to start sashaying around like Sasha and seduce him on the
beach. She might fantasize about Officer Grey Morgan, who looked so
hot in uniform, but that was as far as she dared to take
it.

You up for the beach this
weekend?

She read and re-read Grey’s message,
as if some hidden meaning might present itself.

Great. I’ll be there.
Wanna get breakfast first?

Is everyone going?
She typed it before letting herself think, and
was immediately hit with a sense of regret. What was the
alternative – that he’d just asked her on a date and she’d been too
dense to realize it?

I could invite them. If
you want.

Her heart actually skipped a beat as
her finger hovered over the screen. She wasn’t meant for this:
flirting on the phone or – God forbid – in real life. For some
reason, Grey didn’t seem to realize that.

Still, she indulged in a quick mental
rundown of all the things she liked about him: his amazing body – a
buffet of suntanned muscles – and dark eyes that always sought out
hers, his fun personality. He was so unbelievably easy to be around
– when she was with him, it felt like the Earth’s gravity hardly
touched her. That was the clincher, the thing that really made her
like him. Unfortunately, it was also the thing that made them
totally incompatible.

Not that she was looking for a guy,
period, but Grey was the last person who’d be happy with someone
like her. Fun wasn’t exactly her middle name, and she was
self-aware enough to realize that.

Breakfast sounds
good
. She hit send before she could tack
something stupid onto the end, then regretted it. He probably
thought she was trying to be coy, or cold. She wasn’t sure which
one was worse.

Okay. Nine o’clock at that
café on Seaside Ave. The one with the shark cookies.

You mean Sea Glass
Café?
The place was popular, mostly
because it was one of just two cafés in the small town of Cypress.
It also served iced sugar cookies shaped like sharks, which were a
big draw for kids, and apparently Grey.

Yeah. See you
there.

He didn’t say whether he planned to
invite anyone else.

Kerry didn’t ask, either – didn’t have
the chance to – because the sound of a vehicle in her driveway
immobilized her where she sat in the center of the couch, one foot
wedged between two cushions.

The motor hummed the way motors did
when a car was barely moving, creeping to a halt. The soft pops and
snaps of stray stones being crushed came from outside the Cape Cod
she rented just beyond town limits, and the small sounds echoed
like gunfire in her mind. She could see the vehicle in her mind’s
eye – a three ton steel predator cutting through the night,
headlights searching for her shape beyond the veil of her living
room curtains.

Her heart pounded so hard it hurt, the
beat throbbing in her temples, giving her a headache. She looked
back down at her phone, forgetting all about Sasha and Grey’s
texts. What about the call before that – the one from the unknown
606 number?

606. Eastern Kentucky. A
call from what had once been home. Maybe, just maybe, a call
from
him
.

If he’d managed to discover her phone
number, he might know other things about her, like where she lived.
And if he’d found that out, he’d show up on her doorstep, she had
no doubt.

Was that him now? The thought latched
onto her, biting with brutal staying power.

The phone slid out of her hands, hit
the floor with a bang. The battery fell out, and the plastic case
flew free, failing to keep its promises to protect the phone.
Instantly, her heart rate spiked, rattling her pulse points with
painful percussion as a coppery taste filled her mouth.

She scrambled for the
pieces, glad for an excuse to stay low to the floor, away from the
windows. Frantic, familiar thoughts chased their way through her
mind. What if it was
him
– what if he broke in somehow before she could
get her phone back together, or before the police arrived, even if
she did manage to call 911?

Should she get her gun – the one she
kept under her bed?

No. Her hands were shaking so badly
that she couldn’t even put her phone back together. If she tried to
fire a weapon, she’d probably shoot herself or send a bullet flying
into a neighbor’s home. The realization dawned on her like a cold
sun, and she had to choke back a groan.

She broke a nail on the crappy phone
case, dropped the phone again. Maybe she’d broken it. If so, there
was no way she could call for help. She didn’t have a landline. She
hadn’t wanted one, because home phone numbers could be looked up so
easily. Having just a cell phone had seemed safer. But had her
precautions been enough?

The purr of an auto engine had turned
her peaceful evening into a waking nightmare. As she struggled with
the scattered pieces of her phone, a sense of déjà vu overwhelmed
her. She knew this feeling from her dreams, the ones she woke up
from drenched in sweat. She couldn’t call for help. All she needed
now to completely turn the scenario into one of her nightmares was
for the lights to stop working.

The thought filled her with genuine
terror. At the moment, an electrical failure seemed possible, even
likely despite the fact that she was up to date on her utility
bills and the house’s wiring had been redone just four years
ago.

She thought again of the Glock 17
beneath her bed, the one she’d sacrificed nearly two weeks of pay
to buy three years – a lifetime – ago, even though she hadn’t been
able to afford it. The gun store owner had tried to talk her into
something else, something small and pink and girly she could put in
her purse. She’d walked out with the Glock and a stash of hollow
point ammunition.

Now she knew: she wasn’t prepared to
use a weapon, no matter how reliable it was. She was too broken,
even after all this time. Suddenly, her years of metamorphosis
seemed more like years of scraping by. Surviving. Never really
changing.

She was aware that it was pathetic,
but her panic left her little emotion to spare on that
fact.

The
snap
of her battery being wedged
back into her phone echoed through the whole house, and then there
were the agonizing seconds of waiting for it to restart, blaring
the little jingle some faraway marketing department had mandated,
as if she didn’t know what kind of phone she used.

Finally, it was ready, the screen
glowing with a snapshot of the sun rising over the Atlantic Ocean.
She punched in a 9 and was so relieved to find that the phone
worked that she probably would’ve collapsed, if she hadn’t already
been on the floor.

She was about to hit 1 for the second
time when reality caught up with her.

What the hell was she doing – calling
911 because a car was turning around in her driveway?

She lowered the phone.

Making her way to the window was like
forcing herself to wade through a sea of half-dry cement, but she
did it anyway, made herself lift up the corner of a curtain and
peek out.

A sedan was pulling away from the curb
on her side of the road, colorless and generic in the night. The
red of its taillights burnt in her field of vision, and she barely
registered a Virginia license plate.

Just a lost tourist. Plenty of
Virginians vacationed on the North Carolina coast. She told herself
that over and over as she sank back down onto the floor, breathing
a sigh of tentative relief.

“Riley County 911. Where is the
location of your emergency?”

A voice rose from inside Kerry’s
tightly-curled fist, and a new type of horror dawned on
her.

“I misdialed,” she said, pressing the
phone to her cheek. “I’m so sorry. I misdialed.”