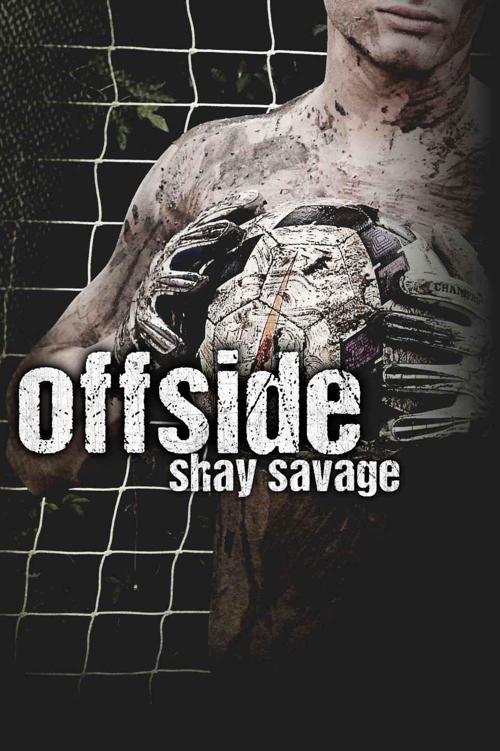 All rights reserved. No part of this book may be reproduced in any form or by any electronic or mechanical means including information storage and retrieval systems-except in the case of brief excerpts or quotations embodied in review or critical writings without the expressed permission of the author, Shay Savage.

The characters and events in this book are fictitious or are used fictitiously. Any similarity to real persons, living or dead, is purely coincidental and not intended by the author.

This book is for all the die-hard soccer fans out there who watched the World Cup along with me, cheered for the teams, and are currently suffering through withdrawal while counting the days to World Cup 2018.

As always, huge thanks to the team of people who are always there to encourage me and occasionally talk me down from the ledge: Adam, Andrea, Chayasara, Heather, Holly, Kandace and of course, everyone on my street team!

Chapter Three
- Out of Play

Other Titles by S
hay Savage

About the Author - Shay Savage

Ignoring Heather Lones’ grating voice coming from behind the goal, I tried to wipe the sweat from my eyes with the back of my glove, but I think all I really managed to do was to rub mud across my face. I tipped the ball with the toe of my cleat to the right and then to the left, keeping it close and within my control. The opposing team’s striker jogged up, trying to put a little pressure on me. I waited until the last possible second before bending over and grabbing the ball off the ground.

I had six seconds.

I tossed the ball up into the air, and then gripped it a little tighter as I ran to the top of the box. I could see Jeremy Martin, the central defender, heading left and drawing one of their midfielders with him, which left our striker, Mika Klosav, wide open. I punted the ball straight to him with a second to spare.

Damn, that chick was annoying.

With the score tied at one-to-one, I couldn’t afford to make any mistakes. It was only the first game of the season, but it was also the one that would set the pace for the rest of the year. Having what had to be the single most obnoxious cheerleader in the history of cheerleading right behind my goal was not helping the situation. I didn’t think I had ever even given her the time of day. No, definitely not. I might have taken her virginity when we were both drunk during the end-of-year bonfire down at the beach, but I definitely never told her what fucking time it was.

Seven minutes left in the game. I caught an easy one when it came straight at me, rolled it to Jeremy, and he took off down the side of the field. I signaled Klosav and midfielder Clint Oliver to head right, and when Jeremy belted an incredible cross to the far side of the box, Clint was there with the header.

Heather’s screech was enough for me to turn around and glare at her.

“Will you shut the fuck up?” I snapped. She just giggled and linked arms with some girl I hadn’t seen before. She was small and wearing a hoodie drawn up over her head. If I were hanging out with Heather Lones, I’d be hiding under a hood, too. The two of them skipped off toward the corner where the tunnel to the locker rooms was located. Well, Heather skipped and dragged the other chick with her. I shook my head and refocused on the game.

The forwards were moving up on me—jersey number sixteen on the right and number four on the left. The one on the right was offside by at least six feet, so I turned my attention to the other one who was currently blocked by Jeremy. The ball flew over the midfielders’ heads and number sixteen on the right trapped the ball and started to swing his leg back. I straightened up, waiting for the offside flag to go up and the whistle to sound as the ball flew past my right shoulder and into the goal behind me.

The ref blew the whistle and signaled a goal while I looked from him to the line ref at the side and back again. He was taking his booklet out of his back pocket and scribbling on it.

The ref shook his head from one side to the other as he marked the score two-all. I stomped up to the top of the box until I was nose to nose with him and tossed my hands in the air.

“This isn’t a Pee Wee game, you idiot!” I yelled. “We aren’t children! Are you fucking blind or just smoking crack?”

“Get back in position,” he said quietly as he shoved the book back in his pocket.

“Are you a fucking moron?” I clenched my fists. “Have you read the fucking rule book?”

The next thing I knew, I was seeing red.

A red card, that is.

I stomped off the field and through the tunnel to the locker rooms, staring at the ground and ignoring the cheers and jeers from the crowd. As I got to the mouth of the tunnel, Heather was babbling some bullshit, but I didn’t listen to her words. I was still looking at the ground, fuming and not watching where I was going, which is how I managed to slam right into Heather’s new friend.

“Get the fuck out of my way!” I bellowed before I even looked at her. When I did look down, I saw bright, wide blue eyes as they stared up at me in shock. I watched her lower lip disappear behind her teeth and felt my cock get hard.

Not during my last high school season.

I pushed past her and stormed out of the bright sunlight and into the dark hallway. Inside the locker room, I stripped, showered, and started dressing again without even bothering with a towel. I shook the water from my hair and watched droplets land on the mirror in front of me. I tried keeping my hair pretty short on the sides at least, but the top was just all over the place. I couldn’t seem to do much with my light brown hair even when I grabbed a glob of styling putty out of the jar and went to work on it. I turned to one side, examining the bruise running up my bicep that appeared to have a distinct hexagon shape to it.

For a moment, I stared into my own eyes. The hazel-green orbs looked angry in the harsh fluorescents, which fit my mood perfectly. I took a deep breath and dropped to the bench in front of my locker—locker number one, just like the number on my jersey. I was the fucking star, and everyone knew it.

Everyone except that fucking ref.

I wondered where he was from and who brought him to our field. I’d never seen him before. He had to be from out of town, or the fucker never would have carded me. The refs around here just knew better.

Grabbing my bag out of my locker, I fished out my phone and started going through contacts. I found the name I was looking for and hit the send key.

“Find out who was reffing my game today, and have the fucker’s credentials revoked.”

“No idea. Five foot five, bald, and blind as a fucking bat. If this had been a World Cup game, he’d have to be quietly removed from the country just to keep him from ending up with a bullet in his skull. Fucking idiot.”

“Damn!” I heard a low whistle through the phone’s speaker. “Gotcha. I’ll find out who it was. You won’t see him again.”