Old Kingdom 04: Across the Wall 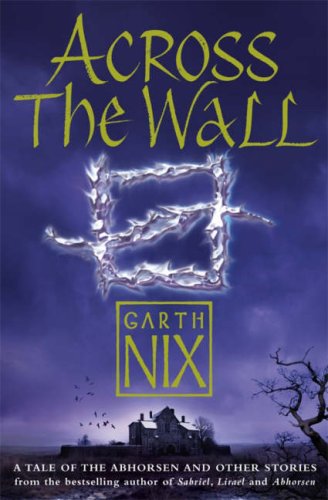 THE KEYS TO
THE KINGDOM SERIES:

This paperback edition published in 2005

Copyright © Across the Wall: Tales of the Old Kingdom and elsewhere, Garth Nix 2005

Across the wall: stories of the Old Kingdom and beyond.

To Anna, Thomas, and Edward

all my family and friends

Nicholas Sayre and the Creature in the Case

Down to the Scum Quarter

F
OUR YEARS AGO, AFTER A
C
HRISTMAS LUNCH
, my younger brother passed around a very small ‘book’ of four stapled-together pages that he said he’d found while helping my mother clean out a storage area under the family home. The book contained four stories written in shaky capital letters, with a couple of half-hearted illustrations done with coloured pencils. On the front, it had ‘Stories’ and ‘Garth Nix’ in the handwriting one would expect from someone aged around six.

The stories included such gems as ‘The Coin Shower,’ which was very short and went something like:

a boy went outside

he picked them up

I had no memory of this story or the little booklet, and at first I thought it had been fabricated by my brother as a joke, but my parents remembered me writing the stories and engaging in this bit of self-publishing at an early age.

I wrote ‘The Coin Shower’ and the other stories in that collection about thirty-five years ago, and I’ve been writing ever since. Not always fiction, though. In my varied writing career I’ve written all kinds of things, from speeches for CEOs to brochures about brickworks to briefing papers on new Internet technologies.

I first got into print writing articles and scenarios for the role-playing games ‘Dungeons and Dragons’ and ‘Traveler’ when I was sixteen or seventeen. I wrote for magazines like
Multiverse
and
Breakout!
in Australia and
White Dwarf
in the United Kingdom. I tried to crack
Dragon
magazine in the United States, but never quite managed to sell them anything.

This minor success in getting role-playing game articles or scenarios into print led me to try my hand at getting some of my fiction published. I’d written quite a few stories here and there without success, but when I was nineteen years old, I wrote a whole lot more while I was traveling around the U.K. and Europe, broadening my horizons. I drove all over the place in a beat-up Austin 1600 with a small metal Silver-Reed typewriter in the backseat, a couple of notebooks, and lots of other people’s books. Every day I’d write something in longhand in my notebook, and then that night or perhaps the next morning I’d type up what I’d written. (That established a writing practice that has continued for more than twenty years: I write most of my novels in longhand, typing up each chapter on the computer after I’ve got the first draft done in the latest black-and-red notebook. I now have more than twenty of these notebooks, plus one very outof-place blue-and-white-striped notebook that I turned to during the stationery drought of 1996.)

I don’t write everything in longhand first, though; sometimes I just take to the keyboard. Most of my short fiction begins with handwritten notes, and perhaps a few key sentences put down with my trusty Waterman fountain pen, but then I start typing. The pen comes into its own again later, when I print out the story, make my changes and corrections, and then go back to the computer. This process often occurs when I have only part of the story written. I quite often revise the first third, or some small part, of a story six or seven times before I’ve written the rest of it. Often the revision occurs because I have left the story incomplete for a long time, and I need to revisit the existing part in order to feel my way into the story again.

Both my short and long fiction works usually begin with a thinly sketched scene, character, situation, or some combination of all three, which just appears in my head. For example, I might suddenly visualize a huge old mill by a broad river, the wheel slowly turning, with the sound of the grinding stones underlaid by the burble of the river. Or I might think of a character, say a middle-aged man who has turned away from the sorcery of his youth because he is afraid of it, but who will be forced to embrace it again. Or a situation might emerge from my subconscious, in which a man, or something that was once a man, is looking down on a group of travelers from a rocky perch, wondering whether he/it should rob them.

All these beginnings might come together into the story of a miller, once a sorcerer, who is transformed into a creature as the result of a magical compact he thought he had evaded. So he must leave his settled life and become a brigand, in the hope of finding, on one of the magicians or priests he robs on the road, the one item of magical apparatus that can return his human shape.

Or they might not come together. I have numerous notes for stories, and many partly begun stories, that have progressed no further. Some of these fragments might be used in my novels, or at least be the seeds of some elements in one. A few ideas will progress and grow and become stories, complete in themselves. The great majority of my jotted-down ideas, images, and scraps of writing will never become anything more than a few lines in a black-and-red notebook.

The stories in this collection are the ones that got past the notes stage, that became a few paragraphs, then a few pages, and somehow charged on downhill to become complete. They represent a kind of core sample taken through more than fifteen years of writing, from the callow author of twenty-five who wrote ‘Down to the Scum Quarter’ to the possibly more polished forty-one-year-old writer of ‘Nicholas Sayre and the Creature in the Case.’

Fortunately, you have been spared some even earlier efforts, including the heavily T. H. White– influenced short story I published in my school magazine at fifteen, and even my very first professional short story sale, which felt like a great triumph for me at nineteen years old but now looks rather out of place with my later works.

I hope you find some stories here that you will enjoy, or wonder about, or that linger uncomfortably in the mind when you wish they didn’t. But if your favorite story is ‘The Coin Shower,’ please do not write and tell me that my writing has been going downhill ever since I was six.