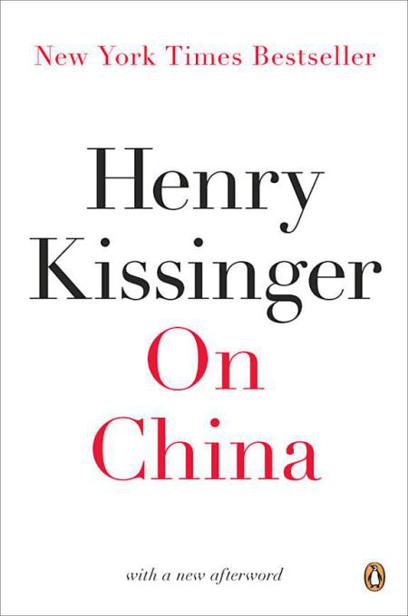 Table of Contents
Title Page
Copyright Page
Dedication
Preface
CHAPTER 1 - The Singularity of China
CHAPTER 2 - The Kowtow Question and the Opium War
CHAPTER 3 - From Preeminence to Decline
CHAPTER 4 - Mao’s Continuous Revolution
CHAPTER 5 - Triangular Diplomacy and the Korean War
CHAPTER 6 - China Confronts Both Superpowers
CHAPTER 7 - A Decade of Crises
CHAPTER 8 - The Road to Reconciliation
CHAPTER 9 - Resumption of Relations: First Encounters with Mao and Zhou
CHAPTER 10 - The Quasi-Alliance: Conversations with Mao
CHAPTER 11 - The End of the Mao Era
CHAPTER 12 - The Indestructible Deng
CHAPTER 13 - “Touching the Tiger’s Buttocks” The Third Vietnam War
CHAPTER 14 - Reagan and the Advent of Normalcy
CHAPTER 15 - Tiananmen
CHAPTER 16 - What Kind of Reform? Deng’s Southern Tour
CHAPTER 17 - A Roller Coaster Ride Toward Another Reconciliation The Jiang ...
CHAPTER 18 - The New Millennium
EPILOGUE
Notes
Index
ALSO BY HENRY KISSINGER
A World Restored: Metternich, Castlereagh,
and the Problems of Peace: 1812–22
Nuclear Weapons and Foreign Policy
The Necessity for Choice: Prospects of American Foreign Policy
The Troubled Partnership: A Reappraisal of the Atlantic Alliance
American Foreign Policy
White House Years
Years of Upheaval
Diplomacy
Years of Renewal
Does America Need a Foreign Policy?
Toward a Diplomacy for the 21st Century
Ending the Vietnam War: A History of America’s Involvement in and Extrication from the Vietnam War
Crisis: The Anatomy of Two Major Foreign Policy Crises
THE PENGUIN PRESS
Published by the Penguin Group • Penguin Group (USA) Inc., 375 Hudson Street, New York, New York 10014, U.S.A. • Penguin Group (Canada), 90 Eglinton Avenue East, Suite 700, Toronto, Ontario, Canada M4P 2Y3 (a division of Pearson Penguin Canada Inc.) • Penguin Books Ltd, 80 Strand, London WC2R 0RL, England • Penguin Ireland, 25 St. Stephen’s Green, Dublin 2, Ireland (a division of Penguin Books Ltd) • Penguin Books Australia Ltd, 250 Camberwell Road, Camberwell, Victoria 3124, Australia (a division of Pearson Australia Group Pty Ltd) • Penguin Books India Pvt Ltd, 11 Community Centre, Panchsheel Park, New Delhi—110 017, India • Penguin Group (NZ), 67 Apollo Drive, Rosedale, Auckland 0632, New Zealand (a division of Pearson New Zealand Ltd) • Penguin Books (South Africa) (Pty) Ltd, 24 Sturdee Avenue, Rosebank, Johannesburg 2196, South Africa
Penguin Books Ltd, Registered Offices: 80 Strand, London WC2R 0RL, England
First published in 2011 by The Penguin Press, a member of Penguin Group (USA) Inc.
Copyright © Henry A. Kissinger, 2011 All rights reserved
Excerpts from “Making of Plans,” “Strategic Offensive,” and “Attack by Fire” from
The Art of War
by Sun-Tzu, translated by John Minford. Copyright © John Minford, 2002. Used by permission of Viking Penguin, a member of Penguin Group (USA) Inc.
Library of Congress Cataloging-in-Publication Data
Kissinger, Henry, 1923–
On China / Henry Kissinger.
p. cm.
Includes bibliographical references and index.
eISBN : 978-1-101-44535-8
1. China—Foreign relations—20th century. 2. China—Foreign relations—21st century.
3. World politics—21st century. I. Title.
DS775.8. K47 2011
327.51—dc22
2011009265
MAP BY JEFFREY L. WARD
While the author has made every effort to provide accurate telephone numbers and Internet addresses at the time of publication, neither the publisher nor the author assumes any responsibility for errors, or for changes that occur after publication. Further, publisher does not have any control over and does not assume any responsibility for author or third-party Web sites or their content.
Without limiting the rights under copyright reserved above, no part of this publication may be reproduced, stored in or introduced into a retrieval system, or transmitted, in any form or by any means (electronic, mechanical, photocopying, recording, or otherwise), without the prior written permission of both the copyright owner and the above publisher of this book.
The scanning, uploading, and distribution of this book via the Internet or via any other means without the permission of the publisher is illegal and punishable by law. Please purchase only authorized electronic editions and do not participate in or encourage electronic piracy of copyrightable materials. Your support of the author’s rights is appreciated.

TO ANNETTE AND OSCAR DE LA RENTA
CHINA AND ITS NEIGHBORS

Preface
F
ORTY YEARS AGO almost to the day, President Richard Nixon did me the honor of sending me to Beijing to reestablish contact with a country central to the history of Asia with which America had had no high-level contact for over twenty years. The American motive for the opening was to put before our people a vision of peace transcending the travail of the Vietnam War and the ominous vistas of the Cold War. China, though technically an ally of the Soviet Union, was in quest of maneuvering room to resist a threatened attack from Moscow.
In the interval I have been to China more than fifty times. Like many visitors over the centuries, I have come to admire the Chinese people, their endurance, their subtlety, their family sense, and the culture they represent. At the same time, all my life I have reflected on the building of peace, largely from an American perspective. I have had the good luck of being able to pursue these two strands of thinking simultaneously as a senior official, as a carrier of messages, and as a scholar.
This book is an effort, based in part on conversations with Chinese leaders, to explain the conceptual way the Chinese think about problems of peace and war and international order, and its relationship to the more pragmatic, case-by-case American approach. Different histories and cultures produce occasionally divergent conclusions. I do not always agree with the Chinese perspective, nor will every reader. But it is necessary to understand it, since China will play such a big role in the world that is emerging in the twenty-first century.
Since my first visit, China has become an economic superpower and a major factor in shaping the global political order. The United States has prevailed in the Cold War. The relationship between China and the United States has become a central element in the quest for world peace and global well-being.
Eight American presidents and four generations of Chinese leaders have managed this delicate relationship in an astonishingly consistent manner, considering the difference in starting points. Both sides have refused to permit historic legacies or different conceptions of domestic order to interrupt their essentially cooperative relationship.
It has been a complex journey, for both societies believe they represent unique values. American exceptionalism is missionary. It holds that the United States has an obligation to spread its values to every part of the world. China’s exceptionalism is cultural. China does not proselytize; it does not claim that its contemporary institutions are relevant outside China. But it is the heir of the Middle Kingdom tradition, which formally graded all other states as various levels of tributaries based on their approximation to Chinese cultural and political forms; in other words, a kind of cultural universality.
A primary focus of this book is the interaction between Chinese and American leaders since the People’s Republic of China was founded in 1949. Both in and out of government, I have kept records of my conversations with four generations of Chinese leaders and have drawn on them as a primary source in writing this book.
This book could not have been written without the dedicated and able assistance of associates and of friends who permitted me to impose on them for help.
Schuyler Schouten was indispensable. He came to my attention eight years ago when Professor John Gaddis of Yale recommended him as one of his ablest students. When I started this project I asked him to take a two-month leave from his law firm. He did so, and in the process became so involved that he saw the effort through to its end a year later. Schuyler undertook much of the basic research. He helped with the translation of Chinese texts and even more with penetrating the implications of some of the subtler ones. He was indefatigable during the editing and proofreading phase. I have never had a better research associate and very rarely one as good.
It has been my good fortune to have Stephanie Junger-Moat work with me for a decade across the gamut of my activities. She was what in baseball they would call the essential utility player. She did research and some editing, and was the principal liaison with the publisher. She checked all the endnotes. She helped coordinate the typing and never hesitated to pitch in when deadlines approached. Her crucial contribution was reinforced by her charm and diplomatic skill.
Harry Evans edited
White House Years
thirty years ago. He permitted me to impose on our friendship to go over the entire manuscript. His editorial and structural suggestions were numerous and wise.