Read On Monsters: An Unnatural History of Our Worst Fears Online

On Monsters: An Unnatural History of Our Worst Fears 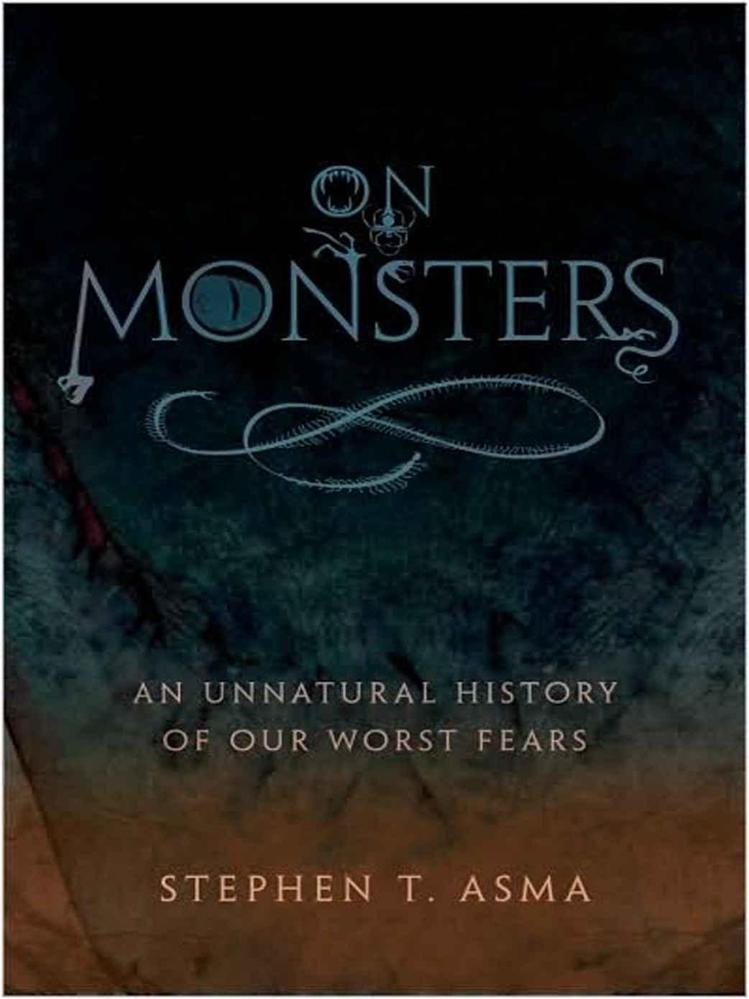 AN UNNATURAL HISTORY OF OUR WORST FEARS

For my favorite little monster, Julien—
cast from no mold, spinning out of control, and beautiful
.

6   Do Monsters Have Souls?

“I Have Known Much Peril”
•
Tolkien’s Tragic Beowulf

PART 3  —  SCIENTIFIC MONSTERS: THE BOOK OF NATURE IS
RIDDLED WITH TYPOS

10   The Medicalization of Monsters

Monsters and Transmutation
•
No Monstrous Jumps in Nature
•
Mutationism and Hopeful Monsters
•
Alberch, Gould,
and the Return of the Monsters
•
Evo-Devo

12   The Art of Human Vulnerability: Angst and Horror

14   Torturers, Terrorists, and Zombies:
The Products of Monstrous Societies

Mutants and Robots
•
Cyborgs
•
Disembodied Minds
Playing God: Biotechnology
•
Are Monsters in the Eye of the Beholder?

W
INSTON CHURCHILL ONCE
said that “writing a book is an adventure. To begin with, it is a toy and an amusement; then it becomes a mistress, and then it becomes a master, and then a tyrant. The last phase is that just as you are about to be reconciled to your servitude, you kill the monster, and fling him out to the public.”

I have written half a dozen books now, and I think Churchill has captured the process perfectly. I am happy to fling this monster out to the public. But I’m proud of it, and I’ll probably miss my long servitude to it. Of course no monster gets built alone; even Dr. Frankenstein had Igor’s help (at least in the movies). At the risk of offending my friends and family by associating them with a hunchbacked imbecile, I wish to thank my many collaborators.

My family is a team of tireless supporters. Heartfelt thanks go to my parents, Ed and Carol, and brothers, Dave and Dan, plus the entire Asma tribe. My dearest Wen and Julien waited patiently for Baba to climb out of the laboratory; I am grateful for their patience and their help with the voltage generators, test tubes, and that one time when we had to beat back the torch-wielding villagers.

Anatomy was frowned upon in the eighteenth century, and the body snatchers who dug up cadavers for secret scientific study were known as “resurrection men.” My resurrection men were Bob Long and Roland Hansen, both of whom exhumed obscure texts and sources. A writer could not ask for better research assistants. Lauren Dubeau and Loni Diep helped me find many wonderful images of monsters. Joanna Ebenstein, David Driesbach, and Peter Olson very generously contributed their own excellent artwork to the book.

I am grateful to Steve Kapelke, provost of Columbia College, for having the vision to create a “distinguished scholar” rank and for having the lapse of good judgment to name me as one. Complicit in this happy gaffe were my chair, Lisa Brock, and Deans Cheryl Johnson-Odim and Deborah Holdstein. I’m thankful to many other friends at Columbia College, including Sara Livingston, Garnet Kilberg Cohen, Kate Hamerton, Teresa Prados-Torreira, Micki Leventhal, Keith Cleveland, Oscar Valdez, Krista Macewko, Jeff Abel, and drinking partner Baheej Khleif.

This book and my intellectual life would be much poorer if it wasn’t for my small and voracious reading group, Tom Greif and Rami Gabriel. Many thanks to them for reading large chunks of this book, but also for weekly torture sessions with obscure philosophers, evolutionary psychologists, cognitive scientists, revolutionaries, and more.

What a chimera, then, is man! What a novelty, what a monster, what a chaos, what a subject of contradiction, what a prodigy! A judge of all things, feeble worm of the earth, depositary of the truth, cloaca of uncertainty and error, the glory and the shame.
BLAISE PASCAL

I consider it useless and tedious to represent what exists, because nothing that exists satisfies me. Nature is ugly, and I prefer the monsters of my fancy to what is positively trivial.
CHARLES BAUDELAIRE

I have never seen a greater monster or miracle than myself.
MICHEL DE MONTAIGNE

E
VER SINCE I WAS A SMALL BOY
I’ve had a phobia about deep murky water, or more accurately, a fear of what might be living in such waters. A seemingly harmless swim in a weedy lake sends my imagination into overdrive and I can almost see the behemoths and leviathans rising up to gnaw off my extremities. I’m a grown man, for God’s sake, and a skeptic as well. But no amount of reasoning with myself can begin to dispel the apprehension. I’ve never ruined a beach picnic by refusing to get in the water, nor have I needed to be talked down from an anxiety attack. Like most other “lite” phobics I just cringe a little bit and get on with the swimming. I’m annoyed by my irrational fear of sea monsters, but I’ve resigned myself to coping with it.

When I was living in Cambodia I occasionally went swimming in the muddy Mekong, but I winced at the idea that more species of giant fish live in the Mekong than in any other river in the world. Mekong catfish can grow to be eight or nine feet long and weigh between six hundred and seven hundred pounds, and goliath freshwater stingrays can be over twelve hundred pounds. Moving geographically to the deep seas of the Atlantic and the Mediterranean, one finds an enormously long silvery snake-like beast called an oarfish. This nightmarish fish lives at depths of three thousand feet and has been seen and captured only after rare surfacing episodes due to illness. This ribbon-like giant, with striking red-headed “plumage,” can grow up to fifty feet in length and probably inspired many early sailor
tales of sea monsters. Add to this sort of oddity the fact that every once in a while science dredges up some hitherto unknown specimen from the deep, such as the ancient coelacanth or rare evidence of the giant squid.
1
I can almost hear my reptilian brain telling my neocortex, “See, I told you! Don’t go in the water.” But these real monsters are nothing compared to the nefarious beasts that swim in my head. These are modified versions of the real creatures, but always with sharper and more copious dentition, more poisonous dorsal spikes, and more razor-like claws for effortless laceration. And of course they’re bigger too.