Read On the Plus Side Online

On the Plus Side 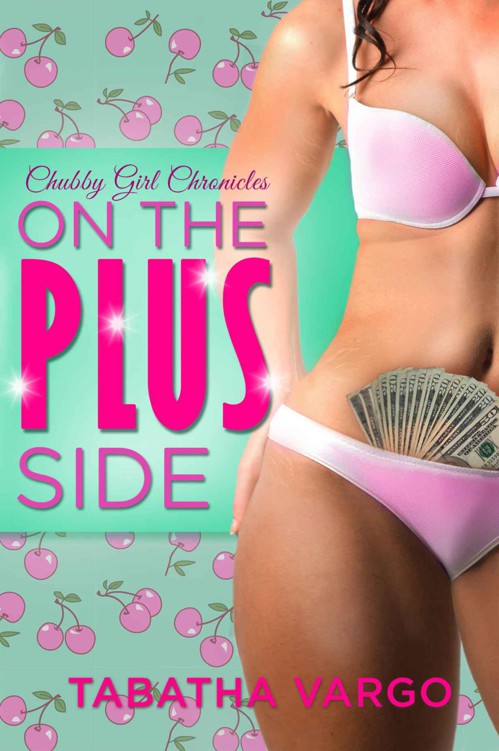 On the
Plus Side

On the Plus Side

All Rights Reserved.
Printed in the United States of America.

No part of this book may be used or reproduced in any manor whatsoever without written permission except in the case of brief quotations embodied in critical articles and reviews.

This book is a work of fiction. Any references to historical events or real people are used fictitiously. Other names, characters, and incidents are products of the author’s imagination, and any resemblance to actual events or persons, living or dead, is entirely coincidental.

On the Plus Side/ Tabatha
Vargo

Cover Art by Regina Wamba/ Mae I Design and Photography

For Matthew, thank you for making me feel beautiful everyday for the last eleven years…even when I’m wearing the poodle puff and ugly sleep pants. I love you mostest!

“But, Dev, he hit me first… kind of,” Jenny said as she handed me a socket wrench. I was under the car, of course. Under the hood of a vehicle was my second home.

“It’s not my fault he didn’t protect his balls. You
always
protect your balls. Even I know that, and I’m a chick.” She bit her nails as she talked. I could tell by her muffled voice.

“That’s debatable. Me and Dad aren’t so sure anymore,” I chuckled as she kicked my booted foot that stuck out from under the car.  “Also, could you please
not
talk about balls with me? I’m pretty sure there’s like a rule about little sisters saying the word balls anywhere in the vicinity of their brother. If there isn’t, let’s just go ahead and put that rule on the books.” I released the old oil from the engine.

It splattered up from the oil pan and landed on my grease-covered shirt. I pulled the rag from my back pocket and wiped my hands so that I could get a better grip on the ratchet.

“I’m assuming the new rule applies to the word cock, too?” she laughed.

“Yes!” I said a little too loudly. “
That
word is strictly forbidden.”

“Don’t be a little bitch, Dev,” she said as she slipped a new oil filter under the car to me.

“Watch your damn mouth, Jenny. Could you at least attempt to be a lady? Ladies don’t kick boys in their balls because they win a game of Halo. I’d be pissed if I was him, too. You need to call him and apologize. Josh has been your best friend too long—don’t let a stupid game ruin that.”

“First of all, he did
not
win and B, I was raised by two dudes. I’m pretty sure the lady train left the station when I was nine.” She popped open a can of soda and sighed. “Whatever, I guess I’ll run him over some gummy worms later and say sorry. He’s such a baby. It’s just balls. He smacked me in the boob once and you didn’t hear me bitchin’ and moanin’,” she said as she left the garage and headed toward the back door of the house.

“You said balls again!” I yelled from under the car.

I couldn’t hear her response over the loud smack of the screened door.

I finished up the oil change then worked on a dent that I acquired at the grocery store. Poor Lucy, my sixty-nine Chevy
Camaro, didn’t stand a chance against the wayward grocery cart.

She was a gift from my dad. When I got her she was just a big heap of junk, wouldn’t even crank.  My dad isn’t one for gifts, but being a mechanic has its perks every now and again. When a customer couldn’t pay for the new transmission my dad dropped in his truck, a trade for the cash was offered and I got Lucy. To me, she’s worth every minute we put into that man’s piece-of-shit truck. Dad might not agree with me on that, but what can I say, I got the better part of that deal.

Lucy’s the epitome of beauty. You can’t buy the kind of character that an old muscle car has these days and Lucy had character. I’d rather be out there secluded in the garage with her, than any other place in the world. I’d spent hours overhauling my car and I’d spend every dime on the project, if I had a dime.

At my age, I should have a steady woman in my life, but cars are better than women. They’re gorgeous, powerful, and they purr when you handle them. They do all that without the mandatory attachment that women require.

“Devin! Are you gonna stay in that garage under that car all day? I need ya to come in for a minute, boy!” Dad yelled from the back door of the house.

“I’m
comin’!” I hollered back. “Is this man ever gonna give me a break?” I sighed to myself.

It wouldn’t be so bad if I actually made some money working in the shop with Dad. Since I make such a crappy paycheck, the least he could do is give me five minutes to dwell on my less-than-stellar life.  Instead, he pushes me harder and harder every day. You’d think he’d appreciate the fact that I haven’t ran off and left him high and dry, but oh no…not Harold Michaels, a.k.a., the town drunk.

If my dad could fix a car as fast as he could take out a six pack of beer, I swear we’d be rich. Even drunk as a skunk the man knows his way around an engine. That fact kept the people in our small town from caring that he did business with Budweiser on his breath.  One of the plus sides of living in a town full of truck owners is the fact that once the good ole boys found a good mechanic, they stuck with him. Who cares that he couldn’t stand up straight or speak without a slur as long as the job got done right?

That was the biggest reason our small father-and-son shop stayed afloat. The other reason, of course, was because I’m a Whiz at the books. Last year alone, I saved dad three grand in taxes. I should’ve stayed in school, and then maybe I could’ve gone somewhere else in this world.

Instead, here I was, twenty-two years old, stuck with Renee, a wannabe girlfriend, who drove me nuts, and a father who was a slave driver. Let’s not forget my fifteen-year-old sister, Jenny, who should’ve been a boy. I guess things could’ve been worse; I could be all alone in this big bad world.

I pulled myself out from under Lucy and stood there for a minute before running out of the garage and across the yard to the house.

The screened door snapped back making a loud slamming noise when I walked in. Dad was sitting at the kitchen table sorting through a massive stack of bills. He shook his head in disgust.  For as much business as we made here at our little shop, it never seemed to be enough. We barely kept our heads above water.

The last couple of months had been the worst we’d had in a long while though. A new mechanic shop just opened on the outskirts of town. Even though I knew all the customers would come back once the new place got old, I couldn’t help but worry about us until then.

It happened in our line of business. Some new shop with bright paint and fresh tools would pop up and stay open just long enough to make us financially uncomfortable. Another advantage to living in a small town…people don’t like change. They always came back to what they knew, and the people in Walterboro knew my dad.

“What’s up, Pops?” I said as I tapped the top on a cold Mountain Dew.

“Son, we got ourselves a bit of a problem. It seems we’re a little behind on some loans. We gotta come up with some cash, fast.”

“OK. Which loans are we talking about and how much?” I pinched my lips together like a disappointed mom.

I knew exactly which loans we were talking about, or should I say which loan. The loan we were talking about was the loan on the house and the garage. Back before I started taking care of the books for dad, he’d gotten so deep in debt with the I.R.S he actually had to take a loan out on anything he had of value. From the look on his face, I could tell the amount was going to chap my ass.

“What’s the damage and what can we do?” I said impatiently.

“Well, it’s along the lines of eight grand and there’s nothin’ comin’ to mind. You got any ideas?”

Eight thousand dollars! I switched out my Mountain Dew for a beer.

“The final notice says ninety days. I don’t see how we can come up with eight grand by then. I just hope
somethin’ comes up.”

It pissed me off that he kept saying “me” and “us” like I had something to do with it. He was the one who let it get this bad. He was the one than needed to go back to school and learn basic math, not me!

I stared back at Dad for a minute and let the last few sentences he uttered fill my brain and make sense.

“Dad, I’m
gonna take a drive and try to figure some stuff out. You want me you grab anything while I’m out?

“No, don’t be gone long, though. Morgan’s
bringin’ over that ford that’s been tickin’. I want you to look it over for me,” I heard him say as I walked back out the door—the screen door snapped back and made an even louder banging noise.

All the work I put into this stupid shop trying to save it, and all the time I spared in the garage with him, were a waste. I could have a real job somewhere far from here. I could have my own place and take care of myself. I’ve always been a hard worker and I’ve always hated the fact that I was stuck here going nowhere fast.

I’ve been working in Dad’s garage ever since I was twelve or so. I used to come home from school, eat a peanut butter and jelly sandwich, and then head straight out back where I’d spend the rest of my night under the hood of something. That was back when mom was still around. She left when Jenny was six.

The year I turned thirteen was the hardest year of my life. Not only was I officially a teenager dealing with all the new hormones and growth spurts, but my mom left me like I was nothing.  You’d think she would have at least stuck around to see Jenny grow up. What kind of woman leaves a six-year-old girl behind with two males? Leaving me with dad could almost be excused, but a young girl needs a mom to teach her girly stuff.

My mom was a beauty and apparently, every man in town thought so. I can remember the nights my mom and dad would argue. I always wondered why he would let her run around on him like she did. If I knew as a boy what was going on, then you know everyone in town knew. My dad must’ve looked like a dumbass.

There were some happy times when they were together, but most days I’d sit back and watch as dad tried everything to make her happy. The day she left she didn’t even say goodbye to me and Jenny. I could hear dad begging her to stay and telling her how much he loved her.