Read Once a Bride Online 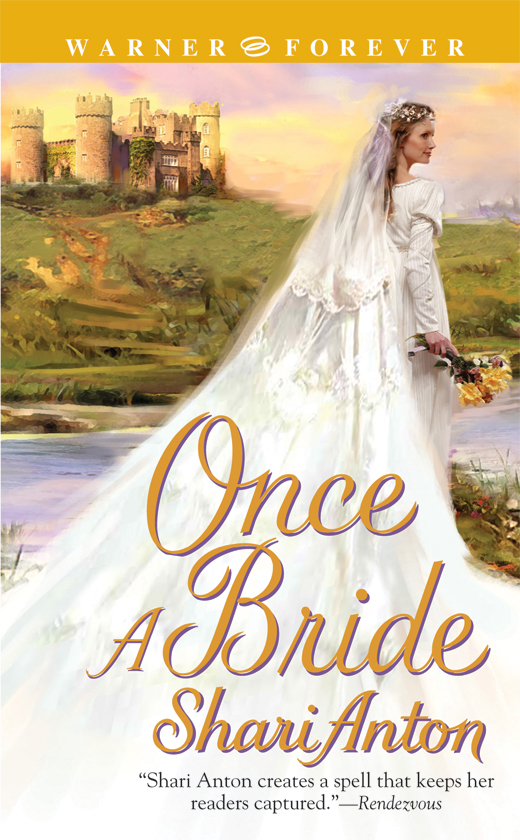 Excerpt from
At Her Service
copyright © 2004 by Sharon Antoniewicz All rights reserved. No part of this book may be reproduced in any form or by any electronic or mechanical means, including information storage and retrieval systems, without permission in writing from the publisher, except by a reviewer who may quote brief passages in a review.

Warner Forever is a registered trademark of Warner Books

A Preview Of At Her Service

ONE OF THEM SHOULD PULL AWAY, END THIS MOST IMPROPER ENCOUNTER.

His hand cupped her cheek as a battle played out on his rugged features. “You tempt me beyond reason, woman.”

“No more than you tempt me.”

His forehead pressed against hers, and his breath felt warm on her face. “Have you ever been kissed, Eloise?”

His mouth slid over hers then, gentle and moist, making her head go light. With eyes closed, she rushed headlong into unfamiliar territory and reveled in the sensations that both frightened and thrilled her.

She’d lied to him. She’d never been kissed, not like this.

“Anton handles history with a deft hand, even as she spins a tale that will capture the reader’s heart.”

A
LSO BY
S
HARI
A
NTON

To Ross and Ruth Foley who are courageously giving love a second chance. Here’s a toast to your success!

An author is part of a team. Mine is excellent.

My agent, Pamela Hopkins, who has never lost faith in me.

My editor, Karen Kosztolnyik, who challenges me to write the best story possible.

And you, the readers, whom we all strive to please.

My sincerest thanks to all of you!

T
HE SUMMONS was delivered by a nervous squire in Sir John Hamelin’s pointed manner. Father wished to see her in his accounting room
now.

Eloise Hamelin’s boot heels clicked briskly over the passageway’s plank floor, confident she could defend each of her recent purchases.

Maintaining a castle as huge and well manned as Lelleford required certain purchases. Eloise spared her father the task of buying mundane items, like spices and kegs of ale, sacks of various grains, barrels of salted fish—staples of the winter food supply—and other necessities. For her trouble he didn’t begrudge her the occasional trinket.

Yesterday, merchants from all over England had attended the yearly village fair, making their goods readily available for her inspection and she’d taken full advantage. Her trinket consisted of several ells of utterly lovely, finely woven wool, a purchase that she’d deemed vital, and likely the reason for this morning’s abrupt summons.

Most of the wool would be sewn into winter tunics for her father. Even under ordinary circumstances she would be remiss to send the lord of Lelleford back to Westminster—to enjoy the grand festivities of the king’s Christmas court—garbed in less than elegant fashion.

The remaining wool was for her own gowns, suitably styled and elegantly trimmed. She hadn’t yet told her father of her desire to accompany him to court, waiting for the right moment to make her request without risking outright denial.

He simply
must
let her accompany him.

Eloise didn’t doubt Father intended to contract another betrothal for her while at court. What better time to negotiate a marriage bargain than while mingling among the highborn men of the kingdom? ’Twas her destiny to marry well, and she accepted the duty.

Except this time she wanted a look at her intended husband first, to ensure him healthy and strong—unlike Hugh St. Marten, who’d fallen dead at her feet on the church steps before he could utter his marriage vows.

The horror had left her numb for days. Even now, two months later, the sorrow over Hugh’s death lingered. She’d not known him well, but he’d been too likable a man not to feel saddened that one so young should die so suddenly and ignobly.

People tried not to remind her of Hugh’s death, but occasionally she’d see pity in their eyes and hear them mutter “poor Lady Eloise” when they thought she didn’t hear, and she abhorred being pitied.

She paused outside the accounting room’s door. With a flight of hands over her emerald velvet gown and a quick tuck of a rebellious strand of long hair back into her braid, she ensured her appearance without fault.

Her father’s voice held a sharp edge, even though muffled through the door. Perhaps this wasn’t the right time to make her request.

She heard the bolt slide. The door flew open into a small chamber that smelled of crisp parchment, pungent ink, and beeswax candles. Before she could blink, he pulled her into the chamber.

Eloise gasped at the carnage, unable to comprehend why parchment scrolls littered the dark oak desk, or why an overturned bottle dripped indigo ink onto the brown robe of unconscious Brother Walter, who sprawled face-down beside the desk.

Ye, gods! Was the monk dead? Nay. The young cleric breathed, though shallowly. Her hand trembled as she bent toward the bloody gash at his temple.

The door slammed, making her flinch.

Too confused to do aught else, Eloise withdrew at her father’s sharp command. Fury darkened his dove gray eyes to pewter, a near match to his thinning hair. Never before had she seen his barrel chest heave so rapidly, nor felt so fragile in his imposing shadow.

Desperate to make sense of the senseless, she ventured to ask, “What happened?”

He waved a meaty hand at the monk recently retained as his clerk. “Yon dolt proved unworthy of my trust. You can do what you will with him after I am gone.”

He strode toward the desk and shoved several scrolls into a black leather pouch.

“Best you do not know of my whereabouts.” He glared at Brother Walter. “I have been declared a rebel, Eloise. Even now the earl of Kenworth comes to make the arrest.”

Stunned, she could only stare at her father. Surely there must be some mistake, but for the life of her she knew not where to place the blame.

He closed the flap on the pouch. “Show Kenworth no resistance. Allow him through the gate. Give him free roam of the castle. Feed him. Serve him our finest wine. By all the saints, give him no reason to seize Lelleford by force!”

Eloise snapped out of her stupor.

“Dear God, Father, what precisely have you been accused of?”

Her stomach roiled, her knees nearly buckled. A conviction on such a high crime demanded gruesome punishment. Hanged, drawn and quartered.

From a trunk in the corner he hefted a gold chest encrusted with rubies and set it on the desk. From the coffin he scooped two handfuls of coins into his money purse, then pulled the string taut.

“Sew some coins into the hems of your gowns and cloaks in the unlikely event you are forced to abandon Lelleford. By the grace of God, perhaps Julius is on his way home and can take charge on his return.”

Julius, her eldest brother, had gone to Italy on pilgrimage. Useless to wish he’d walk through the door
now.

“Father, there must be some way to resolve—”

“There is, but not with the earl of Kenworth. He and I have been at odds for too long. Do not send to Jeanne or Geoffrey for aid. There is naught either can do to assist me and the fewer of my children involved the better.” He snapped up the leather pouch bulging with scrolls. “I will take Edgar with me. He should be readying horses.”

Eloise now understood the squire’s nervousness when he delivered her father’s summons. Edgar must have witnessed whatever had occurred between John Hamelin and Brother Walter, possibly knew how the monk had been injured.

“What of Brother Walter?”

“The wretch will live. ’Tis probably best not to restrain him. All you need do is feign ignorance of my affairs and all should be well.”

She’d never felt more ignorant or frightened in her entire ten and seven years. Panic battled with anger over his abandoning her to this perilous predicament.

Eloise wanted him to stay, but if he didn’t go, he could very well be hanged in his own bailey with his own rope.

A lump formed in her throat, tears welled in her eyes. Damn. Now was no time for sentiment. Sir John Hamelin, a knight of the realm, a heretofore trusted advisor to the king, would find a way to dispute the charge and avoid hanging.

’Twas on her part in this calamity she must concentrate, fulfill her duty.

“Do you know when the earl will arrive?”

Only a few hours away. Not enough time to prepare, but all the time given her.

“You had best hurry, then.”

“I shall send word when I deem it safe. Do as I have told you and all will be well. I place great trust in you, Eloise. Do not fail me.”

He tilted his head; his expression softened. “Nay. Of all my children only you have shown unfailing loyalty. Have a care, Daughter.”

Eloise knew her father disliked overt shows of affection, didn’t often reveal his softer side, and she would never do anything to embarrass him. But they were alone, and she might not see him for a very long while. She wrapped her arms around his barrel chest and squeezed hard.

Even before his arms came around her and pulled her in tight she could hear his heart thud rapidly.

“Do not despair, Eloise,” he whispered into her hair. “All will come out right in the end.”

He flipped up the latch and slowly opened the door, peering up and then down the passageway before he strode out.

Eloise leaned against the desk and took several deep breaths. She lacked time for either outrage or self-pity. What to do first?

Brother Walter sprawled on the floor, unconscious, the blood on his temple drying dark and garish against his pale skin. An untrustworthy man according to her father. The monk deserved whatever misfortune befell him for whatever part he’d played in her father’s downfall.

Nay, not downfall. Merely a misunderstanding her father must put to rights. Treason? Unthinkable! Too often Father praised young King Edward’s policies, and been effusive over Edward’s military prowess. ’Twas against all sense for her father to betray the young sovereign he admired.

Do nothing. Feign ignorance.

Sweet mercy, did Father know what he asked of her?

Likely, because he’d seen fit to issue pointed instructions for her behavior.

The churl didn’t deserve any show of concern, but show it she must if he were to believe she’d simply come upon him, found him wounded—didn’t know he’d somehow betrayed her father.

She knelt and put a hand to his shoulder. “Brother Walter, can you hear me? Can you awaken?”

“Do not try to speak yet. You must have tripped and hit your head on the desk. Can you sit up?”

He braced on an arm and eased upright, shaking his head as if settling his brain into its rightful place.

Once he seemed balanced, Eloise moved away from the monk she’d dearly love to toss in the dungeon.

Brother Walter glanced around the room. Looking for Father?

She righted the ink bottle. “Tsk. Such a mess you made. I daresay Father will not be pleased if he sees his possessions in such disarray. But come, I will take you down to the hall and tend your injury before we attempt to tidy the room.”

A Taste for Scandal by Erin Knightley
Journalstone's 2010 Warped Words for Twisted Minds by Compiled by Christopher C. Payne
Perfect Sins by Jo Bannister
Jumped by Rita Williams-Garcia
Wars of the Roses: Bloodline: Book 3 (The Wars of the Roses) by Conn Iggulden
Ship Captain's Daughter by Ann Michler Lewis
Death of a Nobody by J M Gregson
Aria by Shira Anthony
There is a Land (A Libète Limyè Mystery) by Ted Oswald
Sinful Liaisons by Samantha Holt