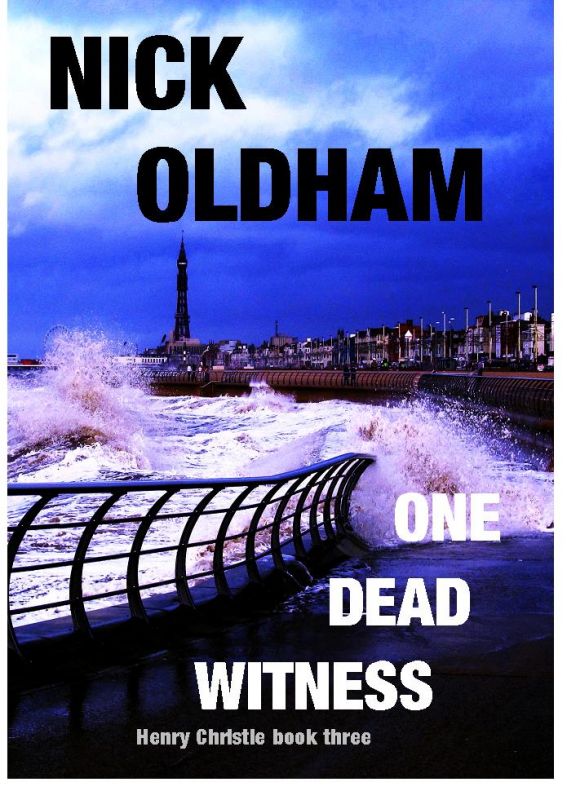 Published by Nick Oldham at Smashwords

This ebook is licensed for your personal enjoyment only. This
ebook may not be re-sold or given away to other people. If you
would like to share this book with another person, please purchase
an additional copy for each recipient. If you’re reading this book
and did not purchase it, or it was purchased for your use only,
then please return to Smashwords.com and purchase your own copy.
Thank you for respecting the hard work of this author.

This book is a work of fiction and any resemblance to persons,
living or dead, or places, events or locales is purely
coincidental. The characters are productions of the author’s
imagination and used fictitiously

Nick Oldham is the author of the ‘Henry Christie’ series of
crime novels set in the northwest of England. He was born in April
1956 in a house in the tiny village of Belthorn – mums were very
hardy in those days – up on the moors high above Blackburn,
Lancashire. After leaving college then spending a depressing year
in a bank, he joined Lancashire Constabulary at the age of nineteen
in 1975 and served in many operational postings around the county.
Most of his service was spent in uniform, but the final ten years
were spent as a trainer and a manager in police training. He
retired in 2005 at the rank of inspector.

He lives with his partner, Belinda, on the outskirts of
Preston.

ONE DEAD WITNESS is the third of Nick Oldham’s gritty, fast
paced, highly acclaimed and well reviewed thrillers set in the
northwest of England, featuring Henry Christie and is now available
for the first time in e-format.

For more information about Nick and his books visit
www.nickoldham.net
or ‘Nick
Oldham Books’ on Facebook
http://www.facebook.com/pages/Nick-Oldham-Books/134265683315905

Many thanks to John Drury and Steve Little, both consummate
police trainers, for sharing their knowledge of paedophiles with
me, and to Carol Woodcock for pointing me towards the
Internet.

Although certain passages in this novel may be disturbing to
some readers, the incidents and feelings portrayed are based on the
day-to-day realities with which police officers have to
deal

It’s difficult to have any sympathy for a prisoner like Louis
Trent – no matter how much the other inmates abuse him. For Trent
is a child-molester, one of the nastiest kind. Just how nasty, the
authorities and his tormentors are about to find out...

Not much is going right for DC Danielle Furness. Chasing
eleven–year-old runaway Claire Lilton along a wave-battered
Blackpool seafront is only the beginning. Tonight Danny must end
the affair with her married lover, which is bound to make life
difficult at work. Serves her right for sleeping with the
boss.

But Danny’s personal problems pale into insignificance when
Louis Trent explodes out of jail. Now Trent is heading for his old
haunt, Blackpool, with murder on his mind – for the young girls he
preys on, like Claire, and for the woman who put him in prison in
the first place: DC Danny Furness...

‘Oldham takes the taut pacing, gripping suspense, and
hard-edged plotting that readers have to expect from the best
British procedurals and adds a fresh twist. A touch of James Ellroy
thrown into a John Harvey-style procedural makes a powerful
combination’ –
Booklist.

‘The genuine article - a tale from the cutting edge of law
enforcement that is utterly authentic. I think this new author is a
real find’ –
Mystery and Thriller
Guild

‘Every detail in this gripping, fast-paced story has the ring
of truth’ –
Bradford Telegraph and
Argus

‘Like everything ‘good’ in life, a fast-paced, old fashioned
shoot ‘em up is hard to find. Fortunately we have Oldham’s latest
novel to remind us what it’s all about’ –
Publisher’s Weekly

Also by Nick Oldham in the ‘Henry Christie’ series:

A Time for Justice (available as an e-book on
Smashwords)

Nightmare City (available as an e-book on
Smashwords)

The Last Big Job (available as an e-book on
Smashwords)

Trent knew they were coming long before they
arrived.

He could smell it in the air - sense the unnatural quietness,
the electric tension which pervaded the prison.

They were coming for him.
Again.

Suddenly it was very hot.

His throat became dry and he swallowed with some difficulty. A
bead of sweat scuttled down his temple like some sort of insect,
leaving a glistening silvery trail in its wake. He closed his eyes
and gritted his teeth, willing himself to have the courage to face
up to what was about to happen.

He was laid out full-length on the lower bunk in his cell,
alone, his head propped up on the iron-hard pillows. He had been
reading one of his well-thumbed, tatty magazines called
13-Plus,
aimed at young
teenage girls. When he felt the atmosphere change, and his spine
tingled in response, he closed it, tossed it to one side and let it
flutter to the floor.

He lay there for several minutes, eyes staring upwards at the
empty bunk above him.

Then he heard the footsteps.

Distant at first ... rather like listening to a piece of music
and honing in on the bass line, separating it from the rest of the
instruments. The footsteps clattered more loudly as they mounted
the iron steps and reached the landing on which his cell was
situated.

He knew there would be four of them.

Three were always the same - the swaggering trio of tough guys
who ruled the whole prison between them with their violence and
intimidation. Then there would be a fourth one, the one who was
about to be treated, the one who was desperate, and had paid in
cash or dope or tobacco, whatever the acceptable currency happened
to be, to satisfy his pent-up frustrations and cravings.

So far it had been a different man every time. Trent had a
fairly good idea who it would be this time.

He considered screaming the place down. Then decided not to
bother. He had screamed the first few times. A waste of breath. His
squeals had gone unheeded, proving that everyone was in on it,
including the screws. . . as had been so painfully demonstrated on
the last occasion, some two weeks earlier, when the fourth member
of the party, the paying member, had been wearing a prison
officer’s uniform.

The steps were closer now.

He also considered putting up a fight.

He’d tried that before, too. Though he was a man of reasonable
stature, the three hard men had loved his resistance and risen to
the occasion. After they had overpowered him and held his squirming
body down to be abused by the fourth member, they had then beaten
him senseless. A cold-hearted, clinical assault which put Trent
into the casualty department of the local hospital overnight and
then into the poorly-equipped prison hospital to recover for four
days.

Trent swung his legs off the bunk and sat up.

The ominous sound of footfalls on the metallic landing grew
even nearer.

He swallowed once more, this time to keep the vomit down. He
attempted to regain control of his breathing and his shaking. Not a
chance.

He swore between gasps.

They were now only yards away.

On jittery legs he got to his feet. He groaned
pathetically.

Somewhere in the distance he could hear the laughter of men:
prisoners on association, playing cards, or table tennis, reading,
chatting, watching TV. All fully aware of what was about to take
place in cell number one-six on landing four. And not one of them
with the courage to make a stand because not one of them cared a
toss.

Trent was alone. No one would help him.

By the time the four men reached the door, Trent had
unfastened and unzipped his trousers. Anything to save time and get
the nightmare over with more quickly.

They barged into the tiny cell, their stench and presence
overpowering him, their size terrifying him.

Their leader - Trent’s main tormentor - was called Blake. His
mouth was crimped into a cruel smile as he regarded Trent with
contempt.

Trent glanced beyond Blake’s shoulder, past his two regular
accomplices, to the fourth man. He had been correct in his guess,
recalling the knowing looks the black man - a violent rapist whose
MO was to break into houses owned by single females and subject
them to brutal attacks - had been giving him for the last couple of
days during mealtimes.

‘
What’s it gonna be, Trent?’ Blake growled. He raised his
eyebrows questioningly, but his hard grey eyes glowered dangerously
as he spoke. ‘Wanna give us a hard time - or are you gonna grin an’
bear it like a good child molester should?’

In reply, Trent allowed his trousers to fall to his ankles. He
stepped out of them, hooked his thumbs into the waistband of his
grimy-grey underpants and shuffled them down his legs.

Seconds to Disaster: US Edition by Ray Ronan
Something blue by Charlotte Armstrong, Internet Archive
Broken by Megan Hart
Compulsion by Heidi Ayarbe
Highland Desire by Hildie McQueen
Forget Me Not (From the Files of Madison Finn, 21) by Dower, Laura
Hitch by John Russell Taylor
Icarus Unbound by Bernadette Gardner
KNOT: A Wake Family Novel by M Mabie
The Boat to Redemption by Su Tong