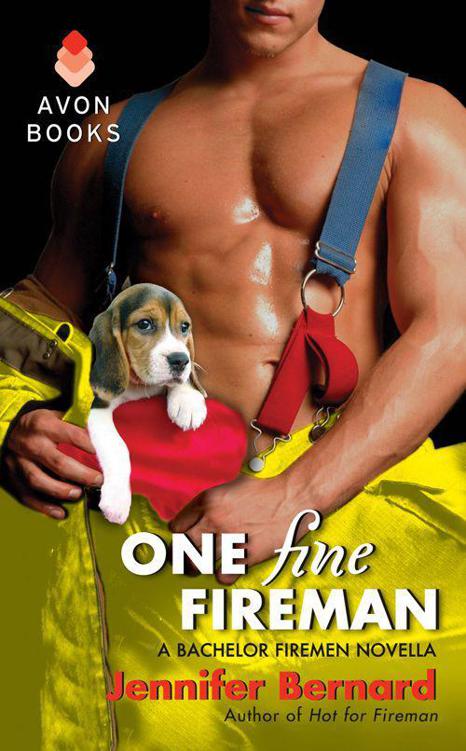 An Excerpt from
The Fireman Who Loved Me

An Excerpt from
Hot for Fireman

An Excerpt from
Sex and the Single Fireman

An Excerpt from
Three Schemes and a Scandal
by Maya Rodale

An Excerpt from
Skies of Steel
by Zoë Archer

An Excerpt from
To Hell and Back
by Juliana Stone

An Excerpt from
Midnight in Your Arms
by Morgan Kelly

An Excerpt from
Seduced by a Pirate
by Eloisa James

“H
ERE THEY COME!
Do we haf enough coffee?” Mrs. Gund called to Maribel from the Lazy Daisy grill, where she was managing twenty breakfast orders with the logistical skill of an air traffic controller.

“I’m on it!” Maribel shot a glance at the gleaming red fire engine that had just pulled up to the curb. She ran to the coffeepot and quickly filled a new filter. She ignored Mrs. Gund’s grumbles, which no doubt went along familiar lines. The Bachelor Firemen of San Gabriel often showed up at this time of day, they always wanted lots of coffee, and shouldn’t Maribel know all this by now?

Maribel left the coffeemaker and hurried to the opening between the grill and the counter.

“Two Lazy Morning Specials for table six.” Mrs. Gund, whose tight gray curls were tucked into a hairnet, did a double take. “Maribel, vat is that you are vearing today?”

Maribel looked down at her denim overalls. They were cute, right? In a retro kind of way? “What’s wrong with what I’m wearing?”

“We have da most attractive fellows in California about to valk in our door—hero firemen—and you dress like a farmer.”

“Do not talk to me about engaged. Vat is this engaged, ven your man never even visits?” Mrs. Gund’s stern face grew pink, as it always did when she warmed up to her second favorite topic, after Maribel’s occasional lack of focus.

“Duncan visits, Mrs. Gund. You know he does.” Maribel took hold of the two plates of Lazy Morning Specials, but her boss seemed reluctant to let them go. “And he wants to talk tonight. About something important. I’m sure it’s about setting the date.”

Of course, she wasn’t entirely sure; she was even less sure about how she felt about that prospect.

“I tell you, he’s not the man for you. How long have you vorked here,
elskling
?”

“Please. The eggs are getting cold.”

“Six years,” Maribel muttered, not liking to admit how long she’d been laboring at what wasn’t even close to her dream job.

“Six years I know you. Six years dat man keep you vaiting. Meanwhile, every day these vonderful men come in here and look at you with such puppy-dog eyes, it makes me want to cry.”

“You’re such a softy,” said Maribel, hiding a smile. Mrs. Gund, Norwegian to the core, didn’t believe in giving in to her emotions, even though she had the biggest heart in the world. “I’d better take these to table six. They keep looking at their watches.”

“Did you hear vat I said about the puppy-dog eyes?”

“I heard, but really, Mrs. Gund, I’ve never noticed anything like that. They just come in for their coffee like all the other customers.”

“You don’t notice? Of course you don’t notice! That man has stolen your brain! He’s—” Maribel yanked the plates from her grip and fled. Mrs. Gund was so silly on the topic of Duncan and her love life. The firemen didn’t give her any particular looks. They smiled at everyone. They were polite and friendly and sexy and gorgeous and . . .

The door opened and three firemen walked in. Maribel nearly dropped the Lazy Morning Specials in table xix’s laps. My goodness, they were like hand grenades of testosterone rolling in the door, sucking all the air out of the room. They wore dark blue T-shirts under their yellow firemen’s pants, thick suspenders holding up the trousers. They walked with rolling strides, probably because of their big boots. Individually they were handsome, but collectively they were devastating.

Maribel knew most of the San Gabriel firemen by name. The brown-haired one with eyes the color of a summer day was Ryan Blake. The big, bulky guy with the intimidating muscles was called Vader. She had no idea what his real name was, but apparently the nickname Vader came from the way he loved to make spooky voices with his breathing apparatus. The third one trailed behind the others, and she couldn’t make out his identity. Then Ryan took a step forward, revealing the man behind him. She sucked in a breath.

Kirk was back
. For months she’d been wondering where he was and been too shy to ask. She’d worried that he’d transferred to another town or decided to chuck it all and sail around the world. She’d been half-afraid she’d never see him again. But here he was, in the flesh, just as mouthwatering as ever. Her face heated as she darted glance after glance at him, like a starving person just presented with prime rib. It was wrong, so wrong; she was engaged. But she couldn’t help it. She had to see if everything about him was as she remembered.

His silvery gray-green eyes, the exact color of the sagebrush that grew in the hills around San Gabriel, hadn’t changed, though he looked more tired than she remembered. His blond hair, which he’d cut drastically since she’d last seen him, picked up glints of sunshine through the plate glass wall. His face looked thinner, maybe older, a little pale. But his mouth still had that secret humorous quirk. The rest of his face usually held a serious expression, but his mouth told a different story. It was as if he hid behind a quiet mask, but his mouth had chosen to rebel. Not especially tall, he had a powerful, quiet presence and a spectacular physique under his firefighter gear. She noticed that, unlike the others, he wore a long-sleeved shirt.

His fellow firefighters called him Thor. She could certainly see why. He looked like her idea of a Viking god, though she imagined the God of Thunder would be more of a loudmouth. Kirk was not a big talker. He didn’t say much, but when he spoke people seemed to listen.

She certainly did, even though all he’d said to her was, “Black, no sugar,” and “How much are those little Christmas ornaments?” referring to the beaded angels she made for sale during the holidays. It was embarrassing how much she relived those little moments.

Tossing friendly smiles to the other customers, the three men strolled to the counter where she took the orders. They gathered around the menu board, though why they bothered, she didn’t know. They always ordered the same thing. Firemen seemed to be creatures of habit. Or at least her firemen were.

Scoffing at her own silliness—“her firemen” indeed—she left table six, ignoring their pleas for extra butter, and rounded the counter. Trying to look efficient, she pulled her order pad from the pocket of her apron and plucked her pencil from behind her ear. Nervous, she used a little too much force on the pencil, and it went flying through the air like a lead-tipped missile. Kirk caught it in mid-flight, just before it struck Vader in the temple.

He handed the pencil back to her. Their fingers brushed. Her pulse skittered.

“Something he said?” he asked mildly.

She turned scarlet. Even her eyelids felt hot. “I’m so sorry,” she gasped.

“What?” Vader asked, having missed the whole thing.

“Don’t worry, Maribel,” drawled Ryan. “It could have gone in one ear and out the other and he probably wouldn’t notice.”

“Notice what?” An ominous frown gathered on Vader’s jutting brow.

Maribel had a thing about honesty. “I almost stabbed you with my pencil. Well, not stabbed, because that’s more of a deliberate thing, like
Psycho
, you know.” She demonstrated with the pencil, jabbing it up and down in the air. It accidentally hit her pad and the tip broke off with a loud crack.

From behind her she heard Mrs. Gund snort. The firemen looked . . . well, she couldn’t tell, because she was afraid to look at them.

“That’s okay.” She shoved the pad and useless pencil into her apron pocket. “I don’t need to write your orders down. I know what you want.”

“Are you sure?” Ryan said, a wicked twinkle in his eye. His body gave a jerk, as if one of the other firemen had shoved him. Some kind of inside joke, maybe. “I mean, let’s hear it. I didn’t know we were so predictable.”

“Hazelnut quad shot with a Red Bull for Vader, coffee—black for Kirk, espresso with lots of sugar for Ryan—and a dozen muffins of all varieties except bran.” She nodded proudly.

“Good job. High five.” Ryan reached up a hand and she slapped it. Ryan was the certified dreamboat of the group, but for some reason he didn’t make her feel nearly as shy as Kirk did. “How’s Pete?”

“He’s good. He loves the stickers you guys gave him. He keeps bugging me about getting a ride on your fire engine.”

“Open invitation. We’ll roll out the red carpet for him.”

She smiled delightedly, thinking how thrilled her nine-year-old son would be at the prospect of hanging out with the firemen he idolized.

“I’ll have your drinks ready in a minute,” she told the guys. “Be right back.”

Kirk spoke, so softly she nearly missed it. “I like the new photographs.” He indicated the series of three abstract shots of jacaranda trees Mrs. Gund had allowed her to display.

This time her face went pink from pure pleasure. The photographs were her attempt at art, even though they were nothing compared to Duncan’s.

“Thanks.” She beamed at Kirk and, as she hurried off to deliver orders, she felt as if she were floating across the scuffed linoleum of the Lazy Daisy. A single compliment on her photography could keep her going through a whole shift. Especially one from the Viking god known as Thor.

A
S ALWAYS, THE
teasing started as soon as they left the Lazy Daisy.

“Eight words. Anyone have eight?” Ryan climbed into the engine and picked up the onboard cell phone. “He said eight words. I had five. Anyone get closer than five?”

The sound of cheering came over the phone.

“All right, Stud, my man. Eight on the nose. Someone owes you a soda. Not me, but someone.”

Kirk let the teasing roll off him as he fastened his seat belt. Let the guys joke. After what he’d been through, he couldn’t get upset about a little ribbing. Besides, they had a point. Around Maribel Boone, he got tongue-tied. “They were good words,” he pointed out. “She liked them.”

Prayers for the Dying (Pam of Babylon Book Four) by Jenkins, Suzanne
Bird's Eye View by Elinor Florence
The Insiders by Rosemary Rogers
Personal Justice by Rayven T. Hill
Vienna, 1814: How the Conquerors of Napoleon Made Love, War, and Peace at the Congress of Vienna by David King
Dove in the Window by Fowler, Earlene
The Diary Of A Submissive: A True Story by Sophie Morgan
Three's a Crowd by Margaret Pearce
Playing Defense (Corrigan Falls Raiders) by Cate Cameron
Scandal by Carolyn Jewel