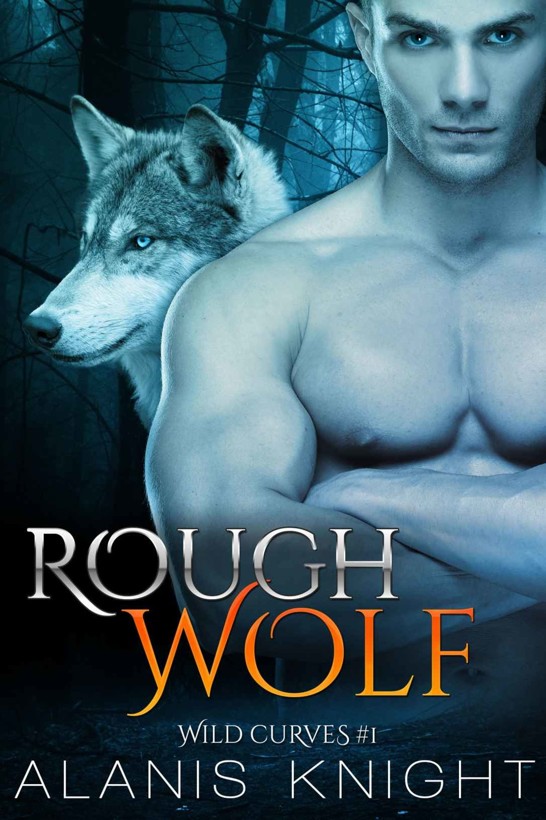 This is a standalone book in the Wild Curves series of BBW/shifter stories.

I’ve been a big girl my whole life. It’s a fact that’s been a source of pain for as long as I can remember, but I never thought it would end up becoming the best thing that ever happened to me!

After a series of bad relationships that ended in heartbreak, I’d sworn off men for good. I even moved out to my grandparents’ cabin in the mountains, determined to learn to be happy being alone.

But a stroll underneath a full moon led to a chance encounter that changed my life forever. Meeting that wolf would awaken something in me I thought was dead and gone, and I would never be the same.

It’s hard when you’re lonely. It’s even harder when you’re trying to convince yourself you’re
happy
being alone.

I’ve always been a big girl. I was a chubby kid, a plump teenager, and now, as an adult, I’m afraid I can’t find clothing in my size in the mall unless I go to those “plus size” stores. It can be especially frustrating when I can’t find boots to fit my wide calves, or when I’m shopping with my thinner friends who insist on holding up things they think would be “so cute on me” while we’re shopping in stores that obviously have nothing anywhere near my size.

I mean, I know it shouldn’t matter. Everyone says it’s what’s inside that counts. Unfortunately, that just isn’t the case for the vast majority of society. Even when they claim they see you for who you are, they usually don’t. And you find that out sooner or later, no matter how much it hurts.

It’s why I’d decided that I was done with relationships. Every guy I tried to date either said he loved my curves, or said he saw me for who I am on the inside. But in every single case, they ended up cheating on me or leaving me for someone smaller. I just got fed up.

It was hard enough growing up being bullied because of my size. I had very few friends in school because everyone just wanted to pick on the “fat girl”. The sad thing was, I really wasn’t all that big back then. I was just a little chubby. But I was the biggest kid in most of my classes, and the other kids never hesitated to remind me of that fact over and over.

But everyone told me things would be different when I grew up. Mom said kids would outgrow their childish behavior, and people would start to see me for me. Oh, how wrong she was.

In fact, I was so fed up I had moved into my grandparents’ cabin in the mountains just to be as far away from people as possible. Maybe it was taking the easy way out. Maybe I was running away from my problems. But it just felt like the right thing to do.

I didn’t really intend to stay there forever. Or maybe I did. I’m not really certain. I just knew I needed a break. I needed to escape from the everyday reminders of the hurt I’d been caused.

I’d been living in the cabin for a few weeks when I decided to take a moonlight stroll by the lake. The moon was full and larger than I’d ever seen. It was intensely bright. It was the perfect night for a walk.

As I approached the lake, the view was utterly breathtaking. The huge moon was reflecting on the water, sparking like millions of massive diamonds across the glassy surface.

It was chilly, and I wrapped my arms around myself. I knew I should have worn a jacket, but I figured my cable knit sweater would be enough to keep me warm. Still, the cool air felt nice on my face, and I inhaled the freshness of the evening deeply.

The fresh air was comforting. Having lived in the city for so long, it wasn’t until I came to stay at the cabin that I realized how dirty the air had been there. I knew if I ever went back, I’d have a difficult time breathing.

The night air was so clean and so cool that it almost managed to make me forget my loneliness for a few minutes.

I was watching the way the moonlight was reflected on the surface of the lake, paying attention to little else, when I suddenly heard a deep rumble in front of me. My breath caught in my throat, and my eyes widened.

Standing before me, his head low to the ground and his fur standing upon end, was a massive gray wolf, his teeth bared as he snarled at me. He was clearly ready to pounce, and as my heart hammered in my chest, my only instinct was to run. His entire body trembled with aggression.

I turned on my heel and fled toward the safety of my cabin. It was just up the hill, but I was wearing shoes that were meant for a sidewalk, not the wilderness. The evening dew had collected on the grass, and my feet could not quite find purchase on the slippery ground.

Something collided with me, sending me tumbling to the ground. I rolled over to face my attacker, and I was met with a piercing set of blue eyes and a fearsome row of jagged wolf fangs. I squeezed my eyes shut, trembling as I awaited my fate, which would surely be death – a painful death of gnashing teeth and savage pain.

After a few moments, when I experienced no ripping of flesh, I cautiously opened my eyes. Instead of the snarling beast I’d seen moments earlier, I saw two human eyes staring down at me with concern.

His eyes were the same piercing blue I’d seen in the wolf moments earlier, but they were softer, kinder. He had a thick mass of brown hair stop his head that was deliciously tousled, a few strands hanging across his forehead. He licked his perfect lips and sniffed my neck.

“You smell heavenly,” he said in a rumbling timbre that sent shivers through me.

What was I supposed to say to that? Should I thank him? I had no idea if he was planning to eat me or claim me as a mate.

“Wh-what are you going to do?” I asked him cautiously.

“I’m going to make you mine,” he answered simply.

I shivered despite the fear that still pounded in my chest.

“What does that mean?” I asked.

“It means you are going to be mine in every… possible… way,” he said as he continued to inhale deeply against the skin of my neck.

“And what if I don’t want that?” I demanded to know.

“Oh, you do,” he said confidently.

“I can smell your arousal, human,” he said. “I can smell how desperately you want me. And if you had the same sensitive sense of smell that I do, you would smell the same intense arousal from me.”

My breath hitched, and I felt his lips brushing lightly against my neck. His body lowered atop mine, and I could feel an erection pressing against me. God, it had been so long since a man had wanted me. In fact, I couldn’t remember feeling so much intense passion, need, from any man. I’d never felt so attractive.

I could feel wetness seeping through my panties and soaking into my jeans. I knew he could smell this. There was no hiding my attraction for him.

The feel of his hot breath against the chilly flesh of my neck stiffened my nipples. His hand gripped my ribcage, and I wanted it to explore the rest of my body.

“You will be mine,” he growled into my ear. “But not tonight.”

“What? Why?” I gasped, unable to mask the disappointment that laced my voice and crushed my heart.

“Because you are more than just a dirty copulation on the cold ground,” he whispered into my ear. “And I want more from you than that.”

I tried to calm my pounding heart, taking slow, deliberate breaths. But it was useless. I was so aroused that I couldn’t calm down.

He brushed his lips lightly against mine, and in an instant he was gone. I sat up and looked all around me, but it was like he never existed. The only reminder I had that told me he’d been real was the lingering scent of him – a musky blend of earth and spice – and the pounding of my heart that simply would not cease.

It was impossible to sleep that night. I tossed and turned as a fire burned in my loins, begging to be quenched. This wolf had touched me in ways I’d forgotten I even wanted to be touched, and he’d barely laid a hand on me. I realized I didn’t even know his name.

There was no point reading one of the steamy novels sitting on my Kindle. Now that I’d experienced it for myself, I knew no story could possibly match the level of passion and excitement I’d felt.

Could it really be possible that such a gorgeous man could really find me attractive? I considered myself very plain. My hair was a dull brown; so nondescript that there was no shade I could think of to describe it. My curves were a lot more ample than I wished for. My face was so ordinary that people often had a hard time remembering my name. It just didn’t seem possible.

My fingertips touched my lips where his had brushed against mine, and my pulse quickened. I squirmed underneath my sheets, aching for release.

He said he’d come to me tomorrow, but I wondered if I could even survive that long. I eventually got so aroused just thinking about him that I pounded my fists against the mattress and growled aloud, rolling out of bed and stomping into the bathroom for a freezing cold shower.

As the icy water pummeled my skin like a thousand frigid needles, I closed my eyes and pictured him. Those incredible blue eyes, that hair that fell across his forehead, those lips that had so briefly touched mine… he was incredible, and I hadn’t even fully seen him.

After my shower, I wrapped myself in a huge, fluffy towel and went, shivering, to stand in the doorway and stare into the night. I watched the edge of the forest, hoping I would see him coming toward me, but there was nothing but the evening breeze and the chirp of crickets to comfort me.

Exhaustion had begun to set in, and I closed the door. My hand fingered the lock, but I left it alone. I hoped my wolf would enter at night and claim me as I slept.

I headed to bed and climbed underneath the covers, chilled to my core. The shivering soon subsided, and I fell into a fitful sleep.