Read One for My Baby (Phoenix Noir Book 4) Online

One for My Baby (Phoenix Noir Book 4) 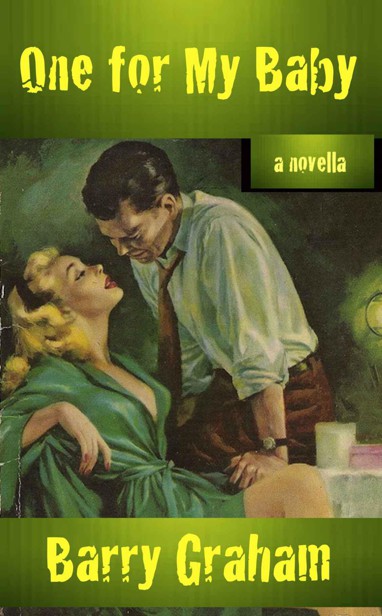 One for My Baby

ONE FOR MY BABY

One for My Baby

REQUEST FROM THE AUTHOR

for Steve and Angie—

the Shadow and the Greek

“Some guys need more’n they have, some guys have more’n they need.  It’s just a matter of getting us together.”

I
t was
the second decade of the 21st Century, but you wouldn’t have known it by looking at Mark. His attire was pure Rat Pack—natty dark suit, striped tie, Fedora. The place was crowded, and people were getting intimate in booths or on the dance floor. Mark was sitting at the bar, alone. He was on his second glass of Jack Daniel’s. He kept looking at his watch, and the bartender kept looking at him sympathetically, guessing that his date had stood him up.

After the latest glance at his watch, he asked for his tab, and finished his drink while the bartender brought it. He paid in cash, left a good tip and walked out of the place.

His car wasn’t in the parking lot, but in a dark, quiet street nearby. He walked to it, and, even though it was late evening, it was still so warm that he had a sweat on when he reached the car. As he approached the car, a beige Honda Civic, he used a remote control to open the trunk. He took off his hat, coat, shirt and tie, under which he wore a black T-shirt.  He tossed them in the trunk, then bent and untied his shoes, kicked them off, put them in the trunk and took out a pair of black sneakers. He closed the trunk, put on the sneakers, and got in the car.

It took him about forty minutes to drive to North Scottsdale, going at slightly over the speed limit. When he arrived at the restaurant, he parked, checked his watch, put on a black ski mask and took a Glock from under the driver’s seat.

T
he restaurant
had closed for the evening, cleanup was done, and all the staff had left except for two managers. The manager was checking his text messages when he heard his assistant, Shane.

Alan turned around and saw Shane standing there with a guy in dark clothes and a mask who was holding a gun to the side of Shane’s head. Shane’s eyes were squeezed shut.

“No,” Mark said. “I’m not Jesus, I’m God. But you don’t have to get down on your knees. Your buddy here’s wrong—you don’t really have a problem, as long as you listen to me. Are you listening to me?”

“Very good. I’m not here to hurt anybody. I just want the money. But if anybody sets off an alarm and the cops come, I’ll kill you before they get me. Do you think I’m kidding?”

“Very good. Get me the money right now. There should be about eight grand.” He extended the empty courier bag in his other hand.

“Yes, you do. This is the night you move the week’s cash. Lie to me again and he’s dead.”

Alan said, “How do you know tonight’s the—?”

Mark shoved Shane to the floor, dropped the bag, and cut Alan off by slapping his face. “The money.”

O
utside, Mark
walked to his car, pulling off the mask. He used his remote control to unlock the car doors and trunk.

Inside, Alan and Shane stood in a locked storeroom. Alan’s mouth was bleeding.

Alan shook the locked door, then kicked it. It didn’t budge.

S
itting in
his car, Mark put on his shirt, tie, coat and Fedora. Then he started the engine. He drove back to downtown Phoenix at the same speed at which he had driven to Scottsdale. He passed a police car. As he drove, he listened to
Dean Martin’s Greatest Hits
.

There wasn’t a lot of furniture in his apartment, just what he needed, which included a piano. His cat, Pangur Ban, was asleep on top of the piano, but he woke when he heard Mark’s key in the front door, meowed, jumped down and ran to greet him.

Mark went straight to the bedroom, dropped his bag on the floor, threw off his hat and coat and kicked off his shoes. He lay on the bed. Pangur Ban stood on his chest and purred.

“How’re you doing?” Mark said, rubbing him under the chin. Pangur Ban rubbed his nose against Mark’s. Mark closed his eyes, and was asleep in a couple minutes.

Pangur Ban jumped off the bed and walked around, sniffing at the coat and hat on the floor. He went to the bag Mark had used, and climbed into it. It was full of banknotes. Pangur Ban played in the money until he, too, fell asleep.

T
he next
morning, Mark woke, still in his clothes. He got up, started coffee brewing, fed Pangur Ban, then took a shower. He toweled himself dry, put on jeans and a shirt and sat in a chair and drank a cup of coffee as he looked at the
Arizona Republic’s
website to see if they’d posted any news of the robbery yet. There was a very short piece just saying that the restaurant was the latest victim in a series of such robberies, and that no one had been arrested.

He put on sandals and a big Amish straw hat and walked a couple blocks to a bar/restaurant called The Duck and Swallow. He had just sat at a table when the joint’s owner, English Tony, came over.

“Mark! It’s been a while, mate. Thought you’d abandoned us.”

“No chance of that. Just been busy.”

“Been playing some gigs?”

“I’d like to have you play here some night.”

“Sure. Just let me know when.”

“It won’t be for a while. I couldn’t afford live music right now. Things have been slow—because of my accent, people are scared I might be serving British beef, and they think they’ll get Mad Cow Disease.”

Tony laughed. “What can I get you?”

“Oh, shut up about Apache Junction. I’m going over there tomorrow. My cousin’s getting married.”

“No, but you know how it is—they’ll make me get up and do a song or two anyway.”

“I’m sure. There’re three people who never get an unconditional invitation to a wedding—photographers, musicians and cooks.”

L
inda was
sitting in the Fair Trade Cafe on Roosevelt and Central, by herself, drinking tea and reading a book. A hand fell on her shoulder. She looked up. “Hey, Karen! What’s up?”

“Getting paid, getting laid,” Karen said. “How about you?”

“Yeah, three months ago. Having a Ph.D. doesn’t make the temp agencies pay you any better.”

“Tell me about it. Well, it could be worse. I’m actually about to start a new job—”

“Waiting tables in a restaurant.”

“Yeah. I guess I can’t ask the customers to call me Dr. Travers.”

“My boyfriend’s brother is the only person I know that’s got job security these days.”

“Works at a homeless shelter.”

P
urves wasn’t
tied to the chair, but the big man named Fitzgerald, who worked for Casci, was holding him down so tightly he might as well have been.

There was another chair, but Casci wasn’t sitting, maybe because the room was grungy and Casci’s clothes were so expensive. He stood beside the empty chair, looking at Purves.

“I just opened a restaurant, did you know that?” Casci said.

“Yeah. What with the revitalization of downtown, I thought it would be a good business to get into. When you work all your life, you need something new and challenging to do in your retirement. Something that lets you draw upon all your years of hard work and experience—two things a worthless punk like you could never understand.”

“You can call me by my first name or my last name now, it doesn’t matter. I’m not your friend anymore, and I’m not your boss. You screwed both of those things when you thought you could take me for a fool.”

“No, you listen. You might learn something. Now, like I was saying before you interrupted, I just opened a restaurant. It’s called Green Life, sort of a health food place. You see, I’ve been reading a lot about food lately. It’s very interesting, it really is. You know why some people think organic, free range meat tastes better? Huh? I’m talking to you, boy!”

Purves saw where this was going, and he tried and failed to suppress a whimper.

“So,” Casci said, “if a lot of pain before dying ruins the flavor of the meat, I hope nobody’s going to eat you...”

“Because your meat is not going to taste very nice at all.” Casci nodded to Fitzgerald, and took a few steps back so the blood wouldn’t get on his suit. He listened to Purves’ screams, but he didn’t really watch what was happening to him. He watched the concrete floor in front of Purves, watched how drops of blood became a puddle that spread so wide that he had to take a couple more steps back to keep it from reaching his shoes.

A
fter the
nuptials, Mark was asked to propose a toast. “I’m hoping, as I’m sure we all are, that once Laura has the surgery that restores her eyesight, she’ll still stay with Paul out of pity... Okay, though, seriously... I’m glad these two wonderful people have found each other. Join me in a toast to their happiness. To Paul and Laura.”

As he tried to sit down, Paul blocked his way. “Hey, not so fast,” Paul said, then took the microphone and addressed the guests. “Some of you don’t know this, but my evil cousin here is one hell of a singer. He actually does it as a job! Now, after picking on me, no way is he getting away without giving us a song on my wedding day. Come on, Marky—show them you ain’t as dumb as you look.”

Mark jokingly feigned reluctance, but got onstage where the band had already set up. “Okay if I use this?” he said to the keyboard-player, who was sitting nearby, and the guy nodded. He sat down at the keyboard, adjusted the microphone, and began to sing:

“We don’t smoke marijuana in Muskogee...”

As people laughed, he stopped and said, “Just kidding. Okay, this is for Paul and Laura.” The laughter faded away as he played and sang a heartfelt rendition of “Strangers in the Night.” When he finished and went to sit down, people kept shaking hands with him.

C
asci sat
at the bar in Green Life. It was mid-evening. “Pretty good for just the third week, huh?” he said to Joel, the bartender.

“Is that right? That’s good to know. If I’d known this business was so rewarding, I would have gone into it before I retired.” He noticed Joel looking past him, watching Linda, the new server, as she carried an order to a table. Casci didn’t have to look to know what had caught the young man’s attention. “She’s better than good too, huh?” Casci said, and they both laughed.

A
s Mark
drove back to Phoenix from Apache Junction,  he listened to Sinatra’s
In the Wee Small Hours
. It was close to midnight, but he wasn’t tired, so he decided to go to the Bikini Lounge.