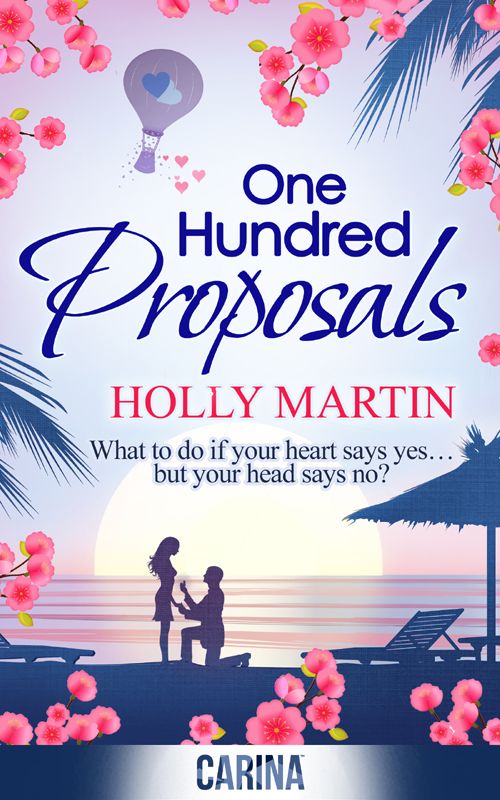 Is there really such a thing as a perfect proposal?

‘Over the next hundred days I intend to find out. I will find one hundred ways to propose to our Chief Proposer Suzie McKenzie and post the results here for your enjoyment. One thing’s for sure, not one of my proposals will be on top of the Eiffel Tower with a dozen red roses.’

Best friends Suzie and Harry are partners in romance. That is, they run the.PerfectProposal.com, coming to the aid of would-be grooms to create the ultimate marriage proposal.

But when Harry decides to catapult the business into the big leagues with a PR stunt all Suzie can see is a hundred days of heartbreak stretching ahead of her. But however exotic the location, or breath-takingly romantic the setting, Suzie has to keep remembering that ‘Marry Me?’ is the one question she can’t say yes to.

This business proposal should come with one hundred broken heart warnings... One hundred proposals, one hundred chances to say yes.

I live in sunny Bedfordshire in a house with round windows. I studied media at university, which led to a very glitzy career as a hotel receptionist, followed by an even more glamorous two years working in a bank. The moment that one of my colleagues received the much-coveted carriage clock for fifteen years’ service was the moment when I knew I had to escape. I quit my job and returned to university to train to be a teacher. Three years later, I emerged wide-eyed and terrified that I now had responsibility for the development of thirty young minds. I taught for four years before History Off The Page came to my school to do a Tudor day. I now drive round the country in my little white van, dressing up as a Viking one day and an Egyptian High Priestess the next.

I love to write. The characters do exactly what I want them to do, most of the time. Sometimes they do seem to go off and do their own thing without my permission. It is complete escapism into a world where I have full control.

I’ve been writing for four years now – every spare second I have, I’m scribbling ideas in a notebook or typing a scene on my laptop. I have written three romantic fiction books. Changing Casanova and The Chainsaw Masquerade were shortlisted for the Festival of Romance New Talent Award in 2012

My short story won the Belinda Jones Travel Club short story competition and was published in the
Sunlounger
anthology, alongside some of my favourite authors – Belinda Jones, Miranda Dickinson and Rosie Blake.

I won the Carina Valentine’s Competition at the Festival of Romance in 2013 and my first novel The Guestbook was published on Valentine’s Day.

Huge thanks to my lovely friend Belinda Jones and my agent Madeleine Milburn who encouraged me to write this story, it quite simply wouldn’t have existed if it wasn’t for you. You both have been my rock through all of this and I feel very fortunate to have you both fighting my corner.

To Kirsty Maclennan and Verity Forbes who read the first half of the book when I was losing faith in it and demanded that I finish it.

For my mom, my biggest fan, who reads every word I have written a hundred times over and loves it every single time.

To my family, my dad, my brother Lee and my sister-in-law Julie, for your support, love, encouragement and endless excitement for my stories.

To Victoria Stone, who read the finished piece first, for falling in love with it and then screaming very loudly across Twitter and Facebook how much she loved it.

To my best friends Gareth and Mandie, for your endless support, patience and enthusiasm.

The other half of the Gosling Girls, Megan Wood and Laura Lovelock. I love my Gosling Girls so much and I couldn’t do it without you all. For the endless promotion, tweets, the blog tour, the videos, the excitement, the gushing and the love. You are amazing.

For my twinnie, the gorgeous Aven Ellis for just being my wonderful friend, for your support, for cheering me on and for keeping me entertained with wonderful stories and pictures of hot men. Thank you for lending me the beautiful Harrison Flynn for my Ice Hockey game in Toronto.

For Sharon Sant for listening to me moan and stress and panic with endless patience and for all your support and friendship.

To all those involved in the blog tour and cover reveal. To anyone who has read my book and taken the time to tell me you’ve enjoyed it or wrote a review, thank you so much.

To the wonderful supportive Carina authors, you guys are the very best.

And finally to all at Carina who have helped to bring this book to publication, my wonderful editor Lucy Gilmour, for making the book so much better, the digital team, Anna and the design team for this incredible cover and anyone else there who has helped to make this book a reality.

Thank you, I love you all.

For the gorgeous Gosling Girls

‘Ok, you can open your eyes now,’ Harry said.

I blinked in the gloom of the cave. Moonlight tumbled through the opening above us, reflecting off the waterfall as it cascaded into the pool below. We had been in Australia for just a few days but I knew it would never cease to amaze me. Dancing in the pockets of the cave walls were hundreds of fireflies, sparkling like fairy lights.

Nothing could have prepared me for what happened next.

The fireflies started to gather together and slowly a shape was formed. I frowned in confusion and then within seconds the words, ‘Suzie, Marry Me,’ stood proud against the cave walls, written by the fireflies.

I whirled round to face Harry in shock. ‘How did you do that?’ I looked back at the fireflies, not wanting to miss anything. Would they perhaps move to form the lyrics of my favourite song? Were they super trained fireflies and in a minute they’d all whip out their mini cheerleader pom-poms and start some kind of dance where they would balance precariously on each other’s backs?

‘It’s some kind of fruit juice, they love it.’

I fumbled in my bag for my camera. ‘We have to get a picture for the website.’

I fired off a couple of shots and I could see a few other tourists had entered the cave and were clearly waiting for my answer. They’d be waiting for a long time.

‘So what do you think?’ Harry said. ‘Is this the perfect proposal?’

‘It’s definitely one of your best, very romantic.’ I focused my attention on the photos I was taking. They were going to look fantastic with the waterfall in soft focus in the background and the fireflies in sharp detail set against the inky blue light of the moon.

‘But still not the perfect proposal?’

‘Not for me, but someone else would love it.’ I watched the faces of the other tourists fall at my callous response. ‘We’re not together, we just work with each other.’ One couple looked at me dubiously, so I pressed on. ‘Our company creates the perfect proposal, this kind of thing is our bread and butter.’

I resisted the sudden urge to rush over to them and start handing out business cards. As if reading my mind, Harry slung an arm round my shoulder, restraining me with his hand.

I looked up at him innocently but he didn’t seem convinced.

The tourists moved further down the cave, leaving us alone.

‘You always do that,’ Harry said.

‘What, promote our business? I know, I can’t help it. I’m just so proud of what we’ve achieved that I want to tell anyone that listens and anyone that doesn’t.’

‘No, not that. You always say
our
company,
our
business. It’s yours, you started it. I’m just the tech guy.’

It was just me to start with. I created the.PerfectProposal.com over two years ago when my boyfriend at the time proposed drunkenly to me over a greasy kebab. It struck me that maybe the menfolk of this world might need a little helping hand to create a proposal their girlfriends would remember forever. Although the greasy kebab is not one I’m likely to forget.

Harry was my web designer. When the business first started he would come by my office, the back bedroom in my home, every day to help update the website with my new ideas, photos and special offers. In the end it made sense to make him a permanent feature. Our website looked fantastic and as an online company this was integral to our success.

But Harry wasn’t just the geeky IT guy, far from it. He was the biggest man I had ever seen in my life, with large thighs and big feet. He had stubbly, dark hair and chocolate eyes. But he also had a vivid imagination – where I was organising the logistics for a champagne helicopter trip, he would be the one that would come up with something completely unique like using fireflies.

‘And you always put yourself down. We’re equal partners now, you helped to make the company a success too,’ I said.

He shrugged, never keen to accept that he played such an important part in it. He gestured to the fireflies that were starting to break formation now. ‘Is it too sickly?’

I let my camera hang round my neck and leaned into him, I loved the way I fitted against him. ‘I love it, I really do, it’s… magical. But there’s still something missing.’

Was there really such a thing as a perfect proposal? Three months ago, just before Valentine’s Day, Harry had made it his mission to provide me with one. But deep down I knew what I wanted and I doubted Harry would be able to deliver it. I should have told him that when he first started this wild goose chase. It would have saved me a lot of heartache.

I put the phone down on another excited client and sighed. It was February 11
th
and we’d had a surge of customers all desperately wanting to propose on top of the Eiffel Tower on Valentine’s Day. I felt like screaming. It was only by careful planning that I’d arranged that my customers weren’t going to be there at the same time. That’s just what a girl wants to feel special, to see other girls being proposed to at the same place and time that she was. Was there no originality anymore? Harry was brilliant at coming up with unique proposals, but no matter how many times I had tried to sell Harry’s ideas to them, they wanted the traditional and that was that.

‘Another Eiffel Tower?’ asked Harry as he absentmindedly uploaded photos to our rolling gallery.

‘He wants a dozen red roses delivered to the observation deck at eight.’ I rubbed my head in defeat. ‘What about something different, going to the ballet or proposing over a bag of chips at the end of Brighton Pier?’

He swivelled in his chair. ‘What would be your perfect proposal?’