Read One in a Billion Bear ~ Beck: Book 2 Online 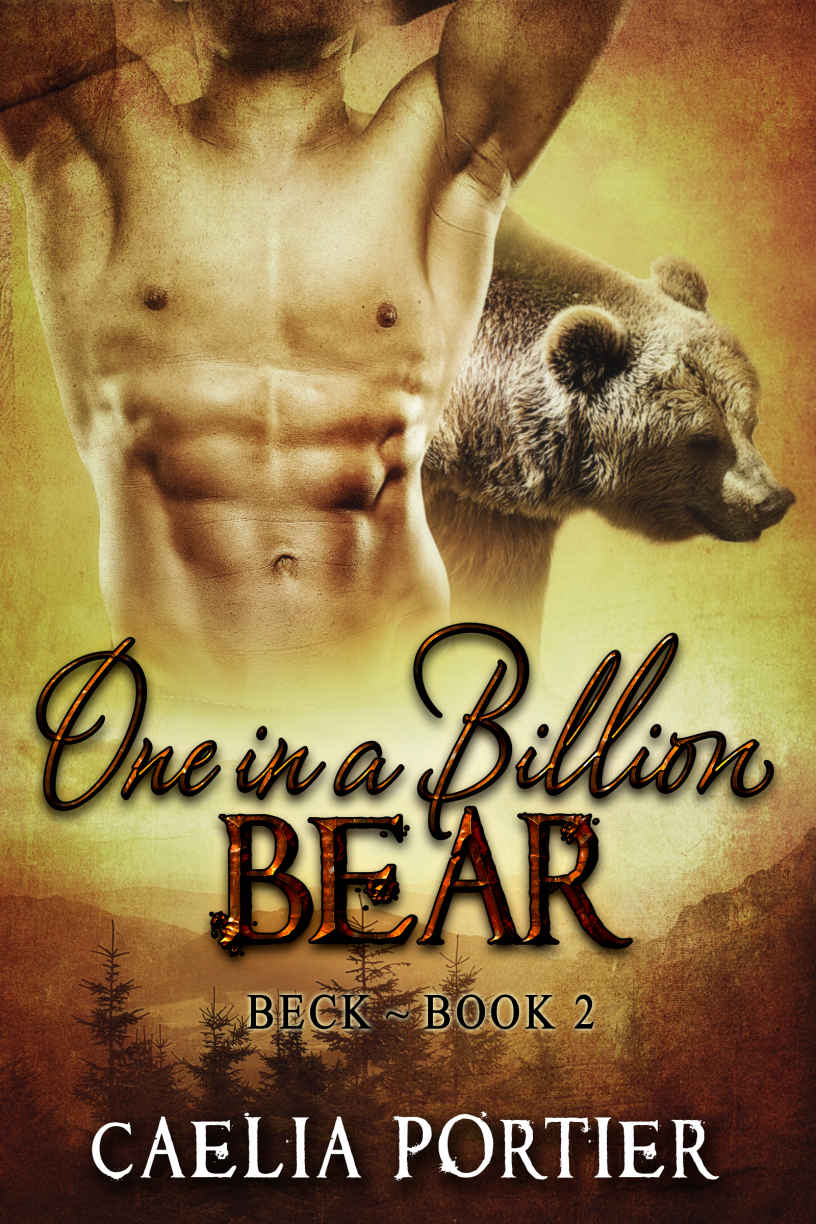 One in a Billion Bear ~ Beck

Adult Content Warning: This work contains adult content for those aged eighteen (18) or older only. It contains sexually explicit scenes and language, not for the weak of heart, which may be considered offensive. If you consider these subject matters offensive, please do not read any further. All sexually active characters depicted in this work are aged eighteen (18) or older, unrelated by blood, and are consenting adults.

This book is a work of fiction. Names, characters, places and incidents either are products of the author’s wild imagination and/or are entirely fictitious. Any resemblance to actual persons, living or dead, events, or locales is purely coincidental.

Did you miss Penelope and Brady’s story? Don’t worry! You can grab it here:
One in a Billion Bear ~ Brady: Book 1

One in a Billion Bear ~ Beck

“Hey tits, I need another Coors!”

Another Friday night at the bar. I’m used to it by now, but that doesn’t mean I like it.
Or tolerate it.
I brought a glass of Coors over to the man standing at the far end of the bar who looked awfully satisfied with himself, despite his ratty beard and dirty, torn up Dale Earnhardt Jr. t-shirt. He smiled at his friend, and I heard his friend mumble something in a lecherous tone. He reached out for the Coors, smirking, and I pulled it back just out of reach, effectively removing said smirk.

“If you call me tits again, the only thing I’m going to serve you is piss. Do you understand?”

“What the… it’s a compliment! You got a great body, girl.”

“Oh well ain’t you a stuck up bar whore—”

I didn’t even let him finish. I threw the beer in his ugly, twisted face. For a moment he was surprised, then reached across the bar and grabbed my arm before I could back away. I tried to pull away, but his grip was too tight.

“You fat fucking bitch! I’m gonna teach you,” he bellowed as he raised his arm menacingly. It was all happening so fast, yet a million thoughts somehow had time to enter my mind.

I could block a hit, but maybe only once or twice. He was deceptively strong. There wasn’t a weapon behind the bar that I could reach. The voices of other patrons and my co-worker all meshed together. I put up my other arm and braced for impact.

Someone grabbed the man’s arm and commanded coldly, “Let her go and get the hell out.”

We both looked at this man. The stranger was a full foot or two taller than my attacker. Even colder than his voice, his blue-grey eyes bore icily into the other man’s face. The grip on my arm loosened and the two men stood facing each other silently. My attacker appeared uncertain about what to do. He was clearly fighting with his pride. The stranger was unflinching.

“I’m going to call the cops if y’all don’t settle down,” said Bobby, the other bartender, matter-of-factly. Bobby has worked in the bar even longer than me. He’s seen it all, and he doesn’t get riled easily.

“Hmph, ya ain’t worth it anyhow,” said my attacker. Then he looked me up and down contemptuously. “Neither of ya.” He slunk out with his friend like two guilty dogs.

After watching them leave, I looked back at the stranger standing in front of me and was taken aback by his cold eyes on me. Except they were softened by concern.

“Are you okay?” His voice again reflected his eyes. Standing so much shorter than him, I almost felt like a child.
Now who’s fighting with their pride?
I massaged the sore red spot on my arm mostly out of nervous tension.

“I’m fine. Jerks like him come in here all the time.”

“You shouldn’t work in a place like this,” he said, looking around at the smoky, dimly lit bar.

“You’re right! Let me just tell Bobby I’m quittin’ to pursue my dream of being homeless,” I said sarcastically. My tone had more of an edge than I meant it to, so I smiled crookedly at him to try and smooth it over.

I thought at first it didn’t work because his eyes regarded me critically, but then the right side of his mouth turned upward slowly. Amused, he said, “I’m sure you could find someone to take you home.”

Everything below my waist twisted and liquefied on the spot, but I was determined not to give myself away, so I laughed loudly. “Finding someone to take me home is not the hard part. Finding someone who knows what to
do
with me, well, that’s the challenge.” I winked at him in the casually flirtatious way I had refined to an art working at the bar and walked away. There were customers to get to and I was grateful for their demands. It gave me a reason to walk away from him that didn’t look like running.

Fifteen minutes or so passed before I noticed he stayed there at the end of the bar, and it finally occurred to me I hadn’t asked him if he wanted anything.
Dammit.

“What can I getcha?”

He smiled. “I don’t suppose you have a beer list.”

I lifted an eyebrow and he laughed a little. “Okay. So just what’s on tap? How about… eh… Blue Moon.”

I nodded and turned away. When I came back he looked more comfortable, seated on the bar stool with his expensive-looking sweater pushed up below his elbows. He was certainly better dressed than anyone else in the bar. Or hell, in town. His dark brown hair was shiny, thick, and brushed back casually.

“You’re not from around here,” I said, handing him the beer.

“I am, actually, but I haven’t lived here in a long time.” His tone was light and friendly.

“So you got family here? Is that why you’re visiting?”

“I do. My family has lived in this area for many, many years. This is the first time I’ve been back in about thirteen years.” There was a hint of sadness and resignation in his voice.

He smiled warmly, no longer wrapped up in his thoughts, “Thank you….”

“Crista.” I extended a hand.

“Beck.” He took my hand firmly and shook it cordially.

Everything about the interaction was totally normal, except strangely it wasn’t, and I had a sense that I was meeting someone that would become very important to me. Sometimes I had one-night stands with bar patrons, especially guys just passing through town. Not a big deal. Beck was different, though, right from the start.

His clear, penetrating eyes looked into mine with the same unflinching intensity as when he faced my attacker, but now they appeared to burn with desire.

“I’m in trouble.” I blinked, realizing I had said out loud what I was thinking.
How could I have done that?

I took a step back, momentarily shocked at my own blunder. I don’t normally have any difficulty talking to men. He didn’t even try to hide his amusement for my benefit.

“I mean, I’ll be in trouble if I don’t get back to work. Obviously.” I turned away immediately and tried to hide my red face from the other customers.

“Hey, babe. Where ya been? Don’t you and Brady ever need to eat?”

My new best girlfriend giggled like a schoolgirl. I’d be embarrassed for her, except it was great to see her happy.

“Between you and me, Brady eats plenty.”

“Penelope! Your mama’s ghost is still in that house.”

“Don’t say that! You’re the one that was saying I needed to get laid.”

I told her everything that happened the night before at work, trying to sound nonchalant, but as I talked more about Beck, it was harder to maintain the facade. I did what I always do. I made jokes.

“He looks wealthy, so I think I just found a sugar daddy. If you see a shiny black limousine pull up outside your house, it’s just little ol’ me.”

“I just met him, Penelope. I met you several months ago and I still don’t like you.”

“Girl, please. You like him and you
love
me.” More giggling.

I rolled my eyes.

“Well, okay, I think he might be…
special
.” I said it reluctantly, but I had the biggest, stupidest grin on my face. Thankfully, we were just talking on the phone and not in person.

“So did you exchange numbers? Did he say he’d called you?”

“I didn’t really give him a chance to…” I almost admitted to avoiding him, but then said, “I was really busy. And besides, I don’t want him to think I’m easy or something just ‘cause I work in a bar.”

“How is he going to be your sugar daddy if he can’t find you?”

Penelope laughed and then said regretfully, “Now I wish I hadn’t skipped out on coming down last night.”

“Speaking of you being an absentee friend, how are things going with Brady? You haven’t said much at all about him.”

There was a stiff silence.
Why was she being weird about this?

“Barely.” I exhaled heavily, feeling annoyed and weary that my friend was not talking about her boyfriend.
Could Brady have some awful secret? Was he cooking meth or something?

Hesitantly, Penelope added, “I didn’t actually see him last night. There was some kind of drama going on in town. He was really angry and didn’t want to talk about it.”

My mind went back to drugs. “Brady didn’t say anything about it?”

She faltered a bit. “I don’t know. He can just be so territorial sometimes.”

I sighed. “I hope he doesn’t drag you into any of that drama.”

“He would never do anything to hurt me.”