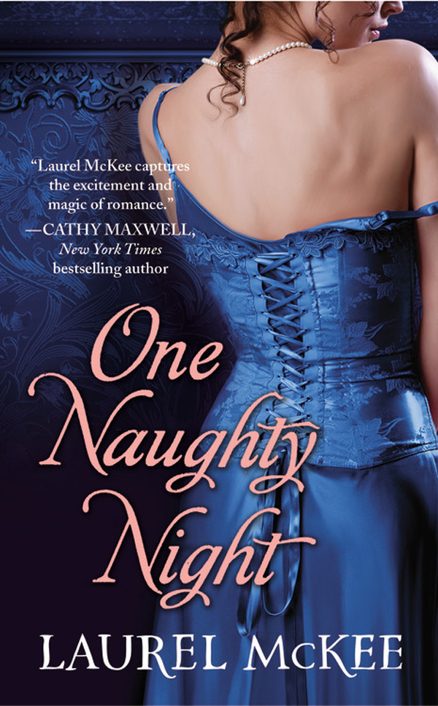 A Preview of
Two Sinful Secrets

I have always thought my sister to be the romantic soul in our family. She is constantly devouring volumes of French poetry and wandering the woods sighing over their beautiful words of soul-deep love and flights of two hearts beating as one. She has always declared me a terrible bore, concerned only with prosaic, everyday reality! Concerned with running our father’s house and trying to keep our family together amid the long war between king and parliament and all the troubles that followed.

I only ever laughed at her teasing. I was quite sure it was far better to be dull and content with everyday matters than to long for romantic dreams that can never be. But I was very wrong. Horribly, wonderfully wrong. For I have met
him
.

I
t was a complete disaster.

Lily St. Claire ran down the red-carpeted stairs of the Majestic Theater and through the gilded, near-empty lobby. A few people lingered there on the velvet banquettes or at the mirrored bar, sipping champagne. But most were in their seats and their fine boxes, savoring her ruin.

The long, pleated silk and muslin skirts of her Juliet costume wrapped around her legs, and she stumbled. Even the costume seemed to be against her tonight. She snatched her skirts up in great handfuls, crushing the fine fabric, and kept running.

Lily burst out the doors and onto the marble steps that led to the theater. Earlier that evening, when her nervous hopes were still alive, carriages had deposited their owners at the foot of those same steps. Ladies in fur-trimmed cloaks and gentlemen in top hats had flowed up them, all of society come to see a new William St. Claire production.

“It is sure to be excellent,” they said to each other. “His
As You Like It
last season was marvelous. A triumph!”

Her adopted father’s Shakespeare productions were always a triumph, year after year, even in the crowded London theatrical scene. They paid for the Majestic and helped with all the St. Claires’ many business operations, both respectable and not so much. But
As You Like It
had starred William’s wife, Katherine St. Claire, a glittering star of the stage, in her farewell performance as Rosalind.

He had not been so careful in his casting of
Romeo and Juliet
.

“What a fool I was,” Lily whispered. After her youthful life in the back alleys of London, she had thought she could never feel foolish again, especially over mere playacting, but here she was. She hurried down the steps and around the side of the building, hoping to find a hiding place before the audience departed. They were all watching the farce that always followed the main play, but that would be over soon and everyone would be leaving the theater. She didn’t want to hear their comments.

In his own gentle way, her father had told her that she was not yet ready for a lead role. “You learned so much as Bianca in
The Taming of the Shrew
last year, my dear,” he said when she pressed him about Juliet. “Perhaps one more season would help prepare you…”

But no. Stubborn fool that she was, she had insisted that all her acting lessons, all her years of watching the St. Claires since they adopted her when she was nine, were enough. She was ready to be a real actress.

To be a real St. Claire.

But as soon as she stepped onto the stage, with the lights dazzling her eyes and the Renaissance velvet costume
weighing her down, she froze. She could not remember her lines or her blocking, could not even remember her character’s name. Only when the actress playing the nurse grabbed her hand hard and mumbled her first lines into her ear had she remembered.

After that she stumbled through the play like a numb, terrified fawn, the whole thing a horrifying blur. She didn’t know how she ever made it to the end.

It was certainly not the most terrible thing that had ever happened to her, Lily thought as she kicked out at a pile of crates stacked by the wall. Pain shot through her toes. No, freezing up onstage was nothing to watching her mother die of opium addiction or starving and picking pockets on the streets of Whitechapel, as she had all her life before the St. Claires took her in. It wasn’t like being caught by the wrong people at the wrong time.

But the St. Claires
had
saved her from all that, had raised her as their own, educated her, fed her, clothed her. Loved her. That made this failure even worse. It wasn’t just
her
failure—it brought them down too.

The Majestic was her father’s great dream. He had fought so hard for it and worked so much to make it a success. And she, with her foolish self-confidence and her stubbornness, had ruined its season opening.

Lily made her way through the maze of loading docks behind the theater, where scenery and crates of costumes were unloaded. Usually the stagehands hid there for a quick smoke or nip of gin, away from Katherine St. Claire’s sharp eyes, but tonight the docks were deserted.

She dropped heavily onto a wooden bench, letting her skirts fall around her. She dragged her veiled cap from her head and shook out her heavy brown hair.

“I suppose I’ll have to marry Harry Nichols now,” she said, and shivered. Harry had been a most persistent suitor lately, and he was a prosperous one with his greengrocer stores and house in Piccadilly. He was also handsome enough in a florid way and well mannered.

But there was something in his eyes when he looked at her that she did not like.

“Now, that would be a shame,” a deep, brandy-smooth voice said from the shadows.

Lily leaped from the bench and whirled around. It was so dark that at first she couldn’t see anything at all. She could only hear the soft sound of breathing, the slight brush of fine wool fabric.

Her body grew tense and alert, every instinct from her childhood in the slums rushing back over her.

She had become weak in recent years, letting her guard down, not paying attention to every aspect of her surroundings. In Whitechapel, she would have been dead minutes ago.

“Who is there?” she called. Her hands curled into fists as she scanned the dock. “Show yourself!”

A man stepped from the shadows, his hands up, palms out. A lit cheroot was held between his lips, which curled in an infuriatingly amused smile. He didn’t look like a Whitechapel creeper. He was tall and leanly muscled, dressed in a well-cut evening coat of dark blue wool and a cream-colored silk waistcoat. A simply tied crisp white cravat looped about his neck, skewered with a sapphire stickpin.

Lily stepped back to study him closer. He
was
handsome, she had to admit—almost absurdly so, as if he were a painting or a sculpture. His hair, a deep, glossy mahogany brown, swept back from his face in waves to tumble
over his collar. His face was all sharp, aristocratic planes, with bladelike cheekbones, a straight nose, and a square jaw with the tiniest dimple set just above it. His eyes were very, very blue, almost glowing, set off by smooth olive skin and a shadow of dark whiskers along his jaw.

He didn’t look like a criminal, lurking about to rob unsuspecting theatergoers. But Lily knew very well how appearances were deceptive. After all, didn’t she appear to be a lady now—even if she was not a Shakespearean actress? In reality, deep down, she was still just that street urchin, daughter of a whore.

The man slowly plucked the cheroot from between his lips and held it between his thumb and forefinger as he exhaled a plume of smoke. It wreathed around his head, making him look like a demon emerging from hell. A handsome Mephistopheles sent to tempt her.

“Are you going to call for a constable to arrest me?” he asked.

“What are you doing here?” Lily demanded.

He held up the cheroot. “Just having a quick smoke. I don’t much care for farces.”

Or for pitifully bad productions of Shakespeare? She dared not ask. She watched as he dropped the cheroot and carefully extinguished it under his polished evening shoe.

“I’m not here to start a fire, I promise,” he said with an enticing grin. “Or to accost young ladies fleeing from Verona.”

“No,” Lily said. A sudden weariness washed over her, as if the whole long, awful evening had caught up to her. She sat back down on the bench. “I don’t suppose you are. And this is a good place to hide from farces.”

“And from my mother,” he said. “She
does
enjoy farces,
which may be why she’s always trying to introduce me to blasted ‘eligible females.’ ”

Lily had to laugh at the wry tone of his voice. She imagined “eligible females” chased him down wherever he went. She still wasn’t sure about him—he was a stranger, after all, even if he was unearthly handsome. She knew better than to trust any man. But she was suddenly glad not to be alone.

He was as good a distraction as any.

She slid over on the bench in silent invitation, and he sat down next to her. He didn’t touch her, but the bench was small, and he was close enough that she could feel the heat from his body. He smelled delicious, of some spicy cologne, expensive soap, and something wonderfully dark that was only him. She had to resist the urge to bury her head in his shoulder and just inhale him, as if he were a drug that could make her forget.

“So you have to marry too?” she said.

“Someday, I suppose.” He took a small silver flask from inside his coat and unstoppered it before holding it out to her in silent invitation.

Lily cautiously sniffed it. Brandy, and very good stuff too. She took a long sip and handed it back. He also drank, and she watched in fascination as his strong throat moved above the cravat.

“But,” he continued, “I am luckily not promised to this Harry Nichols, whoever he might be. The name alone sounds appalling.”

Lily laughed. The warm smoothness of the brandy—and his close presence—seemed to be working its spell on her. “He’s not so bad, I suppose. There are surely worse fates than to be Mrs. Nichols, queen of the greengrocers.”

“But there must be better ones as well.”

She thought of her wretched failure as an actress, her lack of skills in anything else except keeping accounts. She
was
rather good at numbers, but that held little appeal next to her glamorous brothers and sisters. “Not for me, I think.”

He shrugged and put away the flask. “We all have to do what we must.”

Three and a Half Weeks by Lulu Astor
Aphrodisiac by Alicia Street, Roy Street
Daring to Dream by Sam Bailey
Getting Over Getting Mad: Positive Ways to Manage Anger in Your Most Important Relationships by Judy Ford
McNally's Dilemma by Lawrence Sanders, Vincent Lardo
Unspoken Epilogue by Jen Frederick
Quentins by Maeve Binchy
The Pirate and the Feisty Maid-- Part One—At His Hand by Cali MacKay
The Boys from Binjiwunyawunya by Robert G. Barrett
Orphans of Earth by Sean Williams, Shane Dix