Read One Night in the Outlaw's Bed Online

One Night in the Outlaw's Bed 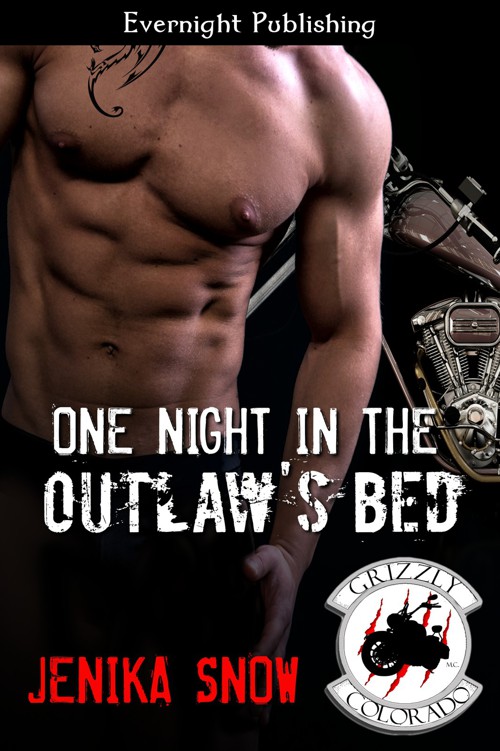 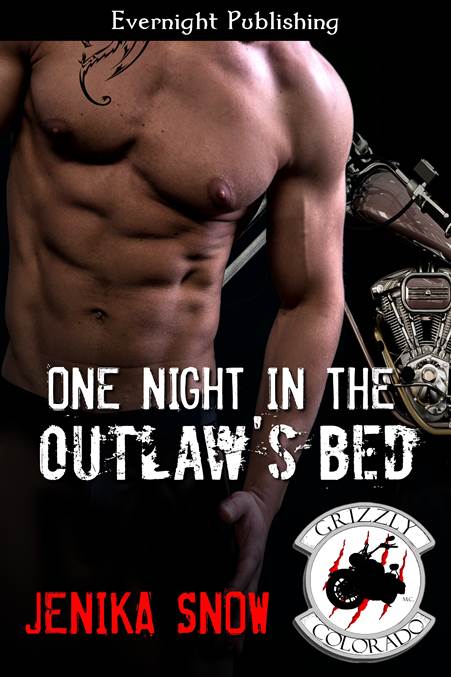 Thank you
readers for all of your continued support, and thank you
Evernight
for being such an amazing publisher.

ONE NIGHT IN THE OUTLAW’S BED

She shouldn’t watch him. She shouldn’t even look his
way. All that accomplished was seeing the skanks rub themselves all over him
and the other MC members like they were cats in heat. Maggie Drake looked down
at her fruity drink that was half full, picked up the glass, and downed the
rest of it.

“Whoa. Looks like someone wants to get trashed
tonight?” Mora, her best friend since they had been twelve years old, was
grinning.

Maggie shook her head and breathed through the burn
of alcohol. The drink wasn’t even
that
potent, at
least it shouldn’t be, but clearly the bartender had felt generous when filling
it with liquor. Well, better for her because she was feeling pretty shitty.

“Yeah, and I’m getting another one. I don’t even
want to be able to see straight by the end of the night.” Mora’s grin fell, and
she gave Maggie a sympathetic look.

“Honey, getting laid off isn’t the worst thing to
happen.”

Maggie shook her head again and played with the rim
of her glass. “Maybe not, but it sucks nonetheless. Oh, and let’s not forget
about the fact I moved back to this shitty little town after that douche-bag
John broke up with me for some big, fake breasted bimbo.” She held up three
fingers to Mora. “I also get to work for my dad in an automotive parts store of
all places, too.” It sounded even worse when she said it aloud. “And living in
his basement at the age of twenty-three isn’t humiliating at all.” The last was
said thickly with sarcasm. “That kind of brings the whole sucky thing full
circle.”

“Ever hear the saying ‘Everything happens for a
reason’?”

Mora shrugged and tried to offer another smile, but
it wasn’t as peppy as it was moments before. Mora stared at her for a moment
and breathed out. “Ok, let’s get you another drink then.”

Maggie gave her
a thumbs
up, and watched as Mora left their pub table and headed to the bar. Maggie
looked over at Diesel, against her better judgment, but shit, she couldn’t help
it. She had known the man for as long as she could remember. But he was this
feared outlaw in Steel Corner, associated with The Grizzly MC, and she should
run in the other direction, not want to gravitate toward him. He was over ten
years older than she was, was the freaking vice president of the motorcycle
club, and was a bear shifter on top of that. To say he was dangerous was an
understatement. Although she wasn’t privy to club business and didn’t know the
members on a personal level, she knew enough. Like every other Steel Corner
resident, she knew that the Grizzly MC was badass, did illegal activities, and had
a very violent nature. People steered clear of them, and just a look at their
leather and cut wearing appearances scared the shit out of people.

Although she might not be “friends” with the club,
she probably saw them on a more personal level than most of the town’s
residents did. That was a given when her father owned an automotive parts
business and the MC members came to him several times a month. So getting
involved with Diesel, in any shape or form, would be bad for her. Not to
mention he had been a man-whore before she moved out of Steel Corner, and after
seeing three women walk up to him and rub themselves all over his leather-clad
body, it was clear he still lived that lifestyle. But even knowing all of that,
and telling herself that she most definitely did not want a man like Cane “Diesel”
Marsh going anywhere near her in a sexual way, she couldn’t help but stare at
him. Watching his thick, muscled forearm flex when he lifted his arm up to
bring his beer bottle to his mouth had her wet between her thighs.

She wanted him, had wanted him since she was
seventeen years old and she had been working the weekend at her dad’s shop.
Even years later she could still picture that day so clearly.
Diesel had come in with a bunch of the other MC members, and that was the first
time she had been so close to him, had smelled the leather, sweat, and motor
oil that had surrounded him, and knew for the first time in her life what
hardcore lust was. But he hadn’t noticed her other than a glance and a chin
lift her way. She would have lain on the counter naked for him if he ordered
her to do it. That was how much she had wanted him. She had been dumbstruck by
the dangerous aura that came from him—from all of them. All it had taken was
that one moment for her to know that she wanted Diesel to
own
her—even if at the tender age of seventeen she hadn’t even
known what the hell that truly meant, but she knew she wanted it. Maggie wanted
him to make her feel what it was like to have a real male fuck her.

A shiver worked over her body at that thought. That
seemed like ages ago now, but even moving away hadn’t done anything but push
those carnal desires deep down inside of her. Now being back in town had
everything rushing forward. All it took was the sound of motorcycles coming
down the road, and the sight of that metal glinting under the sun as they
passed through town, for her to feel that hardcore desire she had whenever in his
presence. And now, seeing Diesel in the flesh after so many years, yeah, she
was wet and wanted him, and knew that he was the only man that could give it to
her.

She glanced at him again. He wore a short sleeved
shirt, and the tattoos that covered his entire right arm from wrist to under
his shirt were so damn arousing she actually clenched her thighs together. She
could overlook the slut currently perched atop his lap, could even ignore the
way she had her arms wrapped around his neck and played with the light blond
hair tied at the nape of his neck. But what she couldn’t ignore was the
pounding of her pulse between her thighs every time she looked at him.

Get a grip.
You’re
back
home for less than a week and already you
are fantasizing about Diesel?

She glanced at Mora at the bar, but she was too busy
flirting with the bartender to worry about bringing the drinks back so they
could get good and sloshed. Maggie looked back at where Diesel and a few of the
other bikers sat. Diesel’s expression was stern as he leaned forward and rested
his forearms on the table—slut-free, she noticed—and spoke to Court. It was
like she had never left, and all these years hadn’t passed. Being away from
Steel Corner had been good for her, at least that was what she thought, but as
soon as she stepped back in this town all of her old feelings resurfaced. And
those old feelings had to do with Diesel currently looking right at her.
Maggie’s mouth went dry, her heart started to pound fast and hard, and she
swore Diesel could tell she was on edge even from this distance. His light blue
eyes watched her with this knowledge that had always made her feel twitchy, as
if he could see right into her soul. His mouth moved, and she realized he was
still talking to Court, but kept his attention right on her.

God, he was still so big, maybe even more muscular
than the last time she had seen him, and those muscles were clearly visible
under his shirt and leather cut. Maggie tore her eyes away from him, because
even though she had a nice buzz going on, she wasn’t nearly drunk enough to let
her thoughts go to where they were trying to go: her under Diesel’s huge body,
both of them naked, and him pumping into her like he was staking a claim. Her
cheeks heated, and fortunately Mora came back, slid a big-ass margarita in
front of her, and started talking about the bartender. Maggie grabbed the
drink, sucked down half of it, and waited for oblivion.