Read One of the Guys Online

One of the Guys 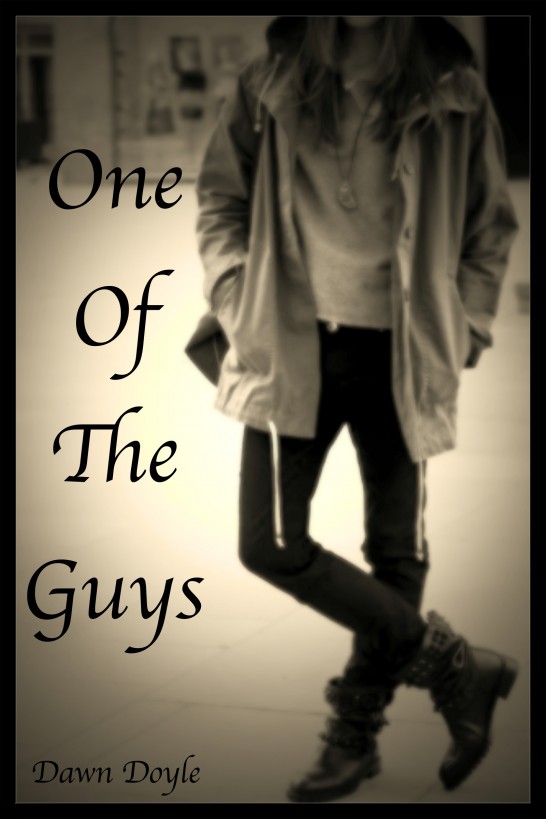 One of The Guys

One Of The
Guys

This is a work of
fiction.

Names, characters, businesses,
places, events and incidents are either the products of the
author’s imagination or used in a fictitious manner.

Any resemblance to actual persons,
living or dead, or actual events is purely coincidental.

This book
is dedicated to my Granddad, George.

I know you’re watching over me from
your big fluffy cloud in the sky & pushing me in the right
direction.

Let me
introduce myself.

My name is Chase.

Chase Marie McKay to be exact, and
I want to tell you my story.

It all started in junior year of
high school. Actually, it was Freshman year during a class project,
but things changed a lot at the end of junior year.

My best friend is Logan Blackwood.
Yeah a guy.

Our class project brought us
together.

However, things changed; I
changed. You could say I went a little off the rails. Ok, a
lot
off the rails; for
me anyway.

There’s more to this story than
just a teenage girl going into a stupor, so I guess I better start
from somewhere near the beginning. After all, you need to know why
I did what I did.

I sat in my room,
at my desk, and remembered the first time I met Logan, my
BFF.

It was freshman year of high
school, and I thought he was drop-dead-gorgeous even
then.

I was really shy at the beginning
of high school, ok,
most
of high school, and I hadn’t really spoken to
anybody what with my shyness and different taste in clothes. I was
more like a tomboy and always wore clothes that hid my body
well.

I wore combat style pants or jeans
and different styles of T-shirt or button down shirts.

Also, I never wore my hair out. It
was either in a ponytail or a braid. Or even a pony-braid. Yeah, I
liked to mix it up.

When my hair was loose, at home, it
skimmed my ass. It was long, too long, but I liked it that way. It
wasn’t all one length, mind you, I didn’t look like cousin IT. I
had some shorter layers cut around the sides and front to add a
little texture. That was what the stylist person recommended, and I
couldn’t be bothered talking about it, so I just let them do
whatever as long as it stayed long and the one color.

Anyway, we’d been in school for
about two months when he asked me whether he could borrow a
pen.

“
Hey Chase, can I borrow a pen
please?” Logan asked.

Nice manners
I thought to myself.

I was lost for a second when he
spoke. He hadn’t said more than ‘hey’ to me since we started, and
he’d sat at the table next to mine.

Not a huge smile but enough to get
my heart racing. I reached into my bag and got out a
pen.

“
Thanks.” He took the pen and,
still looking at me, he put the capped end into his mouth and
pulled the lid off between his teeth.

I looked away and got back to my
work, trying to look as though I wasn’t affected at all.

I was only fourteen, and I had just
gotten my first crush.

It was that same afternoon when in
another of our classes that day, History, all of us had to pair up
for a project. We were to research and put together a paper on the
civil war of 1861-1865.

The teacher picked names out at
random and, to my surprise, I was paired with Logan.

He hadn’t said anything, but the
guy next to him laughed and said, “That sucks dude.”

Did it suck to be paired with me?
Am I so bad?
I thought to myself.
They don’t even know me.

I tried to let it go although I
wondered if what he’d said was true.

Luckily, Logan didn’t seem to mind.
All the other boys, and some girls, snickered under their breaths,
and he didn’t even respond. That made me like him even
more.

We met up in the library, during
lunch, and decided we would study at my house after
school.

It turned out to be fun. My Kitten,
Ruffles, adored him and purred at his side the entire time he was
there.

When he left, my Dad took him home
and then Logan texted me when he got there. He said he had fun
studying and that I was pretty cool.

I was so happy!

So, after two weeks, we turned in
our paper and we both got an A.

I was sad when it was done, but
Logan said it’d be cool if we hung out sometimes. He liked my
music, rock of course, and my kitten.

It’s not what you think. Logan
never tried anything, and he never asked me out though I wished he
did. We just watched TV or studied. The usual things friends
did.

We even went to his house to play
basketball and video games.

His older brother, Matt, teased
Logan saying I was his girlfriend. Logan made it very clear I
wasn’t.

“
She’s my friend, Matt. Guys can
have girls as friends you know!”

I just stood and watched as Matt
made kissing noises at us and I felt embarrassed. Logan didn’t just
stand there though. He pushed Matt hard enough to knock him on his
ass.

“
Don’t embarrass Chase again,
asshole!” He shouted at him. Logan was furious. He’d seen my
blush.

He was so sweet.

Matt looked genuinely surprised as
he got up. He mumbled something about Logan being a ‘fuck-face’, I
think, and stormed away, glaring at me as he went.

I really didn’t like Matt. He was a
senior and, luckily, I didn’t see him around school.

And that was how we spent our time
together.

Between his other friends and my
gymnastics, we hung out just like normal friends did. He wouldn’t
blow me off for the other guys, either. If we had plans, they
couldn’t get him to leave me. The same with them too. If he had
plans with them, I wouldn’t even think about asking him to stay
with me instead.

I often wondered, back then, why I
couldn’t hang out with the other guys too. Eventually they accepted
me though. It took a while, and Logan never told me why they’d
suddenly changed their minds.

My trip down memory lane was
interrupted when my Mom knocked on my bedroom door.

“
Chase, Logan’s here.” She said
through the wood.

My heart hammered in my chest as I
jumped from my seat.

“
Send him up.” I said as calm as I
could, grabbing my Black Veil Brides T-shirt and quickly pulling it
over my head.

It hung loosely, covering my ass. I
checked in the mirror.

All hidden away, just how I liked
it.

I wasn’t ashamed of my body. In
fact, I was in pretty good shape. Ten years of gymnastics had kept
me strong and flexible. However, when I’d
finally
started to blossom, at age
fifteen, I filled out almost immediately.

I’d had no boobs.

I’m not kidding. I even heard some
guys saying I should be called ‘Holland’ because I was so
flat.

So, one day, I had no boobs and
then the next… I started growing and didn’t stop for a while. I
went from nothing to having an impressive set of bad girls in less
than a month. Then, they continued to grow for a couple of months
after.

Logan hadn’t noticed. At least I
don’t
think
he
did. He never said anything and he never looked. I was just his
friend, nothing more.

As I stood and looked at myself in
the mirror, I rounded my shoulders to hide my boobs away. They were
huge.

“
Hey Chase.” Logan’s smooth, deep
voice came from the doorway, sending my nerves into overdrive. His
voice was so different from when we’d first met, obviously, and it
was seriously sexy.

He flopped down on my bed, as
usual, and picked up my pillow, placing it across his
lap.

I never understood why he did that.
He even did it in his own bedroom and with the throw cushions on
the sofa.

“
You know, you’re supposed to rest
on a pillow, not cover yourself with it.” I snorted a
laugh.

“
I know.” He said, looking slightly
embarrassed. “It’s just something I do.”

“
I know. If you’re cold you could
just pull my bed cover over you.”

I was glad he did that with my
pillow, actually. It always smelled like him when he put it
back.

“
I see you’re wearing your shirt.”
He smiled.

Logan had bought it for my
birthday, just before the beginning of the school year, and I had
bought him an ‘Asking Alexandria’ one for his. We had the same
birthday and got each other similar things. Our mutual love for the
bands ensured we’d have a good supply.

For Christmas, I was to get him
‘Black veil Brides’ and he was to get me ‘Asking Alexandria’.
Different artwork though.

I know it takes out the surprise,
but that first Christmas after becoming friends, we’d gotten each
other a band T-shirt and it stuck from there.

Logan smiled and unzipped his navy
blue hoodie, causing me to whimper internally. He was wearing his
shirt too.

I almost complained, out loud,
wanting him to take his jacket off completely when he zipped it up
again.

We were going out to watch
motocross racing.

No, it wasn’t illegal, or anything.
My Dad bought me two tickets so we could go to the race.

Even thought the weather was
getting warmer, and it hardly ever got cold enough for a thick
coat, there was a chill in the air and the dirt track would get us
muddy from last night’s rainfall.

Instead of wallowing in thoughts
that would never be, I turned into my closet and pulled out my
oversized dark red hoodie and put it on.

“
Ready?” Logan asked as I grabbed
my phone and keys.

Logan drove his
car the few miles to the race.

It had been set up way ahead of
schedule so that the bikers could practice. There were a few
dangerous turns, and the event organizers were worried about people
getting seriously hurt, or worse, because of the unusual wet
weather we’d had lately.

I didn’t mind the rain though,
because it meant that when we hung out, it was indoors and there
were just us. Unless we were at his house, and the other guys
showed up that is.

The bad thing, there, was that Matt
would sometimes make an appearance. He was just as arrogant as
ever, even after graduation and starting college.

“
Hey shortie.” He’d say to me and
not in an endearing way. It didn’t matter that when I’d start to
develop I’d had a growth spurt and was four inches taller within a
year. I went from five-two, to just over five-six. Even Logan had
still only been five-ten then. Now, he was six-two and towered over
me again.

When Logan and I were in the
kitchen, Matt would lean on his elbows, on the counter, with a
shit-eating grin and look me up and down. I don’t know why because
nobody else did. Guys, I mean. No guy ever gave me a second glance
but Matt.

Where I'm Calling From by Raymond Carver
Némesis by Agatha Christie
Good Girls Do by Cathie Linz
Revenant by Kilmer, Jaden
The Dominion Key by Lee Bacon
The Fox and her Bear (Mating Call Dating Agency, #2) by Lynn Red
Crossing the Line by Karen Traviss
All Was Revealed by Adele Abbott
Dollarocracy by John Nichols
Pinheads and Patriots by Bill O'Reilly