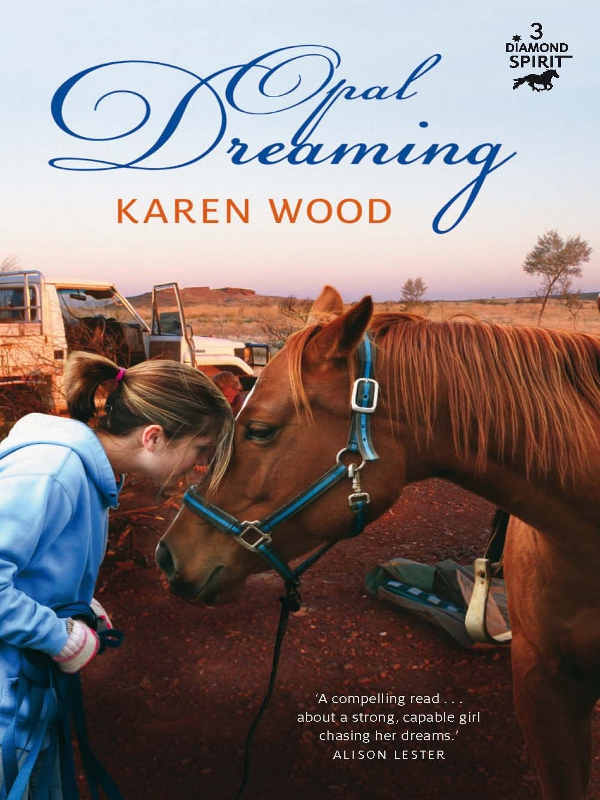 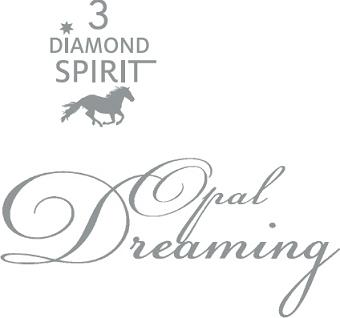 Cataloguing-in-Publication details are available from the
National Library of Australia
www.trove.nla.gov.au

For Linda and Graham Allen,

de facto family for so many people

âWOOHOO! '
JESS SLID DOWN
the front stair rail, her arms out wide, and landed expertly on the driveway. âToday's the day!'

For the first time in weeks, the sky was a clear blue, and the air was still, not a breath of wind. The sun was warm on Jess's face and everything about the day seemed perfect. She skipped to the feed shed, hauled out some hay and threw it over the fence. âCome on, Dodger, it's time to go and get Opal!'

Dodger nickered to her and began snuffling at the hay. Jess stepped through the fence and gave the old stockâhorse a big hug. âEighteen months we've been waiting,' she said, running her hands through his shaggy brown coat. âI can't
believe
I can finally bring her home!'

She took a brush to him, rubbing in hard circular motions as she talked. âOpal's a very special filly. She's connected to Diamond. You remember Diamond, don't you?'

As Jess rubbed Dodger's back, the old horse curled his lip with pleasure. She combed out his tail, painted his hooves with grease, and pulled her phone from her pocket to thumb a message.

U guys saddled yet?

Before she could send it, Jess heard a shrill â
Coo-ee!
' A clatter of hooves sounded along the road, gradually getting louder. From behind the hedge, she could hear her friends, chatting and laughing.

âI thought you'd have that old stockhorse saddled up by now,' Shara called as she rode through the gate on Rocko.

âDad brought me home for the weekend,' her best friend grinned.

Rosie followed on her quarter horse. âYou're back on the legend, Jessy!' she said, as she pulled Buster to a halt and jumped off.

Jess gave Dodger a pat on the neck. âI will be in a minute.' She picked up her new stock saddle and slung it over his back, pulled the girth through the rig and slapped the fenders down into place.

âAre you excited?' asked Grace, appearing on a leggy chestnut.

âI couldn't sleep last night,' answered Jess, as she reached for her bridle.

âHave you got a little halter for her?' asked Shara.

âWhat? All the way back to here without a halter?' Shara sounded mildly alarmed.

âProbably the best way. She's never been touched by a human, let alone had a rope on her,' said Jess. She pulled a face. â
Lawson's rules
.'

As part of the purchase agreement with Lawson, Jess had agreed not to handle Opal during her first six months. Lawson didn't like foals being mollycoddled by girls. He said it made them ârude and disrespectful'.

Shara snorted. âHe's such a killjoy.'

âNot for much longer,' said Jess. âAs soon as she's weaned, she'll be
mine
! I'll have three whole weeks to handle her before she goes out west to Longwood.'

âWish
we
could go on that trip,' said Grace.

Lawson had inherited a share in his father's grazing property, Blakely Downs, and was taking several horses, including a mob of brumbies, out there for a droving trip. Opal, together with the other young horses, would be turned out onto the station to fatten up on the Mitchell grass. The older horses would be put to work on the stock route, droving fifteen hundred cattle to the saleyards.

âMe too,' Jess sighed. âDroving would be so much fun.' She rammed a foot into a stirrup and sprang into the saddle.

âAre you leaving Opal's mum with her for a couple of days?' asked Shara.

âYeah, just overnight to get her settled, then Lawson wants to get Marnie back into work for the droving trip.'

âYou'd better look after her,' said Rosie. âDo you have any idea how much he paid for that mare?'

âMum reckons it was enough to buy a brand-new car,' said Grace.

âShe'll be all right,' said Jess. âLawson's been over and checked the fences to make sure she can't hurt herself.'

At that moment a low rumbling noise rolled through the valley, making the ground tremble.

âWhat was that?' asked Jess, looking up at the cloudless blue sky.

âLook, the sky's turning green over there,' said Shara, pointing beyond the mountains to the south. âIt's gonna be a doozy!'

Jess gathered her reins and kicked Dodger on. âLet's get going. We don't want to get stuck in it.'

The girls headed towards the river flats. As they followed a well-worn track to the crossing, they could hear thunder rumbling through the valley again.

âIt's coming up over the hills,' said Shara. âLook!' Behind Mossy Mountain, the sky was turning an eerie mix of green and purple. It suddenly flashed white with the afterglow of distant lightening. âWe're going to get drenched.'

âSo do I, but I hope it doesn't unsettle Opal while we're trying to move her,' said Jess.

âBut what if the river rises?' Jess squeezed Dodger into a trot. âWe might not be able to get her through. I couldn't handle having to wait until next weekend to bring her home.'

Dodger swished his tail and gave a skip with a hind leg. He broke into a canter. Jess led the girls down the riverbank and they splashed through the knee-deep water.

Shara cantered up on her shoulder. âCan't that old gerry go any faster?' she yelled, as she thundered past.

Dodger seized the bit and took off after Rocko, with Buster and Milly following closely behind. Jess gave him the reins and let him stretch his legs. It felt fantastic to be flying along on him again, his hooves making a loud melodic rumble over the grassy flats. She laughed into the wind and kicked him on.

Beyond the grassy flats at the Slaughtering Creek junction, the group reached Katrina Pettilow's place. Her horse Chelpie stood listlessly on a timbered hillside. When the little white mare saw the girls, she pulled a horrible face and charged at the fence.

âHave they weaned Tinkerbell already?' asked Shara, pulling Rocko back to a walk.

âAbout a month ago,' said Jess. âKatrina wanted Chelpie back.'

âDid she ever find out about Tinks?'

âNope. She didn't visit Chelpie once in six months.' Jess shook her head. Her friend Luke had used Chelpie to foster his orphan brumby filly when Chelpie had lost her own foal. The little mare had been a good mother, ferociously protective. âShe's done nothing but pace up and down that fence since Tinks was taken away from her. She looks terrible.'